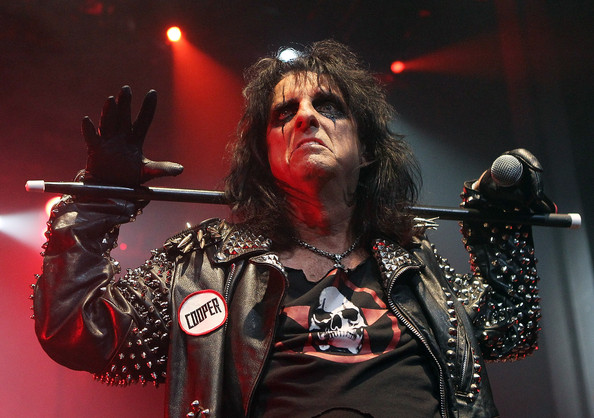 When Alice comes out to play, he often invites the audience to enthusiastically witness strangulations, beheadings, beatings, and stabings, but now, with the addition of his latest masterpiece, Brutal Planet (Spitfire), Alice opens up a new bag of bones (literally) as he tells his dark prediction of what the future holds…

While Alice entered the gates of the A.J. Palumbo Center (Duquesne University) kicking off his set with a live rendition of “Brutal Planet” and delivered new tracks like”Wicked Young Man,” “Gimme,” and “Blow Me A Kiss” early in the set, he did find time to include the anthems that make his “the greatest show on earth.”

In fact, he rocked the Catholic University without reserve for almost two hours along with his live band, which includes Ryan Roxie (guitar) and Eric Singer (drums), as well as Peter Friesen (guitar), Greg Smith (bass), and Teddy Zigzag (keyboards).

Highlights from the show included a medley of the new ballad of abuse “Take it Like a Woman” and his classic hit “Only Women Bleed,” during which Alice took a break from the imagery and showcased his vocal abilities. In addition, Cooper offered a new, industrialized version of “Feed My Frankenstein” that blended well with the mood set for the brutal underworld.

As always, classics like “Eighteen” and “School’s Out” and the encore of “Billion Dollar Babies” and “Elected” topped the set, especially with the humorous inclusion of Bill and Hillary Clinton impersonators. Though, it was disappointing to find that “Lost In America,” and “You’re My Temptation” from his 1994 studio release, The Last Temptation (Sony) were excluded, but with such an extensive collection, he can’t play everything.

Be sure to check out the master of shock rock this time around, it’s one show you won’t want to miss and unlike the KISS farewell tour, it won’t break the bank. And on November 7th don’t forget to cast your votes, Alice for president!