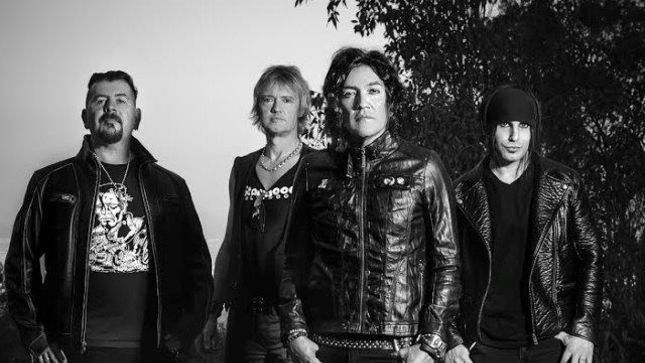 TPRS.com caught up with the Bulletboys (Marq Torien on lead vocals, Lonnie Vencent on bass, and Jimmy D’Anda on drums, and their new guitarist Jason) for a live show full of the hits that brought the band success in the late eighties and early nineties.

According to Vencent the reunion began when asked the others to play a show near Los Angeles at the Maverick semi-pro baseball stadium with Great White a couple of years ago.

“The chemistry was so overwhelming that it got the band back playing shows, but Mick was still doing his own thing and has a wife and a baby so he chose not to do this run and only wanted to do weekend stuff. So, that’s why Jason is in the band now.”

Before Sweda’s departure, the original four had played scattered shows locally and on weekends and recorded their Greatest Hits album for Cleopatra, which Vencent describes as “quick and easy and fun.we just went in and recorded the band live — in the studio though — without fans.” He says that they ran through the set and then went back and fixed it up a little bit and added some background vocals, but for the most part, it was their live show.

But, in all honesty, the album simply can’t compare to the performance that was seen at their live performance at the Flying Machine. Though the crowd was scarce (which seams to be a pattern with this club) their show totally rocked. The raw energy, heavy rhythms, guitar hooks, and the sexy groove of vocalist Marq Torien brought back memories of when MTV aired videos and metal ruled.

Their performance included familiar melodies like “Smooth Up,” and “Hard as a Rock,” as well as the bluesy rockers, “Talk to Your Daughter” and “St. Christopher,” from their second album, Freakshow.

Other highlights included an incredibly up-tempo version of the pop tune “Something Good,” which can also be found on their Greatest Hits album, as well as an excellent selection from their third studio release, ZAZA, “When Pigs Fly.”

Once the boys return to Los Angeles and play their homecoming with their new guitarist, they are going to be writing material for their next studio album, and going after a major deal.

Vencent Says, “Were looking forward to going in and doing a real studio album, because the last one wasn’t a real studio album. It’s just a live version with the breakdowns and things that we do out on the road, you know, for the live show.”

Vencent also says that they aren’t going after a particular sound for the next album. “We just go for the ideas that groove the best and try to add some great melodies and we’ll see where the chemistry with the new guy takes us.” If their live show is any indication of what’s to come, someone should surely take notice.

The Official Breakdown: 1988 – The original members Mick Sweda, Lonnie Vencent, MarqTorien, and Jimmy D’Anda signed with Warner Bros., and released their self-titled debut album and then their second album, Freakshow.

1993 – After the band’s third release, ZA-ZA, Sweda and D’Anda left the to pursue “solo” careers.

1995 – With only half of the original member intact, the Bulletboys took a departure from their original sound, and released their fourth album Acid Monkey. Then, Vencent and Torien choose to take a break from the band due to the popularity of grunge, and played in other bands, Vencent played in a punk band called Ham Sandwich, and Torien played guitar and sang for a band that Vencent calls “kinda Nirvanaish.”

1998 – Rock was starting to come back, and the boys joined the Hard Tour, which unexpectedly ended when Pretty Boy Floyd and Bang Tango chose to go home. After that, the original four reunited and recorded the Greatest Hits album for Cleopatra.

2000 – Now, Marq Torien, Lonnie Vencent, and Jimmy D’Anda are joined by their new guitarist Jason, who will be playing on the band’s upcoming studio album.

For More Information Keep your eyes open for an official Bulletboys Web site, which will be coming soon. And for those who are wondering what Sweda is up to, he told TPRS.com that though he has finished his commitments to the BulletBoys and will not be touring with them, he’ll miss it. He also said, “I’m working in the studio on my own project (www.monstersmakingmusic.com) and will be doing some LA shows.”