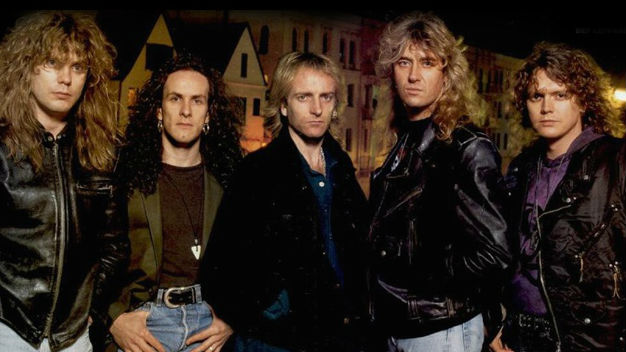 Def Leppard is one of the many bands that got huge in the eighties, experimented, and then came back to their roots. Despite internal tragedy and external roadblocks, the band has always played on and remained successful. Perhaps it is because they are one of the few leaders, who will always be in a league of their own, keeping company with bands like KISS, Aerosmith, Led Zeppelin, and AC/DC.

Their latest release Euphoria (Mercury) was first tested out on crowds at festivals and state fairs last summer, and has now brought them full force into a summer tour at large amphitheaters and arena-sized shows.

Though Def Leppard has returned to the sound that earned them several top slots on the pop charts and released several singles, many still haven’t made it into their live set, namely “21st Century Sha La La Girl” and “Goodbye.” And surprisingly the 1999 answer to “Pure Some Sugar on Me,” “Demolition Man” has also been scratched from the list. In their place are the surprise hit that started as a b-side, “Paper Sun,” and “Promises.”

The big plus, however, is that the set list has really been revamped since their jaunt last summer, separating the band from those who are only playing greatest hits shows in hopes of keeping the audience’s interest. Their set now includes acoustic versions of “Two Steps Behind” and “Bringin’ on the Heartbreak,” as well as a few surprises from Hysteria, namely “Excitable” and “Gods of War.”

In addition, the band delivered most of the singles from Pyromania , Hysteria, and Adrenalize, including all the “rock” anthems: “Rock of Ages,” “Rocket,” “Rock Rock (Till You Drop),”and “Let’s Get Rocked.”

Other interruptions from the norm included a cover of Sweet’s “Action” and a crowd-pleasing -energetic delivery of the sole survivor from the album that strayed, “Slang.”