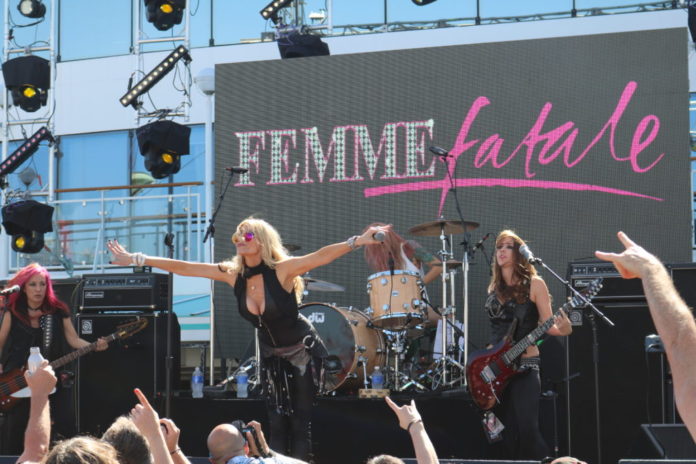 The afternoon sun was blaring on the Norwegian Pearl pool deck for the 2016 version of Femme Fatale on the 3rd day of the Monsters of Rock Cruise – Monsterwood.  The band is still fronted by Lorraine Lewis and currently features Athena Lee (sister of Motley Crue drummer Tommy Lee) on drums, Katt Scarlett on keyboards, Courtney (Iron Maidens) on guitars and Janis Tanaka (Winterthrall, Pink, Hammers of Misfortune) on bass.  Guitarist Nita Strauss (Iron Maidens, Alice Cooper) was not with the band on the cruise.

Vocally, Lorraine sounds (and definitely looks) as good as she did with the original version of Femme Fatale and the classic hits such as “Falling in and Out of Love”, “Back in Your Arms Again” and “Waiting for the Big One” still hold their original appeal without sounding dated.  The “new” material, which comes from the recently released Femme Fatale 2nd album was great to hear live.  “Lady in Waiting” and “One More For The Road” fit in perfectly with the rest of the set.

Falling in and Out of Love 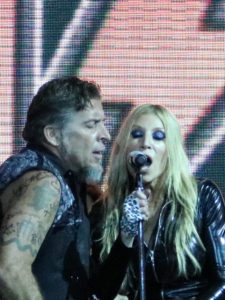 Femme Fatale also played the final show in the Atrium on the final night of the Monsters of Rock Cruise.  Joining the band on stage were several guests including a dinosaur and Lorraine’s brother, guitarist Rick Ruhl, who was an original member of Femme Fatale.  In all, it was a fun way to end the cruise for everyone who attended the show.