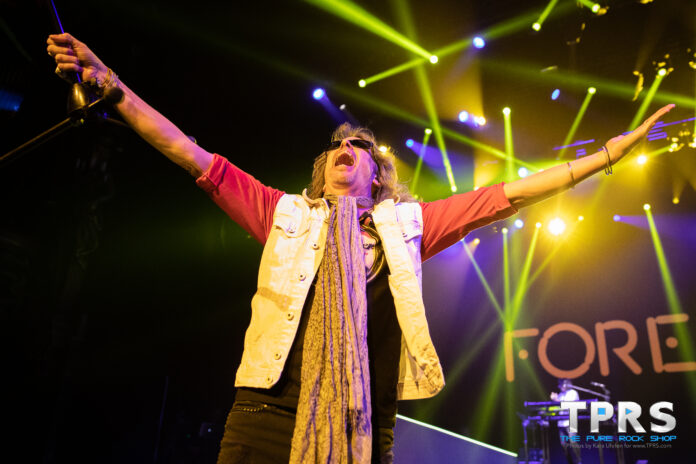 It’s been about four years since I’ve had a chance to catch Foreigner live.  A long time, given that I sometimes see them play more than once in a year, but the pandemic left anything remotely close to home cancelled or postponed.  So, finding out that they were playing in Vegas on a weekend I’d already planned to visit, was a real treat! I was excited to cover the show, and hoping that my flight would arrive on time (wearing my “Dirty White Girl” shirt on the plane just in case I had to rush to the venue with luggage in hand).

But I just got lucky, arriving in plenty of time to shoot Foreigner as they kicked off their residency at the Venetian on Friday, March 25th with the energy and precision I’ve come to love from this band.  They have a new addition Luis Carlos (Train, Glen Hughes) handling guitar duties along with Bruce Watson (and sometimes bass as you can in the shot below), Jeff Pilson (Ex-Dokken, The End Machine, Black Swan) remains the main player on bass, Chris Fraizer is on drums, Michael Bluestein is on keyboards, and the legendary Mick Jones joined the band for about half of their performance. 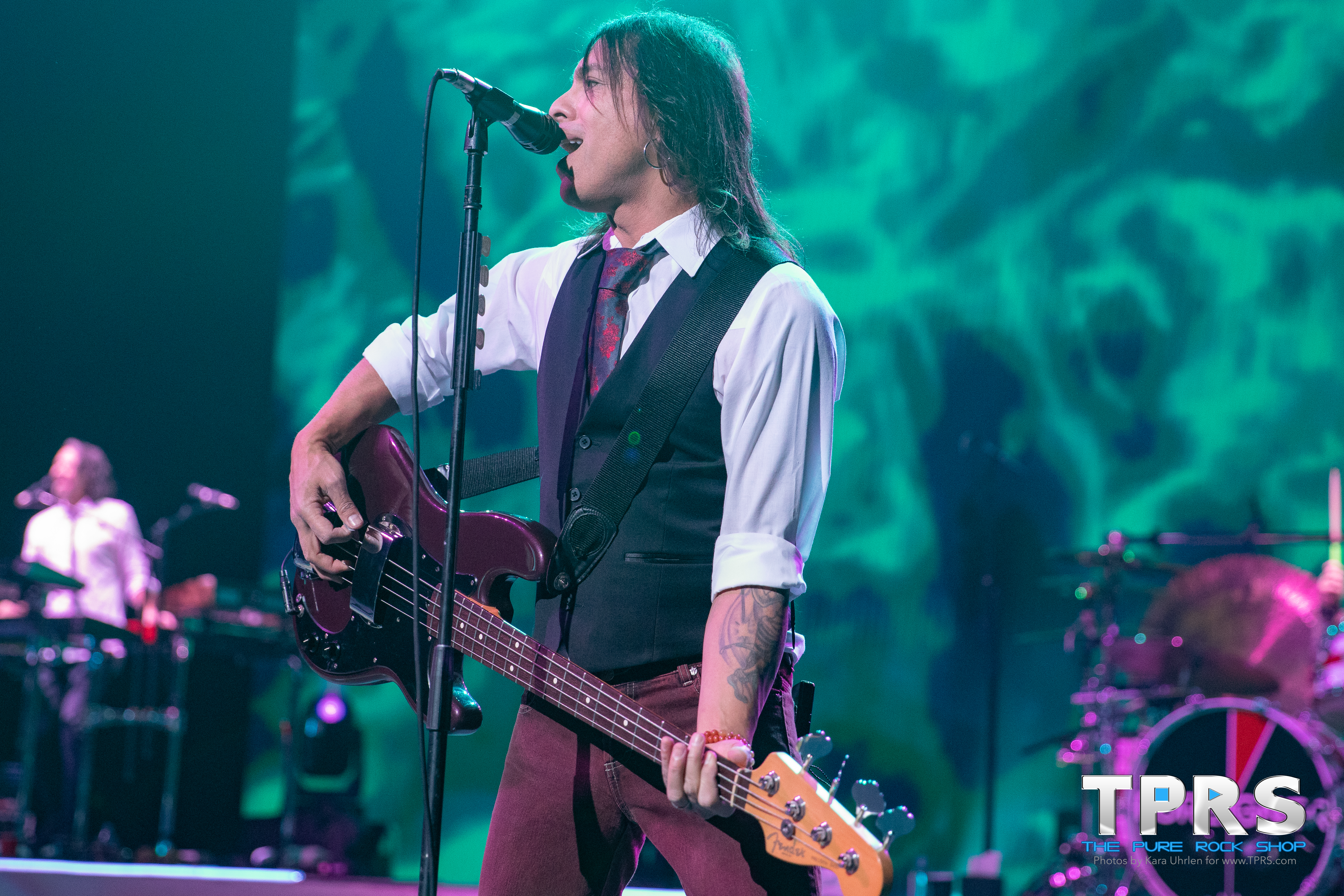 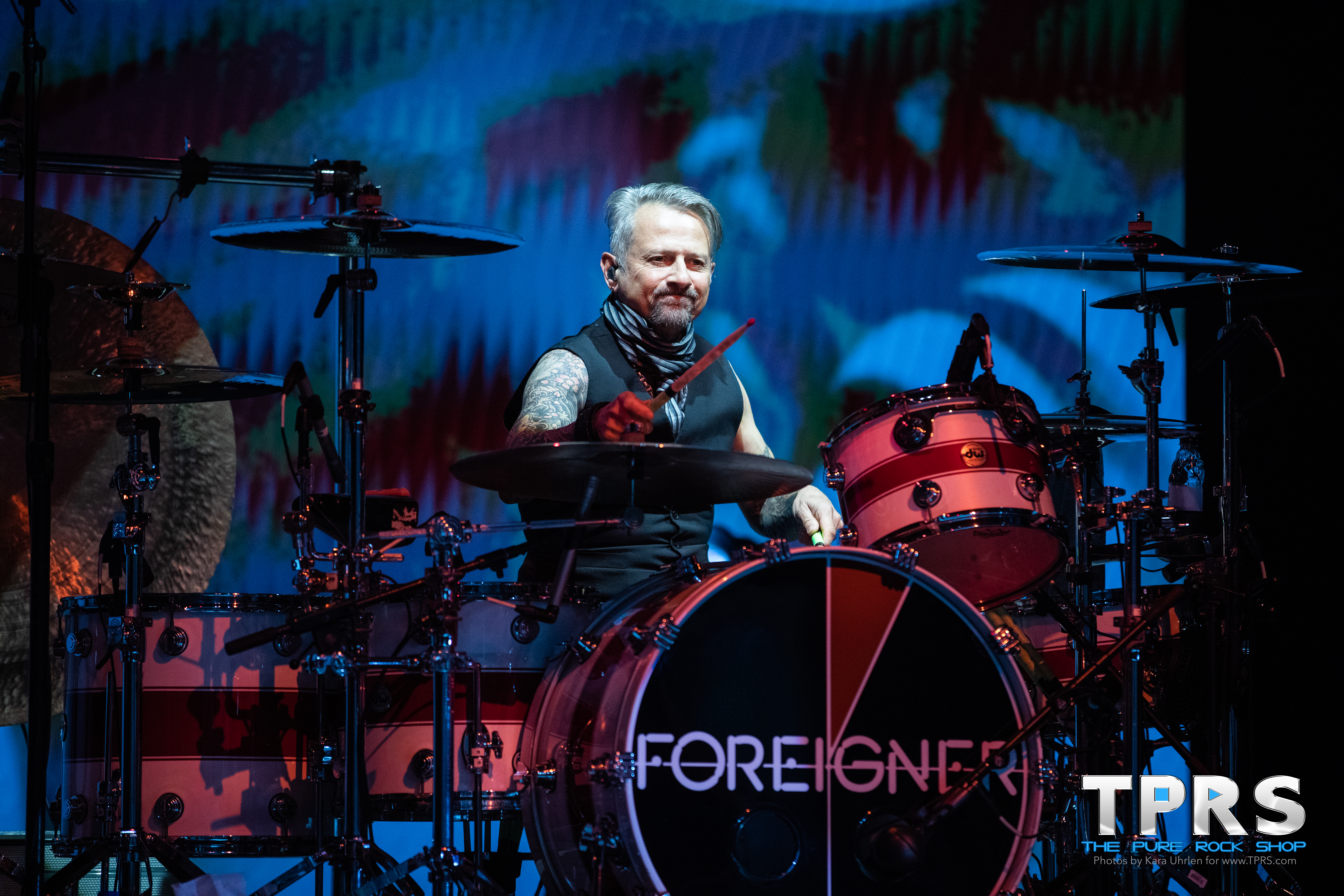 I was surprised to see Thom Gimble, the band’s longtime sax player was not on stage.  Instead Michael Bluestein covered the sax parts jamming away on a hand held “keytar” synthesizer.  I later learned that Thom left the band about a year ago, after some 30 years of performances, and had posted a heartfelt message of thanks to the band on social media with intentions to “stop touring” and “settle himself down.” 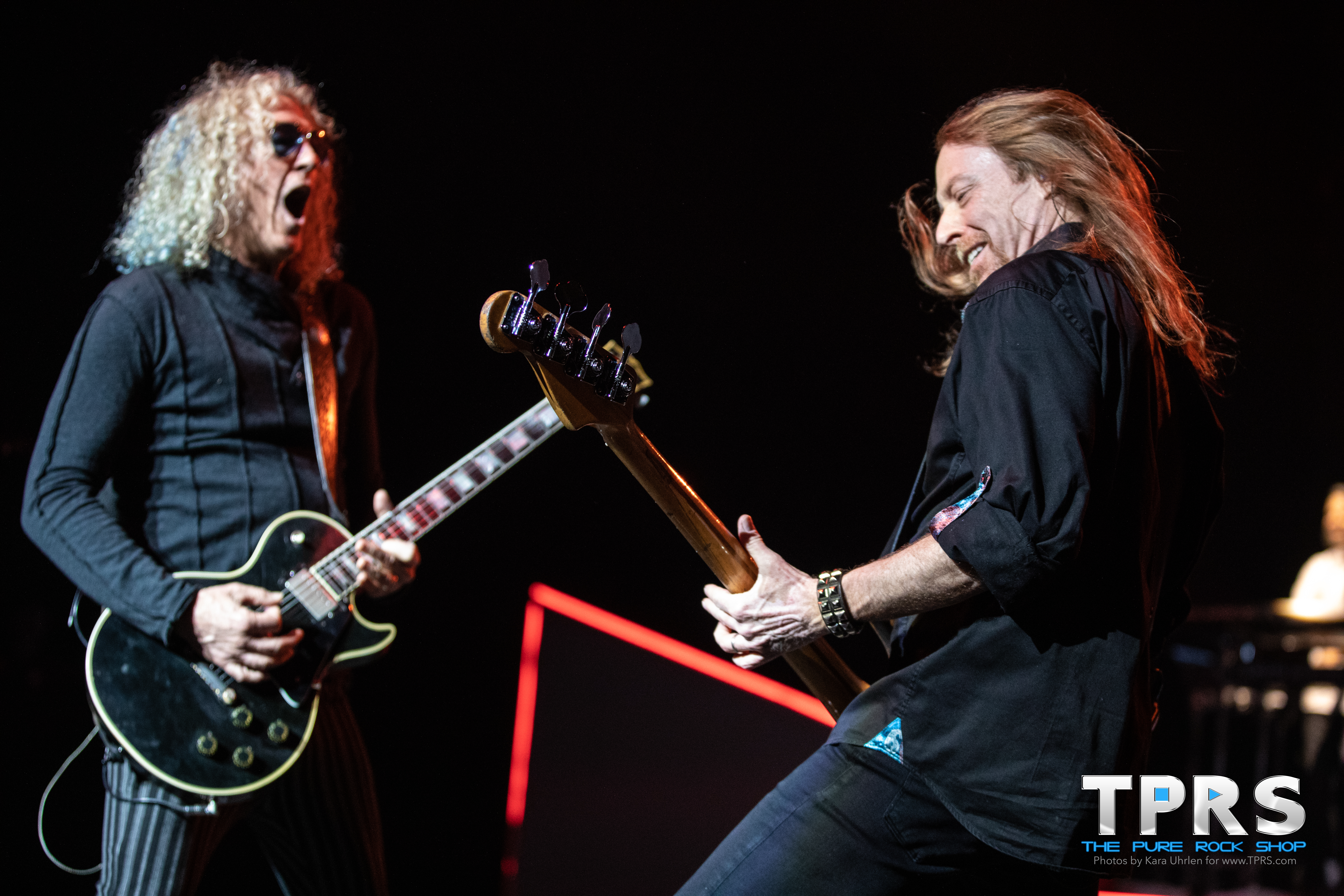 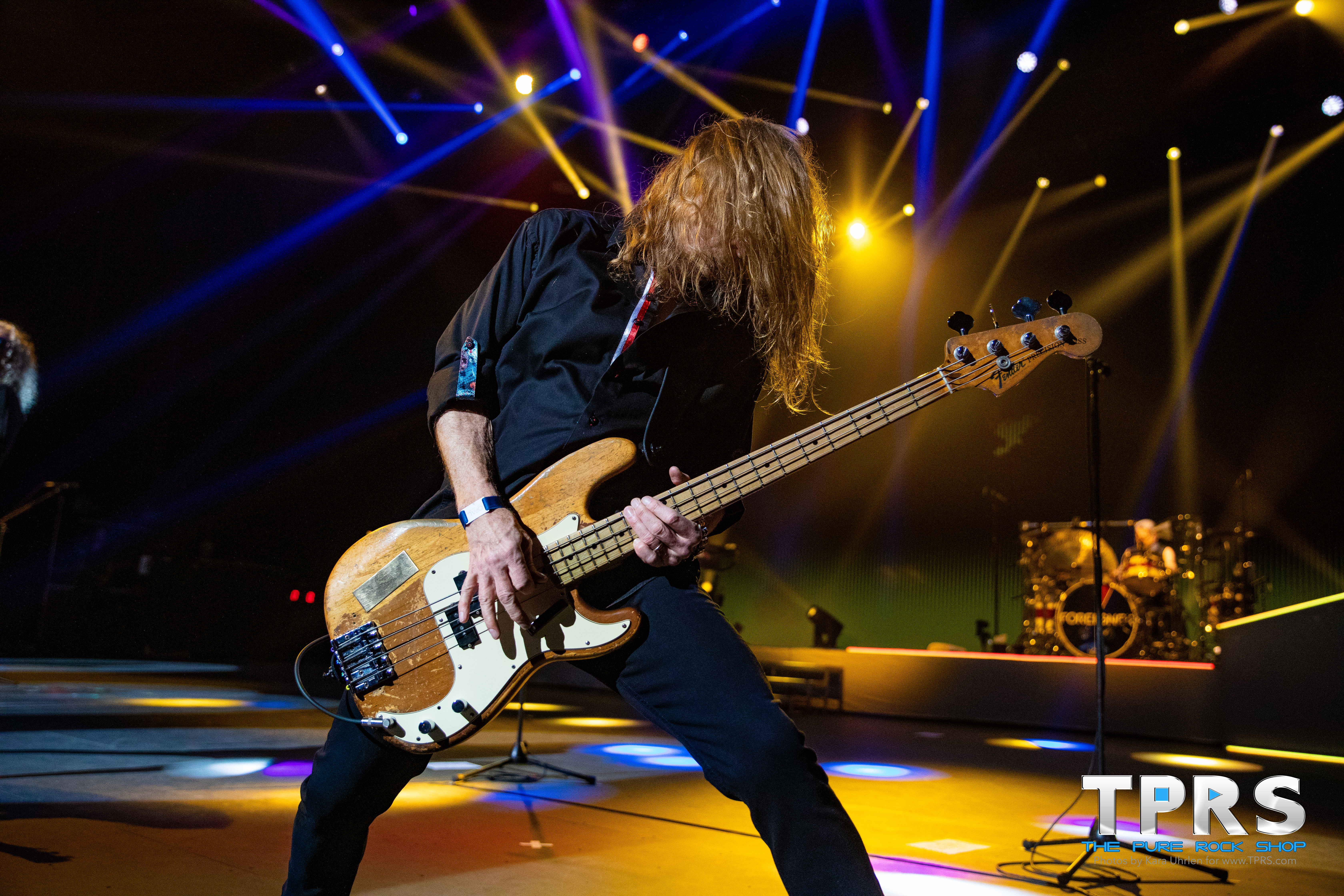 The venue was theater-sized holding a sold-out crowd of a few thousand, like many of the places I’ve seen Foreigner before, but the stage was insanely deep with keyboards and drums so far away from the audience that it felt somewhat disconnected.  I’m guess the distance was even more noticeable in the back of the venue than from the front row.  In fact, I’d even noticed a microphone pointing towards the crowd in font of Jeff, and wonder if it was set up to ensure that Michael and Chris could hear our cheers?  But as predicted, Kelly Hansen didn’t worry about keeping his distance from the crowd, he made one of his regular visits running down the aisles and taking in their applause, much to the crowd’s delight.

The band kicked off a twelve song set with “Double Vision” and broke for a killer keyboard and drum solo before delivering a killer rendition of “Jukebox Hero.”  Then, they introduced the man who brought us all this amazing music, Mick Jones, who joined them for the duration of the set, including an encore of “I Want to Know What Love Is” and “Hot Blooded.” 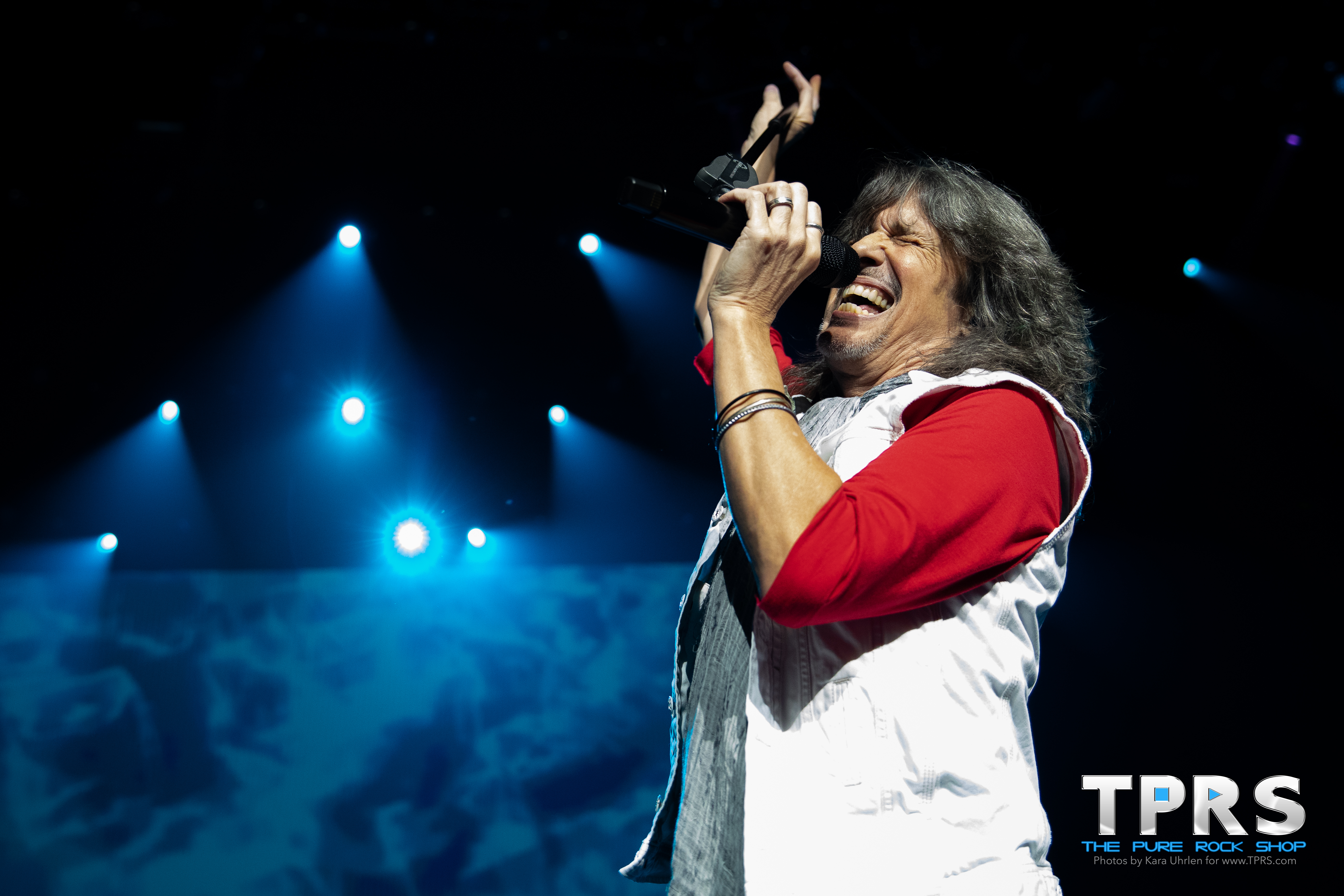 You can find more Foreigner coverage including interviews with Jeff Pilson in our archives, and coverage from the Skid Row show with the Scorpions at Planet Hollywood the following day.

Follow us @ThePureRockShop on Facebook and Instagram for more local show coverage including Dragonforce at the Roxian Theater on April 8th which will include a scheduled interview with Firewind’s Gus G., as well as festival coverage including the Monsters of Rock Cruise,  upcoming M3 Music Festival this May in Baltimore, and Masquerade in Philadelphia in July.