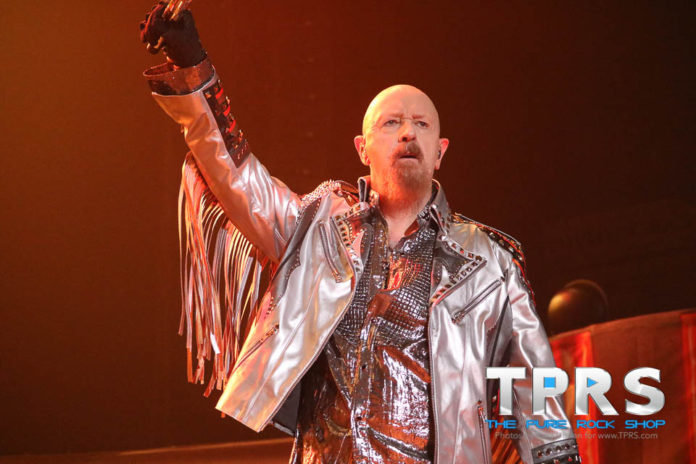 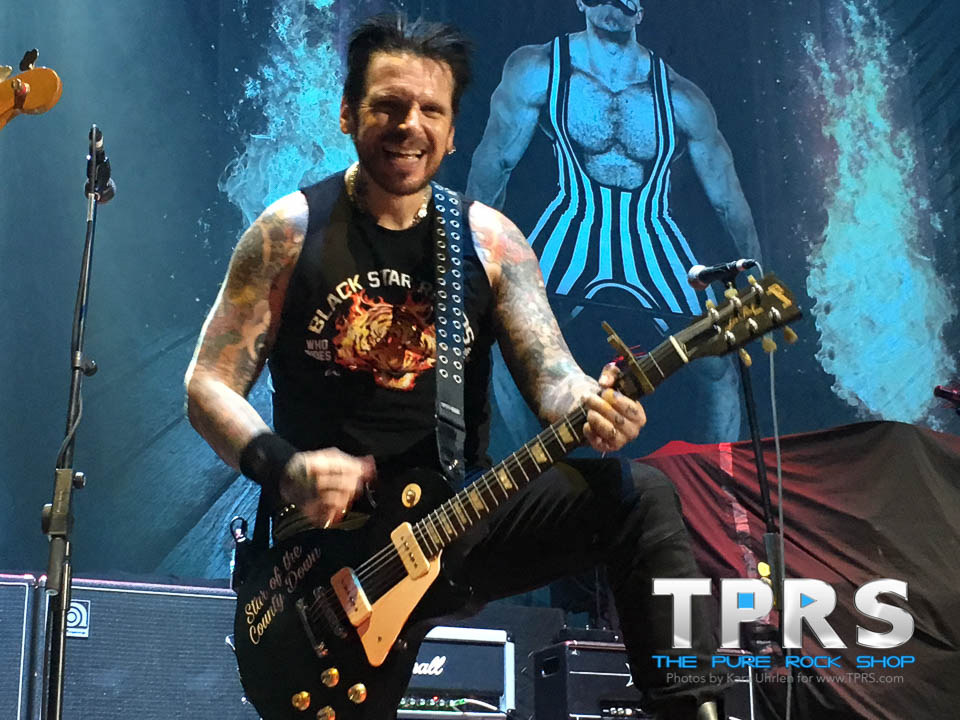 Many of those in attendance the at Covelli were unaware of the pedigree of the Black Star Riders, who feature Thin Lizzy guitarist Scott Gorham, Ricky Warwick from the Almighty, Damon Johnson from Brother Cane and Robert Crane from Ratt as well as L.A. Guns.

Opening with “All Hell Breaks Loose” from their debut release the band then went into “Bloodshot” where the connections to Thin Lizzy become all the more obvious.  Phil Lynott’s influence on the vocals of Ricky Warwick are immediately apparent and show his admiration for the late Irishman’s talent.

Tonight, the Black Star Riders sounded much heavier and grittier than past performances of the band we have attended.

“The Killer Instinct” from the same-titled album tore through the crowd with the energetic Warwick running around the stage while the reserved Gorham riffed away with a cool, subtle swagger.

“The Boys Are Back in Town” struck an immediate nerve with the crowd who were not very familiar with the Black Star Riders, winning over a significant amount of the audience.

Black Star Riders closed with the raccous “Bound for Glory” from their 2013 debut.  For those who never saw BSR before, they received an immediate education in the new wave of classic rock.

Black Star Riders Setlist:
All Hell Breaks Loose
Bloodshot
Heavy Fire
The Killer Instinct
When the Night Comes In
The Boys Are Back in Town (Thin Lizzy cover)
Kingdom of the Lost
Bound for Glory 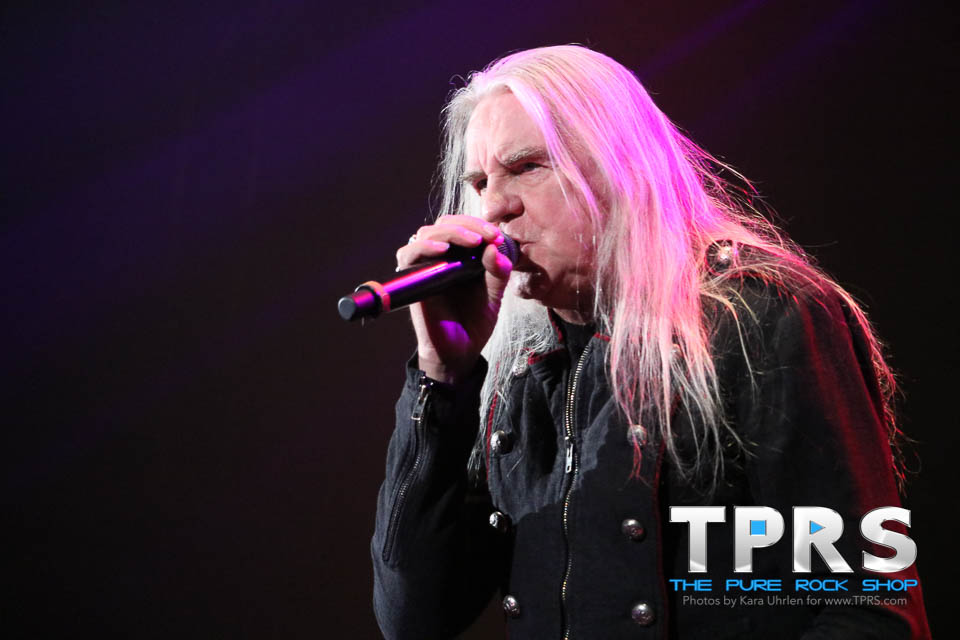 Legendary British NWOBHM heavy metal band Saxon was next to hit the stage.  Leading off with the title cut from their latest album release “Thunderbolt”.  Lead vocalist Biff Byford had the crowd in the palm of his hands from the start as the majority of the audience was standing for the entire set. 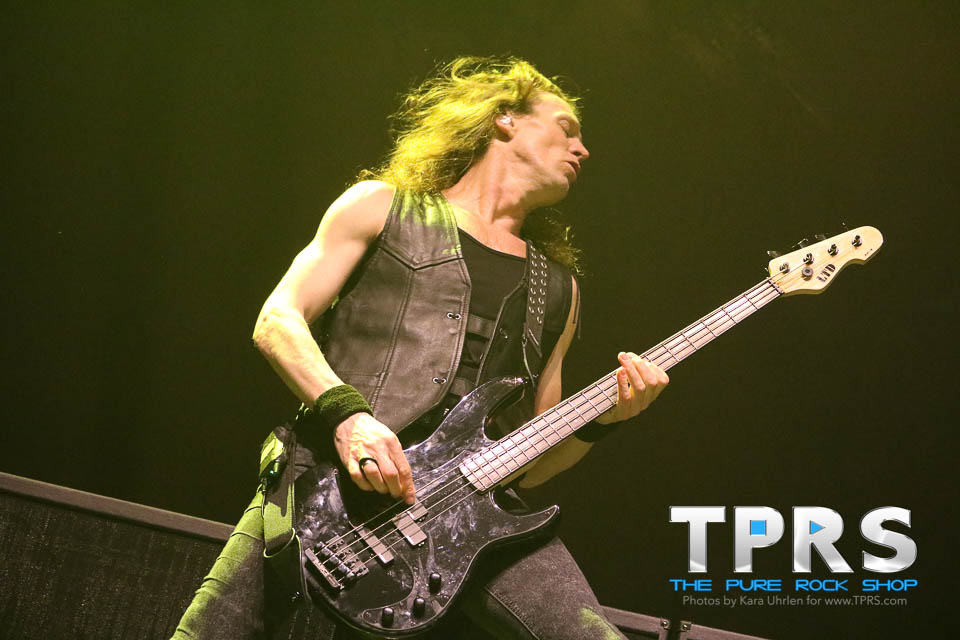 Saxon did a great job of mixing their classic songs with four new tracks.  “Power and the Glory” sounded as majestic as ever leading into another killer new track in “Nosferatu (The Vampires Waltz)”.

Speaking of the new tracks, in addition to “The Secret of Flight”, Saxon played their awesome new ode to their long time friends and touring mates the late Lemmy and Motorhead entitled, “They Played Rock and Roll”. 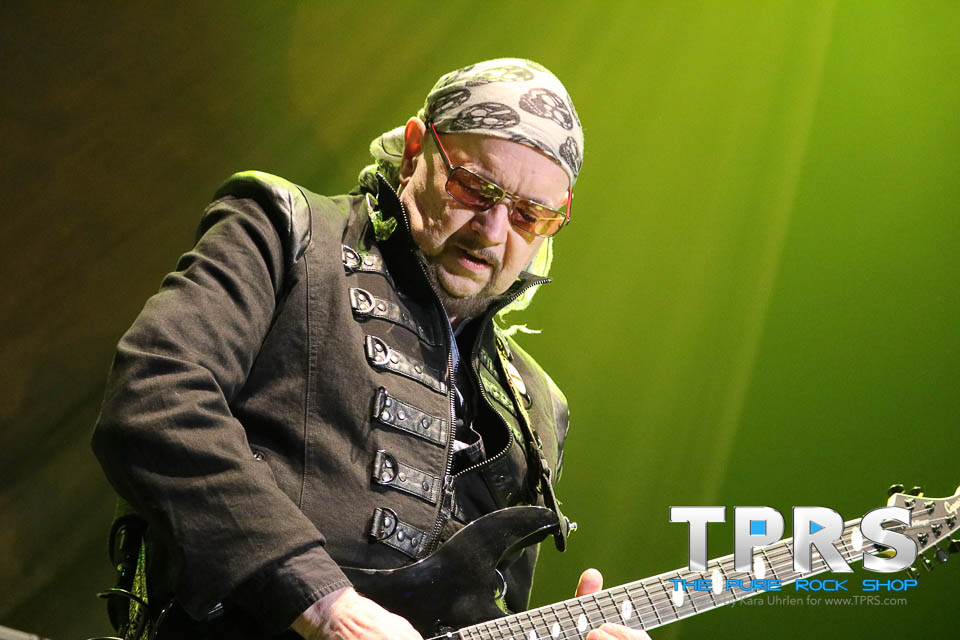 Saxon delivered 3 more classic tracks to close the set in “Crusader”, “Princess of the Night” and finishing with “Denim and Leather”.  Traditionally, Biff asks for a denim vest and leather coat from the audience to wear and this evening was no exception. 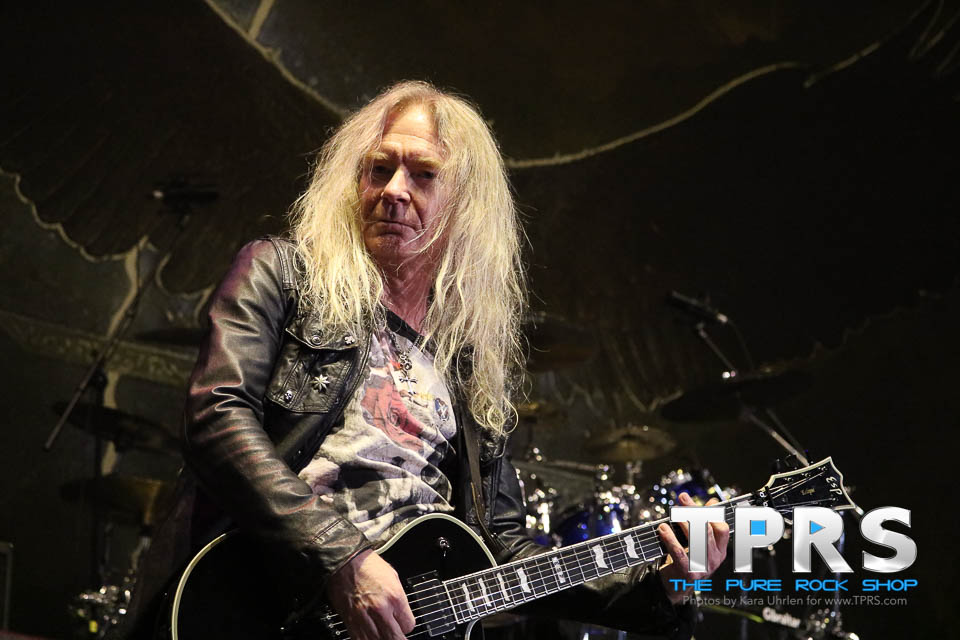 It great to see Saxon in the United States treated like the legends they are.  These Warriors of the Road are part of a dying breed of traditional metal bands still able to perform at a high level of intensity, musicianship and vocal prowess.  Legends indeed!

Saxon Setlist:
Thunderbolt
Power and the Glory
Nosferatu (The Vampires Waltz)
Motorcycle Man
The Secret of Flight
Dallas 1 PM
They Played Rock and Roll
Crusader
Princess of the Night
Denim and Leather 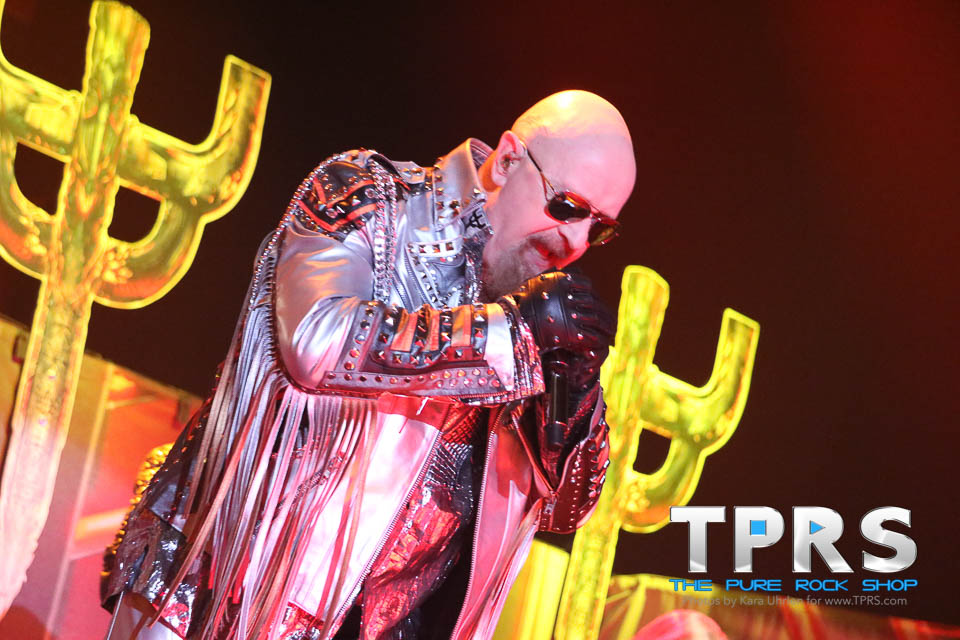 Immediately dipping into their extensive back catalog, the band ripped off “Running Wild”, “Grinder”, “Sinner” and “The Ripper” in rapid succession before unleashing their latest single, “Lightning Strike”.

For those of us who actually like the often-controversial “Turbo” album, “Turbo Lover” was a welcome song in the set followed up by the subtle “Angel” from the “Angel of Retribution” album. 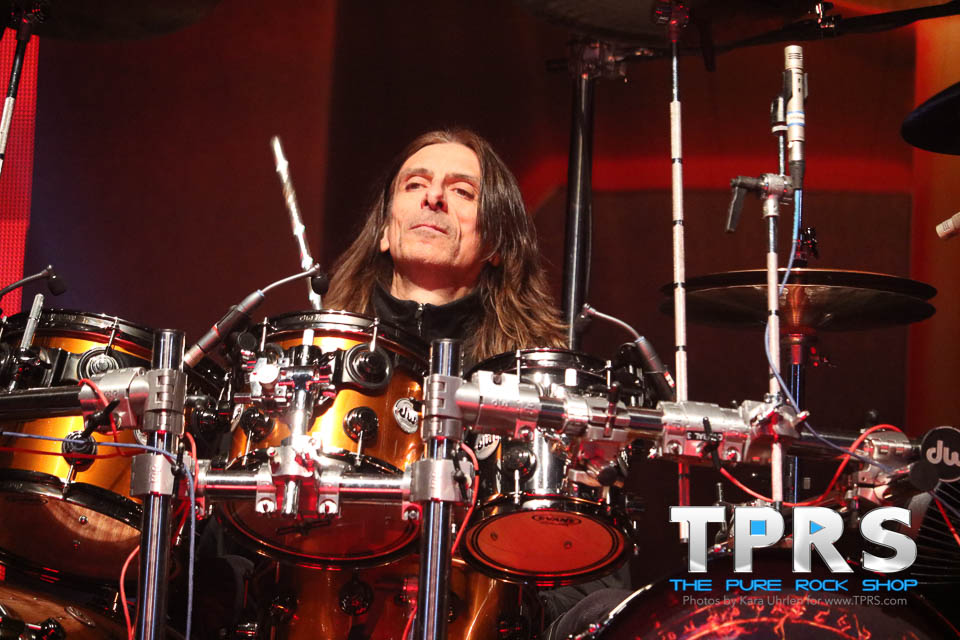 We noticed that during the first half of the set Richie Faulkner played more lead and then Andy Sneap later in the set.  While some people may complain about the lack of K.K. Downing and Glenn Tipton being with the band, Faulkner and Sneap are definitely amazing guitarists who are respectful of the original interpretations of the songs. 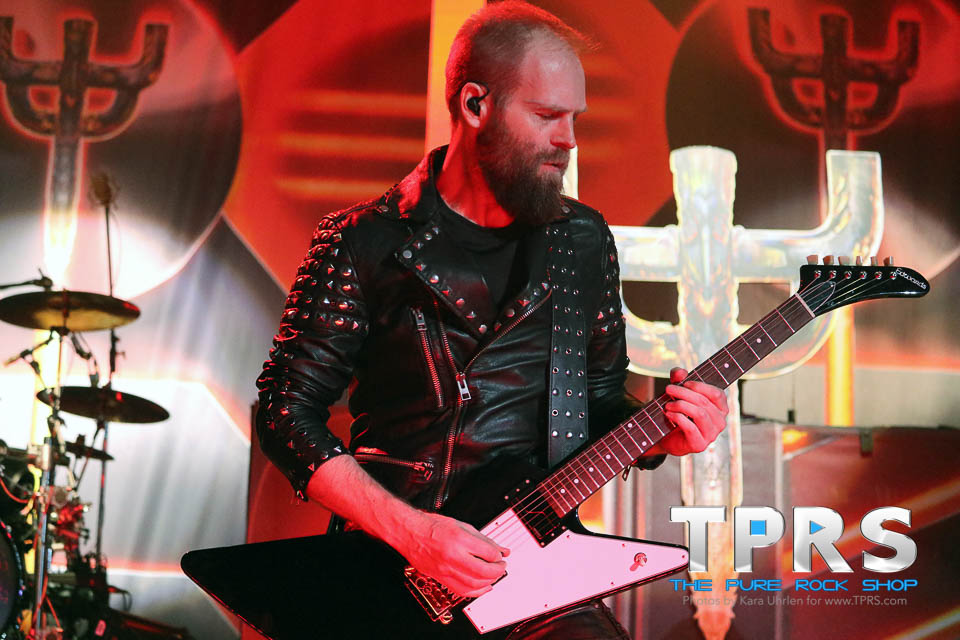 The second half of the set leaned heavily on the FM radio standards the band is best known for including, “Breaking the Law”, “Hell Bent for Leather”, “Electric Eye” and finishing out the show with, “You’ve Got Another Thing Comin'” and “Living After Midnight”.

Rob Halford still retains the crown of “Metal God” with his vocal performance.  Yes, he does use a teleprompter, but this in no way takes away from the show.  Both in their mid 60’s, Rob Halford and Saxon’s Biff Byford are living proof you can still pull off amazing vocals taking care of yourself properly.  Overall, a sensational triple bill! 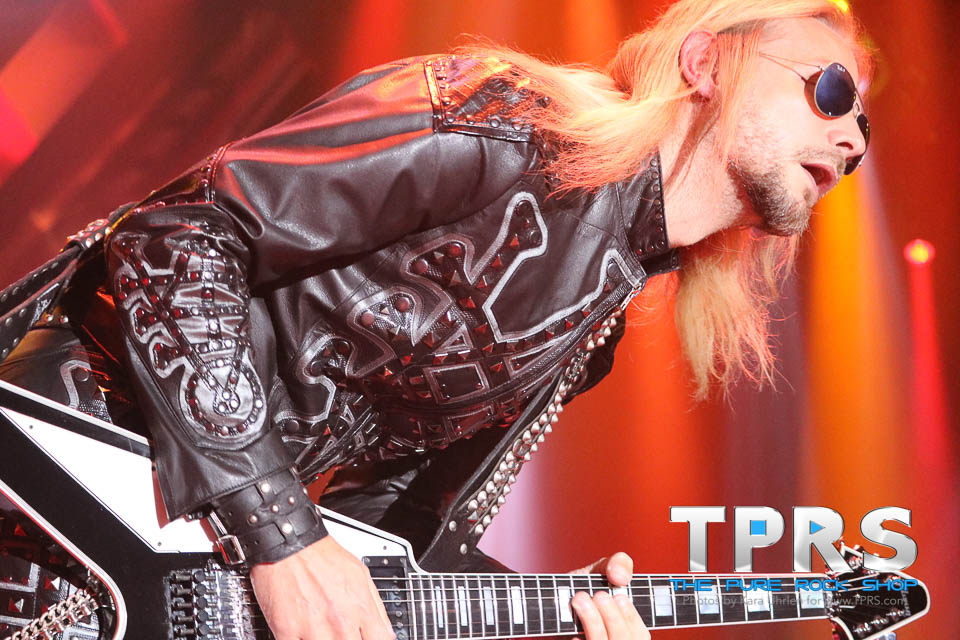 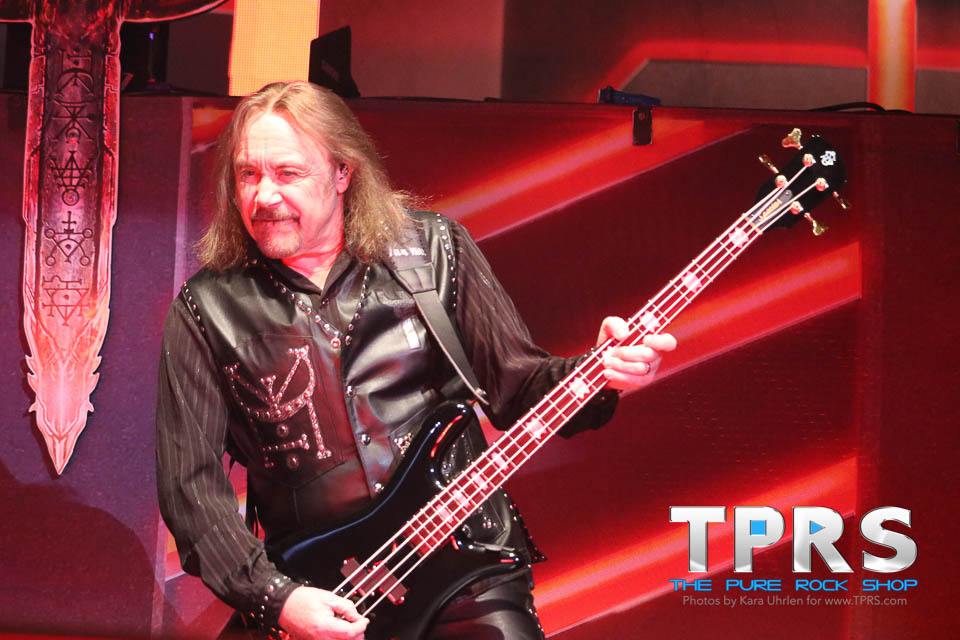