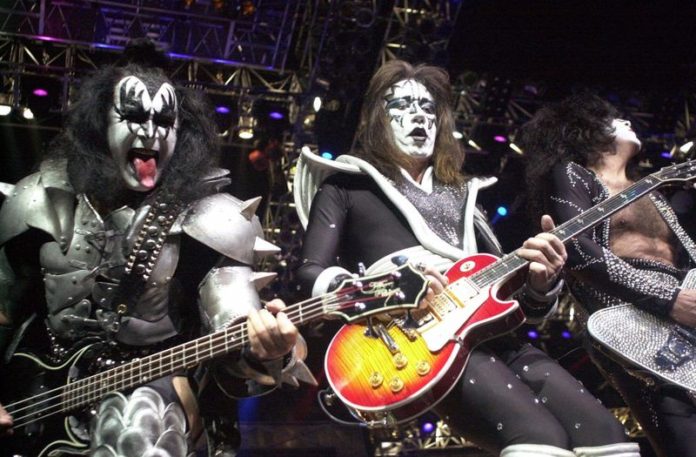 They are calling it Skid Row, but I’d like to call it Snake and Scott’s Monkey Business. Sure, bands that have been around for decades play the circuit of county fairs and rib cookoffs with only one or two original members, and nobody knows the difference…But with Dave “The Snake” Sabo and Scotti Hill reuniting and calling themselves Skid Row, the idea certainly raises a few questions. One, was raised but not answered by their new vocalist John Solinger, “Where is Rachel Bolan?”. And nobody bothered answering the question, “Where is Sebastian Bach?” or even mentioning that Solinger is his replacement in this new version of Skid Row.

For those who are wondering, Bach has just finished his US tour in support of his solo album, Bring ‘Em Bach Alive, and is gearing up to star in Jekyll and Hyde on Broadway this summer replacing singer/actor Jack Wagner. As for Rachel, it seems that he had been touring with them, but was missing in action at the Columbus show. So instead of dueling guitars, onlookers witnessed the frequent switches of bass duties by Sabo and Hill. And as for their new drummer, your guess is as good as mine, because they didn’t bother to introduce him either.

The boys did deliver a set that pleased the audience. It included hits like “18 & Life,” “I Remember You,” and “Monkey Business,” and they were even applauded with a standing ovation after finishing things off with the anthem of the metal generation, “Youth Gone Wild.”

The Motor City Madman, Ted Nugent, hit the stage dressed in zebra stripes from head to toe, joined by Tommy Aldridge (Whitesnake) on drums and his blood brother, bassist Marco Mendoza.
With political talk and his screaming guitar, Nugent – fifty one years clean and sober – delivered rock mainstays like his Motown classic, “Cat Scratch Fever,” as well as “Free For All,” and “Stranglehold.”

Nugent then invited the audience to participate in his tribute to “all the pieces of sh*t trying to destroy America,” a song entitled “Kiss My Ass,” from his 1995 album, Spirit of the Wild.

Other highlights included “Wang Tang Sweet Pootang,” and the hunt of the “Great White Buffalo,” where as always, Nugent ended the set with a bow-shot flaming guitar, ending his hunt and his performance.

Starting the set off with “Detroit Rock City” and ending the show the only way they can, with the ultimate anthem, “Rock and Roll All Nite,” KISS delivered hits old and new with a lit up backdrop of neon lights, flames, fireworks, and everything in between.

Decked in seven inch leather heels, a studded cod piece, and of course, their makeup, Gene, Paul, Ace, and Peter served up classics like “Cold Gin,” “Love Gun,” and “Do You Love Me.” Gene and Paul even added a few from their unmasked days like “Heaven’s on Fire,” with Bruce Kulick and the late Eric Carr, and even gave up the spotlight for Ace to sing both “2000 Man” and “Shock Me” and for Peter’s encore with “Beth.”

Other highlights included the namesake of their latest, “Psycho Circus,” as well as “God of Thunder,” “Black Diamond,” “100,000 Years,” “Firehouse,” and big screen video footage that led fans through the years of the hottest band in the world.