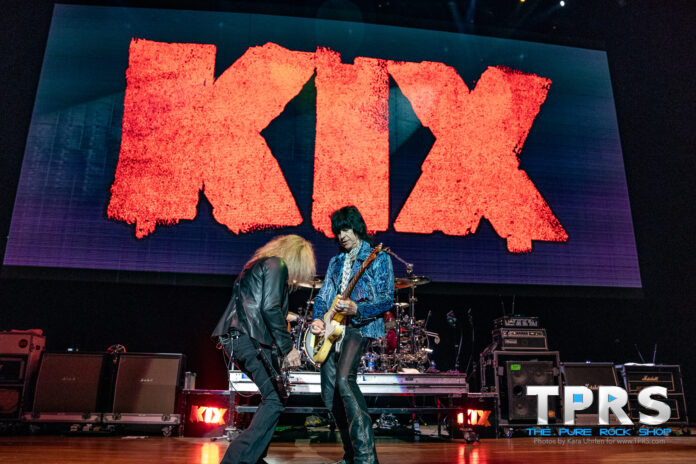 M3 Rock Festival kicked off on Friday evening with a VIP performance from Count’s 77, featuring Danny Koker of the popular television show Counting Cars.  We didn’t arrive in time to catch their five-song set, but found it interesting that his band featured Britny Fox frontman Tommy Paris on keyboards.  In fact, Friday’s line-up included two alumni from the Philadelphia-bred glam band, with drummer Johnny Dee performing with Doro later that evening.

It was a dreary day, rainy and cold, and as Steve Whiteman noted, if he were a fan, he probably wouldn’t be there, but the bands played on and the fans showed up.  There may have been lots of green showing out on the soggy lawn, but the Pavillion was packed by the time headliners KIX hit the stage.

As the general admission crowd took their seats, Lizzy Borden took the stage with buckets of blood prepared to christen willing participants.  The band featured Lizzy Borden on Lead Vocals, returning member AC Alexander on Guitar along with Brandon Paul, Joey Scott on Drums, and Colton Seaver on bass.

While brief, their set was riveting, kicking off with “My Midnight Things” and “Master of Disguise” and including a Ramone’s cover of the popular “Pet Semetery” from the Stephen King movie adaptation of the same name.  From feathers and sequins to masks and blood, it was hard to take our eyes off of Lizzy Borden throughout the theatrical performance. 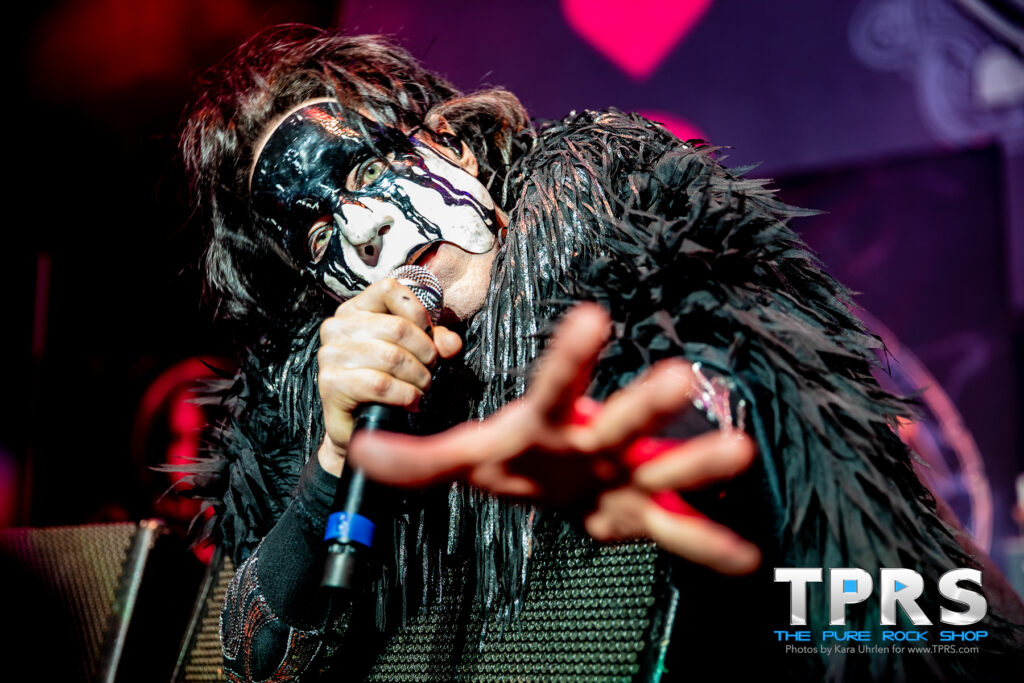 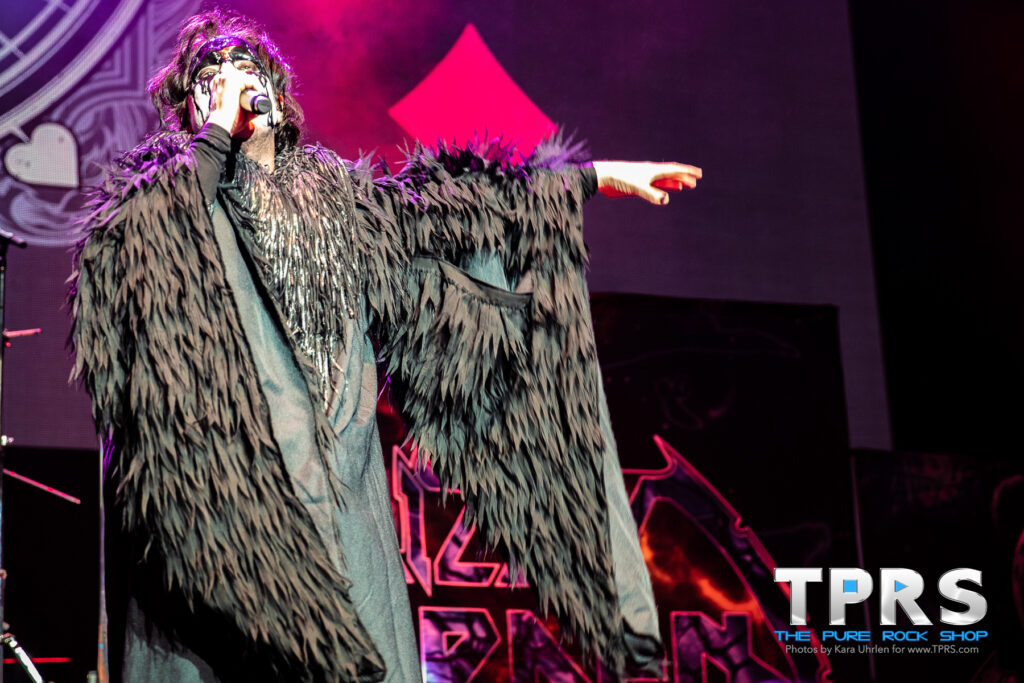 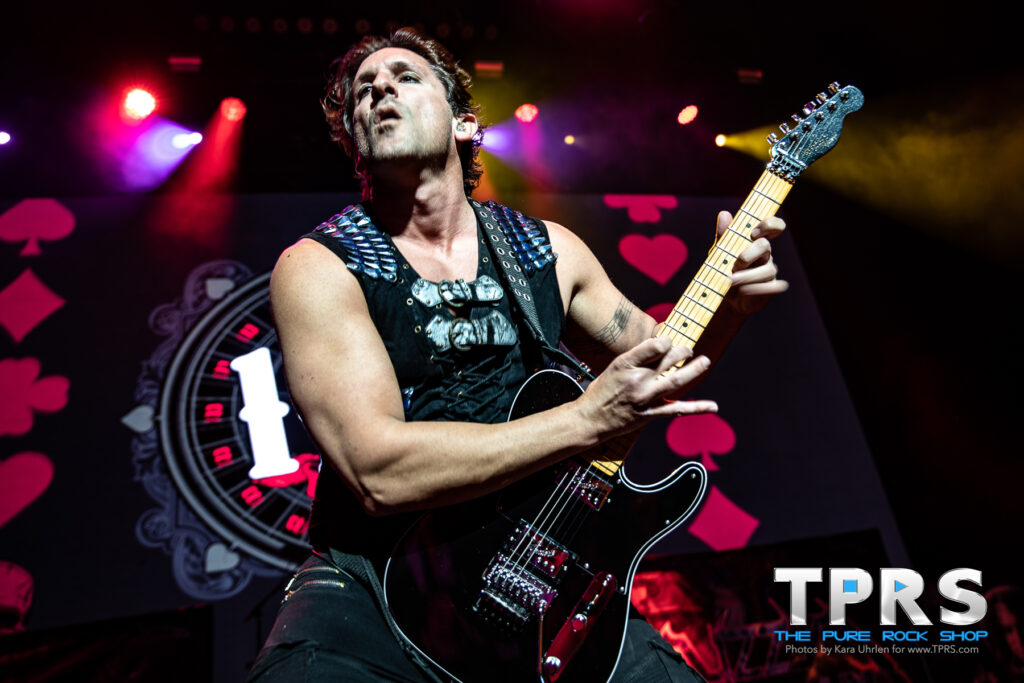 Doro Pesch and her band have been waiting a long time for their return to M3 Rock Festival with pandemic travel restrictions keeping them away, but they finally made it back some two years after their originally scheduled performance for May of 2020.

She was joined by longtime drummer Johnny Dee, guitarists Tommy Bolan (Warlock) and Bill Hudson (Trans-Siberian Orchestra, U.D.O.) and Mitch Steward (Circle2Circle) on bass.  While it is common for her band to rotate with Luca Princiotta and Bas Maas hailing from Europe, we were left wondering where Pennsylvania-bred Nick Douglas was hiding. It appears that bassist Stefan Herkenhoff (Beyond the Black) had joined the fold in 2021 while Nick was taking some time off from travel, and Mitch stepped in for this show. Nick Douglas is set to return later this summer at the Orange Loop Festival in Atlantic City, NJ.

As one would expect, with that beast of a guitarist Tommy Bolan in the house, the set weighed heavy on Warlock classics, kicking off with a triple shot of “Rule the Ruins,” “Burning the Witches,” and East Meets West.”  Definitely a challenge to catch a shot of our friend Johnny from the photo pit, so I was sure to catch up with him at the after-party (how could I not, I was wearing his shirt).  Definitely a story for another day, but I encourage you to check out his former band KICK and the interview that advanced the show that inspired the story behind my fun shirt… 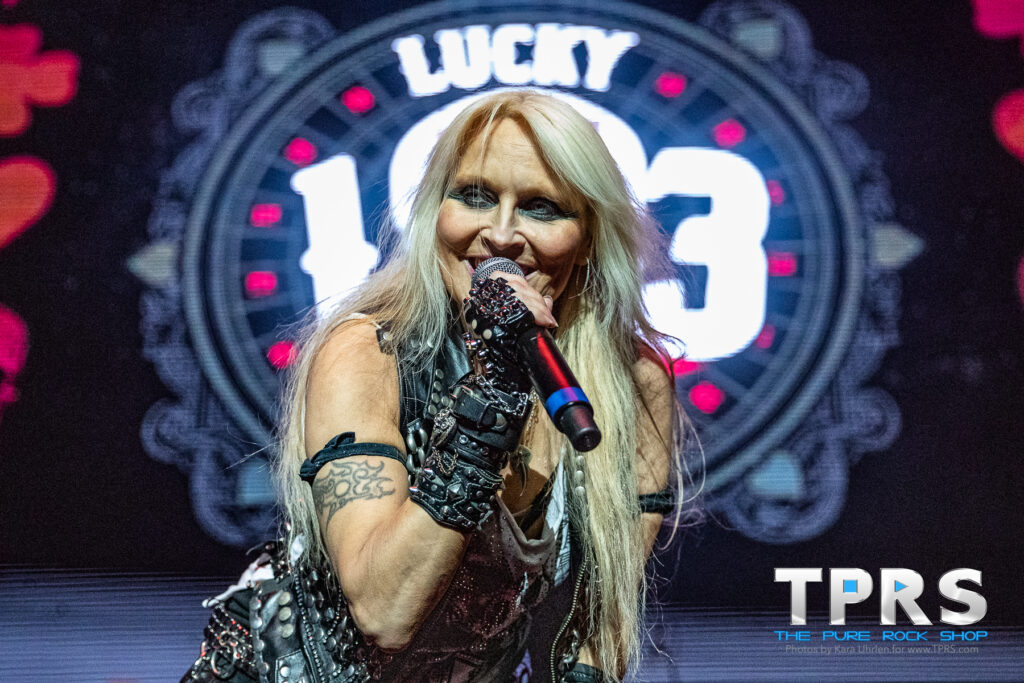 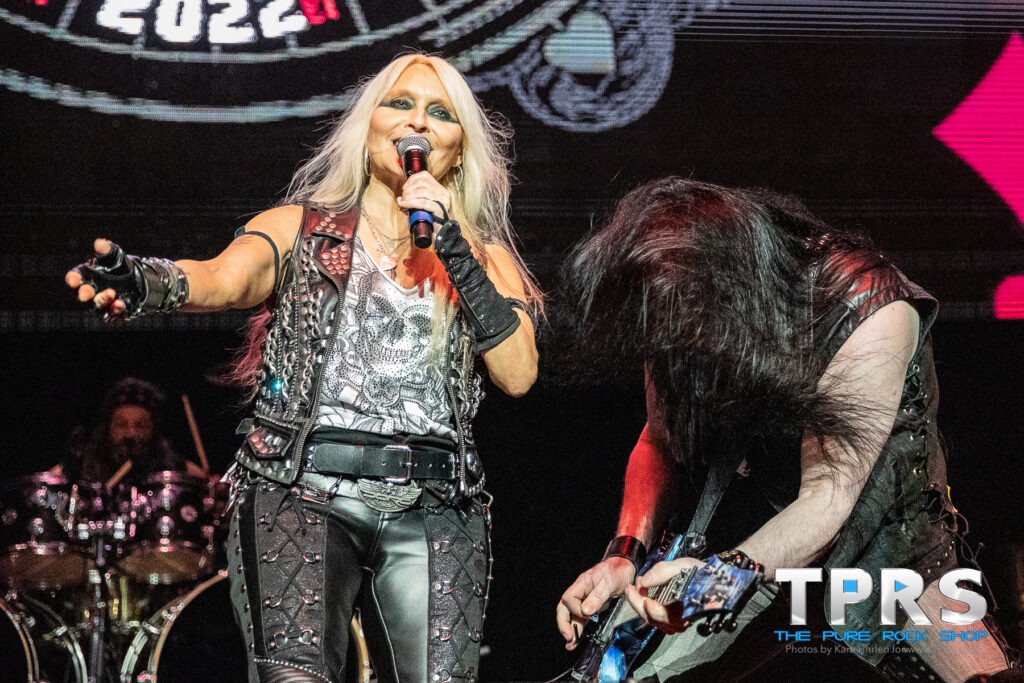 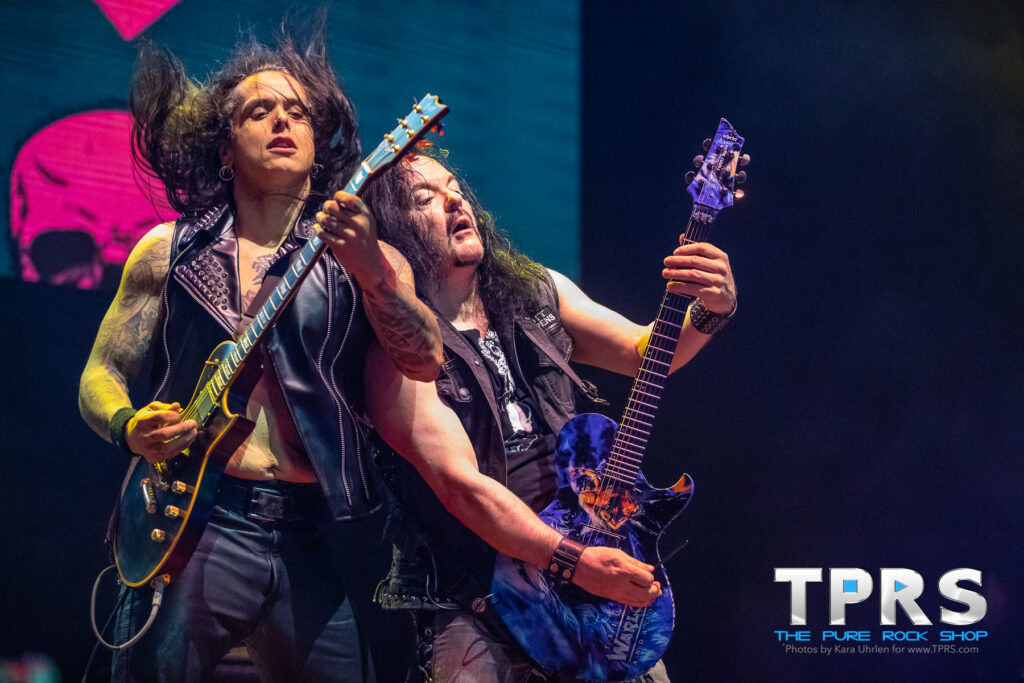 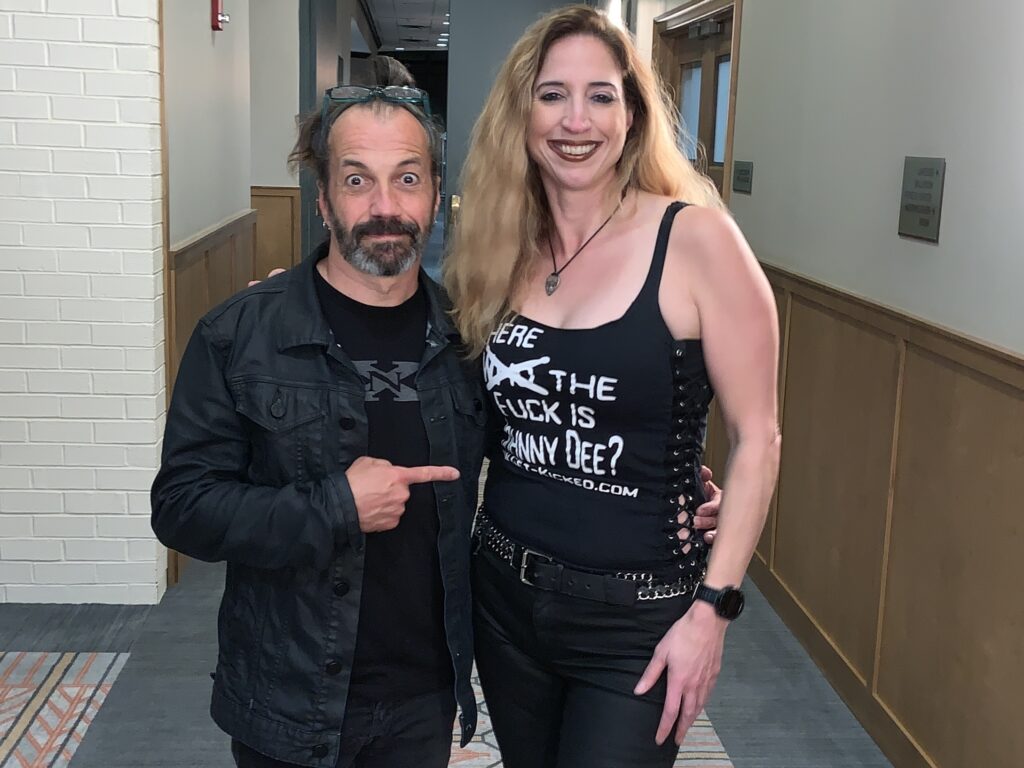 Despite the weather, M3 Rock Festival introduced Baltimore’s hometown boys, KIX, with a flash and a bang, with fireworks on the lawn introducing their performance. KIX is Steve Whiteman, who has made it clear that the only response to “thank you” is a booming “You’re Welcome.”  In fact, “You’re Welcome” is the oh so appropriate name for his solo album, which he debuted last July at M3.  He is joined by Brian “Damage” Forsythe and Bobe Pare on guitar, Jimmy Chalfant on drums, and Mark Schenker on bass.

KIX has one of those sets that never disappoint and this evening’s performance was no exception.  They offer props, choreography, and the humorous audience participation that only Steve Whiteman can direct.  The set was introduced with “Get It While It’s Hot” (as Whiteman sparkled in firecracker red). But, the songs that stole the show were quite the opposite (e.g., the rarely heard “Cold Shower” and the fan favorite “Cold Blood”). By the time time they got to the finale of “Blow My Fuse,” we were left wanting more.

While that was the end of M3 Rock Festival and the end of KIX’s show, there was more to come with the afterparty returning to the former Sheraton (and now Marriott property).  The lobby and ballroom packed in for Karaoke, drinks, and an opportunity to mingle with other fans and the bands leaving us quite exhausted when it was time to hit the road for day two… 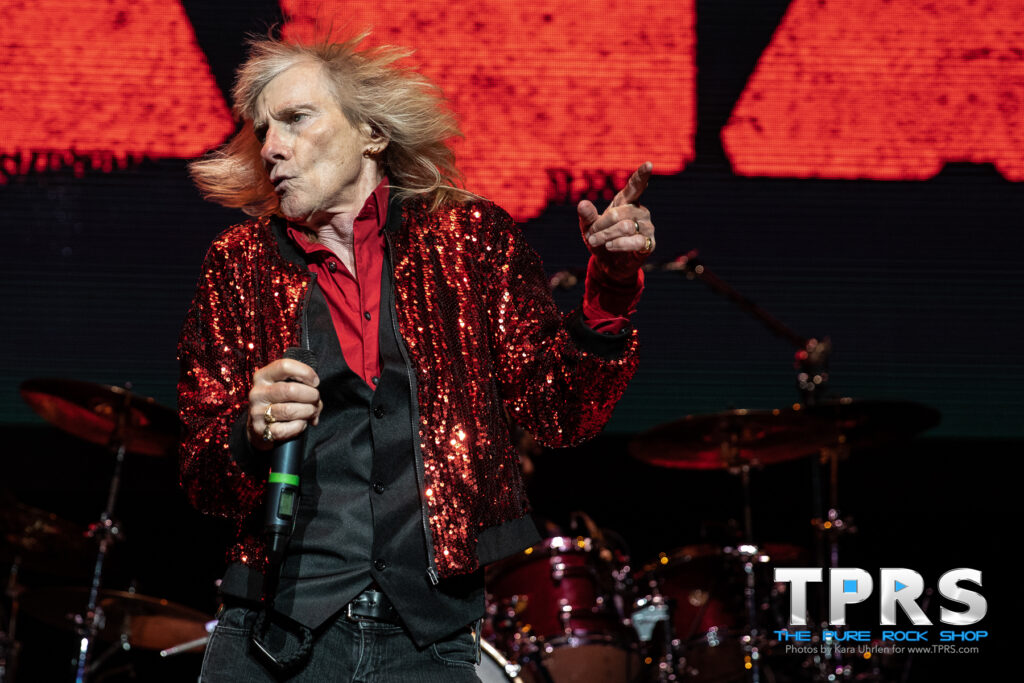 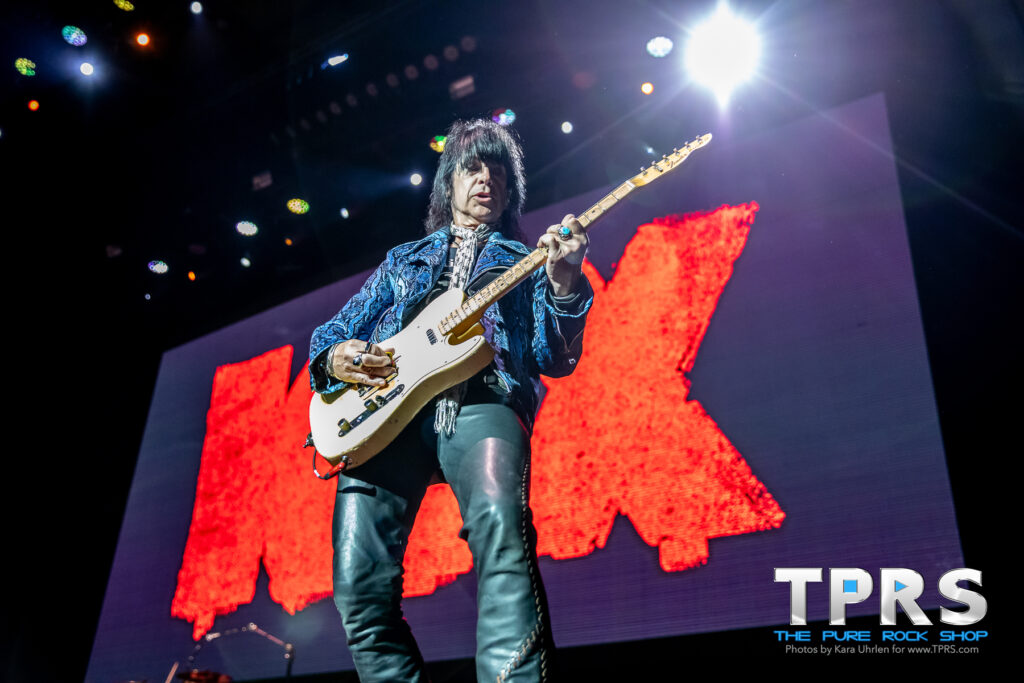 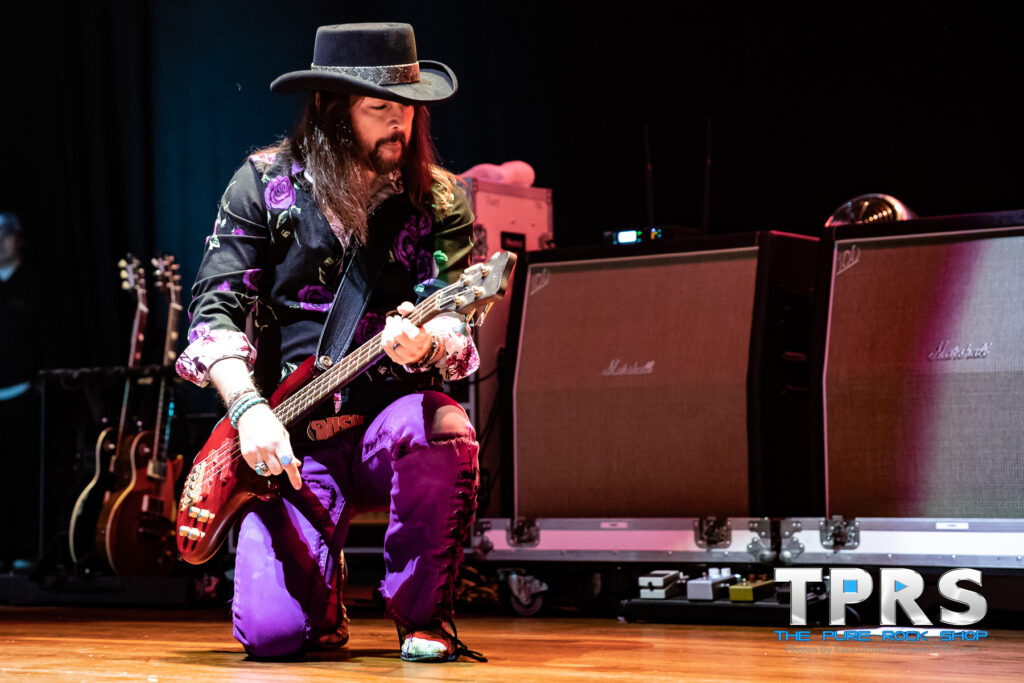 Read on for day two and day three coverage!

Follow us @ThePureRockShop on Facebook and Instagram for more local show coverage including Steel Panther and Jeff Scott Soto and Jason Bieler in Cleveland, as well as festival coverage including the recent Monsters of Rock Cruise and upcoming Masquerade in Philadelphia this July.