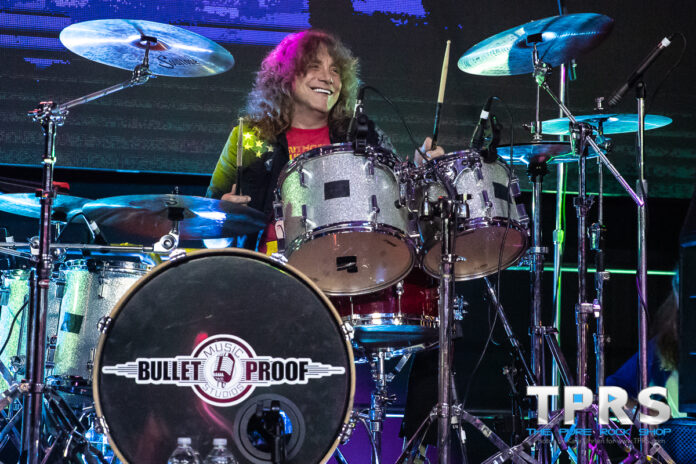 Masquerade kicked off early on Friday with another fun appearance from Atlanta’s Shotgun Superstars, who were joined by the always-social Heber Pampillon from Kickin Valentina.


It seemed that the festival was already falling behind schedule, but nobody seemed to mind as many were tasked with finding alternate transportation plans after the shuttle service was discontinued with the promise of refunds to those who had pre-paid (likely because the driver was unreliable and left many waiting the prior evening). Having concerns about parking availability, I opted to taxi over my favorite kilted security guard Mike and his lovely with Athena.  Luckily, we had no issue pulling right up to the front of the venue either day.

The festival introduced me to several new artists again on day two, starting with Silvertung, a Modern Rock/Metal band out of Maryland and Pennsylvania.  The band has graced the Billboard Mainstream Rock Radio Chart four times with their singles – “Never Too Late,” “Face The Music,” “You & Me,” and “Done My Best,” and has received two Maryland Music Awards – “Best Heavy Metal Band” and “Breakout Artist.”

Comprised of vocalist Speed Vincent, lead guitarist Marc Marchetti, bassist Jimy Grime and drummer Andy Romeo, Silvertung has opened for the likes of Buckcherry, Anthrax and many more.  In fact, you can catch them on the road this month.

They were followed by September Mourning, which is described as a dark pop culture fantasy for your ears and eyes.  The hard rock band, which incorporates a transmedia dark culture project created by frontwoman Emily Lazar in New York in 2009. The band can be found on tour sharing dates with the equally theatrical Beasto Blanco who performed later in the day. 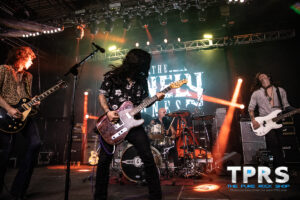 The Lonely Ones were up next, they are a four piece vocal-oriented hard rock band with an ear for melody and a taste for success. The band is Marty McCoy – guitar / vocals, Tommy Johnson – drums, Jymmy Tolland – guitar / vocals  and Tru Payne Roberts – bass / vocals.  Upcoming tour dates include Wisconsin, Michigan and Virginia.

As the day went on, the crowd began to fill in with performances from Kickin Valentina, Tokyo Motor Fist, Spread Eagle and Pretty Boy Floyd that afternoon. Frontmen DK Revelle from Kickin Valentina and Ted Poley from Tokyo Motor Fist brought the party to those fans with crowd visits as they worked the catwalk and the large room which was partitioned into three sections: Balls Out VIP, VIP, and General Admission. In theory these sections were designed to allow patrons room to move and more bang for their buck, but lower than anticipated attendance left the room feeling empty with the barriers that eventually made their way down for good on Saturday night.

Ted was joined by some newcomers to the Tokyo Motor Fist fold, drummer Billy Orrico from Angel could be found filling in for Jordan Cannata who is currently touring with Slaughter and Steve Brown’s longtime partner in crime PJ Farley (Trixter, Eric Martin Band) took the place of Greg Smith who is out on the road with another Ted this month, Ted Nugent.  It was a different set with PJ, as he even took the mic for a little “Tattoos & Misery” from the 2012 Trixter album New Audio Machine, and of course Steve sang us some Trixter as well, because “One in a Million,” is an absolute must! And let’s not forget keyboardist Chris McCoy who we first caught with Tokyo Motor Fist at M3 Rock Festival in 2021.Chris can now also be found with Ted Poley Band and Eric Martin Band. 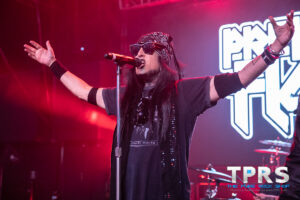 Pretty Boy Floyd delivered an energetic set, which was at times overshadowed by frontman Steve Summers’ jealous attacks on the successes of his peers. An approach at nostalgia that is definitely getting old to the point that it later sparked chatter from fans.

I believe he actually said “All the 80’s band suck” or something to that effect, a sentiment in opposition to an event that was determined to lift up underrated acts from the era melodic rock fans love with a passion, bringing bands like his onto the radar of those who frequent the same shows year after year.

Pretty Boy Floyd is headed to Europe next and is slated to continue their Glam Slam Metal Jam Tour appearances in the states this fall with a new band that should definitely be on your radar, The Midnight Devils.

Also notable was Spread Eagle’s addition of touring guitarist Gianmaria Puledda (Jommy) who could be found filling in for Ziv Shalev this past week, attendees got to catch Jommy’s first show with the band, and for many this was the first time catching Spread Eagle.

Personally, I’ve only seen the band once before at Hair Metal Heaven in the United Kingdom back in 2017, but of course have caught bassist Rob De Luca several times on the road with Sebastian Bach and U.F.O. So fun to hear old favorites from 1990 like “Suzy Suicide” and “Switchblade Serenade” live.

For those who missed it, Dirty Looks will be on the Monsters of Rock Cruise in April 2023. And I for one, am definitely looking forward to catching up with Jason and Paul again later this month with Dangerous Toys at Monsters on the Mountain.  The band has also recorded a live performance called Cool from the Speedway last September which is now available.

As evening set in, the band I’ve been waiting decades to see finally took to the stage: Dirty Looks.

Their performance was overcast by a bright white screen depicting a logo of another band called “The Dirty Looks” that made photography a challenge and left the band clearly frustrated until it was swapped out for the Masquerade branded logo and our vision was restored.

Dirty Looks brought out fan favorites dating back to their 1988 release Cool from the Wire and 1989 release Turn of the Screw with that AC/DC inspired sound that earned them a deal with Atlantic Records and a spot on my shelf.  Now with Jason McMaster (Dangerous Toys, Broken Teeth) filling the void left by the passing of founder and frontman Henrik Ostergaard, Dirty Looks consists of Jason’s Dangerous Toys bandmate Paul Lidel, along with Cool From the Wire bassist Jack Myers and drummer Gene Barnett.

Guitarist Paul Lidel tellsThe Pure Rock Shop that he “Had a blast at the Masquerade festival! The 2300 Arena was a great venue.  Got to see lots of old friends and made some new ones.  Also got to watch some great bands.” He added, “Our show was really fun and the audience was fantastic!”

Our friends from Beasto Blanco took the stage next as the schedule continued to run late.   Rumor had it that there was a search party looking for a fan to cool off the lovely Calico Cooper so that she could keep her “Machine Girl” look in place as they suffered through the Philadelphia heat.

As I reflect on their performance, I can tell you that it doesn’t matter if this band is taking the stage in a crowded arena or a small club, their delivery remains the same and continues to evolve as the band grows.  But it is pretty cool to see these guys performing in front of arena-sized crowds in Europe as they build a following of loyal beasts around the globe.

Fronting the band along with Calico, you will find the beast of the band Chuck Garric adorned with animal pelts and full of smiles as he encourages crowd participation with guitar signage screaming HELL YEAH and double horns up as the lovely Calico entrances the crowd with her animal eyes and laser spotlights.  Rounding out the band you’ll find “Brother” Chris Latham on guitar, Jan Le Grow on bass and drummer Sean Sellers. 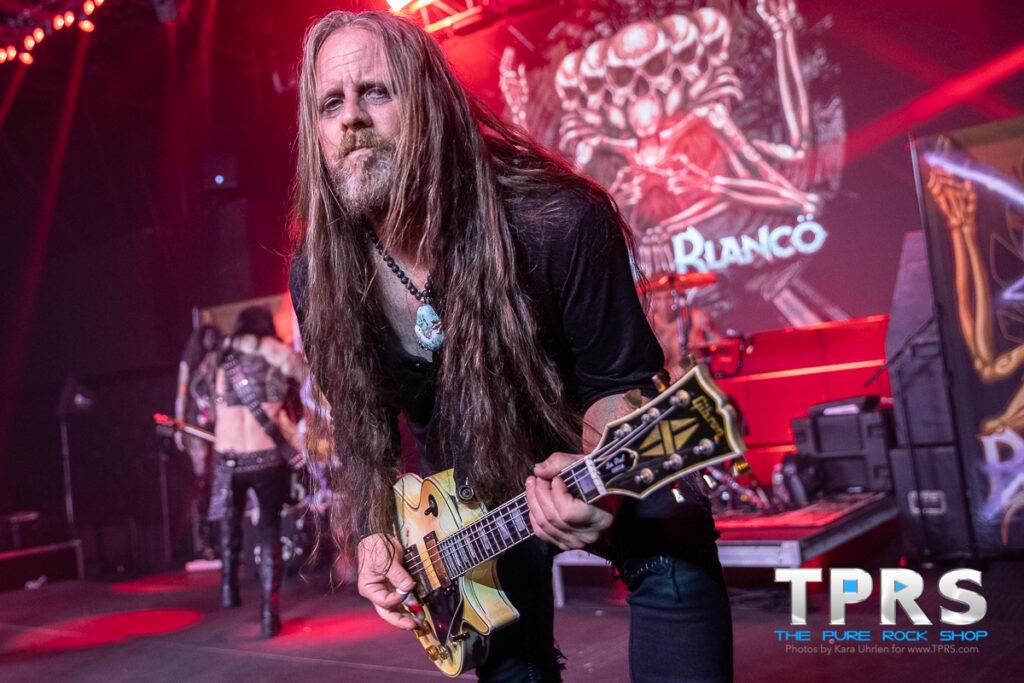 Headliner Steven Adler, the original drummer of Guns ‘n Roses was joined by guitarists Alistair James and Michael Thomas, and frontman Ari Kamin.  The band now includes new bassist Cristian Sturba from Argentina, who replaces Tanya O’Callaghan who was recruited by David Coverdale to join Whitesnake (until of course respiratory illness caught up to the tour leaving the band no choice but to cancel both the remainder of their European dates and their scheduled tour with the Scorpions here in the United States).

The band tore through all of our favorite classic Appetite for Destruction cuts including “Mr. Brownstone” which featured guest guitarist Joey DiOrio, a general manager from Stogie Joe’s Tavern, a south Philly tavern.

According to Alistair, Stogie Joe’s hosts rock ‘n roll block parties, charity drives, and supports live music in general throughout the trip-state area.  Other highlights included an extended jam session during “Good to be Bad” from the Adler band’s 2012 release Back from the Dead.

It was a shame to see the band hit the stage so late, as most members of the audience retired for the evening long before midnight, but the band rocked out just the same.   Definitely an adjustment for me, because pretty much everything on my side of the state now closes by 11pm these days instead of the historic 2am.

If you haven’t already, check out our Masquerade artist spotlight coverage, as I’ve included links to the artists featured in the showcase so that you can check out new music and help our rock ‘n roll family grow.

I also encourage you to follow us @ThePureRockShop on Facebook and Instagram for local show coverage and festivals like the Monsters of Rock Cruise and M3 Rock Festival, additional coverage from Masquerade, and the upcoming Monsters on the Mountain festival. Stay tuned to more coverage from day three, as well as interviews with Nitro Nitra and Resist & Bite.