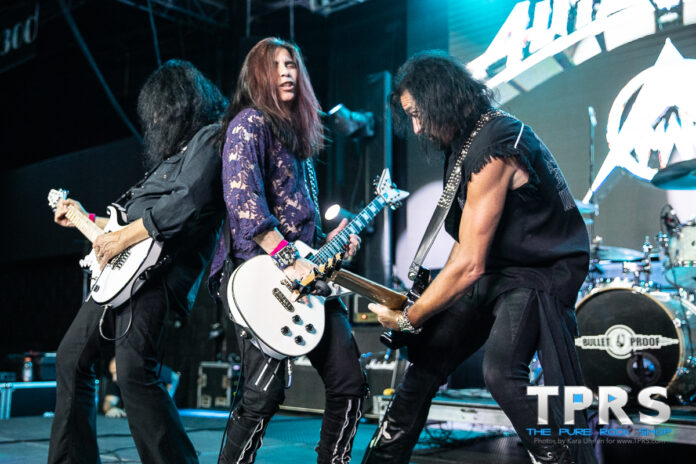 So glad that I arrived early on the final day of the festival, although I will say that it was a challenge to get out the door before noon.  And I mean that quite literally as the hotel gate at the Marriott seemed to want to hold me hostage…but I made it to the venue just in time to catch Babylon Shakes who surprisingly took the first slot of the day with Wild America dropping from the bill.

I’ve been a fan of this band since High Volume Music introduced me to frontman Chris Clark what seems like an eternity ago. You can check out that interview from my radio days at WNJR in our archives. Hailing from Virginia, and initially delivering more of a sleaze rock vibe, Babylon Shakes now describes themselves as vintage soul rock ‘n roll with a blend of soul, rock, blues and country that can be heard in their newer material from Blue Mountain Records.  Clark is joined by Jeff Mortimer on drums, Gary Jordan on guitar, and Chris Herninko on bass.

That old soul vibe continued with Native Sons, a Louisville-based rock band that tears up the stage with youthful energy overshadowing a classic sound.  The band features Ashton Blake on Vocals, Victor Adriel and JT Shea on Guitar, Jim Quggins on Bass, and Grady Steel on Drums. Native Sons has definitely been making a splash and earning fans wherever they go. Would love to bottle up some of frontman Ashton’s energy as he was challenging to keep up with from behind the lens. 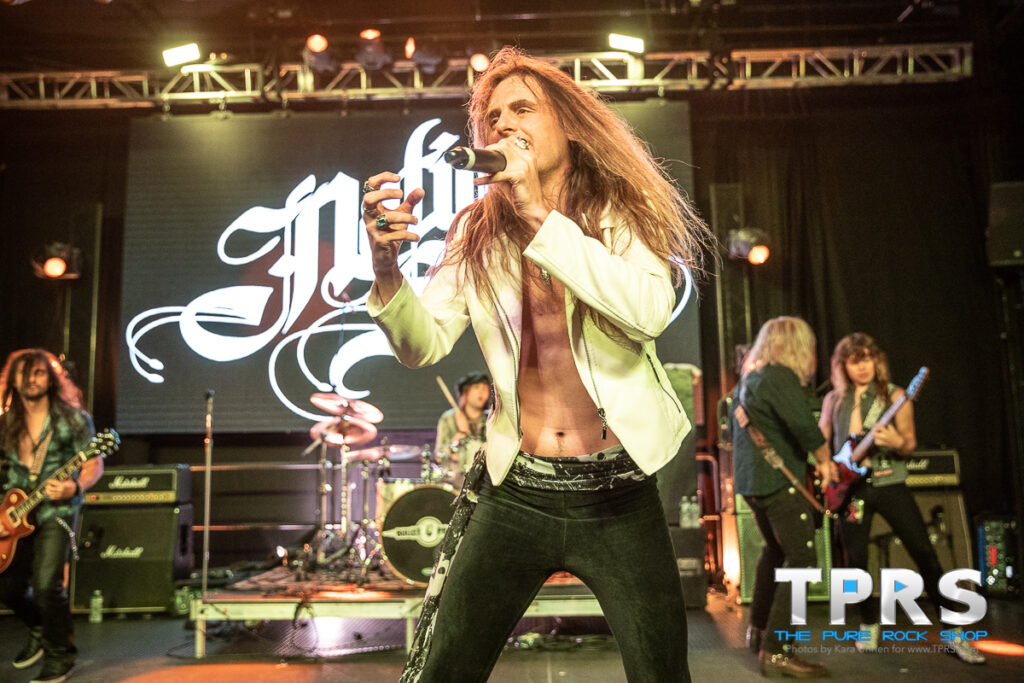 For those missed the artist showcase on Thursday, John’s Crossing and Shotgun Superstars offered encore performances, giving me some time away from the camera before two highly anticipated acts took the stage mid-day.  The first of which was Steel City featuring Mike Floros and Jason Cornwell who we’d caught with their other band Love in Chains on Thursday, were joined by keyboardist Anthony Stahl, as well as Cold Sweat frontman Roy Cathey and drummer Anthony White (who just recently joined the band).

And, the band that could easily be missed, if they weren’t already on your radar, Resist & Bite. Fronted by Natan Utz (Blonz, Lynch Mob), Resist & Bite is an excellent byproduct of Covid downtime, with guitarist Tommy Skeoch (Tesla), David Parks on drums, Steve Stokes on guitar, and Brian Powell on bass.

When I caught up with Nathan to recap the festival and get the scoop on the band, he noted that they really don’t want to make this band about their past successes, but it is rather hard to deny the presence of Tommy or to deny fans some Tesla classics. Much respect to this band from their peers as Ashton Blake and Roy Cathey could both be found sharing the microphone with Nathan from the front row, and props to drummer David Parks for making the phone calls that made this band and it’s new music happen!  Be sure to check out our interview with Nathan for the full scoop.

One of the hardest choices I had to make leading up to this event was to leave Pittsburgh for Masquerade the same day my friends from Every Mother’s Nightmare, Roxy Blue, and KiLLeR DWaRfS were performing here at Mr. Smalls Theater In fact, Brad Lee immediately heard from me when I saw the booking, because my heart sank.  But I knew I’d see them all in Philadelphia, and as if the trio wasn’t enough, we also had performances from Tora Tora, Autograph, and an afterparty with the all girl Guns ‘n Roses Tribute: Paradise Kitty to look forward to on Saturday night.

The Memphis boys Every Mother’s Nightmare (EMN) took the stage with frontman Rick Ruhl with his typical energy, but what what was missing was his typical baseball cap.  I couldn’t be more thankful, as he is always hiding in the shadows, but is such an expressive singer.  They kicked off the set with a personal favorite “Crazy Loco” and took us back with classics like “Love will make you Blind.” Ruhl is joined by Travis “Gunner” Butler and John Guttery on guitars, Troy Fleming on bass, and Allan Bone on drums.

They were followed by the second of three southern rock bands, Roxy Blue, who were fronted by the equally energetic Todd Poole, who later could be found cheering on his bandmate Jeffery Wade Caughron as he filled in on bass with Tora Tora for the first time (in place of Patrick Francis). Roxy Blue was rounded out by Josh Weil on bass and Jimmy Fulp on drums.  Jeff tells us that the band’s new album has recently recorded and they are currently in the mixing phase.

Tora Tora brought the biggest crowd of the night with their Memphis friends gathering side stage, and fans pounding fists throughout the set. EMN bassist Troy Fleming noted that this was quite possibly the first time all three bands had every performed together on the same bill, and consequently the momentum built throughout the evening.

From the south to the north, we were soon invaded by the Canadian band, KiLLeR DWaRfS with founders Russ “Dwarf” Graham on lead vocals and Darrell Millar on drums, along with Gerry “Dwarf” Finn on guitars and Johnny “Dwarf” Fenton on bass.

Hadn’t really followed these guys in the MTV days, but I’ve become a fan having caught them on the Monsters of Rock Cruise a few times, where I was educated about that little red tricycle and favorites like “Doesn’t Matter” and “Keep the Spirit Alive.”

Just prior to Autograph’s set, Brad Lee made some announcements to the audience with Randy Rand’s widow Regina centerstage and the members of Autograph setting up behind him.  As I list off the talent lined-up on this Saturday in sunny Philadelphia, you couldn’t help but shake your head at the number in attendance.  Disappointing to say the least, but those in attendance were there to offer up support to the next band in full force.  VIP Barriers came down, and the crowd moved forward as Autograph members Simon Daniels, Jimi Bell and Marc Wieland welcomed bassist Steve Unger (Metal Church) in tribute to the music of the late Randy Rand.

Honestly, I wasn’t sure what to expect.  Brad and I both started crying just thinking about this moment, but when the guys hit the stage, the added energy from Steve’s metal influence, and the infectious smiles of Jimi and Simon, simply melted our hearts and the band’s set unfolded.  I can’t wait to put on the new Autograph earrings my daughter made for me from Jimi’s new guitar pics, and wear them proudly at Monsters on the Mountain festival in Tennessee later this month!

I’ve gotta tell you, by the time Paradise Kitty hit the stage for the afterparty, the crowd was shrinking and those left were exhausted, but that didn’t stop these girls from bringing the energy that they are known for, as the all female band delivered all of our favorite Guns ‘n Roses classics.  The current line-up is fronted by Jenna Syde along with her longtime bandmate Rachael Rine on drums, lead guitarist (and acrobat) Ariel Bellvalaire, Terri King on bass and Hisako Ozawa on rhythm guitar.

Follow us @ThePureRockShop on Facebook and Instagram for local show coverage and festivals like the Monsters of Rock Cruise and M3 Rock Festival, additional coverage from Masquerade (as I have thousands more photos to sort through), and the upcoming Monsters on the Mountain festival.