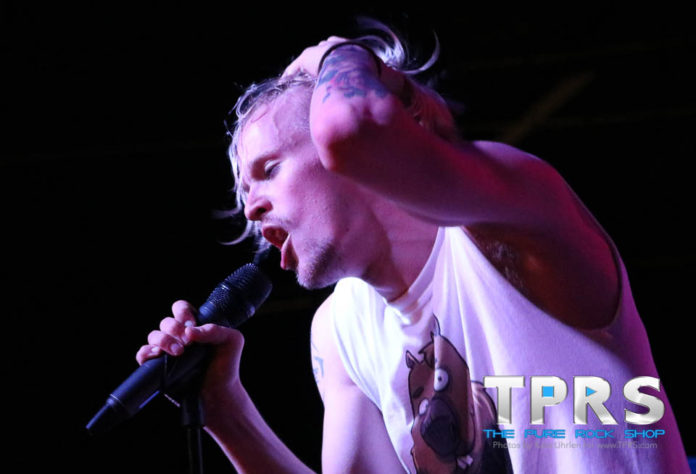 While we hadn’t traveled nearly as far as many of those in attendance at Melodic Rock Fest 5 (just one time zone and a one hour flight from Pittsburgh), we found ourselves quite warn out from covering the entire show on Friday and staying up in to the early morning hours on Saturday at our ‘home away from home’, the Crowne Plaza in Northbrook. As a result, we had to make some tough choices, secure our planned interviews with Treat, Crazy Lixx, and H.E.A.T. or get to the show on time?

We woke to a sunny day and a pool that had quickly been filled with water overnight. So, the deal was sealed.  We enjoyed a nice brunch at the hotel buffet and set up our “office” under an umbrella beside the pool to enjoy the nice weather.

While we missed the early bands on the marquee, notably The SJ Sindicate, the Dave Friday Band, Far Cry, Madman’s Lullaby, and most of Adriangale‘s performances, we were quite successful in bringing fans unique on-site coverage under the sun, our very own Swedish summer.

As mentioned in our first installment of event coverage, we caught up with Treat poolside after their headlining performance on Friday evening first.

Later, we met up with Crazy Lixx vocalist Danny Rexton to chat with him and bandmates Jens Sjoholm (Bass) and Jens Lundgren (Guitar) about the band’s preparation for their 6th studio album, the story behind “XIII” and how their songs came to be featured in the Friday the 13th video series.

We had just about lost hope in catching up with Erik Grönwall despite their tour manager’s diligence in keeping us up to date on H.E.A.T.‘s schedule.  But, just when we were about to head to the H.O.M.E. Bar, we spotted Erik at the hotel bar picking up the band’s first round of drinks. Drink in hand, we were able to connect with him and keyboard player Jona Tee for a fun poolside chat.

Having planned to only speak with Erik, my questions were written as such, discussing his recent performance on NBC’s Jesus Christ Superstar, Swedish Idol, and joining H.E.A.T., but Jona was a real sport and up for discussing anything, including Aliens?

After a quick dinner at the H.O.M.E. Bar (what did you all put our your yummy flatbread?), we grabbed a spot to check out Gary Moon, and were delighted to a set of classic melodic rock from the one-time Night Ranger frontman and his band which also featured Matt Beal on Lead guitar, Eric Ragno on keyboards, Andy Hewett on bass, and Jim Bove on drums.

Early on in the set, Gary Moon invited a fan Ken Potocki to join him on stage, and sing along to “State of the Heart,” an obscure track from Gary’s solo album Still Moon.

“I’ve always loved the song, despite how unknown it is,” Ken later explained.

In my opinion, this was one of the coolest fan moments of the weekend.  Below is a shot of Ken and Gary taken from the audience and some background on how this collaboration transpired.

“I reached out to Eric Ragno back in February, saying how much I loved the song and would love to hear it at the festival (he had never heard it before),” say Ken Potocki

“…I couldn’t believe a 20-year-old from Chicago was so familiar with Gary’s work! The song wasn’t on my radar, so he sent me a YouTube link, which I then forwarded on to the band, asking them to please learn it. It was nearly cut several times, but I showed the band that others were passionately chiming in about how much they loved that song! So it became an integral part of the set. And, if we had to do it, then Ken would have to come up and do it with us!,”
confirmed Eric Ragno 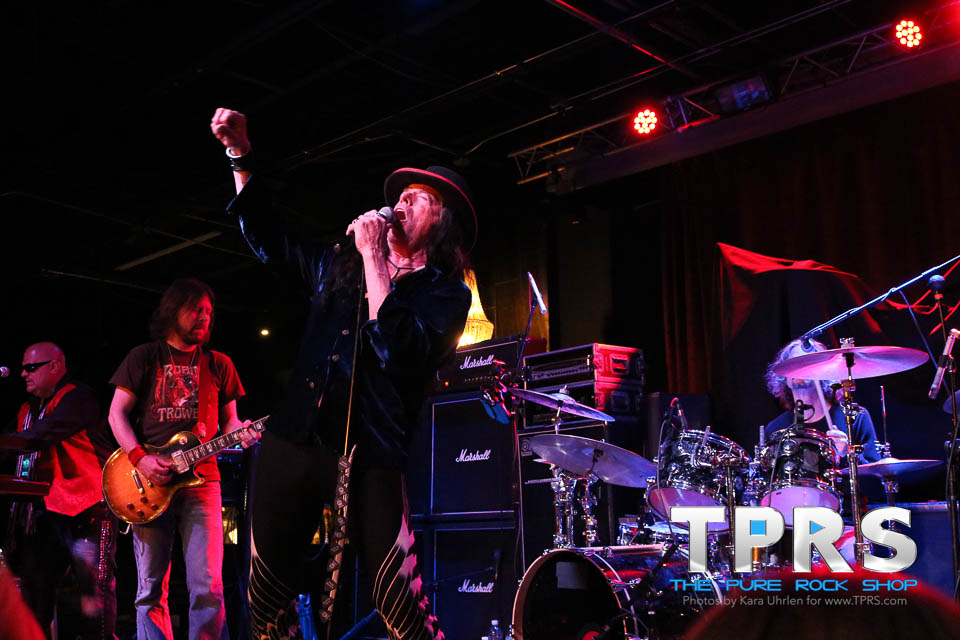 For those who are not familiar, keyboardist Eric Ragno is a four-time “keyboard player of the year” winner at MelodicRock.com has performed with the likes of Joe Lynn Turner, Jimi Jamison, Ted Poley, Graham Bonnet, and more, had the following to add about the show his current focus, Gary Moon:

“Gary has had such an amazing career – touring with Three Dog Night, recording an album with Night Ranger (Feeding off the Mojo) and opening for Foreigner among many others. We played an acoustic set at Melodic Rock Fest 4, and this year we took things up a notch. The MRF fans are amazing! So we created a fan-favorite set for this show which featured songs that Gary sang on tour with both bands, along with the first half of his Still Moon album. We’re working with management on a tour right now, in the U.S. and beyond!”

Following Gary’s set, I noticed how cool it was that on-site vendors would pull out any albums that the musician’s had performed on for quick purchases after the set so that fans could score autographs.  For example, I spotted a double disc set that included Night Ranger’s Feeding off the Mojo on display for anyone looking for Gary’s signature. Then, later had the chance to chat with longtime friend of The Pure Rock Shop, David Tedder who had also secured vendor space for the festival:

“MelodicRock Fest 5 was a victory from every standpoint as far as I’m concerned. As a vendor at the event, I have to say that results exceeded my expectations and we had people come back several times to buy even MORE product. Speaking with some of the other vendors there it seems we all had the same experience. What’s better, if I didn’t have a certain CD or DVD that someone wanted and I knew someone else did I would send them to them and I know others were sent to me from the other vendors. It was basically a community effort all around. Hopefully the fest will continue in the future.”

Second from the top were Crazy Lixx who flew in from Sweden via Canada for their only US performance this year, and apparently they barely made it into the Country!  But, Danny Rexon, Joél Cirea, Jens Sjöholm Jens Lundgren and Chrisse Olson were all in check. So, that meant it was time to “Lock up Your Daughter” and move like the “Girls of the 80’s.”

It was interesting to get some insight into how these guys write for their albums when we spoke to them early in the day.  It must be a magic formula, because the riffs are incredible, the lyrics are so damn catchy, and of course, nobody will deny they are so fun to watch.  Favorites included “Wild Child”, “XIII”, “Hell Raising Women”, “Killer” and finishing with a rousing version of “21 ’till I Die.” But, perhaps most impressive was the stellar crowd participation on “Whiskey Tango Foxtrot“…WTF…MRF5 fans are awesome!

In fact, there was so much love for Crazy Lixx that there merchandise was completely wiped out by the time we arrived onsite.  Luckily, they’ve made their special edition “red, white, and blue” festival shirts available online for purchase through their website, where you can also learn how to get special band access and merch discounts by contributing to their Patreon account.  One fan in particular, truly stood out after meeting her following our interview with the band, and here is her story:

“So, I came for Crazy Lixx, though I enjoyed the bands I did see, but they were the main reason for the trip. I came from Colorado, first time on a plane in almost 30 years, first real vacation ever. First time traveling to see a band. It was almost Ill fated, but it was everything I wanted and more. Truly genuine and good guys. The show itself was amazing, mind blown at how good they are. Can’t really think of any of descriptions, other than wow!” ?

With headliners H.E.A.T. having performed at MelodicRock Festival once before, we heard we were in for another “wow” kinda moment as words really can’t convey how amazing H.E.A.T.‘s performance was.  It was the most anticipated show of the weekend, and our first time seeing the band.

What I can tell you is that I’ve seen some amazing showmen in my twenty-plus years covering rock shows.  I’ve met “Diamond” David Lee Roth and the charismatic Billy Idol and I’ve seen them both perform from the photo pit.  I’ve also photographed Bon Jovi, KISS, Aerosmith, and The Cult.  But, I’ve never seen an artist take it to 11 (make that 12) during the first song and maintain that momentum the entire set.  In fact, it took a few thousand photos to capture more than a blur of Erik Grönwall‘s mohawk across the frame.

But, as H.E.A.T.‘s second singer, we all know that the embers were hot long before Erik joined the band, he merely added fuel to the fire.  And the entire band ,consisting of Dave Dalone on guitar, Jona Tee on keyboards, Jimmy Jay on bass, and Crash on drums, were beyond reproach kicking things off hard and heavy with their truly unique blend of melodic rock and electronic pop.

With the pounding thunder of Crash on the drums and catchy ‘oh..oh’ lyric which was just perfect for engaging the crowd, H.E.A.T. opened with “Bastard of Society” from the band’s latest release Into the Great Unknown.

And, kept the audience more than engaged delivering favorites like “Inferno” and “1000 Miles,” as well an acoustic rendition of “Tearing Down the Walls,” which Erik noted they almost left out of the set (seriously?) prior to leaving us speechless as they closed out the night with “Point of No Return” and “A Shot at Redemption.”

The most entertaining moment of the night was what we are lovingly referring to as “crowd surfing and covers” which we gladly captured on video.  I’m exhausted just thinking about their set, yet still wondering why I choose sleep over catching the “In and Out of Trouble” acoustic performance by Erik and Jona by the pool early Sunday morning.  If there was a repeat button, I’d hit it right now, because video simply doesn’t do this band justice.

Check out our interviews with Crazy Lixx and H.E.A.T. if you haven’t already, and follow us @ThePureRockShop for more coverage from Sunday, May 6th.