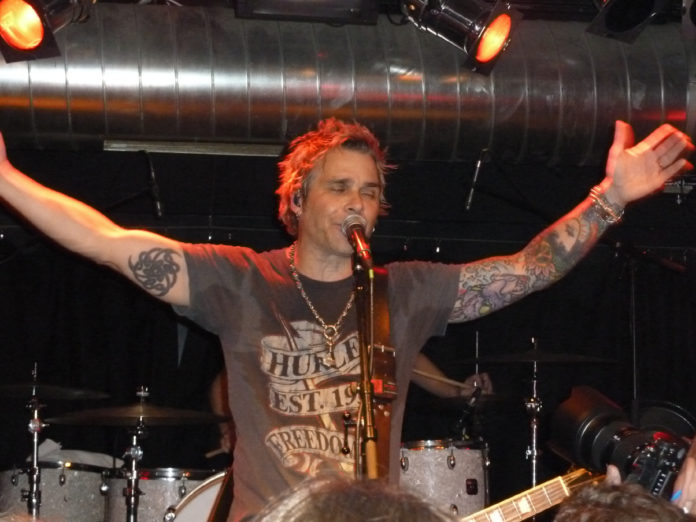 Having no intention of touring and being between albums and record labels, Tramp was brought to the road by a request to play a concert in South America. He chose to book a short tour instead of putting a band together for a single show, and has already played several cities throughout the south, northwest, and the east coast of the United States.

He keeps the songs and the show simple, mixing in tamed White Lion songs with his own material from Capricorn, and receiving a positive response from the crowd throughout his performance. He himself, compares his stage show to the likes of Bruce Springsteen and Bryan Adams, and most would agree that Tramp’s melody and distinct vocals sound just as perfect as they did ten years ago, leaving no need for bells and whistles.

During his performance at the Flying Machine in Lorain Ohio, the depth of emotion behind his songs was very impressive, with highlights being “Have You Ever” and “Your Already Gone.” With his Capricorn album, Tramp really wore his heart on his sleeve, and it is great to hear him share that emotion with a crowd of people that for the most part, have been listing to his music for years.

He takes fans back to his early years with songs like White Lion’s “Broken Heart,” which was the first song written by Tramp and White Lion guitarist Vito Bratta, and released on both the band’s debut, Fight to Survive, and Big Game albums.

Tramp plays everything from “Wait” to “Wait Not For Me,” with his version of “When the Children Cry” at the top of the list. And keeping with the straight-ahead rock sound that Tramp is today, he finished the evening off with an encore of Neil Young’s “Rockin in the Free World,” including verses of long-lived rock anthems like Queen’s “We Will Rock You” and Thin Lizzy’s “The Boys are Back in Town.”

TPRS.com also caught up with Tramp and band again at a last minute gig at Ron’s Crossroads in Akron, Ohio on May 16, for one of their final performances for this tour.
The setting at Ron’s allows the fans to get closer to the band and it really made for a great evening. For a small crowd, the audience certainly made a hell of a lot of noise, and the band certainly responded to that. This performance had much more energy behind it, and also included a great addition to the set from Tramp’s Capricorn album, “Had I Not Complained,” which featured keyboardist Jimmy James on harmonica.