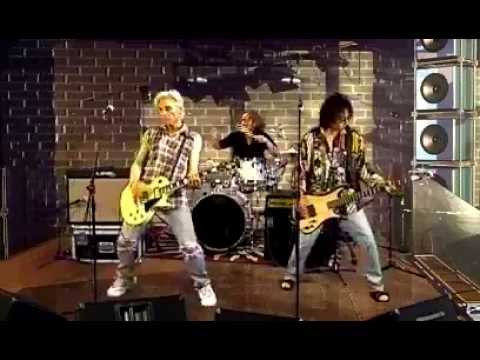 In support of their Columbia Portrait debut, Samantha 7 has hit the road to tour the US over two and a half months, after which they plan to tour Europe. TPRS.com caught up with the band in Buffalo, New York at Migg’s Classic Roxx Café, where they played to an enthusiastic crowd that was surprisingly comprised mostly of men.

For those who haven’t heard, Samantha 7 features lead vocalist, songwriter, and as always, guitar great C.C. DeVille. When asked which he prefers, Poison or Samantha 7, C.C. says he likes Poison, but he loves to sing…

But the thing is that I’m trying to let everyone know that this Samantha 7 is really different, because I don’t want somebody to think like they are betraying Poison if they like Samantha 7 – this is completely two different things. And I’m not trying to steal Poison fans away. If you like Poison, chances are you might be bored with a Samantha 7 show, because it’s much more cerebral and much less visual.”

He strikes up an interesting comparison between the two shows by saying its like going from Garry Glitter to Bob Dylan, though he enjoys aspects of both. And while everyone else is recovering from the Poison summer tour, DeVille finds himself drawn back to the road. After their first week on the road, he says they’re just having a great time, and the songs are coming out great live.

He exclaims, “I’m not tired, I can’t wait to get out there. I just love to be out there. This is where I belong. I belong out here and I didn’t even realize it cause I was a junkie for so long!”

For those wondering if Samantha 7 will be playing their hometowns, DeVille says, “The truth is, you have to ask a promoter to take the show, and if they don’t think that you can sell it out or have anyone come, well then they don’t take the show…But please, I just want this to be known that we’ll play everywhere and anywhere …I think also that I have to prove myself. With Poison, that’s one thing but this is by myself, so they want to make sure that I show up and that the songs are good, and I don’t blame them, cause it could be a major investment for a night.”

During the live show, the energetic frontman invites the audience to enjoy the ride as he performs along with band members Krys Baratto (bass), Francis Ruiz (drums), and special guest, Michael Lardie of Great White (guitar).

In addition to Lardie’s presence on guitar and background vocals bringing a fuller sound to the band’s live show, it offered an interesting contrast between the two guitarist, who have come from two completely different sides of the spectrum — DeVille coming from the flashy, glam-influenced Poison and Lardie coming from the blues-driven Great White – though they compliment each other very well.

According to DeVille, “He’s the musical director, he’s the Paul Schaffer, he’s the main reason why the band sounds so controlled, because when its me, we’re out of control. He like keeps a lid on it.”

In Buffalo, they kicked off the set with “Hollywood and Vine” from Samantha 7’s self-titled debut, and concluded with a karaoke-style version of Poison’s “Talk Dirty to Me.” And, during the latter, in the spirit of Poison, DeVille invited anyone who could fit to hop on stage and sing along.

DeVille says, “When you hear the band, you immediately get this sensation that it is not an act. You immediately feel, ‘wow, this is from his heart’. This band, they’re all plugging in. It’s not like a prefabricated thing. You immediately get that cause it’s wonderfully sloppy, and honest, and wonderful, it’s all those things, and I love it. Nothing is really planned.” However, DeVille finds himself in a much more vulnerable position in this band than he does with Poison.

“I’m much less shielded as my character…when I’m C.C. DeVille, I’m not risking anything. I put C.C. DeVille on, and it’s ‘WOW big show!’. When I’m doing Samantha 7, I expose myself quite a bit. I think anything that’s worth doing is worth doing 100%, in other words, you’re betting more. So, if you win, you win big, if you lose, you lose big.”

In this particular case, DeVille had no problem winning big. He quickly won the audience over, with cuts like “I Wanna Be Famous,” “Slave Laura,” “Bury Me,” and “Framed.” In fact, the band delivered live renditions of their entire debut album, as well as “I Hate Every Bone in Your Body but Mine,” the first Poison song to feature DeVille in the spotlight.

In addition to the catchy tunes, the night was enhanced by the always-humorous commentary of Mr. DeVille, who personifies the cliché of a loud New Yorker (only with Hollywood style).

As for his commentary, DeVille explains, “It goes by so fast, its like wow. And, you know what it is, I think I’m doing it more like Storytellers (VH-1). I didn’t mean it to be but I got so much to say. So, I’m watching Storytellers the other day and I’m like, you know, ‘that’s like what our show’s like’, because I can not go from one song into another song without explaining maybe not the song but why I felt or feel about certain things.

There’s a lot of things that were left up in the air with my life that I really enjoy talking about, and because I was lucky enough to survive, it’s a very enlightening story, and God knows how much negative there is. And as always, I always try to inject a little humor in it, because to from drugs and then go to food is very f#cking funny.”

Though DeVille believes that most are unsure of what to expect from his project, he is still drawing a small number of dedicated fans, who he encourages to be his soldiers, and help spread the word about Samantha 7.

“I’m asking you to join the fight. Let me recruit you – the Samantha 7 friends of the friendless,” says DeVille.

DeVille is spreading the word about Samantha 7 himself through many interviews, guest-appearances, and endorsements, and his song “I Wanna Be Famous” has been chosen as the theme for the new WB series Grosse Point. DeVille describes the show as a behind the scenes look at a show like Beverly Hills 90210 — there is a lot of back stabbing, which, he says most will find very amusing, if they don’t live in Los Angeles.

DeVille explains that while most are thinking of him as “cocky arrogant @sshole” screaming ‘I Wanna Be Famous,’ and feeling sorry for him because he isn’t, the song is actually meant to poke fun at the “me” attitude that is prominent today, especially in Los Angeles.

“The people a Warner Bros caught the ‘I Wanna be Famous,’ so it was a great marriage to a sit-com about people wanting to be famous. And it just lands in the shallow end of the gene pool of vanity, narcissism you know, that’s what it is and it’s a little tongue-in-cheek, especially with me coming from addictions. Wanting to be famous is like another addiction, it’s like another crime,” explained DeVille.