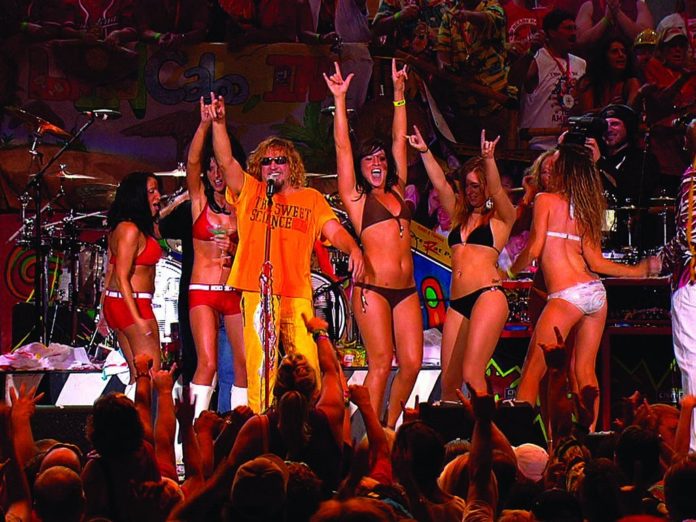 With a legendary name like Sammy Hagar (Van Halen, Montrose), one can only be left wondering if this seasoned rock star, who must be old enough to have fathered this twenty-four-year-old journalist, can live up to his nickname after so many years…

These days, the “Red Rocker” has traded in his locks for charity. And, for his past three solo efforts, respectively, Marching to Mars (MCA), Red Voodoo (MCA), and Ten13 (Cabo Wabo/Beyond), he has embraced a team of incredibly talented artists. In support of the latter, Hagar has embarked on the first leg of his birthday bash tour, which was inspired by the release’s title.

TPRS.com first caught up with Hagar and his band members, who are best known as the Waboritas, in Cleveland, Ohio on this first leg of the tour. Since the performance was recorded by a local radio station, it took place at an intimate club and unfortunately was only one hour long. Interestingly enough, the show was scheduled for an early 5:00 p.m. and the audience was completely comprised of contest winners, who were enthusiastic and clearly happy to be there.

Though he most likely gave a rather big shock to both the radio and the club audience, Hagar spun off song after song from his most recent solo albums, including new favorites like “Serious JU JU” and “High and Dry,” and most of what was in between, as well as classics like “I Can’t Drive 55,” “Rock Candy,” “Heavy Metal,” and “One Way to Rock.”

Honestly, it was very disappointing to see such a short performance, especially since Hagar is know for taking his time on stage. In fact, his set lists typically include close to twenty-five songs and last around two and a half hours. Knowing that he has often been asked to break his show into two parts with an intermission in between, it was necessary to keep in mind that Hagar would return to the stage the next evening for a full set at the somewhat nearby Akron Civic Theater.

While his first night in Ohio seemed more like a dress rehearsal, Hagar came out in full force at the Akron show kicking things off promptly at 7:30 p.m.

As many know, Hagar now travels with a miniature Cabo Wabo that hosts a ramp for special guests, and thanks to a few accommodating members of Hagar’s road crew, TPRS.com was able to hop on stage along with a handful of local contest winners to bring you the play by play.

The evening kicked off with a burst of adreneline as the band moved ahead like a steamroller, churning out high energy rockers like “White Lie” “Shaka Doobie,” and “Sally Drive” as well as those mention above which were performed at both shows.

And while this set was not as restricted, it was pleasing to find that Hagar is still sticking to more solo songs both new and old instead of using the Van Halen hits as a crutch. While many favorites from the Van Halen years did not make the set, which is obviously impossible unless Hagar would make each show a day long event, the absence of some songs like the extended “Right Here, Right Now” left room for more tracks.

With the introduction of his own record label Hagar has found a new independence. In fact, he even sells his own Cabo style drinks at the shows, and brings the intimacy of his Mexican club to the sold out performances by talking to the crowd and signing autographs when fans approach the stage with merchandise and a sharpie.

So, if you haven’t already figured it out, the answer posed at the start of this review has only one clear answer: the Red Rocker is rocking harder than ever and once summer comes you’d better buy your tickets early, because there most likely won’t be an empty seat in the house.