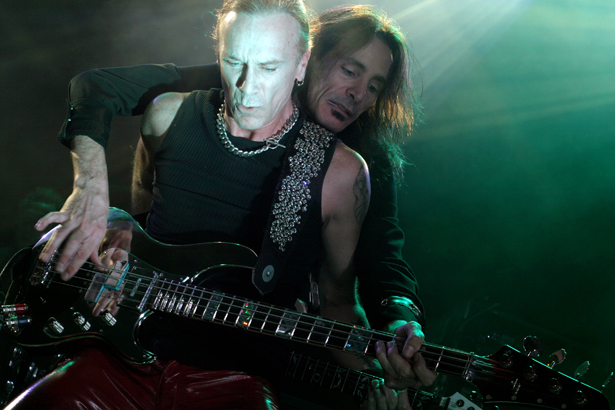 Simply oozing with talent, creativity, and emotion, Steve Vai was joined by a stellar line-up featuring Billy Sheehan (bass), Tony MacAlpine (Guitar/Keyboards), Dave Weiner (guitar), and Jeremy Colson (drums) for a show that left the audience begging for more (and more). Spanning about two and a half hours and featuring a heaping serving of rarely heard material like “Rescue Me or Bury Me” along with traditional favorites, it could possibly be the most impressive show that Pittsburgh has seen from this guitar virtuoso in the past decade.

After calling the audience in with a small tease of the fretboard, Vai and band set the pace for the evening pulling out “The Audience is Listening” second in the set. The packed-in crowd at the Rex Theater on Pittsburgh’s Southside more than enthusiastically greeted this ensemble of overwhelming talent, who were in turn grinning from ear to ear at the sight and sound of their fans.

Other favorites from his most mainstream release, Passion and Warfare like the patriotic “Liberty” were not far behind, but, what really stole the show was the mid-set acoustic medley, where Vai pulled a few old tricks out from his 1984 release, Flexable. Also noteworthy were the plentiful solos, including a smoking drum solo from Jeremy Colson and an unexpected keyboard solo from the multi-talented MacAlpine.

The highly anticipated closer “For the Love of God” was unfortunately delayed slightly due to technical difficulties with Weiner’s sitar, but a few laughs and a deep sigh put the band back on track for the heart-wrenching ballad.

For the encore, bluesman Eric Sardinas joined Vai on stage for a playful rendition of Frank Zappa’s “My Guitar Wants to Kill Your Mama,” which was followed by some heartfelt words of thanks from Vai, who was clearly appreciative for the wonderful reception received from his attentive audience.