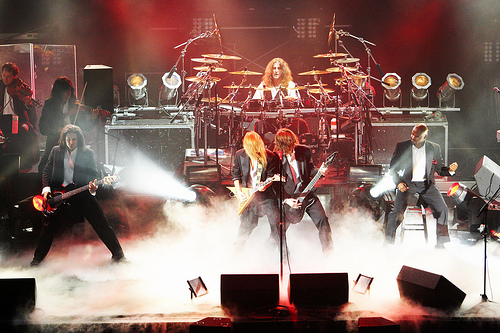 In celebration of the Christmas season and their latest release The Lost Christmas Eve, Trans-Siberian Orchestra visited Pittsburgh (to a sold-out crowd) this past Thursday for an amplified evening packed with symphonic metal orchestrations of holiday favorites like “Carol of the Bells” and Tchaikovsky’s Nutcracker Suite.

Highlights from the show included crowd-pleasers like “Christmas Eve/Sarajevo 12/24” and “First Snow,” as well as the classic duet of vocalist Steven Broderick and guitarist Alex Skolnick on the raspy Christmas Eve album favorite “Old City Bar.”  But sadly missing was the strong soulful voice of the late Daryl Pediford, who was known for this bluesy delivery of favorites like “The Three Kings and I” and “Music Box Blues.” Though there is no doubt that Mr. Pierce would have made Daryl proud.

Along with the the large ensemble of talented musicians, TSO also treat their fans to a dazzling array of lights and lasers which is a wonderful enhancement for people young and old alike.

Along with selections from Beethoven’s Last Night like “Requiem” and “Mozart/Figaro” came a spine-tingling version of “Carmina Burana” from their upcoming album, another non-holiday release entitled Night Castle left the audience on the edge of their seats salivating for the fifth release from these epic performers. For true Savatage fans, the evening also included a metal jam session (including snippets of Led Zeppelin), an arena rock drum solo, and a few words from TSO and Savatage mastermind Paul O’Neill.

Having seen this show yearly since TSO began touring, it is still a magical experience.  Over the years, the band has gone from playing small theaters to large arenas and yet has not lost the ability to connect with their fans on a personal level during the show and at their now famous post-concert autograph / meet and greet sessions.