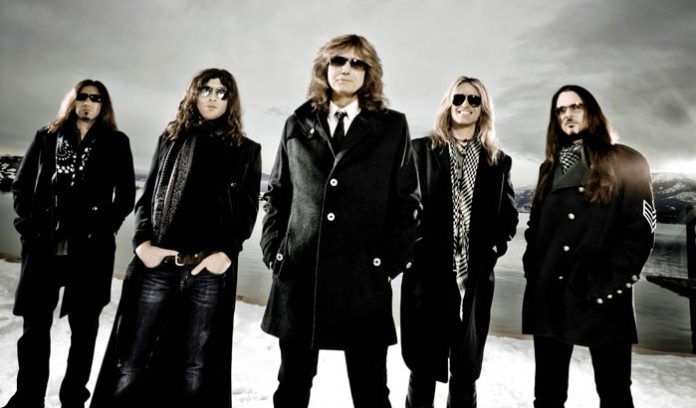 Openers Supagroup are a tight-knit foresome with lots of energy, cheesy commentary, and most importantly the kind of hard-rocking, guitar-driven music (with hooks galore) that you could find yourself singing along to after hearing their songs once or twice. With three albums under their belts, we could only wonder why we hadn’t heard of these guys sooner. By all means if you head out to see the snakes, make sure you get there early so you don’t miss these guys.

Whitesnake took things back several decades kicking the show off with the Deep Purple classic “Burn,” but otherwise stuck to cuts from David Coverdale’s eighties heyday of big guitars and bigger hair.

With bassist Marco Mendoza now performing with the likes of Virgil Donati in Soul SirkUS, it was difficult to stomach the dissolve of the long-time duo of Mendoza and drummer Tommy Aldridge, which dated back to their touring days with Ted Nugent. Though the addition of Duffy offered a youthful exuberance, and background vocals didn’t suffer much with keyboardist Timothy Drury frequently taking the mic.

While nobody can deny the amount of talent in the band, these guys still were not afraid to step-up to the challenge of proving it. From the soloing antics of guitarist Doug Aldrich and Reb Beach to the bear-fisted, rhythmic pounding of drummer Tommy Aldridge, this band is clearly a meeting of musical greats.

But, the sexy anthems like “Slide it In” and “Slip of the Tongue” are what truly left the audience reeling for more. In fact, there was literally a surge of energy that rushed through the packed-in crowd as the band struck the opening notes to “Slow an Easy” that did not waver for the rest of the evening.