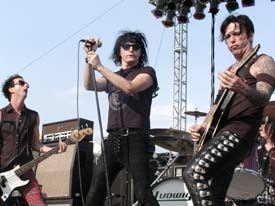 Waking things up in Massillon, Ohio, the inaugural Rockfest kicked off with a raw performance from LA Guns. These days the Guns feature original members Phil Lewis, Tracii Guns, and Steve Riley, as well as newcomers Adam Hamilton on bass and Keff Ratcliffe on rhythm guitar.

The band’s set kicked in with a down-n-dirty favorite “Sex Action,” but the big surprise was the song that followed, “Wheels of Fire,” which they probably haven’t played live for almost a decade. Another new addition to their live set was “Waking the Dead,” the title track from their new album, which is due out this August.

Before long fans were treated to a unique guitar solo from Guns, using a violin bow, as well as other key songs from the past like “Never Enough” and “One More Reason.” Mid-set things did slow down, however, as they played their hit “The Ballad of Jayne,” but only because they have to, said Lewis.

The finale was “Rip & Tear” as is often the case, but those who are used to catching these guys in clubs were left wondering, why they left out other cuts like “Electric Gypsy” and new material from Man in the Moon (Spitfire), the first full studio release featuring the reunion of Guns and Lewis. But, with only thirty minutes, there was a lot of ground to cover.

Prior to the band’s performance, bassist Adam Hamilton, who joined LA Guns for the first time on their release Waking the Dead (Spitfire) told TPRS.com that while the initial new studio release with original vocalist Phil Lewis, Man in the Moon sought out a more organic and Zeppelinesque approach, he prides himself on helping the band go for darker plan of attack with Waking the Dead.

He says, “When I got in the band, I said ‘we need to really go a little more dark and edgy and raw — straight ahead like old LA Guns was back in the days of Vampires and Cocked & Loaded.’”

Hamilton says that if you are an LA Guns fan, you will love the new record because, it features a lot of material that Tracii Guns had been saving up for years. And with them being the only dangerous band on the Rockfest tour. They joke, because, who knows what’s going to happen when LA Guns hits the stage…”But that’s what rock-n-roll’s is all about,” says Hamilton, “The unpredictability of it, and that’s what makes rock-n-roll excitement and there’s not a lot of that these days.”

Hamilton was a huge fan of the band’s first three albums, and that was kind of the direction they planned for with this release. He especially had hoped to bring in influences from his favorite bands like the Cult. And that mentality lead to much darker material and a lot of darker chords, helping earn this release a comparison to Cocked & Loaded.

Andy Johns, who has worked with Led Zeppelin and other classic rock artists like Van Halen and the Rolling Stones was supposed to mix the album, but Hamilton says, “at the last minute he just decided to come in and stay and help us do it.” And, the band seems very pleased with the result.

“You know we were going to produce it ourselves. And he said, ‘I’d like to work with you guys and just do it’, and so we let him on mainly because it was better to sit around and get all those stories straight from the horse’s mouth — To hear what all happened back in the day.”

Rockfest shows feature the album’s title track, which showcases classic Lewis screams. In addition, some live sets also feature “Psychopathic Eyes,” “Don’t Look at Me that Way,” and “Revolution,” a track that Hamilton had initially written for a movie soundtrack. Fortunately for LA Guns that movie got pushed back, and after putting lyrics to the piece, it became on of the strongest tracks on their new release. Hamilton explained that obviously given such a small time slot on the multi-billed tour, they can’t fit in much new material, but they are doing the best they can.

Fans who may recall Hamilton from Joey C. Jones & the Gloryhounds are probably wondering how he ended up playing bass, but he explained that while he did indeed play drums for the Gloryhounds, he has actually been playing both instruments sided by side for years and he just jumps on whatever gig is available that he thinks he’d enjoy most.

Despite the mutli-bill packed summer, Hamilton says that the variety out there this year has not hurt the tour, in fact, with the way things have been criss-crossing, they’ve done very well and the low ticket price has made it very affordable for fans to hit the other shows like the Poison Tour and Rock Never Stops tour as well.

Prior to hitting the road, the Guns finally snatched up a new fifth member, Keff Ratcliffe. Hamilton says, “We’ve been thinking of adding another guitar player since Mick Cripps left a couple years ago, for a while. And, we just know that the LA Guns sound is five guys.”

“So, we basically had a couple people in mind. Instead of auditioning a couple people, he was like probably the first guy we thought of. He had played with Phil before, and he’s about the only guy in Hollywood that’s cool enough to play with us.

Keff Ratcliffe says that he’d worked with Phil Lewis in the Liberators, and that Lewis also being from England has been a “huge inspiration” to him, and now he is also pleased to be working with Tracii Guns. He says, “Tracii is just phenomenal, I can’t think of any guitarist that I view any higher. And then Steve is just fantastic, and then with Adam being in the band, Adam’s just a genius everywhere.”

While Hamilton knows that the original LA Guns was so great, he feels that with this line-up has they’ve finally gotten to a point where they are kicking @ss on a whole different level than the original band did, and he says that they are all here to stay.