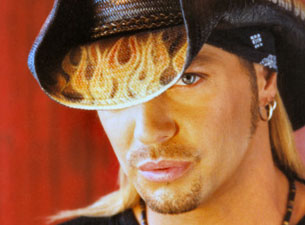 With the eighteen-year success of Poison and forty-years of life behind him, Bret Michaels has released what he’s calling a “personal snapshot” of different moments in his life.  The album, entitled Songs of Life has been a work in progress for many years.  It offers fans pieces of his past, including “the good and the bad and everything in between.”

Most importantly, Michaels says “I just want to tell fans that I really put my heart and soul into this, it was a labor of love, and I think it has a lot of great songs on it.”

“Sometimes when I’m on the road, it’s almost therapeutic cause I can just sit and write, and the road’s going by.  It gives you time to soul search or express yourself, and that’s where I found time to write this,” he explained.

“I’ve always wanted to do a solo record.  I love everything I write with Poison and have no intention of ever leaving the band… I’m just one of those guys, I really love being around music, it’s my form of self expression and just like the film company that I do with Charlie Sheen or any of the projects that I do, I’m really a person that’s a creative person but I’m also very driven.  I’m not one of those people that just kind of lets it slip by, I like to write music and play music and I like to record it.  I love being around gear and the studio.  It’s exciting for me, still…I always dream about doing different stuff creatively but music is my first love, hands down.”

Coming from the small town of Lyndora, PA, just outside of Butler, PA, and growing up on country and classic rock, Michaels may have dreamed about success, but “never thought it would actually happen.”  He attributes his accomplishments in music, TV, and film to his determination to go out there and try, and has drawn his influences from the great story-telling songwriters that he was introduced to as a child.

Interestingly, his father’s love of country music turned him on to a lot of artists like Hank Williams, Jr., Patsy Cline, George Jones, Tammy Wynette, and Lorretta Lynn at an early age.

“Those people wrote great songs and they told really good stories,” he notes.

So, it is no surprise that when Michaels got an offer to do a contemporary country album from Curb Records, he gladly accepted.  He says that eventually within the next couple of years, he will be writing with Kenny Chesney.

On the flipside, this current release, Songs of Life, plays off of Michaels’ great love for rock tunes and hard rock music, and it is no surprise that he sites the obvious rock favorites (Aerosmith, KISS, AC/DC, and the Rolling Stones) as his personal influences.

“Although, they all had images, they wrote great material, and that’s what makes you stay.  After 18 years believe me, its not the image any more its about the music and the attitude,” said Michaels.

Everyone knows that no matter how determined or talented a musician is, they can’t go far without the support of their fans.  And, whether it means spending two hours after each show meeting the members of his fan club, or inviting an entire city back for another show on the band (as Michaels had done at several shows last year) one thing that will never be disputed is his appreciation and gratitude for his fans.

“I really try to make my web site and my fan club very fan interactive.  And a lot of fan clubs don’t do that.  They take your money and send you a newsletter six months after they did something and you already knew about it.”

But he owes his fans even more than one may think, “I get a great energy and a great vibe from the fans, and they help influence me to always keep the faith, and they get me through some tough times.  Sometimes when my diabetes has got me down or just different things sometimes those fans cheer me up.”

Following this summer tour with Poison, Michaels will touring on his own, beginning in Cincinnati, Ohio on September 26 for the Songs of Life tour, which is “basically an intimate rock experience with Bret Michaels.”  Michaels says, that it will not only be a great rock event, but also a storyteller’s night.  He plans to bring a full band along for the party, and promises live performances and commentary about the stories behind the lyrics and the music.

Tesla’s Brian Wheat Introduces himself in “Son of a Milkman”