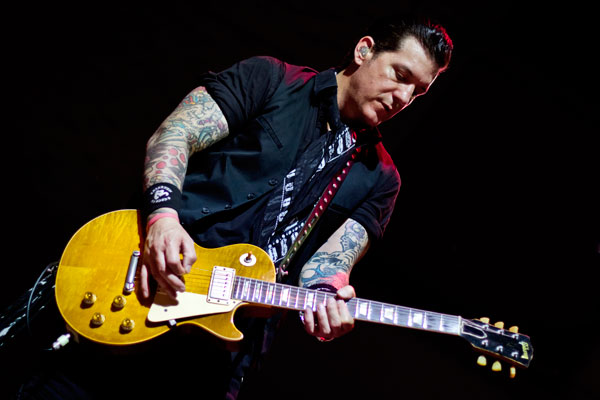 After a scorching self-titled release on Dreamworks Records, hard rock’s new torchbearers have returned, mixing their varied influences into an energetic, sexy, and adrenalized sophomore release entitled Time Bomb. And while they’ve opted for a more symbolic album cover revealing a disgust for censorship, a single listen will also reveal that the band that brought us “Lit Up” has returned with screaming guitars and seductive and controversial lyrics that explore everything from alcoholism to pornography. In short, a clear message that they won’t be going away anytime soon…

Buckcherry has fueled the fire behind the buzz by hitting the road with acts like KISS, Lenny Kravitz, and most recently Monster Magnet, bringing their message to the masses and leaving many wondering how they’ve managed to not only break into a scene that has turned its back on bands of their kind, but also score a #1 Mainstream Rock radio hit and a gold-certified debut album.

According to guitarist Keith Nelson, the band had looked at their future anticipating that major labels weren’t going to be interested, but they proceeded regardless expecting to do things the hard way and become recruits for an independent label. But, after a couple of years, that hard work and perseverance paid off when they got an unexpected break.

“I think that if there was any kind of break to be had, it was simply because we wouldn’t take no for an answer, we just kept going…We were very self-motivated we booked our own shows and made our own t-shirts and our own demos and whipped off copies of those. It’s the Cinderella story of the band in the van — on their own, doing their thing. And when we actually got record labels interested in us we were really surprised,” says Nelson.

The foundation for their success was laid out when Buckcherry’s major writing force, Keith Nelson and vocalist Josh Todd, met through their tattoo artist. According to Nelson, he was actually tattooing the two of them, and when he suggested they meet each other, the two we hooked up, started to write songs, and the rest kind of just fell into place.

When witnessed live it is clear that the chemistry generated by incorporating historic influences that range from Prince and Michael Jackson to Aerosmith and the Rolling Stones with a modern sound and their own charisma, Buckcherry blows their audience away.