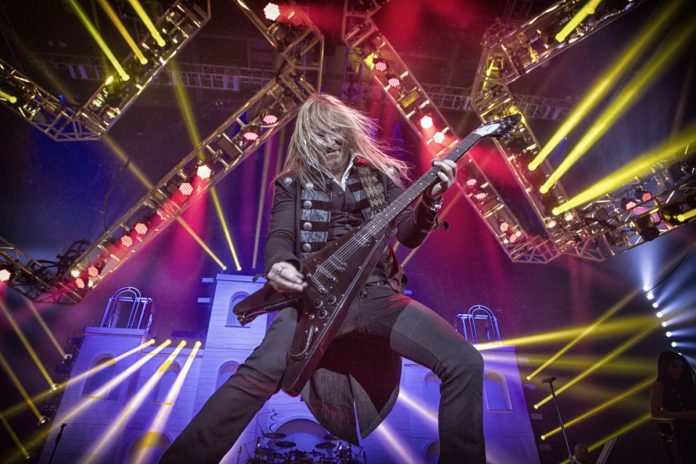 Chris Caffery of Trans-Siberian Orchestra and Savatage took the time recently to provide The Pure Rock Shop with an in-depth interview regarding TSO’s 2016 tour which you can listen to below:


During our 25-minute interview Chris talks about the year-long planning that goes into keeping TSO on the road.  Chris also discusses the physical toll the tour takes on himself and why conditioning is such a critical part of his daily regimen.  Furthermore, he talks about what an important role nutrition plays in keeping all the members of TSO East Coast and West Coast healthy and in top performing condition.

In a moment of reflection during our lengthy conversation, Chris talks about the early years of TSO and how the shows have become a yearly tradition for families…in some cases three and four generations of family members are together to enjoy the concert.

The Trans-Siberian Orchestra kicks off the Ghost of Christmas Eve 2016 tour Thursday November 17th with 2 shows at the Covelli Center in Youngstown, OH and in Council Bluffs, IA with a show at the Mid-America Center.

If you have never had the opportunity to see TSO live, it is an incredible experience and your family or friends will never forget.

Here is a 1999 interview with Paul O’Neill and Chris Caffery we conducted during Trans-Siberian Orchestra’s first tour.

“With more than 10 million albums sold, TSO has inspired generations of fans to rediscover the multi-dimensional art form of the rock opera. Meanwhile, on the road, they have become one of the world’s top acts, with Billboard magazine naming TSO as one of the top touring artists of the past decade – a $20 million-plus production that has played to over 100 million people in 80+ cities, selling more than $280 million worth of tickets and presenting $11 million to charity”. – Trans-Siberian Orchestra about page.