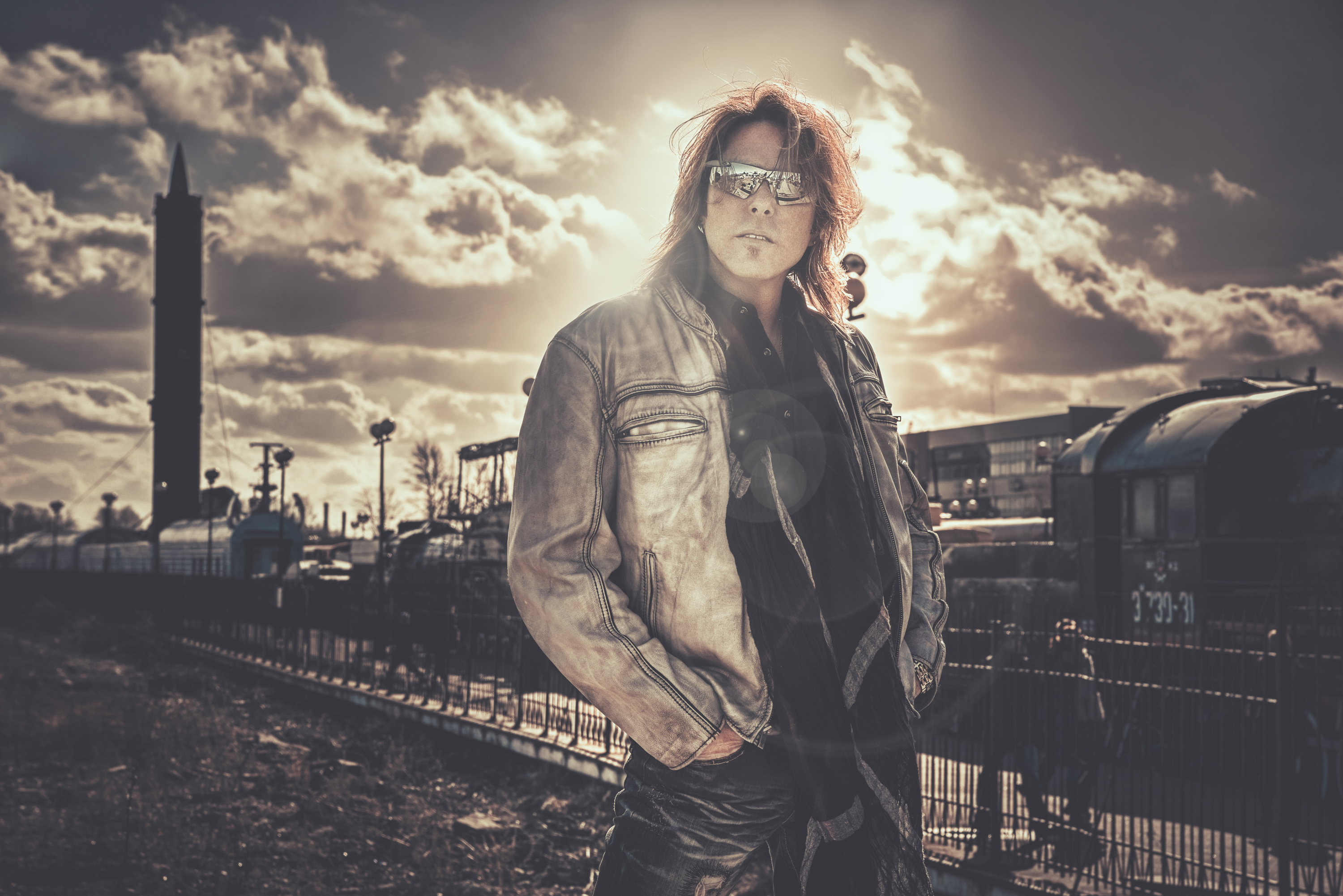 Growing up in Bradford County, about 2 1/2 hrs East of Pittsburgh, Pennsylvania, DC Cooper’s first live vocal performance was with his uncle’s band at a bar in Johnstown, PA at the age of fourteen. Cooper explained that he came from a musical family. His brother played drums, his sister played the sax, his father taught him about singing, and his uncle was in a band that played songs in the southern rock vein.

While in school, Cooper became a member of the band XCaliber, which played locally at parties. His career then took a more serious turn when he joined a band in North Carolina called Steel Rage, who played the club circuit, touring up and down the East Cost with a motor home.

Eventually, Cooper made his way back closer to home, and joined Pittsburgh legends, The Toast Band, who he sang with for three years. While in Pittsburgh, he later formed the Tung Bandits with a couple Pittsburgh musicians, playing local clubs and traveling to New York city at least once a month for four or five days at a time trying to sell the band to major labels.

In lieu of the pending disappearance of commercial rock and metal, and after hitting many dead ends and hearing things like “That is not really what we need right now”, and “That’s not what we’re looking for,” Cooper’s manager suggested that they start shopping DC alone. And that is how Cooper got his first big break.

At the time, Judas Priest was in search of a replacement for vocalist Rob Halford, and Cooper joined in the competition, becoming one of four finalists. He said that auditioning with the band was the highlight of his career, however, before the final decision was made, he was given a nice offer to sing for the Danish melodic rock band Royal Hunt.

With the Judas Priest situation up in the air, Cooper soon left home with a round-trip plane ticket to his destiny in Europe. He did twelve rehearsals with Royal Hunt and made his first appearance with the band only three days later in front of crowd of screaming fans in Tokyo, Japan.

Though the pressure was on, Cooper said, “I knew this was what I wanted to do. I always said that I just wanted the opportunity to try to make my mark and take my chance, and they gave me my chance – my opportunity – and there was no way I was going to go out there and blow it.”

And as history tells, Cooper certainly didn’t blow it, he spent nearly six years with the band, and recorded two studio albums, two live albums, two live videos, and two maxi singles with them. He also won the hearts of many fans, especially those in Japan.

In fact, his first year with Royal Hunt, he surfaced on the BURRN! Magazine reader’s poll as the #4 lead vocalist, beating out many other seasoned vocalists, including Jon Bon Jovi. He then went on to take the #1 slot in the same category for the next two consecutive years.

Looking through the magazine poll results show that while Cooper hit #1 in 1995, Ozzy Osbourne, who had been #3 the previous year, fell to #26; John West, the current vocalist for Royal Hunt, was #40,; and Royal Hunt, came in at #3, for the best band poll, beating out Judas Priest and even Metallica.

Cooper explains, “The connection I have, especially with the people in Japan is very personal, they know so much about my personal life, and I’ve opened myself up to them” He says that his life is an open book, and he is very dedicated to his fans. He has no problems standing around for hours to greet his fans and sign autographs, and he has even taken courses and learned to speak Japanese.

After going strong for many years, Andre Anderson, the leader of Royal Hunt made an announcement that the band was going to take a break for a year at the completion of their Paradox World Tour. Though Cooper understood that everybody could have used a little break, he figured that with an entire year free, he could use the opportunity to write his own material and help produce his own album, though the band didn’t share his enthusiasm about a DC Cooper solo project.

Cooper said, this was the perfect time to do his own project, but while Cooper formed a band with musicians that he had met, listened to, and respected over the years, Royal Hunt later went on to replace him with vocalist John West.

Wanting 100% of their talent, but fearing that they would hold back because they were not working on music for their own bands, Cooper says that he was really pleased. “I can’t say enough about the guys that I worked with, cause it ended up being a team, I never considered it a solo album, I wanted to name it as a band, which is why it was subtitled “The Alliance” which is already taken by somebody else.”

He says that he couldn’t ask any more of them because they gave him so much of themselves. For his next album, however, there may be some member changes depending on the schedules and availability of the current members, but Cooper was hesitant to disclose anything prematurely. Though, he did mention that a drummer he has been talking to is a really big name and will cost a lot of money.

While Cooper hopes to have his next DC Cooper album released by the end of next year, he has been keeping busy with other projects, including a new band that he is very excited about. The band is called Silent Force, and it was formed by Cooper, along with guitarist Alex Beyrodt (Primal Fear/Sygnet).

Silent Force includes drummer Andre Gilber, who according to Cooper, is young enough not to have been burned by the industry, but more importantly, has timing that is so close to perfect, he is a very rare find. Another young talent, Tote who has studied piano ever since he was eight years old, will be handling keyboard duties, and Leisch, who has worked with Joey Belladona, will be playing bass.

Cooper says, “I’m taking maybe a little bit of a chance with these two guys (Tote and Andre), especially because they don’t have a lot of experience, but they do have the youth on their side and they can be kind of molded a little bit, I guess.”

Their first album has already been written and recorded and they have a deal set up in Japan to release the album on JVC Victor Entertainment. According to Cooper, the material has traces of Judas Priest and Queensryche, and even a little bit of Kansas, and it is very strong. In fact, their four song demo has already made it into Germany’s Breakout Magazine’s Top 10.

Cooper summed things up by saying:

“I feel that God gave me a talent and he gave me a gift, and what I do with it is my gift back to him. So, I want to try to work as hard as I can and do as many things as I can and work as long as I can.”