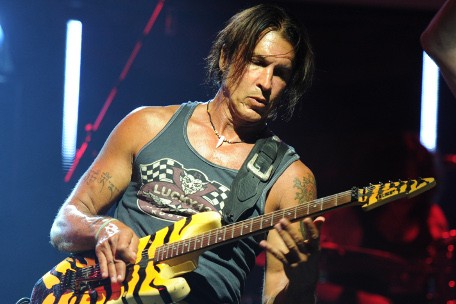 As one of the most respected guitarists of his time, George Lynch has been blessed with many endorsements, including a signature series of ESP guitars, which he promotes through a handful of guitar clinics each year.
When TPRS.com recently caught up with him in Pittsburgh after a clinic at Midnight Music, we got the scoop on the demise of the last version of Lynch Mob, as well as some exciting news. He has new project called Stonehouse, which features Matt Kramer (Saigon Kick) on vocals, and he has formed a new version of Lynch Mob with former vocalist Robert Mason.

Lynch Mob
When Lynch parted ways with Dokken once again, he had gone into the studio with the original Lynch Mob featuring Oni Logan (Vocals), Mick Brown (Drums), and Anthony Esposito (Bass), and recorded a three-song demo called SYZYGY, which was only released in Japan. The demo was recorded for the record company and they had fully expected to get a deal, but after choosing to do a short tour first, Logan backed out and Mason wouldn’t serve as a replacement because his financial expectations were higher than what the band would be bringing in.

Lynch says, “Things started to go screwy right before that tour.” Without a singer, they had been forced to hit the road with a somewhat thrown together version of Lynch Mob, which featured vocalist John West (Royal Hunt), who had auditioned by singing over the phone and only rehearsed once with the band before touring, as well as a replacement drummer. Thus, the tour ended up serving more as a means of keeping commitments to promoters and fans.

And when Lynch decided to start fresh with a new band that offered up more of a heavy rap sound than the familiar Lynch Mob melodies, the labels all passed on the Smoke This album. He says that they were very lucky to put it out at all, though in hindsight he jokes that maybe they shouldn’t have put it out and most Lynch fans seem to agree.

In fact, after the third version of Lynch Mob released their debut album, they started touring, and the dissatisfaction of his fans ultimately ended the band. Lynch says, “It was a disappointing tour that basically demoralized the band and we broke up. Really, the rest of the band was into it but the lead singer took a large percentage of the heat for that (fans’ dissatisfaction) because he was on the front line.”

After the band’s brake up, Lynch says he “went back down the same road looking for Oni.” But after receiving about ten songs from Lynch, and expressing interest, Lynch says he “never heard from him (Logan) again.”

“I probably left like thirty messages, and he and Anthony had left some sort of funny message on my Web site to the effect that they had tried to contact us and we hadn’t returned their calls, which is absolutely a lie because both I and my manager had called them probably a total of fifty times.”

Over the years, Lynch has forgiven Logan for many things and wiped the slate clean, and though Lynch says he “has been pursuing this guy for years,” he keeps coming up empty handed. So, for now, he has given up on trying to work with him.

“I kept going back to the guy despite the fact that he had burned me, cause I really believed in his talent…I thought we really could have made an amazing record together…but I guess we’ll never know what we could have done again.”

Instead of being taken in by the endless pursuit of Logan, he has chosen to take another attempt at Lynch Mob with singer Robert Mason. However, Mason is also slated to fill the vocal slot for Ratt, in the absence of Stephen Pearcy, who quit the band to form his own project called Nitronic. Lynch says the current plan is for them to work around Ratt’s schedule and record at Brian Wheat’s (Tesla, Soulmotor) home studio.

Stonehouse
There is an even happier ending to the story, because, “After working through Lynch Mob with Smoke This, that version of the band that is no more. I hooked up with Matt Kramer from Saigon Kick, who is every bit as inspiring to me as Oni was to work with, if not more so.”

He explained that Kramer is a lot broader in his abilities and he is also a hard worker. Though Kramer is a bit eccentric and artistic, Lynch understands where he is coming from and says that he is “willing to put up with anything to work with the right guy,” and is very grateful that his manager introduced the two of them.

Lynch compares Kramer’s vocal style to that of Perry Farrell (Jane’s Addiction), yet he says at times he sounds like Logan too. Though Kramer and Lynch are both very versatile, Lynch says that this album is going to be focused on a single statement and their chemistry is incredible.

“What I’m really excited about with this project is that it’s not a lot of different things. It’s not very diverse.” He went on to say that in his wildest imagination he could not imagine that this stuff would not be recognized and appreciated.

“If it isn’t then there’s something wrong with me. Then, I have a false perspective on what people like or reality or something, cause to me this sounds like the perfect band.”

They haven’t started looking for a record deal yet, because they want to make sure that the songs are absolutely right. After the tweaks they plan to have a photo shoot and put a package together prior to looking for a deal. Right now they have almost completed six songs, and Lynch says that he has all the music for a complete album, “it is just a matter of us sitting down and finalizing it.”

The Bottom Line
Lynch has also worked on several recent projects, which have been released on Cleopatra records. He explained “Cleopatra will put out all of these tribute records with different people producing them. I worked with a couple of different entities that produced these records, that all end up on Cleopatra.”

In reference to the recent Scorpions tribute record that Lynch worked on, he said, “I did, I think, ninety percent of the solos on it myself. I was really well paid, but unfortunately they used all of the scratch (warm-up) tracks – they didn’t use the solos.” In his own words, Lynch says “I wouldn’t recommend it…its just horrible…my luck, that’ll be the big seller and people will judge me on that.”

He will also be featured on guitar for the song “Paranoid” on an upcoming tribute to Ozzy Osbourne entitled Bat Head Soup, along with Vince Neil (Vocals), Stu Hamm (Bass), and Gregg Bissonette (Drums). The album will be produced by Bob Kulick and Bruce Bouillet and is scheduled to be released on August 8th in Japan and then later in the US.