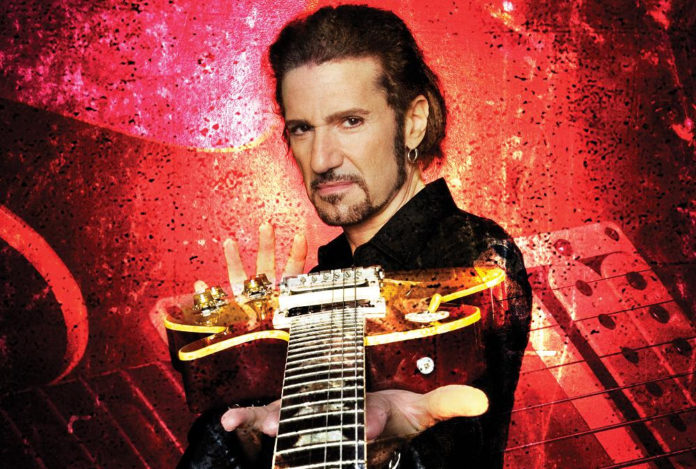 In August of 1996 KISS made history reuniting the original band members and leaving guitarist Bruce Kulick and drummer Eric Singer out of work. Though Kulick continues to do performances at KISS-related events and is still on great terms with the band, it was time for him to take charge of his own career.

Along with vocalist/guitarist, John Corabi (The Scream, Motley Crue), friend and drummer Brent Fitz, and a bass player named Jamie Hunting, who was discovered by Fitz and Kulick in a Hollywood club, Kulick formed the band Union.

About a year after, they released their self-titled debut album, which was recorded in Los Angeles and produced by Kulick, Corabi, and Curt Cuomo (Kiss). The album has recently been re-released by the band’s new label, Spitfire Records. And now, a few years later, the band has moved into the twenty-first century with the release of their second studio album, The Blue Room, which was recorded at the home studio of producer, Bob Marlette.

According to Kulick, they were really able to accomplish a very big sound for the record. “I was really pleased with the whole record actually. It shows growth in the band and absolutely stays true to what we like.”

He explained that between him, Marlette, and Corabi, they had a lot of guitars lying around. So, the band had a running joke that they had to use every guitar in the room. For instance, “Shine is a song that just has like a ton of acoustic and electrical instruments all over the place.” But Kulick stressed that they really only did what worked for the song, and went on to say that “It was fun to actually make it layered and create the sounds that really brought the songs alive.”

As for their live performances, Kulick says that “there is no way that you can do all of those textures, combining the acoustics and electrics when you play live.” However, with Corabi playing guitars as well and Hunting using his 12-string bass guitar for at least half of their set, they still get a very big sound live.

Kulick said, “You’d be surprised how forgiving it is when you see a band live sonically. Our music is still stripped down to four pieces, but we play well so we get through it all. It actually is quite an interesting transition when we do some of this stuff live, but some of it is really easy to transfer. ‘Do your Own Thing’ sounds virtually the same.”

While writing material for The Blue Room, Kulick had also been working on two projects in memory of the late KISS drummer, Eric Carr. One was a video about Carr’s life and the other was an album entitled Rockology, which included leftover demos that had never been released.

Since Union’s producer was very clear about writing and singing songs about things that were real to them – things that they really felt – Kulick said “It was pretty clear to me that I could certainly write something about Eric and it would really be very important to me.”

Though it was a difficult thing to do, Kulick wrote and sang the song “Dear Friend” about Carr. He said that it was very sincere — he is very proud of the song and the fact that he was able to lyrically say what he wanted to say and express his feelings about losing a friend.

In the past, Kulick had only sung lead vocals on two other songs. The first was the song “I Walk Alone” from the KISS Carnival of Souls album, which Kulick called “ironically pathetic,” lyrically, and the second was a bonus track on the Japanese version of the first Union album called “For You.” He believes that of the three, “Dear Friend” showcases him the best.

Kulick said that “There was a period of time after the (debut) Union record where we were without a home record deal wise, and we didn’t really know what was going to happen. ” During that time, he began working on a solo effort, and the band recorded a live album.

Kulick says that they were fortunate to have recorded some great performances and to fill the gap between the two records, since they knew that The Blue Room wasn’t going to be released for a while. They were given the opportunity to record their live album while opening for Cinderella when they were recording for their upcoming album on Deadline Records. They recorded while performing at the Galaxy Theater in Santa Anna, CA, and released the album Union: Live in the Galaxy on Deadline, while Cinderella went on to record additional material and release Cinderella: Live at the Key Club that same year.

Also, since Kulick is always trying to keep together any song ideas showcasing himself, that aren’t particularly for a band, he recorded a couple of songs, not knowing what was going to happen to the band. He said that at the time, it was not that he didn’t want Union, he just didn’t know if anyone wanted them.

“All those plans for a solo record are really on hold right now, because I’m so proud of what Union has created and how we’ve grown as a band. And obviously when the time is right I will get back to work on that. Who knows if I will even keep the three things that I’ve recorded – I might just start from scratch or dig deeper into old material that I have from the KISS years even .”

Kulick went on to say that having a band and working to promote a band is a lot of work and there is no time to do it all… “People say ‘Is rock dead?’ Kulick says, “No. It hasn’t gone away, it is just maybe not on MTV.” To get the word out about their new album, they have been involved in many publicity events including gigs for radio stations, in-store record signings, and Internet chats, in addition to their current U.S. club tour.

They will also return to Sweden this summer for a few shows and a gig at the Sweden Rock Festival in Solvesborg, along with Alice Cooper, Dio, Yngwie J. Malmsteen, Saxon, and others. (Details and updates are available at http://www.kissarmysweden.com.)

Union was also hoping to hit the road with Poison tour this summer, “…Bret (Michaels of Poison) is a friend of mine he heard the new record, really loves do your own thing and the rest of the album and was really pumped about getting us one the bill,” said Kulick. Unfortunately, the promoters were less than thrilled with the idea of having five bands on the bill.

Kulick said, “He (Michaels) is in business with them shall I say, and it’s a little hard to twist their arm, when they’re the ones running the show….it doesn’t look like it is going to happen, but I know it’s not because of the music or anything, it is just the politics.”

He went on to say that he was flattered that Michaels was that excited to try to push Union’s way onto the tour, and that they will get out there with some package at some point, for now, they just plan to figure it out as it comes.

As for their future with Spitfire records, it will ultimately depend on the success of The Blue Room. Kulick says that it is basically an album to album situation, “If they still believe in you, off you go…I know that we gave them a strong album so now it is up to everybody to let people know about it and get them to buy it.”