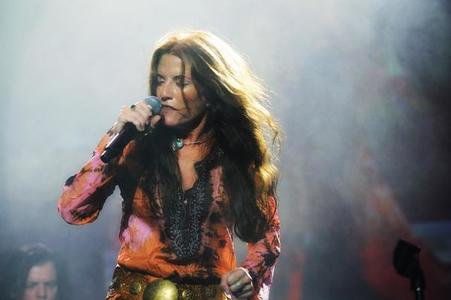 After watching her perform at a New Jersey club over five years ago while visiting a friend in New York, guitarist Ian Hatton (Bonham) pursued vocalist Katrina Chester until the band LUXX was formed. According to Chester, singing in that bar that night changed her life…

“He just didn’t stop bothering me for two months, he ended up staying in New York. I guess once he heard me sing he just knew there was something he wanted to get involved with. He tells it a different way, you know, but I’m not going to talk about myself like that.”

Though she was totally spooked out by Hatton at first, she did get together with him and once than began writing, they recruited a guy named Tony Fennell to play bass and later added Dave Silver on drums once they began performing live.

“I quit my job like a week later, and we wrote the whole first record in like three months…we got signed to a label nine months after we formed. So, it was too soon. We weren’t ready.”

After getting out of their bad deal, the band has released their second album, Hydroponic, on their own (by choice), writing, producing, engineering, and mixing everything themselves. In addition, they have been touring nationally without label support, making only enough money to eat, put gas in their van, and stay in hotel. But, it seems that their dedication has paid off.

Chester said, “Finally, things are pretty amazing for us. If I was going to give any advice to a band I would do exactly what we did.” She explained that you don’t want a label right away. If you can get an agent to believe in you, and get a couple of thousand dollars for a van and a tech, etc., hit the road. But she stressed that you have to be business smart to succeed.

Chester first learned about the music business at a very young age from her father, who had made her very “hard” and “dedicated.” She explained that with her father being a drummer and a teacher, she was introduced to music, the business, and musicians at a very young age. “My dad, he taught me everything I know really,” said Chester.

She actually began singing at the age of five, doing commercials for companies like Kay Bee toys and Lenders Bagels. Being a big Linda Ronstadt fan as a kid, and getting into Billie Holiday at age six, Chester learned to sing the blues when she was only seven or eight years old, and then, started her first rock band and began playing out in clubs at age thirteen. But after her father died, things took a turn for the worse and started to go wrong for her. “It messed me up and that turn of events in my life stopped me from joining rock-n-roll bands.”

At that time, Chester started working with producers that wrote songs for her and wanted to turn her into a pop artist like Mariah Carey or Britney Spears, and from the time she was seventeen to the time she was twenty one, she hit countless dead ends with many producers. She says that “it was horrible” and that she “hated every minute of it,” and she thanks God that no labels every heard the material, because then there wouldn’t be LUXX.

Now, with LUXX, it seems that success is on the horizon. A recent change of events has led the band to reconsider their choice of not being on a label. “We really felt we needed to build up more of our own balls and be able to get out there and do it ourselves first before we could offer something to a label.”

About a month ago, they began talks with Paul Geary Management, and they have just signed former Extreme drummer and current manager of Godsmack, Paul Geary, to a management deal. Since the beginning, Chester has been managing the band, but she says now, she is “ready to give up the reins.”

Already, with Geary behind them, they have three record labels after them, and are planning to cut their tour short to return home and figure things out. And Chester says, for the first time, she is just going to be the singer.

“I’m not going to be the manager and I’m going to sit back and let Paul tell me what to do.” But she plans to keep control of her Street Team, which she developed after watching everybody else do it wrong.

This elite group of people is dedicated to promoting LUXX near their hometowns, and prospects for the team must actually be accepted before joining. Chester says that the team is like a club and if the members don’t work, they get kicked off. They all work very hard, and the dedicated team captains even go to radio and retail for LUXX, just like record company reps would. But they are well rewarded. After working to promote three shows, team members get a laminate that gets them backstage access and free admission to the show, and those who promote a single show still attend free.

Chester takes the team very seriously and won’t let anyone take it over. She says that she considers them to be like a family and knows each one by their first and last names. “They mean the world to me, these people take the time out of their day to help me with my career, and all they want is just to be a part of it and all I want is for them to be a part of it.” In fact, she has plans to close off admission to the team soon, leaving only the dedicated people who believed in LUXX from the start as members.