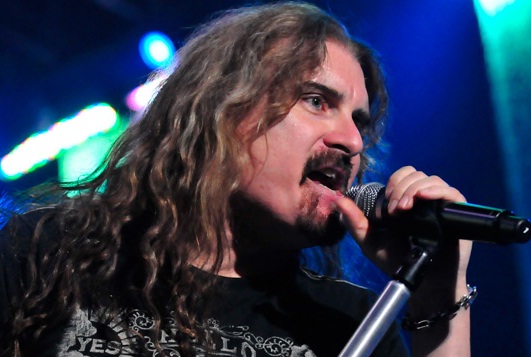 Dream Theater vocalist James LaBrie has always anticipated doing a solo album, but it was not until Magna Carta Records approached him that that dream became a reality.  Ironically, it was not at all what he had thought it would be.

He says “Originally I was thinking, when I do want to do something like a side project or a James LaBrie solo project, I was actually going to go more in the vein of something like Sting – or even George Michael…music with still a lot of intensity, but I think more of a pop element going on or a more accessible element, ’cause I wanted to do something completely different from Dream Theater.”

But, when he started considering Magna Carta’s offer, thinking about the bands that they’re affiliated with, and talking with the people he was going to write the songs with, LaBrie says, “For some reason, it just naturally went in a more hard rock/progressive direction,” and at that point he knew it was time to blow out that whole pop approach, freak everyone out, and come out with a real hard rock album.

What’s in a name?

“Basically, with the first album, Elektra (Dream Theater’s record label) was aware that I was going to do a solo album, and at that point in time didn’t want me to use my name. They didn’t mind it being inside, they didn’t mind my picture being on the back and so on and so forth. But they were basically saying at that point, if you do an album with us, then you can have James LaBrie wherever you want it.

So a that point I started thinking, ‘well ok, I’ve got to come up with a moniker, a band name,’ which I didn’t have a problem with, because in a way it gives it more of a band outlook…If you put someone’s name on it then you become the focal point and it’s basically based around you, which to a certain degree that is true. But, I wanted from the very beginning of this – I wanted it to be approached in every possible way as a band, like a new band starting.”

LaBrie says that when he began thinking about names, he had to start thinking about the way the whole project was coming together, which he admits, was kind of bazaar. “Getting together with people to write songs that I had never really worked with before – doing a lot of it from long distance like via FedEx,” he explains.

“So, I thought it was kind of a hybrid experience, and I started thinking about the lyrics too that I was writing, and they were dealing with a lot of communication problems: like people who just had problems expressing themselves or on the other side people not allowing people the time to actually express themselves or get to really know the person before placing judgment.”

According to LaBrie, all of this lead him to just sort of pondering everything that he was thinking about, which can quickly be defined as MULL, and the lyrics he was writing sparked the idea of sniffling or gagging and lead him to the term MUZZLE. Joining the two as MULLMUZZLER, LaBrie made sense of it all, putting an explanation behind the name summing up the whole experience of the project and the lyrical meanings behind the songs on the band’s debut.

Yet, when LaBrie once again had an opportunity to plead his case with the business people at Elektra prior to the release of his second Mullmuzzler album, he still sought after and finally earned their approval to add his own name to that unique title, and the band officially became “James LaBrie’s Mullmuzzler.”

He explains, “Obviously I’m able to do something that I’m very passionate about, and it allows me to have a very charmed life to a certain extent, that I’m able to do what I dreamt of doing as a child. But, you still have to be able to sell.

The label Magna Carta and everyone else affiliated around the world, when we were selling the first Mullmuzzler, found that there was an educational process going on as far as people not really putting it together and going ‘Who the hell is this Mullmuzzler? What would that be, what kind of music?’ And they thought that with the name around it, it would have been more immediate because people would obviously know my connection with Dream Theater and think that the music at least has to be somewhat in that vein or that style basically.”

When it came time for Mullmuzzler 2, the band’s moniker was not the only immediate change for the better. Instead of the “bazaar” writing efforts taken with the band’s first release, they worked more closely, setting aside time together for the second release, and developing a more mature release than their first.

“I think the benefit of actually getting together is that you’re in the room and you’re ‘vibeing’ – there’s that connection, and I just think that you get a lot further too because you’re able to communicate that much quicker and you’re able to experiment with ideas a lot quicker. It seems to be a healthier situation to be in the same room with people.”

LaBrie points out that his working relationship with Matt Guillory became much stronger with that proximity since they were able to let their ideas evolve. “I had time to internalize them – sit with them a while and then digest them and go further with the idea and keep progressing that way and really developing the ideas to a point where we say, ‘well this is it, that idea is complete.’ That was a really advantageous situation with this making of the album and I think reflect that. I think the songs are much more mature, there’s more focus, more direction, more of an immediate infectious groove to it…”

In addition to that maturity in the writing, there is also a level of comfort between the musicians knowing each of their bandmate’s styles and how they approached their instruments. “The players feel more comfortable because we knew where each guy was coming from, and what each person more or less expected from one another…”

LaBrie recalls that being in producer’s chair, as well as being in the writer’s chair and in the singer’s chair gave him the control he needed to stick to his vision, though he still attempted to be extremely open minded to everyone’s ideas.

He says, “It was great hearing how everyone in the studio was really able to gel that much better on this album and I really worked on it when it came to the mixing stages to sonically really enhance it and to make it sound, I think, a hundred times better than the first album…
I’m getting great feedback from it, it is doing really well and I’m really happy…that’s when it all comes around and you feel that you’ve really accomplished something, is when you actually start getting the feedback from the people. That’s what it’s all about.”

LaBrie is well aware that a great album and a familiar name is not enough to get a band heard. Knowing the radio environment, he realizes that what gets played is not a true representation of what is out there and these days the industry faces going up against large corporations, who now own the stations. So, while Magna Carta is putting a good push behind the release and planning to follow-up with a re-release in the new year, it may not be enough, and that is a reality that LaBrie finds very frustrating.

“When I listen to these songs and I hear it from so many people they think there’s songs on here that are incredibly acceptable for radio play and people being able to latch onto them and really groove with them. And that was something with both albums, I said you know ‘ I want us always thinking of songs that groove that are extremely rhythmic’, because that’s what pulls people in and you can still make the music intense, you can still make it intelligent, you can still be brilliant, but first and foremost, the two most important elements are the groove and the rhythm.”

Upon completion of the Mullmuzzler album, LaBrie says it was time to jump into the studio again for Dream Theater’s upcoming double album, which is due out in January 2002. Obviously touring with Mullmuzzler didn’t fit into his schedule this fall, but once he returns from the twelve to fourteen month tour that Dream Theater has planned for the new year, he hopes to pull off a short run of Mullmuzzler dates in the states, possibly ten shows random performances.