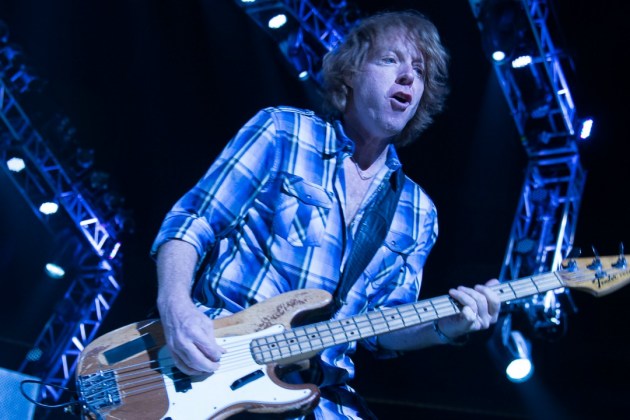 With the driving strengths behind Dokken lying in their vocal harmonies, arena-style guitar explosions, and adrenalized live performances, for many fans it was a great disappointment to see the band waver from their trademark sound. But, after wiping the slate clean and releasing what most are calling their best album to date, the audience is certainly listening.

And after what bassist Jeff Pilson calls “a little bit of trial and error,” the band has perfected their live performances for the forum that they are drawn to. “For Dokken its great to play places this size. This is where our music does the best and this is what we feel we’re cut out for, and when we play these places, it’s pretty clear we are, he emphasizes. “I’m so excited to be playing venues like this,” says Pilson.

And after going years with their trademark three-part harmonies, Reb Beach (guitar), who has been with the band since 1998 is now also singing background vocals, allowing them to take their vocal sound to the max while taking some of the strain off of lead vocalist, Don Dokken. “We can’t get anymore guys than four in a four piece band singing,” Pilson jokes.

Adding even more fuel to the fire behind Dokken is the fact that they now have a fourth member running in the same direction as the rest of the band.

“What people need to understand is, one of the reasons why George is not in the band is – its not really just about the not getting along thing – cause we never got along, I mean actually he and I did, I take that back, but there was always lots of problems in the band with the getting along factor from day one, the difference was in the musical directions. At least in the eighties we were all in the same direction, and we all wanted to make great records, how to make them, we all had different opinions, but he’s not into that music anymore and you don’t want to force somebody.”

Thus, the band has been much better off with the addition of Beach, who Pilson calls “a great writer and a great player, and somebody who just really needed the forum to show how good he really is.”

He explains, “Winger was a great band and I’m a huge fan of Winger but it wasn’t geared for that kind of guitar playing. And that’s something he’s capable of and now he’s got the chance to do it. And the fact that he can do that and be a great team player and be a great writer enhances the vision for what Dokken’s wanted to be, he’s just really filled in beautifully where we were going but now we’re going there in an even more clear direction. So he was the absolute right choice.”

In the event that Beach should want to participate in a Winger reunion, Pilson says, “I would hope that he wouldn’t have to leave the band to do it,” but “if he did leave the band though and if that were the case, sure we’d go on,” and as for who they’d get to replace him, Pilson says “don’t even want to go there, its too far away.”

Pilson explains, “For one thing, I know Kip as well, and we talk all the time and Reb and he talk weekly. It really looks like its well over a year off. They just feel like its not the right time at this point. I’d like to see us do another studio record and another run, and then if he wants to do that, that might be a good time for a break anyways. ”

In fact, plans for their next release are already underway. At this point, they’ve each done some individual writing towards it and are going to try to do some writing on the road, but Pilson says that the next phase after this tour is over is to definitely complete their next Dokken studio album.

Before getting sidetracked with his role in the upcoming Metal God movie, Pilson had been working on a solo project.

“The original idea was that Don and Reb and I were all going to do solo records for Japan, that’s where that all started and so we all had deals with the same people and it was kind of an interim thing before the next Dokken record,” he explains. “I’ve recorded a bunch of songs for the record that I wanted to put out in Japan, but now I’ve kinda changed the direction of where I want to go.”

Pilson says that he is hoping to put the album out in the Spring near the release of the Metal God movie. In the meantime, he and his Webmaster are trying to find a way to put out the other material that was originally written for the Japanese record and has since been excluded.

Before Dokken’s next studio album we can also expect to see the DVD/VHS video for their Live From the Sun performance, which is due out before the holidays. It includes four additional acoustic songs, some extra interview footage, and some fun stuff that won’t be found on the already released CD version.