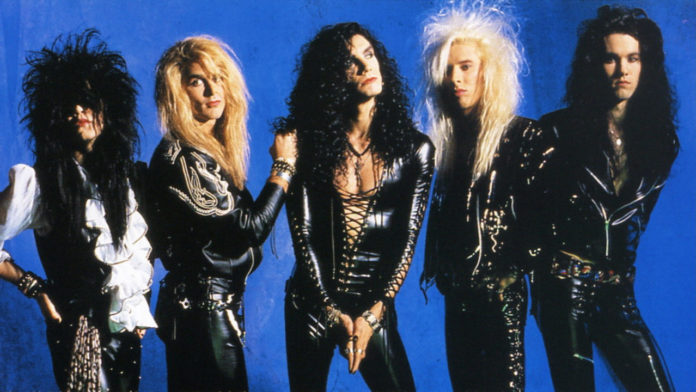 Based in Tampa, Florida, Kevin Steele says that when the band took the typical route when trying to get a record deal back in the late eighties, and after releasing demo tapes, shopping them, and playing showcases in Florida as well as New York, Virgin Records came to Tampa and signed Roxx Gang as the first hard rock act for the pop label. “We just did the usual routine, did what everybody told us to do (laughs),” he explained.

Though, one form or another Roxx Gang had been together for a few years at the time, the line-up that was on the first album had only been together about a year and a half.

And those who had become known as the “original members” disbanded while their recording career was on hiatus, due to the exit of all of the recording company representatives that had brought them to CBS (Epic) for what was slated to be their sophomore release.

“That’s when grunge hit, and all the sudden it was like murder for us, and we eventually got this little independent deal and released it, but that’s how long it took us. That whole time there was a band that was performing and writing material and recording, but we had no outlet as far as a label,” said Steele.

Steele says that the line-up that was on their first album probably stayed together shorter than any other line-up he has ever had, but just because they got the biggest spotlight, everybody thinks of them as original members, though, drummer Tommy Weder and guitarist Stacey Blades have been with him ever since their second album, The Voodoo You Love, which was finally released on Perris Records in 1995.

He went on to say that Tom Mathers, the president of Perris records has done what he can to promote the band with limited resources and while their aren’t getting national exposure anymore, they have been able to keep going and maintain a following of loyal fans.

With the current line-up, Steele has released the latest Roxx Gang album Drinkin’ T.N.T. and Smokin’ Dynamite on Perris Records, however, he says they have not stopped looking for a major label deal. Since their strength lies in their live performances the band continues to play showcases, but their biggest problem has always been that nobody is quite sure how to market the band. And it has been that same story that they’ve heard since the beginning.

“We were Virgin’s first hard rock band ever. When we got on Virgin, their acts were like Paula Abdul and stuff, they were a total dance oriented label…Virgin didn’t have a clue how to push a f#cking hard rock album, and the album died and we were p!ssed, and they were gonna put us on Charisma, which is a subsidiary label of their, and we said f#ck this, we didn’t get the right push on their main label, they’re gonna put us on this side label, its going to be nothing – our lawyer was saying ‘get out’,” Steele explained.

When describing the band’s sound, Steele sites many diverse influences that include glam bands like Iggy Pop, T-Rex, and the New York Dolls; southern rockers like the Allman Brothers and Lynyrd Skynyrd; pop artists like the Beatles and Elvis; and rhythm & blues legends like Muddy Waters and John Lee Hooker, but says that he doesn’t like to be pigeon holed into a particular label or genre.

“I think our band — like a band like the Black Crows too really – I feel like that is one of the only bands that is out there playing what I consider to be like a current band that is playing classic rock. I see a lot of similarities between us and them, except I think we’re like the Black Crows on acid (laughs),” he suggests.

Steele believes that rock n roll should be about having fun, and says “If you have any aspirations higher than that, you shouldn’t be playing rock n roll, you should be a classical musician or something. If you are trying to be a virtuoso, rock n roll is not the right medium.” However, Steele notes that he has always had quality musicians in his band, despite the fact that other bands of the same era have insinuated that their only strength was their “glam” look.

“In the eighties, all the metal bands used to say to me ‘oh, Roxx Gang is all image’ right. That’s another thing ‘Glam Rockers, they’re all show and no go.’ Well first of all, bull sh!t, I’ve always had good musicians in my band. And second of all, I feel so sorry for anybody who can’t appreciate the image side of rock n roll – that’s half of it! Half of rock n roll is like haircut and cool shoes, you know what I mean? That’s the way it’s been, why do you think Elvis was so huge? If he would have looked like Buddy Holly, he wouldn’t have been as big as Elvis Presley,” Steele exclaimed.

And while he admits that the glam look and comparison to platinum artists like Motley Crue and Poison had initially helped the career of Roxx Gang, Steele says that with everyone attempting to become glam rockers, the scene ruined it for band’s like Roxx Gang, Hanoi Rocks, and Faster Pussycat who could really carry the look.

“To me there was no soul and they looked ridiculous, and so we suffered from the backlash, when the eighties backlash came and the hair bands and the eighties bands, we suffered right along side all these bands that I didn’t associate myself with and hated in the first place.”

Today, Roxx Gang still holds true to their glam image, and showcases their appearance in videos, which their have been releasing for years, even when they were without a record label. Steele says that their most recent, “Star Trip” can be seen on the Much Music video station in Canada, which he describes being similar to MTV, except with more rock n roll, especially now that MTV doesn’t play rock n roll any more. Since their other guitar player Jeff Vitolo works a lot of times as a DJ in strip bars, they decided to film the whole star trip video in strip bars, and Steele says it has a lot of cool effects and that there is something for everybody in it.

“I mean guys are definitely going to dig it but even girls will like it I think,” he jokes.

And while on the subject of women, Steele advises, “If anybody tells you, if any guy ever tells you that girls wasn’t one of the reasons he got into rock n roll, he is a f#cking bold-faced liar. Because when your young, that’s one of the main inspirations…” “When I saw the monkeys on TV, I can remember being a little, little kid and seeing this one particular episode where all these girls where chasing Davy Jones around the Eiffel Tower and they’d catch up with him and rip his shirt off and stuff.

And I was like right then, before I knew I had a bit of musical talent, that was like years before I had a clue how to write a song or anything, I was like ‘that’s what I wanna do man, I wanna get chased and have my shirt ripped off, ride around in a monkey mobile, and live in a clubhouse with my friends. This is the life for me.’

“Though he says since then, “Really, not a whole lot’s changed…,” he adds that he is also driven by the music and much like the blues legends who have influenced him, Steele plans to keep on playing till he can’t play anymore or until he dies…