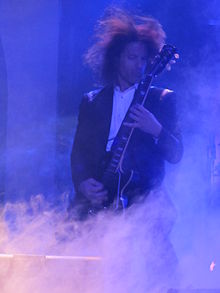 After almost two years of playing with Megadeth, guitarist Al Pitrelli seems to have found a new home, considering himself a full-time and fully dedicated member of Megadeth. But when asked if he’s going to be a permanent fixture, he still jokingly says, “that’s a question you should ask Dave (Mustaine).” Thus far, Pitrelli says that his time with the band gets “better and better everyday, and it’s been a learning process to say the least. It’s absolutely great.”

“We’re trying to get back to what the band was best as, and I think The World Needs a Hero is a journey back towards that. I don’t think we’ve hit it yet cause with all the changes that had happened prior to making this record, I think the band is much more focused right now. It’s on fire right now, so it’s a lot of fun. It’s really exciting.”

As for the changes beyond the band line-up, Pitrelli says that while he was not with the band long before they transition from Capitol Records to Sanctuary, he has been a fan of the band long enough to see how their career had evolved.

“Obviously, I didn’t know all of the little subtleties in the relationship watching from the wings what had been going on, but I’d crossed paths with the band over the years, you know, being with Savatage or whomever – with Alice Cooper,” he explained.

While he says that Capitol had done “a great job with a band they probably didn’t know what to do with,” though, from the band’s perspective, the timing seemed right for a change, and with Sanctuary being strictly a heavy metal label, they found themselves a outlet where they can fulfill their vision to refocus.

While some may of thought that the mix of Megadeth and Motley Crue on the Maximum Rock Tour last summer was a bit of a stretch, Pitrelli jokingly points out that while they may have p!ssed off some fans, they also gained a few in the process.

“That was easy compared to some of the festivals we had just throughout Europe and the Pacific Rim. We were on a festival, I think it was Finland, where three nights of the show, three different bands were headlining, Megadeth was headlining one night, there was a Euro-Techno band headlining the second night, and Ray Charles was headlining the third night.”

While many countries have accepted Megadeth, the band has also encountered resistance abroad, especially in Malaysia where the government banned the band based on accusations of Satanism.

Pitrelli says “I guess that their government wanted to save their young from the evils of rock (laughs). I don’t know, they saw the album cover and they figured we were a bunch of Satanists and they were going to make an example out of us.

They banned us from coming to play their, they said we’d be arrested, Dave (Mustaine) in particular I think was labeled public enemy #1, which was kind of a bummer for the kids over there. I don’t mean to use the term kids – fans – kind of missed out on a great show, and at the same time we just got a ton of press out of it. It’s kind of nice being bad boys again.”

And that wasn’t the only trouble the band encountered. Pitrelli also explained that while tearing things up overseas there have been several roadblocks “Well let’s see, we got banned from Malaysia, their was a government overthrow in Indonesia, we went through an earthquake in Tokyo, a typhoon in China…” But, he is still anxious to continue and head to the states for a few more months of touring.

“The band is on fire right now…and you want to kind of come home and kind of show off to your family and friends. At least we won’t have to deal with currency changes and border crossings, and there are not too many time zone changes, you know. So it should be a blast. I can’t wait.”

To make things even more of a blast, the band has chosen to pack fans into large clubs and theaters instead of playing the larger venues, so the shows will sell fast, and as Pitrelli points out, “clubs are cool because it get’s up close, personal, and real hot and sweaty.” And they’re playing two solid hours every night.

“I think it’s great, it reminds me of when I was playing with Cooper back in ’89, when we were touring with the Trash album, and ‘Poison’ was a huge hit, instead of doing the arenas they said, ‘let’s just put him into 2,000 seat rooms and make it like the event of the year’, which is kind of like what we’re doing now….It’s going to be packed. It’s going to be insane.”

“I had joined the band late into the Risk tour, and the way the band works, soundcheck is where a lot of the writing goes on. So, most of the writing for this record occurred before my involvement, before joining, and then when I did get in there, Dave saw that I could bring certain things to the table.”

But prior to making contributions to the band’s sound, he admits that there was a learning process and now that he and Mustaine have had the opportunity to work together on the road. He says that they are becoming the best of friends and bandmates, and will collaborate on songwriting for their next when it works for the band.

“He sees what I can bring to the table and he’ll use what he things will work in Megadeth. There’s not going to be any gratuitous writing on this record just so I can have my name on it, ‘cause I don’t want to write anything that’s not going to make the song better, I don’t care.”

While it is a band and a Democracy, at the end of the day, everyone knows that Dave Mustaine is the boss of Megadeth. As Pitrelli points out, he has been steering the ship for more than two decades and lead the band to multi-platinum success.

Pitrelli says, “I’ve never worked with a more intense individual in my life. I’ve always been able to get up and play something and say ‘hey that was pretty good’ and everybody goes ‘yeah, that was pretty good’… Dave will look at me and go, ‘Well, It didn’t suck that much, why don’t you work a little harder’…I was pretty lazy I could sit back on my abilities and get plugged into any situation and do it…He pushes me, I’ve probably become a better player and a better person, and developed a better work ethic since then.”

Being a fan of the old school guitarists, who have played with their Les Paul’s low-strung, Pitrelli’s artillery naturally includes a bunch of Les Paul’s, though he has also picked up a Strat and a couple Explorers for the road.

“I’ve always been a Les Paul player over the years, yet you know you have to play different instruments to conform to whatever you’re playing, different styles of music. But, ever since I was a kid there was nothing cooler than a Les Paul.”

No Room on the Side

Having made his living based on his schooled capabilities, Pitrelli has jumped from ship to ship over the years performing with the likes of Alice Cooper, Widowmaker, Savatage and others, in fact, he says two of the musicians that he admires most are Jon Oliva (Savatage) and Dee Snider (Twisted Sister, Widowmaker).

“Dee was a real big influence on me musically and personally, because he’s got the same kind of dedication to his art that Dave Mustaine has, just the passion and dedication – work ethic, just this striving for perfection and it’s contagious. And we spent a lot of hours together…And Jon Oliva is probably one of the most talented people I’ve ever, ever met and he knows nothing technically about what he’s doing. He has no education musically whatsoever, yet he can sit down at the piano and write a brilliant piece of music.”

But, now that he has found a band to call his own, there is no time for side projects like his collaboration with Tommy Farese or his participation in the Trans-Siberian Orchestra Christmas tours. Between press and promotions, touring, and writing, he says, Megadeth is a full-time thing.

Pitrelli explains, “Being in Megadeth is nonstop work, and I also don’t want to confuse anybody as to the depth of my involvement with the band. Megadeth isn’t a session or just a gig for me, it’s my band now, and these guys make a point of doing Megadeth and that’s it, which is kind of cool, because I’ve never been able to do anything like that.”