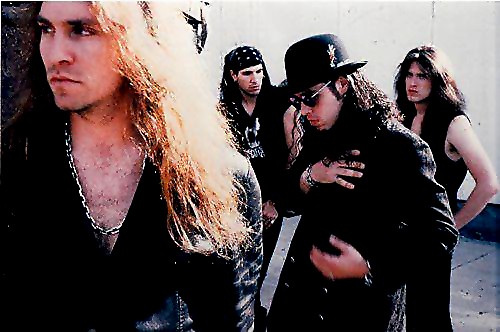 After riding two days on a bus from Ft. Lauderdale, Florida to Buffalo, New York, three quarters of the original Saigon Kick, Tom Defile, Matt Kramer, and Phil Varone, reunited to play for fun again. For their reunion shows, Jeff Blando has joined the trio to handle the guitar duties in place of their original guitarist/vocalist Jason Bieler.

Bieler says that for him, Saigon Kick is over. He has a new band called Super TransAtlantic and he has no intention of returning to the band at this time. Bieler said, “I wish them well, but I have no participation with them at all.”

Many of you may recognize Bieler’s replacement from Slaughter. Blando joined Slaughter after guitarist Tim Kelly’s tragic death, toured with them on the Rock Never Stops tours as well as many headlining gigs, and played on their latest CMC release, Back to Reality.

Since they started playing together more than a decade ago, the band had gone through many changes. Shortly after their single “Love is on the Way” hit the charts, vocalist Matt Kramer left the band to pursue a solo career. He later did a few albums with a band called Coma in Los Angeles, California, and eventually hooked up with former bandmate Phil Varone last year in a band called Soul Star, that was playing the local scene in Florida.

Tom Defile also left Saigon Kick early in their career. He played in a band called Left For Dead, along with Jeff Blando (now of Slaughter/Saigon Kick), drummer Bobby Borg (Warrant), and vocalist Eddie Gowen (Queen Ann’s Revenge). The band did an independent record and then toured with Warrant and other bands.

According to drummer Phil Varone, the two left back then because of the direction the band was going. “We were growing as people, as artists, and we just didn’t see eye to eye. I mean that is basically what it boiled down to. Matt and Jason were really coming to a wall when it came to writing. It just wasn’t working creatively.”

Though Varone stayed in the band to play on both their Water and Devil in the Details albums, he explained that the tension between him and Bieler had grown after their 1995 Devil in the Details tour. They decided that their “love/hate” relationship could permit them to be friends, but they couldn’t work together any more. So, he left to pursue other things, including the Prunella Scales project with Rachel Bolan of Skid Row.

After the VH-1 special, Kramer and Varone, who were already working together again in Soul Star, started talking about the old days, and decided to put the band together again to have some fun now without any pressure.

“Obviously, we are doing the first two records (Saigon Kick and The Lizard),” said Varone. “Matt was on the hit record (The Lizard). With Matt singing again we are able to do those two records. Those were are best selling records, and we only thought it would be right to have Tom in the band because Tom was on those first two records,” he explained.

As for recording an album, Varone says that they haven’t thought that far ahead. Though he says they will be writing together again soon. And that Blando has been invited to stay with the band as long as he wants to be a member.

“It would be cool to do another Saigon record with the three of us. The first two records meant a lot to us because it came from where our roots are, it reminded me of the old days when we were twenty one and we worked during the day. We went to our rehearsals and almost got mugged and heard gun shots going on, and how bad we wanted to get out of there and get a record deal.”

“Now we are getting back to the roots and remembering where we came from and we want to make a nice cool, raw, Saigon record,” he continued. Our live set will be heavy, aside from the ballad “Love is on the Way,” “God of 42nd Street” is the lightest song in the set. And since they started out young and have just turned 30, Varone beilves that they still think we have a few years in them.

Though he was never really considered a member of Saigon Kick, Robbie Gennet, a mostly self-taught pianist, performed live with the band through the peak of their success. He played at rehearsals for the Lizard album in early 1992 and every show of the Lizard tour, including their North American theater-tour in the spring of 1993, when they opened for Extreme.

While playing in the shadows on the side of the stage, Gennet says he learned a lot about humility, dignity, and pride. “I was always off stage, sometimes to the point that I didn’t have to even really dress up for the gig, cause no one saw me!”

Since his first professional gig with Saigon Kick, Gennet has toured twice with Seven Mary Three, and he has also been working on some of this own projects, including the Robbie Gennet Band, Rudy, and most recently his solo effort entitled Pianarchy.

Pianarchy is Gennet’s first instrumental album. It is improvised piano music, and there are no other instruments or vocals. The album is on Gennet’s own label, Niggle’s Music, and it can be purchased on his Web site at www.pianarchy.com.

“It’s the first time I feel I have really represented myself on disc as a piano player. I think much differently when I am not singing. My hands have a life of their own, though! It is unlike anything you’ve ever heard, and will last a long time. There is no label for what I do musically, which makes me feel really good about my music and myself.”

Though he left the band after their Lizard tour, and never played on any of their albums, he is still a Saigon Kick fan at heart. “I think it’s great (that Saigon Kick is together again), because I love the music on those first two records. Jason’s harmonies were a huge part of the “sound,” and I can only hope they (Phil, Matt, and Tom) will be able to reproduce them on stage. I have not seen the new tour yet, although I’d love to!”

“STA is everything I have ever wanted in a band. Pat, Ricky, and Pete are awesome musicians and most importantly great people,” said Bieler. He says that the band has been in the works for years, but as far as he is concerned, it was completed when Pat Badger joined he band. In fact, when Badger replaced their original bassist, 2G Large, who had quit, they even re-recorded several songs from their debut album so that Badger could play and sing on it.

Badger says he is happier now than when he was in Extreme. “This band is such a breath of fresh air to me. It has been great stepping into this situation. Everyone has input and mutual respect for everybody else in the band.” Though, he hasn’t cut all ties. Paul Geary, who was Extreme’s original drummer, is now their manager.

Badger said that after spending most of his time on the road from 1989 through 1995, he took some time off “to get grounded again.” He said “Being on the road can be fun, but it’s not everything…” “I was pretty burned out. After a few years away from music, I started feeling like I really missed it and then this whole situation came about.”

Badger’s opportunity came last spring when one of his old roadies told him about Bieler’s new band. “He sent me some music and in my own mind, I joined before I even went down and jammed with them,” said Badger.

According to Badger, this band is not really like Saigon Kick or Extreme. He said, “there are certain elements that you may hear because it is us playing and singing, but I haven’t played it for anyone that said it obviously sounds like our old bands.”

As for Extreme, they officially broke up in 1995, when they were working on a new record and guitarist Nuno Bettencourt quit the band to do a solo record. Badger said, “Pretty soon after that, Gary (Cherone) got the call to go out and write with Van Halen and that really put the period on Extreme.”

Now that Gary is out of Van Halen, he still doesn’t see a reunion happening anytime soon. “Everyone seems pretty content doing their own thing now.” Right now, Cherone is acting in and co-executive producing a movie called the Habit, and working with his former bandmate, Bettencourt on a song for the movie. Bettencourt has a solo career, their second drummer Mike Mangini has been playing with Steve Vai’s band since the breakup, and Badger says he is content with STA.

STA’s first single Super Down was featured in the Universal movie American Pie. It can be found on the album’s soundtrack, and their debut album Shuttlecock will be released on April 25th on Universal Records. We can also expect to see them touring in late March or early April.