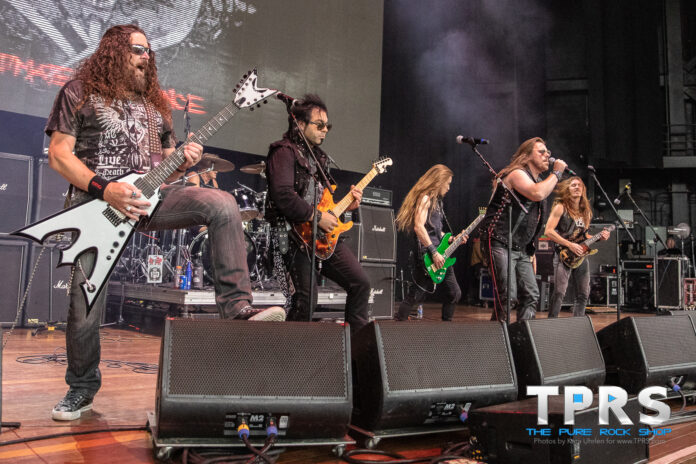 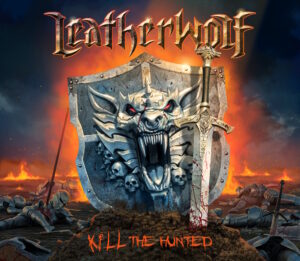 Orange County CA metal band LEATHERWOLF have released a lyric video for the song “Hit the Dirt” off their forthcoming new studio album, ‘Kill The Hunted’, due out this fall.

The video can be viewed at this location: https://youtu.be/LhsNAMJFN-Q and features photos from our editor Kara taken during their recent performance at the M3 Rock Festival in Maryland.

The current LEATHERWOLF live line-up which had its baptism of fire at this year’s M3 Festival also features Wayne Findlay (MSG, Dream Child,Slavior) on guitar and keyboards and bassist Brice Snyder (ex-Railgun), on loan from thrashers Art of Shock.

“I feel like “Hit The Dirt” is a great track to re-introduce LEATHERWOLF to the metal public with a vengeance.  I mean, we’ve been out there and played live until Covid shut everything down but’s it’s been a while since we’ve had a new album”, says Roberts. “”Hit The Dirt”pulls no punches and the trademark LEATHERWOLF elements are there: The combination of great riffage, twin guitar lines, ripping leads,strong vocals, and a chorus that’ll stick in your head – it’s all in there. We wanted to make a heavy album without sacrificing melody and variety and I think we’ve achieved that.”
Produced by Roberts who’s been the band’s primary driving force for many years, ‘Kill The Hunted’ took the better part of 3 years to complete from the initial writing and demo sessions in 2019 before things came full circle in early 2022 when legendary producer/engineer,Randy Burns (Megadeth, Kreator, Helstar), entered the picture some 40 years after first working with the group.
“Re-connecting with Randy was pure coincidence and a classic case of “everything happens for a reason”, laughs Roberts. “We had been talking to a couple of other mixers, including Jacob Hansen over in Denmark who had done ‘World Asylum’ for us, when our manager found out that Randy was back in business. We love the original Tropical EP so we thought, “what the hell – let’s get in touch with him and see what he can do with this stuff if he’s available.” It only took a couple of test mixes to know that he was exactly what we were looking for. Randy had it dialed real fast and was super easy to work with. We couldn’t be more pleased with the end result. And then we handed it off to Tom Baker who been our mastering guy for years for the final polish. I think the fans will be as stoked as we are once they hear the album.”
In related news, the band has announced that they have been forced to pull out of their two European shows, Headbangers Open Air near Hamburg, Germany and and Rampa Kultura in Goleniów, Poland, at the end of July due to drummer Dean Roberts sustaining a severe wrist injury which will see him out of commission for several weeks.
“We were briefly contemplating doing the shows with a fill-in drummer so we wouldn’t have to cancel, let people down, and lose money due to flight cancellations. Unfortunately, it just was not feasible for various reasons. Number one being that we simply would not have had enough time to properly rehearse a full set of 60-plus minutes of music and be confident enough to represent LEATHERWOLF at the sort of level we expect from ourselves and our fans rightfully expect from us. Our sincere apologies to everyone who was looking forward to seeing us but especially the organizers, Thomas and the HOA crew and Pawel and the Rock Hard Ride Free people, for putting them in a bind. So sorry, guys! We’ll see you in 2023!”
More LEATHERWOLF can be found here:
https://www.leatherwolfmetal.com
https://www.facebook.com/leatherwolfmetal
https://twitter.com/tripleaxeattack
https://www.instagram.com/tripleaxeattack

Follow us @ThePureRockShop on Facebook and Instagram for more local show and festival coverage including the upcoming Masquerade in Philadelphia this July and Monsters on the Mountain in Tennessee this August.