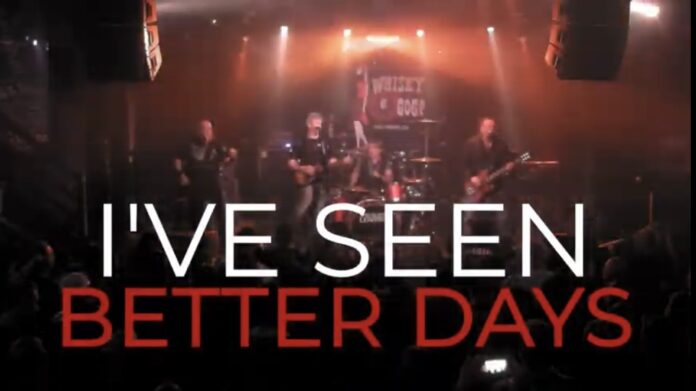 A record company executive once told Queen that their song Bohemian Rapsody was too long to be their next single, clocking in at 5:54. Most hits hover around three minutes, but most bands aren’t Queen, and we all know how that worked out.

Better Days, the new music video from the Apocalyptic Lovers, dropped on Tuesday, October 20th. Because we are not Queen, and the song is over five minutes long, we never released it as a single. But, Better Days is personally my favorite track from Redemption Volume I, and when I first heard producer Michael Wagener’s final mix, the hair on my arms stood on edge. Our lead guitarist, Sean MaGee, wrote the entire song a long time ago, and it is crazy how relevant it still is today.

Since COVID hit, the recording of our new album was bumped to 2021. With not much else in the works, I was already chatting with my wife about doing a video for Better Days. Then in March and April, texts and emails came flooding in from our fans. They were thinking just like we were – that with all that is going on in the world, this song is as meaningful as ever. They want to see a video for this song, and we are excited to finally announce its release.

We wanted to do something really different for Better Days to help raise awareness and funds about the state of the entertainment industry. It was the first to shut down, and it will likely be the last to make a full comeback. So many musicians, their crews, and behind-the-scenes people are out of work. And while we are an indie band too, with limited reach, we hope our efforts will snowball into fundraising and inspiring other musicians to do something similar with their music and videos.

The inspiration behind Better Days was Van Halen’s 1992 video for their big hit, Right Now. The imagery from that video has stuck with me after all these years. We took the idea and went a few steps further in hopes of bringing awareness to the industry workers who need help right now. We chose to highlight a legit charity, MusiCares,that was set up by the Grammys to help those out of work in the music business. We also tried to bring awareness to the many independent venues in danger of closing by mentioning the #SaveOurStages campaign. And because we are tired of the bad news that seems to constantly surround us these days, we tried to lighten the mood with a little humor and a few nods to our inspiration, Van Halen. Shockingly and sadly, the music world lost Eddie Van Halen on October 6th. As we were finalizing edits, we made sure to include a proper acknowledgement to Eddie and Van Halen in there as well. I mean, if it were not for Eddie, our guitarist and many around the world would not play like they do today.

Besides raising awareness for this serious subject matter, we plan on putting our money where our mouths are. We are donating all streaming revenue from the song and video to MusiCares from now until 12/31/2021. We all have full time jobs and families, so putting this video out and donating whatever we can from it is the least we can do. We are just one indie band, but if others could do the same and it spills over to major label acts, it could really add up. So, basically, views of our video will put funds into a charity that helps music industry workers and their families put food on the table, keep a roof over their heads, and pay medical bills. Like I said before, the industry was the first to close and will be the last to reopen. My wife used to work for one of the largest production companies in the Southwest, so we have witnessed first hand how bad this situation really is with many of our friends losing their livelihood.