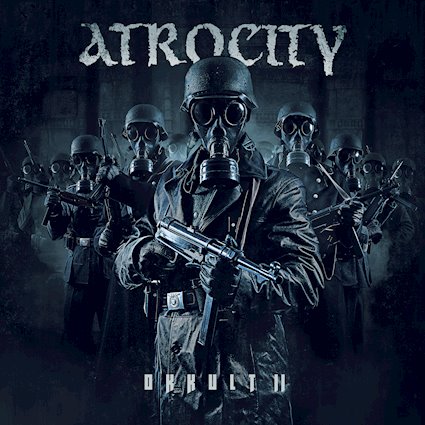 ATROCITY is back! The new album, “OKKULT II” is a dark, brutal and bombastic masterpiece! This killer album will be released on July 6th, 2018 – and it is packed with vicious death metal gems!

Fans of heavier ATROCITY albums, like “OKKULT” or their death metal classics like “Hallucinations”, “Todessehnsucht”, “Blut” and “Atlantis” will get all they hope for and more! “OKKULT II” once again showcases the tremendous spectrum of what ATROCITY are capable of; delivering a crisp, powerful and atmospheric production, with expansive horror movie choirs and brutal metal songs, that will dig deep under your skin!

Boasting a huge production – courtesy of producer and ATROCITY main man Alex Krull (Mastersound Studio) – Krull has made sure that the songs are as unrelentingly heavy as possible, while ensuring that the atmosphere and energy of the songs draw the listener immediately into the occult lyrical concept, dealing  with occult magic, strange places and events, conspiracy theories and still unsolved mysteries.

The band once again recruited the award-winning Canadian sound designer Katie Halliday (who has worked on movies such as “SAW V”, “SAW VI” or “SAW 3D (VII)”) whose chilling approach to the album made sure that the atmosphere of the record took the music to even darker corners!

The addition of two death metal icons, LG Petrov (Entombed A.D.) and Marc Grewe (ex-Morgoth), has given ATROCITY fans another layer of excitement as they wait to hear what the vocal legends bring to the already devasting ATROCITY sound!

ATROCITY have a proven track record in writing death metal classics, and new cuts like “Shadowtaker”, the death metal masterpiece “Spell Of Blood” are brutal anthems while “Masters Of Darkness”, “Bloodshed And Triumph” or “Infernal Sabbath” are pitch-black extreme metal hymns, to warm even the blackest of hearts!

“OKKULT II” is THE death metal album of the year!

ATROCITY, one of the most successful metal bands from Germany, was formed in 1985 and is known as one of the most experimental and varied bands in the history of metal and as the pioneers of German death metal! They are not shy when it comes to venturing into uncharted terrain, while always delivering top-class productions. A good example is their album “Werk 80 II”, which entered the German Media Control Charts on #19.

ATROCITY already played on 5 continents, over 50 countries and played hundreds of gigs.
“OKKULT” (2013) marked the beginning of a very special album trilogy, that the metal scene has not seen until then! Following their “OKKULT” world tour, ATROCITY once again signed with Massacre Records und released the “Masters of Darkness” (EP) in December 2017 as a harbinger of the death metal flagship’s upcoming album “OKKULT II”, which will hit the stores with full force on July 6th, 2018.