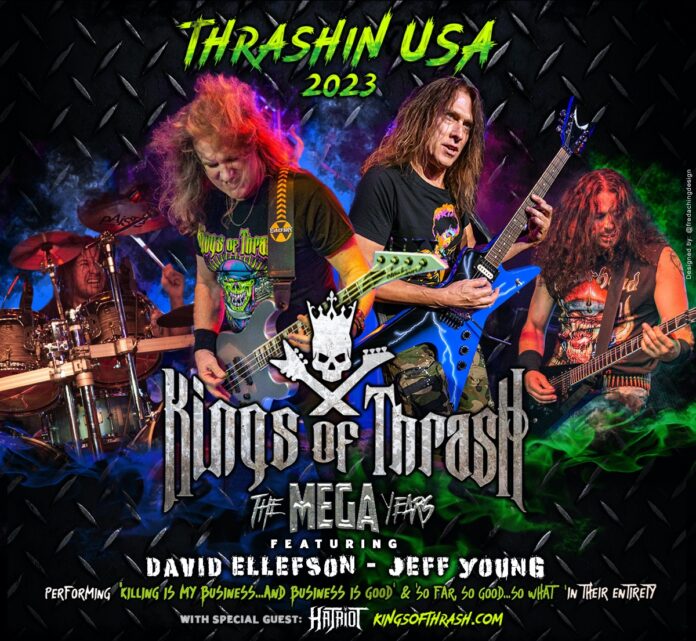 Following their four warm-up dates in October, KINGS OF THRASH, featuring David Ellefson and Jeff Young, today announce the first leg of a planned 2023 world tour commencing February 16 in Joliet, Illinois. The THRASHIN’ USA tour will cross the Midwest, East Coast, and southeastern part of the USA through March 15. As with the band’s 2022 warm-up shows, the group will be performing the Killing Is My Business…and Business Is Good and So Far, So Good…So What albums in their entirety. KINGS OF THRASH also feature Chaz Leon on vocals and guitar and Fred Aching on drums.

The band has also signed a worldwide deal with Cleopatra Records and will be releasing a live CD/DVD package called Best of the West…Live at the Whisky A Go Go on March 24. The 17-song set was recorded and filmed live at the legendary Whisky A Go Go in West Hollywood, CA on October 15, 2022 and also features performances with Chris Poland. The DVD was directed by Michael Sarna for Inmotion Entertainment.

The pre-order can be found at Best of the West…Live at The Whisky A Go Go.

Dates for the tour are below.

KINGS OF THRASH ON TOUR:

Follow us @ThePureRockShop for more local concerts and festival coverage in 2023 including the RokIsland in Key West, Monsters of Rock Cruise, M3 Rock Festival and more.