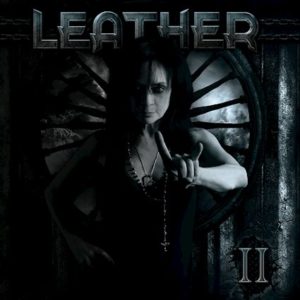 LEATHER, the solo band of CHASTAIN singer Leather Leone, will release its new album, “II”, on April 13 in the U.S., through Dive-bomb Records, and in Europe through High Roller Records.

In 2013 “Surrender To No One” marked the return of original vocalist Leather Leone. Long considered one of the originators of the female power metal vocal style. In 2016 Leather resurfaced with a new band from Brazil. The band includes Vinnie Tex and Daemon Ross on guitars. Thiago Velasquez on bass and Braulio Drumond on drums. After successful tours in South America and Europe, Leather and the band realized their combined inspiration and they wrote and recorded new material. Leather quotes “I’m extremely excited to be back in game we look forward to our new journey together.”

In 1984, she was connected to metal guitar virtuoso David T. Chastain, who was known at the time for his band CJSS, featuring bassist Mike Skimmerhorn. She joined his new band, CHASTAIN, as the Lead Vocalist. The first lineup, which was featured on the album Mystery Of
Illusion (1985), had Skimmerhorn on Bass and Fred Coury as Drummer, who would go on to Cinderella shortly after this. She recorded 5 albums with Chastain, Mystery Of Illusion (1985),Ruler Of The Wasteland(1986), The 7th Of Never (1987), Voice Of The Cult (1988), and For
Those Who Dare (1990) with other members of Chastain who went on to bands including: Ken Mary with House of Lords, Fifth Angel, Alice Cooper and Accept; John Luke Herbert and David Harbour with King Diamond; Pat O’Brien with Cannibal Corpse.
After Chastain’s: For Those Who Dare tour finished in 1991, the world waited for more. Then Leather disappeared. For years fans searched and wondered what had happened to the “Voice of the Cult”, the only female vocalist ever to be compared to Rob Halford from Judas Priest,
Bruce Dickenson from Iron Maiden and Geoff Tate.