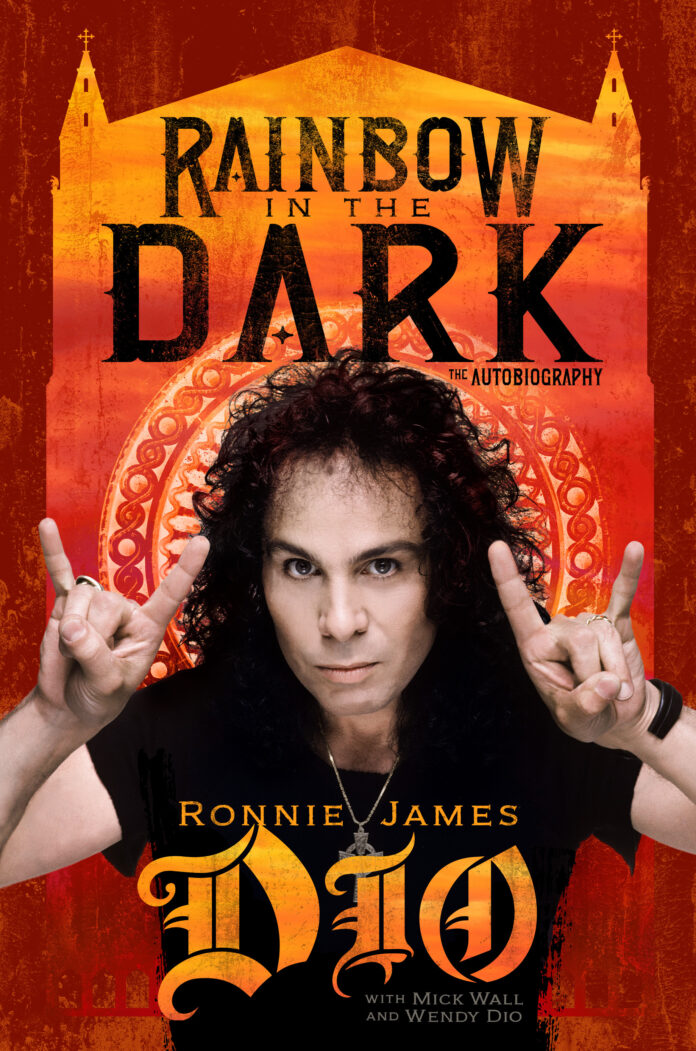 The long-awaited autobiography from heavy metal music icon Ronnie James Dio, the powerhouse voice of Elf, Ritchie Blackmore’s Rainbow, Black Sabbath and his long-time bespoke band DIO, will be published on July 27 by Permuted Press in the U.S. and Canada and Constable in the U.K. Co-written with British music journalist Mick Wall and Dio’s widow and long-time manager Wendy Dio, RAINBOW IN THE DARK: THE AUTOBIOGRAPHY is now available for pre-order.

For actor and musician Jack Black, in whose 2006 film Tenacious D in the Pick of Destiny Ronnie played a pivotal cameo role, Dio was “the Pavarotti of heavy metal.”  When Ronnie James Dio lost his valiant battle with gastric cancer in 2010, Chuck Klosterman, the author of Fargo Rock City, told Rolling Stone. “Anybody who tries to caricature heavy metal singing is really just doing an imitation of what Dio did naturally. His cultural influence is vast.”

Ronnie James Dio had begun writing the manuscript several years before being diagnosed with cancer.  Born in Portsmouth, New Hampshire and raised in an Italian-American family in the upstate New York town of Cortland, his journey to international fame was hardly pre-ordained.  He first began playing trumpet and then guitar and bass in local bands at parties, bars and clubs while still in high school, surviving life-changing setbacks–among them the loss of his bandmate and best friend in a car accident that put his own life in jeopardy.  These events only made him more focused and determined to succeed.  He documents how he evolved from sideman into singer and frontman to not one, but three, internationally-renowned multi-Platinum-selling bands, playing on the world’s most hallowed stages, among them London’s Hammersmith Odeon, Tokyo’s Budokan, The Forum in his ultimate hometown of Los Angeles, and the arena that represented, for him, the pinnacle of success—New York’s Madison Square Garden, where this book begins and ends.

Ronnie James Dio weaves his tale of tenacity, tragedy and triumph in a chatty conversational style, easily moving through the sudden transition that put him front and center behind a microphone; the luck that led to the formation of Rainbow and a productive but difficult collaboration with guitarist Ritchie Blackmore; the chance meeting with Black Sabbath guitarist Tony Iommi that made him the second singer to front the venerable band, taking them to new levels of international success; his marriage to Wendy, who became his manager and true partner and the huge gamble they took together to launch the most successful endeavor of his career…his own band, DIO.   He explains how the “Devil Horns” (or maloik), something his grandmother taught him would provide protection from the “evil eye,” became his personal calling card and an enduring symbol of heavy metal for fans around the globe.

Ronnie writes candidly about the many excesses of the rock ‘n’ roll life, how his masterful songwriting skills were born of necessity and the number of times he was forced to rethink his career path, always confidently clinging to the dream that propelled him forward.  He talks throughout the book about his love for his loyal fans, for whom his consideration led to countless hours of signing autographs and posing for photos so that no one would be left feeling disappointed.  “He possessed one of the greatest voices in all of heavy metal, and had a heart to match it,” said Twisted Sister guitarist Jay Jay French at the time of Dio’s passing. “He was the nicest, classiest person you would ever want to meet.”

The book is illustrated throughout with photographs, largely never-before-seen, derived from family photo albums and personal archives, plus an eight-page color insert devoted to additional rare photographs from Ronnie’s life and career.

To bring the book to completion, Wendy Dio, whom Ronnie met in 1975, married in 1978 and became his manager following his painful departure from Rainbow, fleshed out certain unfinished sections with additional details and her own observations of specific events covered in the book. Over the past 30 years, Wendy Dio has been involved in many aspects of the music business, receiving awards for stage set design and concert video production, along with serving as executive producer on numerous Gold and Platinum albums. In 2010, she co-founded the Ronnie James Dio Stand Up and Shout Cancer Fund (www.diocancerfund.org) in Ronnie’s memory, which has gone on to raise over $2,000,000 for cancer research, education and early detection screenings.   She worked with esteemed British music journalist and author Mick Wall, who, as a rock music writer for publications such as Classic Rock, Mojo, The Times and a variety of others, had interviewed Ronnie countless times, to finalize the manuscript.

In addition to writing for many of the UK’s major music publications, Wall has produced award-winning television and radio documentaries and has written biographies of musicians and bands, among them When Giants Walked the Earth: A Biography of Led Zeppelin and Two Riders Were Approaching: The Life & Death of Jimi Hendrix.

To celebrate the publication of the book, Wendy Dio will participate in an hour-long LiveSigning.com event produced by Premiere Collectibles on Wednesday, July 28 beginning at 3:00PM (Eastern time).  Those who have pre-ordered the book at https://premierecollectibles.com/dio will have the opportunity to submit questions in advance for Wendy to answer during the event, which will stream live via the Ronnie James Dio Facebook page: (https://www.facebook.com/OfficialRonnieJamesDio).

RAINBOW IN THE DARK: THE AUTOBIOGRAPHY is available at amazon.com http://permuted.to/1642939749 , barnesandnoble.com https://bit.ly/Dio_RainbowInTheDark , or wherever books are sold.

We had the great pleasure of chatting with Ronnie many years ago. Check out the article in our archives.