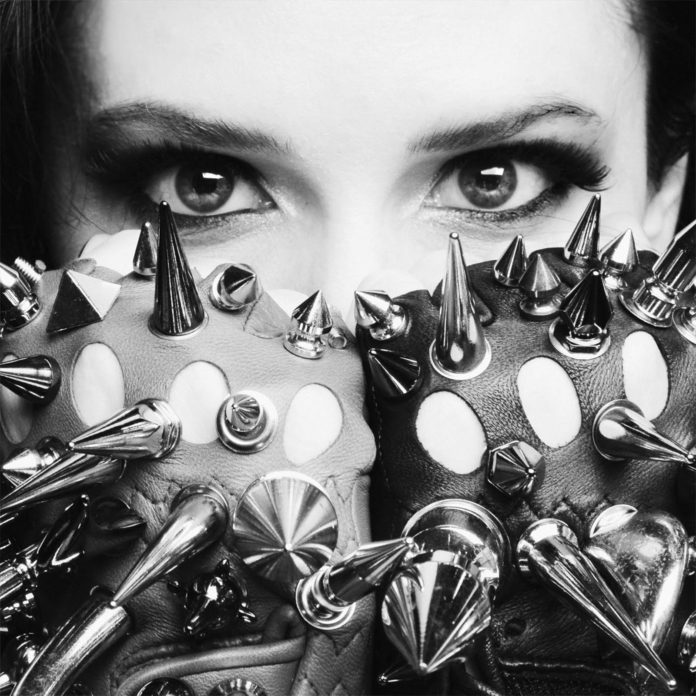 Madame Mayhem is a true rocker with an eclectic style in every aspect of life – merging theatricality with hard-hitting, rocking tunes. And on October 20, 2017, she will be unveiling a brand new album, ‘Ready for Me’ (via Metalville label in the UK and Europe, and HeadBall Records in the US). The just-completed album features a powerhouse team of rock talent, including producer Corey Lowery (Saint Asonia), Clint Lowery (Sevendust), Troy McLawhorn (Evanescence), and both Bevan Davies and Ryan Bennett (Madame Mayhem) on drums.
“All the songs on this album are super personal to me,” explains Mayhem. “About my frustrations, trying to get through the rough times, my anxieties and insecurities, some messed up stuff that has happened to me along the way, relationship devastation, you name it. I noticed it only afterwards that audiences are really getting ‘the dirt’ on me through this album. I was super honest, vulnerable, and didn’t hold back during the writing process of these songs. Corey Lowery and I are a great team because he makes me feel comfortable to spill my guts during writing sessions, and during recordings, to re live these situations I am writing about so whoever is listening gets all of what we wanted to give.
And it turns out the album’s first single/video is the perfect intro to the album – a song titled “All Around the World.”
“All Around The World’ is really about feeling like it’s you against the world, and racing against time. It’s about the pressures to succeed in such a short amount of time, people thinking they know best, and are lost in their own worlds, only concerned about themselves. In this rat race we all live in today, it’s getting harder and harder to break through, even if you work your ass off. The sound is upbeat, kind of a more pop punk ish vibe. Corey Lowery and I thought, though we usually are huge fans of incorporating harmonies in our arrangements, that since this song is really about feeling like it’s just you against the world, so we tried to make it sound like just one melody line, one voice, against all this hard hitting music. The verses are also supposed to make you feel that anxiety and panic that I have on a daily basis, as I’m sure many of us do. But its a super fun song to rock out to when you are just listening to it without over analyzing it.”
Other album standouts include “War You Started” (“Hard hitting high energy – first track off the album to get listeners pumped up definitely one of my favorites!!! Also one of our favorites to kick off our sets with!”) Also, “So Wrong (Lay You To Rest),” “It’s about some really dark messed up stuff I went through and the rage that was building inside me because of it – about laying to rest the stress I was having over the situation. This song is also hard hitting and the vibes from the verse-pre chorus-chorus, even the breakdown and solo take you through the different stages of the feelings one can go through when dealing with traumatic experiences; and the relief you have when you finally tell a loved one or anyone that thing that you tried to bury inside you that you didn’t know was holding you back.”). Plus, the album-closing title track. “’Ready for Me’ is the name of the album and the 13th/final track on the record. I thought it would be a strong album title because it’s basically – Are you ready for me? I don’t think you’re ready for me; ready for me or not, here I am.”).
With hard rock roots and melodies that show off her vocal range, Madame Mayhem is excited to bring these new, unreleased songs to the masses this fall, as she will be hitting the road with Austin John Winkler (formerly the voice of Hinder) and Smile Empty Soul this fall on the Love Sick Radio Tour (presented by M7 Agency) in the U.S.A., before heading over to Europe and the U.K. for dates with Fozzy and Hardcore Superstar.
“I am so excited to play this new music live! Really looking forward to touring Europe and The UK in October and November 2017!”
The singer has performed across the United States to packed rooms, including B.B.King Blues Club, The Roxy, The Viper Room, Bowery Ballroom, Knitting Factory, a residency at The Cutting Room, the Bluebird Café during Grammy nomination week, Shiprocked Cruise 2017, Sunfest 2017, Sturgis Buffalo Chip 2017, and has performed on national tours with renowned and respected artists such as Doro and Mushroomhead.
With ‘Ready for Me’ and tour dates on the horizon, Madame Mayhem is setting the stage for what promises to be a big 2018 with this string of worldwide tour dates in 2017!
FOR MORE INFORMATION, PLEASE VISIT:
www.MadameMayhem.com
www.Facebook.com/MadameMayhem
www.Twitter.com/MayhemOfficial
www.youtube.com/MadameMayhemOfficial