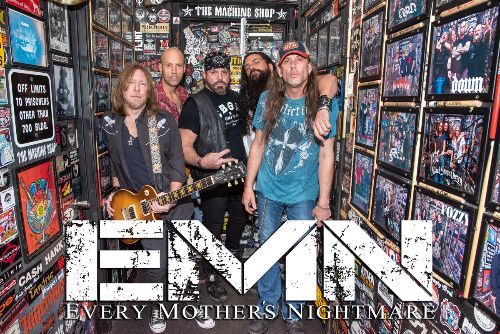 Memphis, Tennessee’s EVERY MOTHER’S NIGHTMARE continue their rock n’ roll assault with the recent release of their new video &  single ‘Southern Way’. The track comes from the latest reissue ‘BACKTRAXX’ one of the most sought after releases in the EMN discography. ‘BACKTRAXX’ was repackaged and remastered with bonus material added.

“Some people think it’s new because they’ve never heard it. BACKTRAXX is a very different beast, this record is almost 20 years old but it is still strong and stands the test of time. I was writing some of these songs for what would have been the 3rd release for Arista. It was ahead of its time. We freshened it up and reissued it due to the demand?” says Rick Ruhl

Since finding their home with HighVolMusic, EMN has been nonstop since the release of GRIND in October 2017, reissue of SMOKIN’ DELTA VOODOO in June 2018, GRIND GREEN VINYL in March 2019, and now BACKTRAXX 2019. The band continues to tour and support all their current projects and has dates on the calendar with more to be announced including a west coast tour and festival appearances in Europe.

We’ve got a great thing going, these boys work hard and deliver in every aspect from the studio to the stage. Professional in every aspect and a helluva lot of fun to be around. Rick Ruhl is the most humble rock star I’ve had the please of dealing with. That guy is a master at his craft.” – Bill Chavis, CEO HighVolMusic

EVERY MOTHER’S NIGHTMARE recently entered CrossTrax Studio once again with producer Justin Rimer (12 Stones, Breaking Point) to begin recording the follow up to GRIND. The first track titled ‘Getaway’ is complete and is slated to be released as a single later in 2019 with new album having a tentative release date in the first quarter of 2020 before the band heads over to Europe.

Tour dates and more info can be found at www.highvolmusic.com or www.emnrocks.com.

Check out our latest interview with EMN frontman, Rick Ruhl, here and follow us @ThePureRockShop for the latest news on hard rock and metal music locally including Glen Sobel’s Goon Squad featuring members of the Alice Cooper band and Bang Tango and Faster Pussycat; as well as festivals, including Rock the Roses“Hair in the Fair” Festival in Welland, Ontario featuring Quiet Riot, Dokken, Sebastian Bach and more this July.

Catch radio interviews and pure rock programming, including music from EMN, and more on 91.7 FM WNJR in Pittsburgh and online at WNJR.org daily from 3pm EST – Midnight.