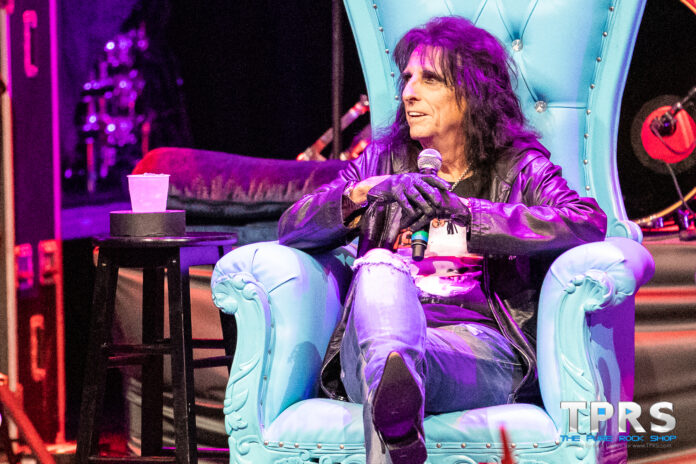 The fifth and final day of the cruise was a day at sea, and for me it was a bit more scaled back than most when it came to shows.  This is when it sets in that you have to say goodbye to your friends, your music “family.”

After checking in at the photo experience, I headed to the Alice Cooper Q&A in the Royal Theater and sat down just as Alice took the stage. We got to hear some great stories from the legendary Alice Cooper during the very entertaining dialog between him and hosts Don Jamison and Keith Roth (and of course some great the questions from the crowd).

Honestly, it was nice to kick back, and I laughed so hard at the chicken story that I was literally in tears.  This was one of several other Q&A sessions throughout the week, and while I rarely have time to check them out, they seem to be well worth the investment for anyone who is a big fan of a band.  I suppose as a journalist, I have the chance to ask most musicians anything I’d like and may often take such an opportunity for granted.

Up next was Tokyo Motor Fist at the pool stage. This was the third set that Ted Poley fronted on the boat, and the second for Tokyo Motor Fist. Similar to the band’s first set, they covered their own material along with a few surprises. Once again these guys were performing up against SOTO and I had to cut out before they finished.  One of those difficult choices, because this time, Greg Smith treated fans to the Rainbow classic “Street of Dreams” and Steve Brown fronted the band for Trixter’s “Give it to Me Good.” 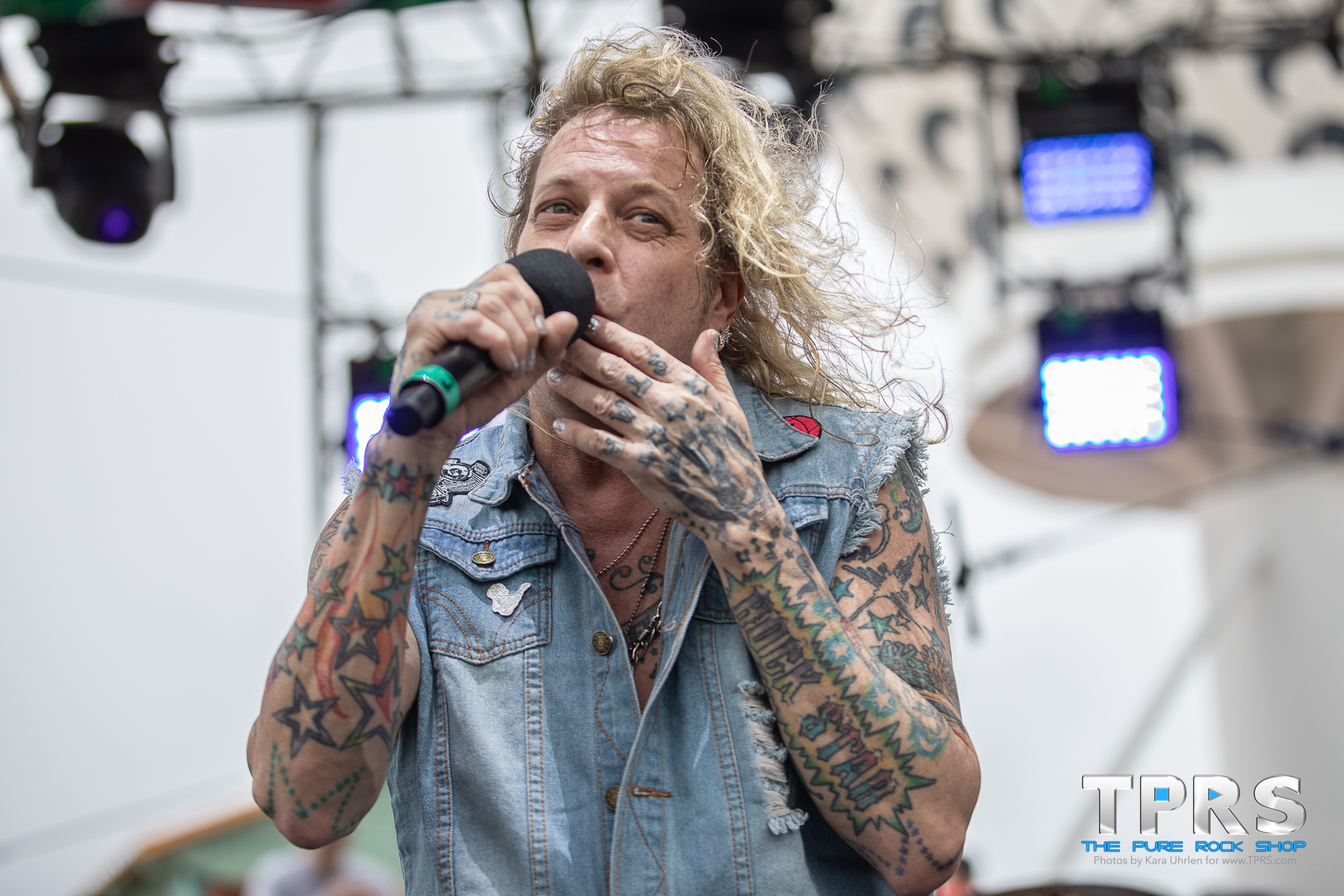 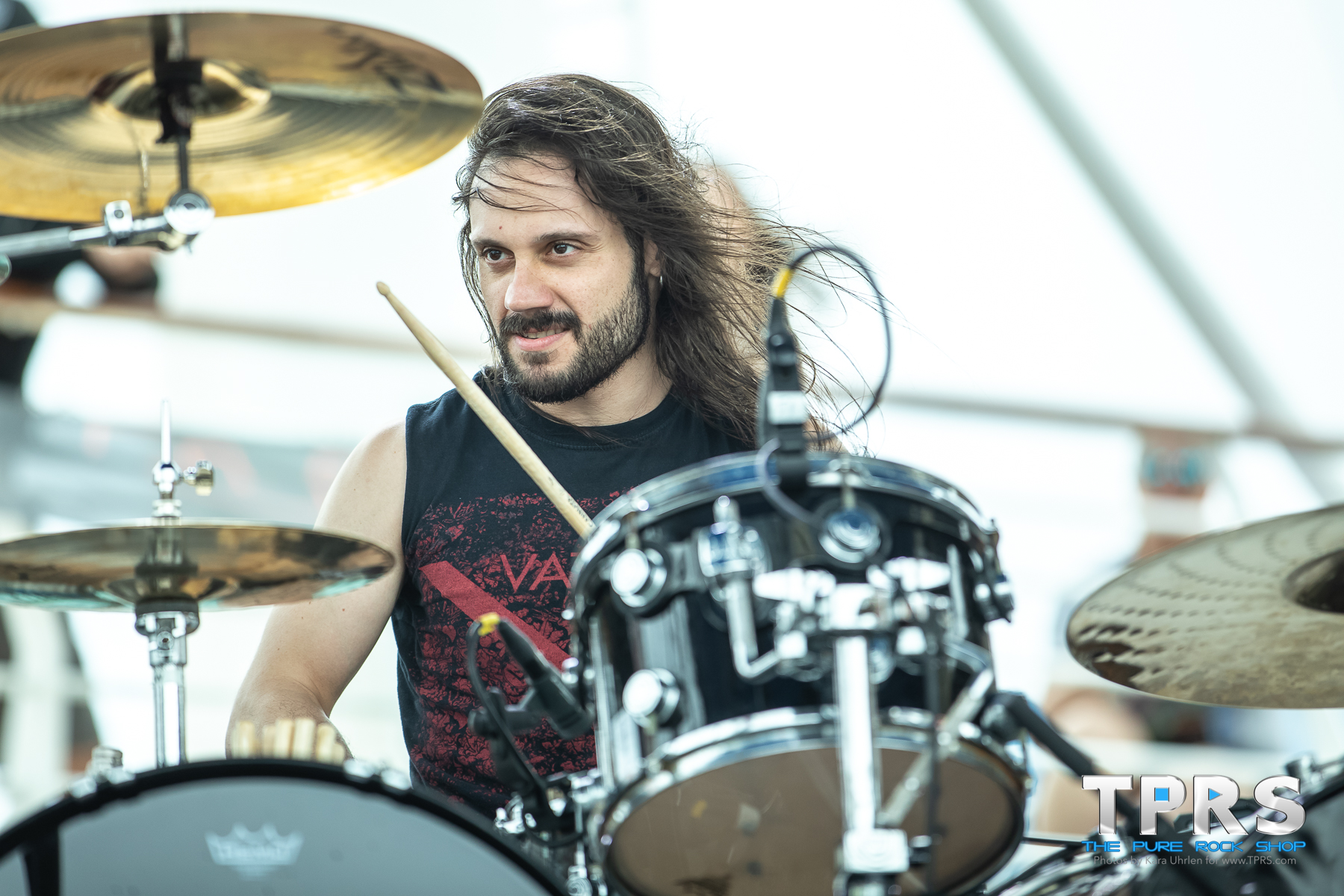 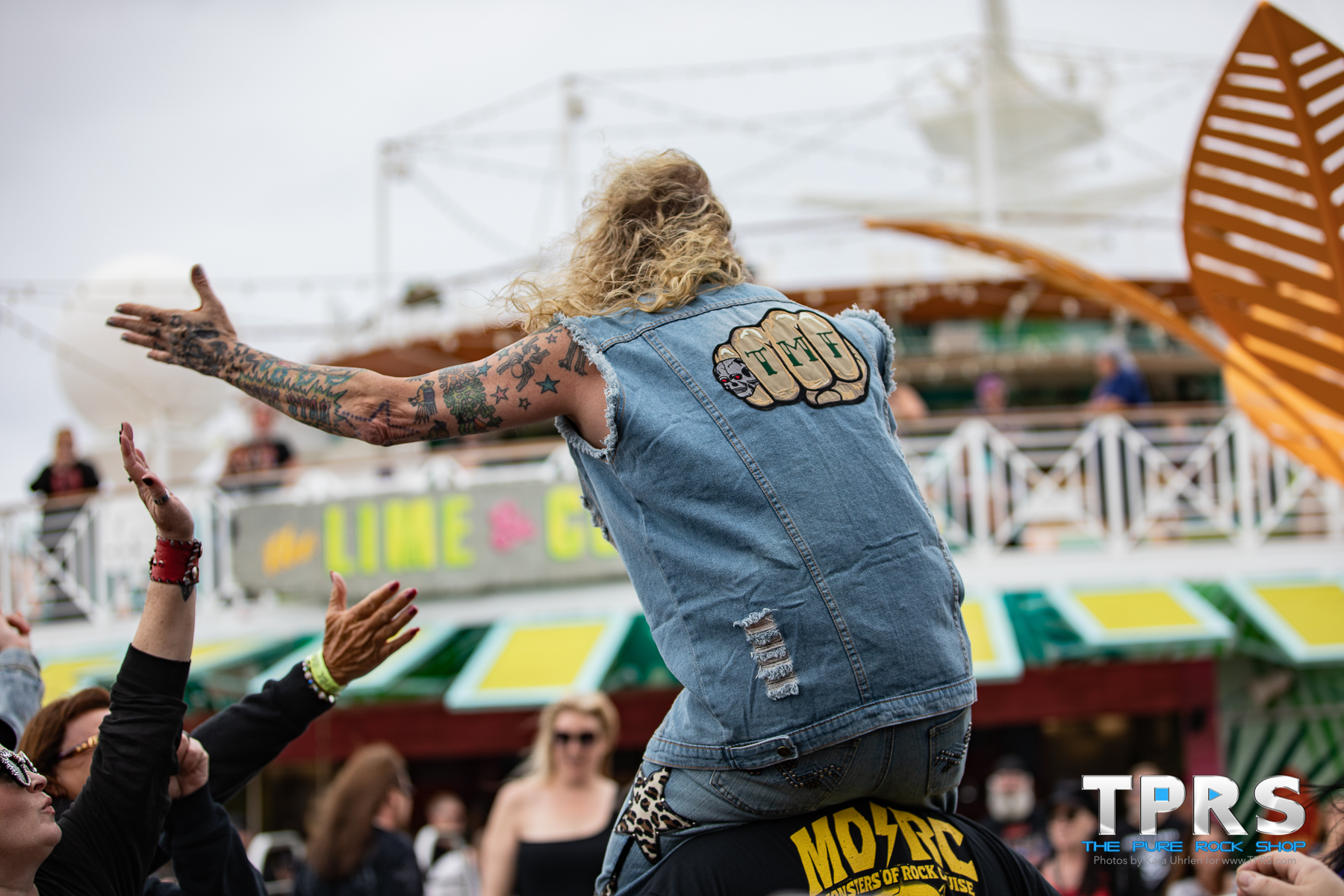 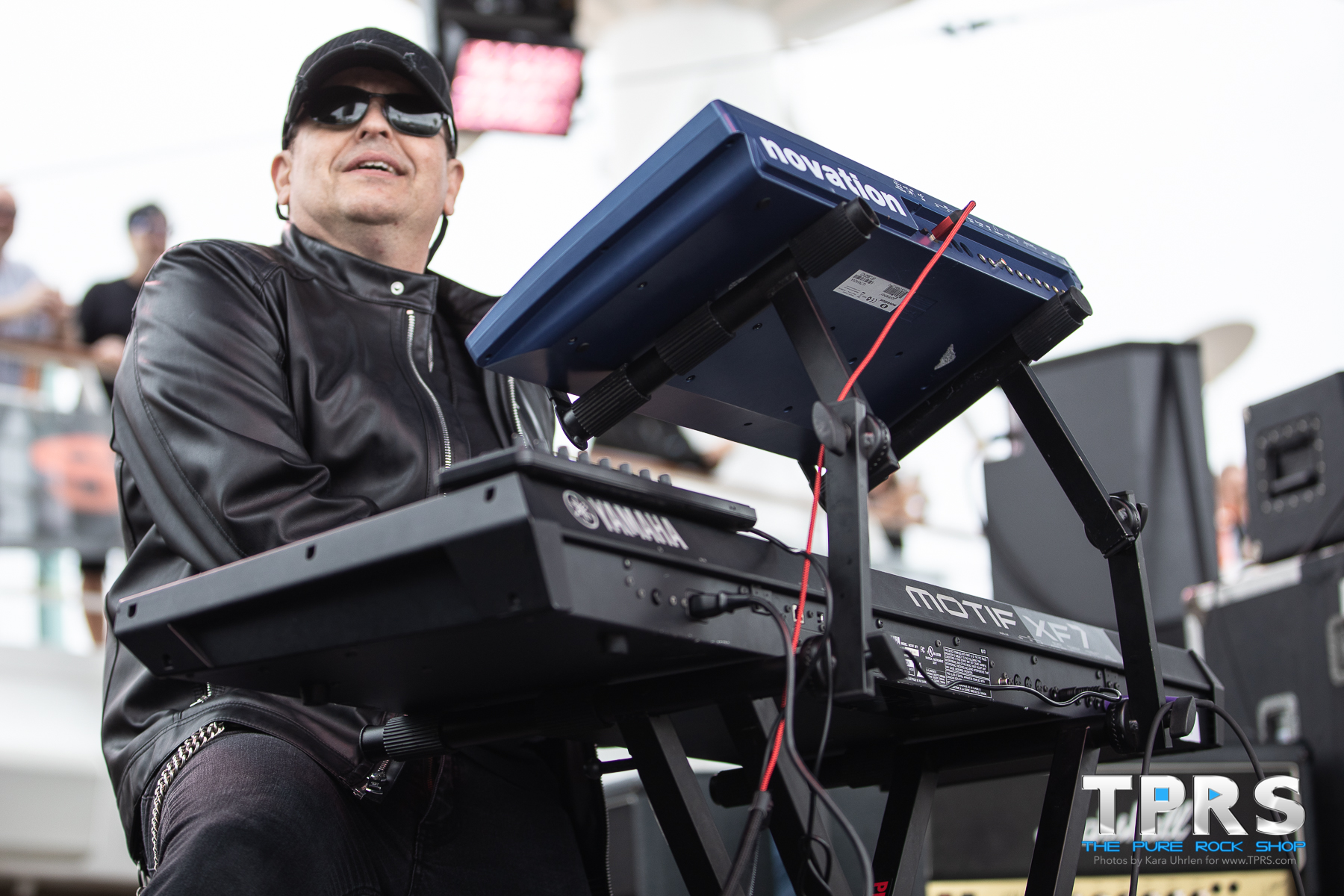 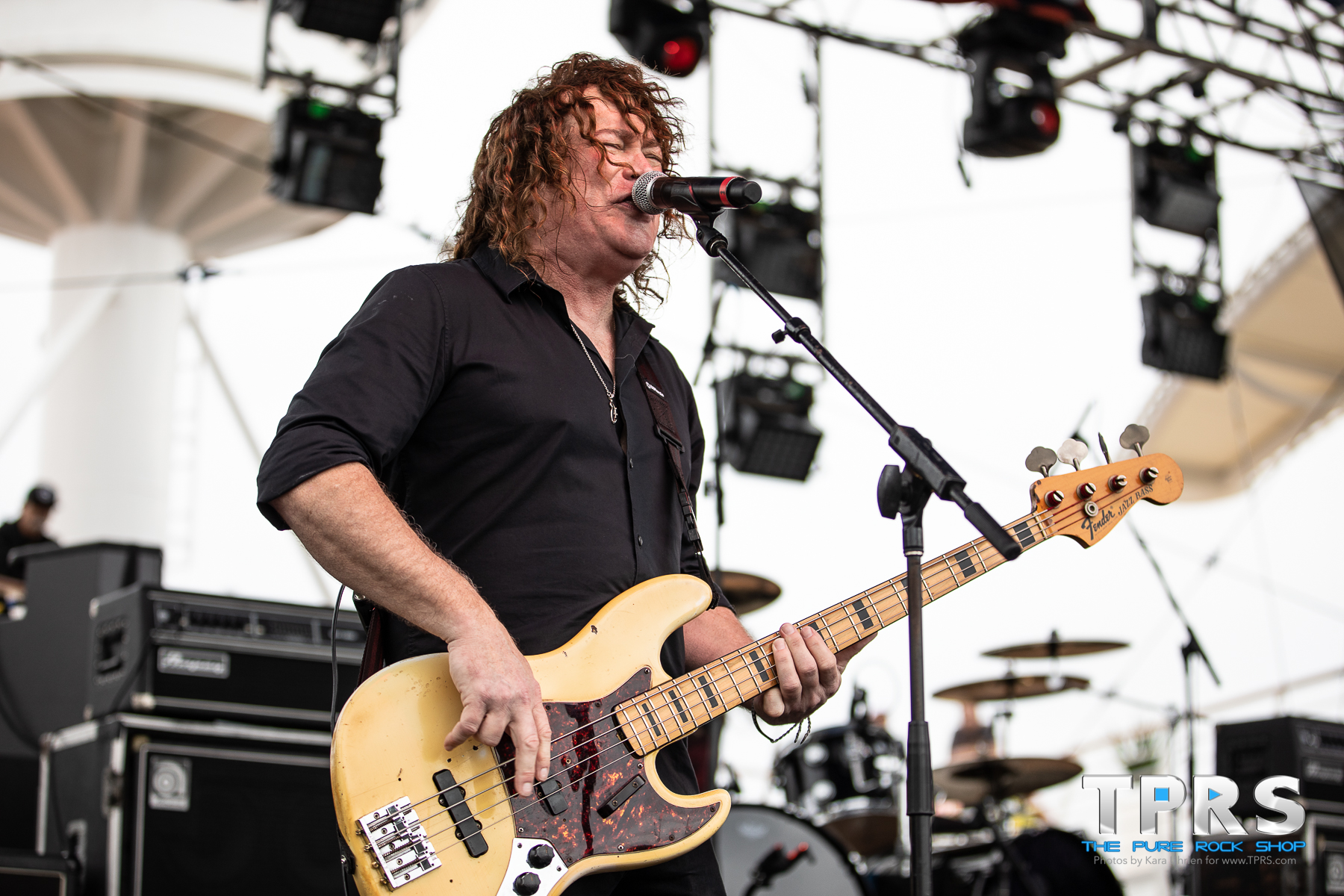 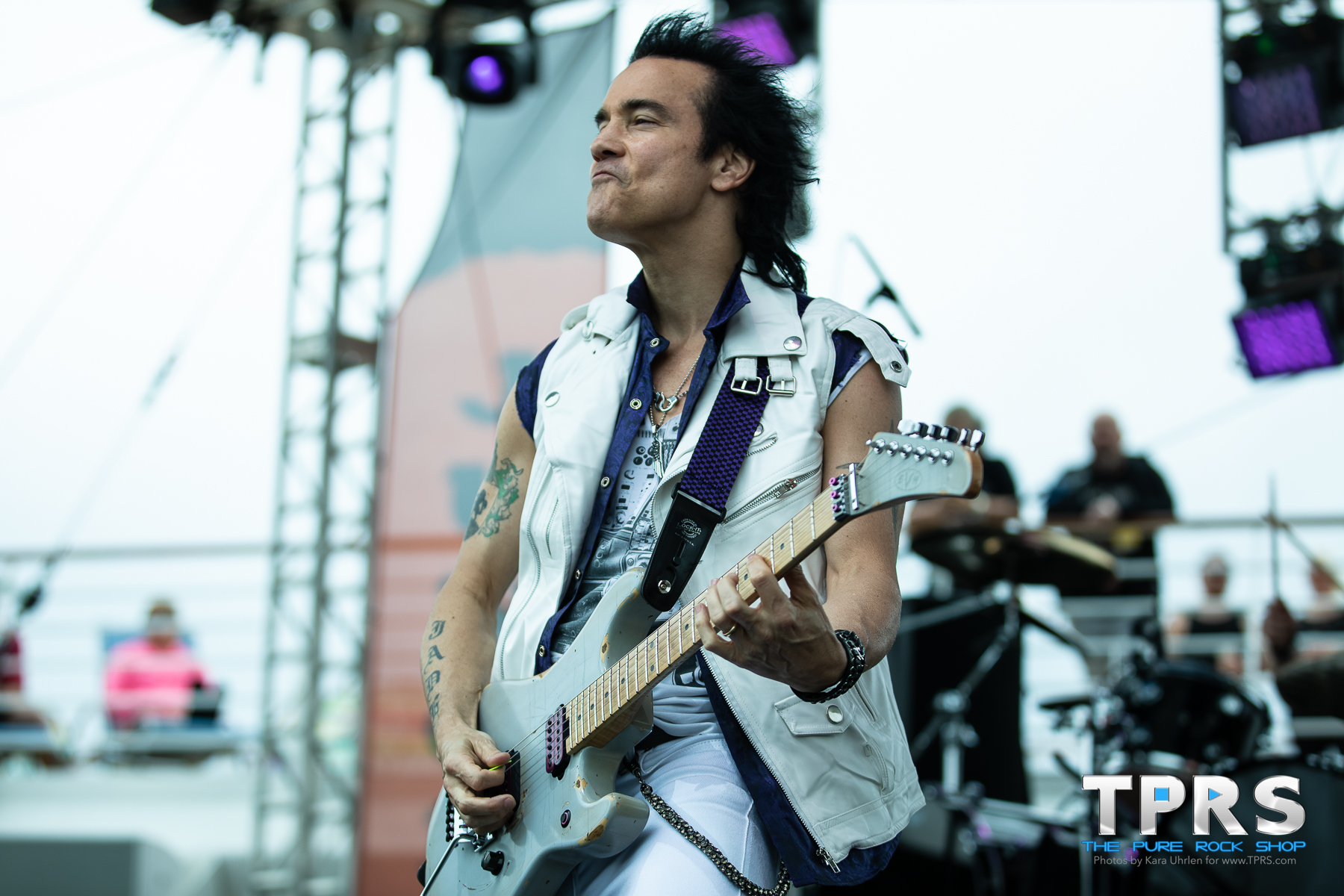 Definitely a difficult choice, because the performance everyone was anticipating was the second SOTO performance in Studio B.  One would have expected a W.E.T. medley with members of Eclipse and Tailisman on the boat, but we couldn’t have predicted all of the other surprises that occurred during this show.

Special guests included Dino Jelusick, who performed a duet of “Stand Up” from the Rockstar movie with Jeff and Kip Winger, who performed a “Soul Divine” duet with Jeff, and that wasn’t all!  For anyone having trouble keeping track of all the music that Jeff Scott Soto has recently released, such performances were inspired by The Duets Collection which also includes Erik Martensson (Eclipse), Mats Leven (Vandenberg), and BJ Singer (Spektra, SOTO), just to name a few. You can get a somewhat recent update on the catalog from our interview with Jeff last year.

Everyone was tricked into thinking that Jeff’s friend Jason (from a Van Halen cover band) was going to perform a duet as well, but when his girlfriend Shay was asked to join them on stage, things got even more exciting when he pulled out a ring.  You’d think it can’t get much better than this, and then you add Jeff’s other friend Jason (Bieler), Joel Hoekstra, and Magnus Henriksson to the mix.

And, before Closing things out with an encore of their “Boogie Nights” medley, SOTO invited several Swedes to the front of the stage for a game of pass the microphone for “I’ll be Waiting.”  And when the show ended, I was honored (and a little unprepared – why would I have my flash at a concert?!) to snag the group shot for the ensemble.  All these shenanigans caused the show to run over, and my friend Neil had already left to shoot Alice Cooper (as did Kip Winger, though we do think it would have been funnier if I’d accidentally cropped him out). 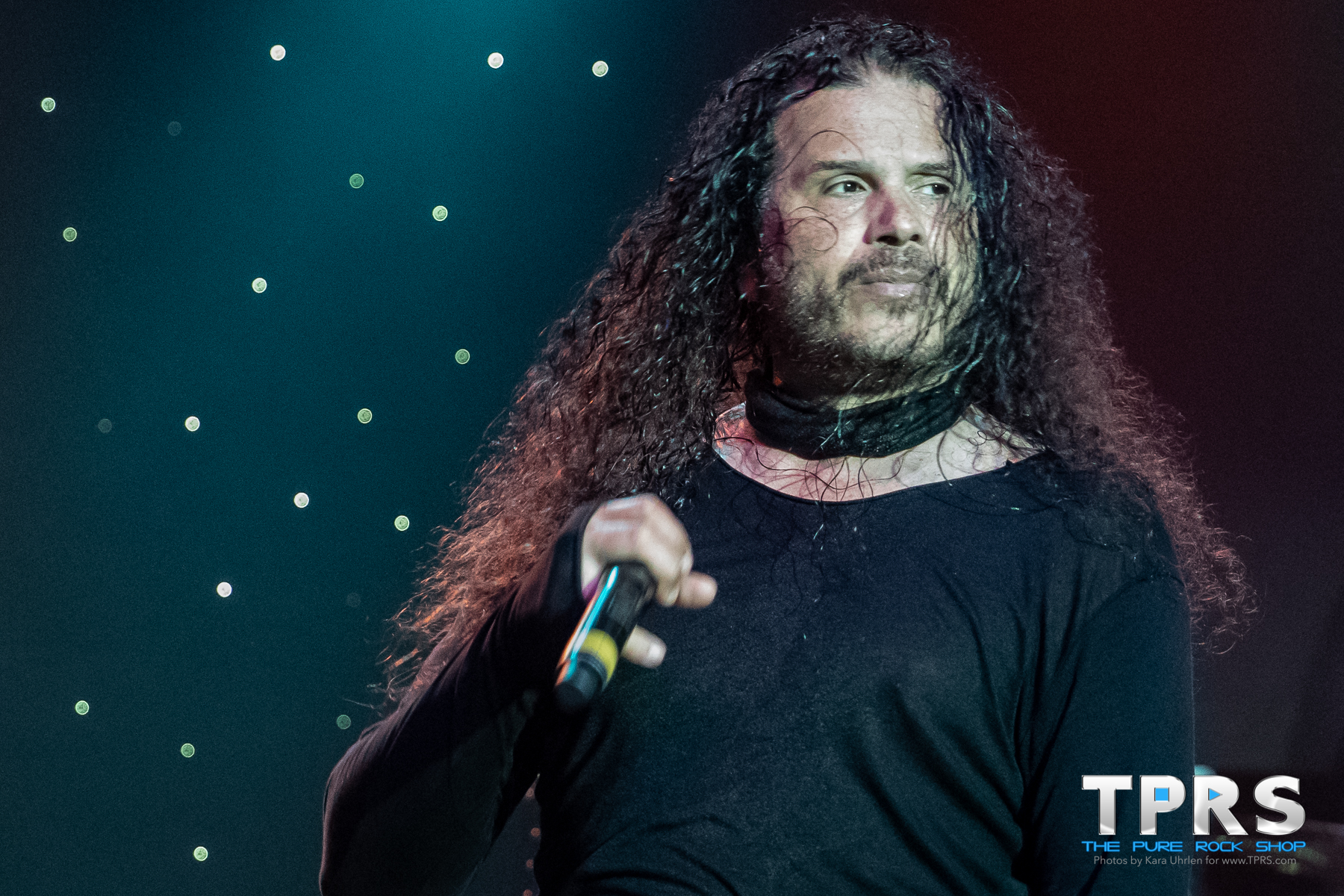 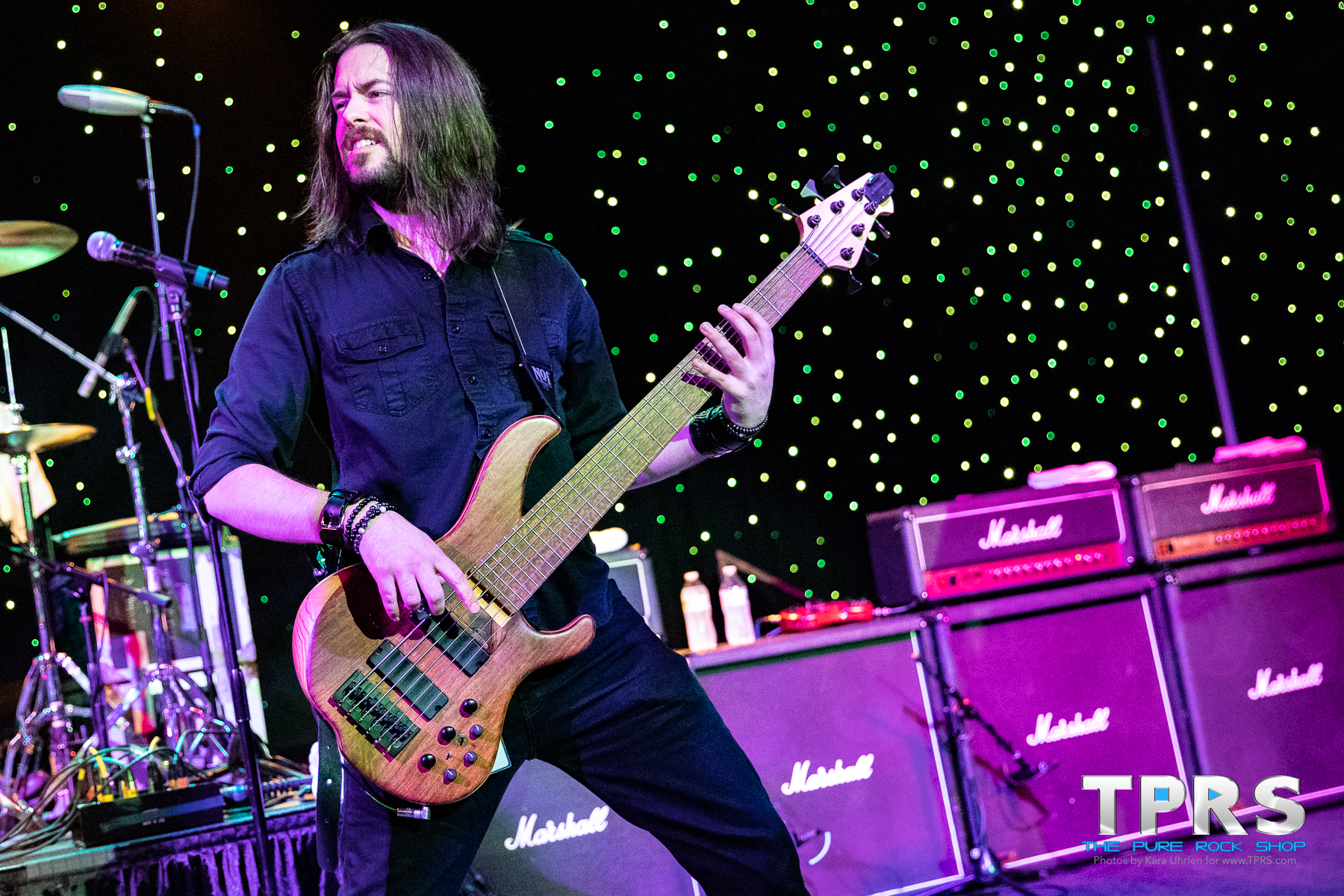 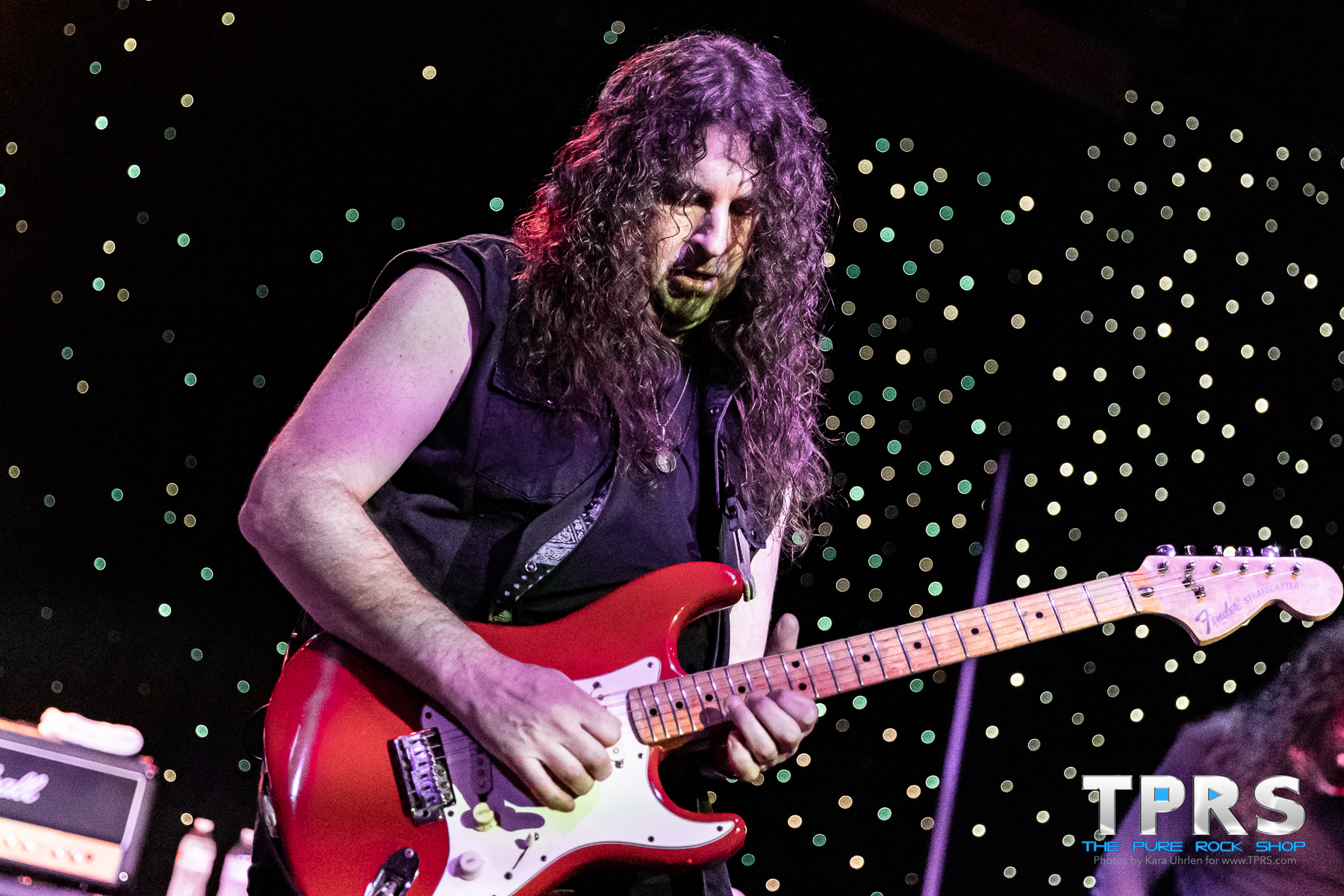 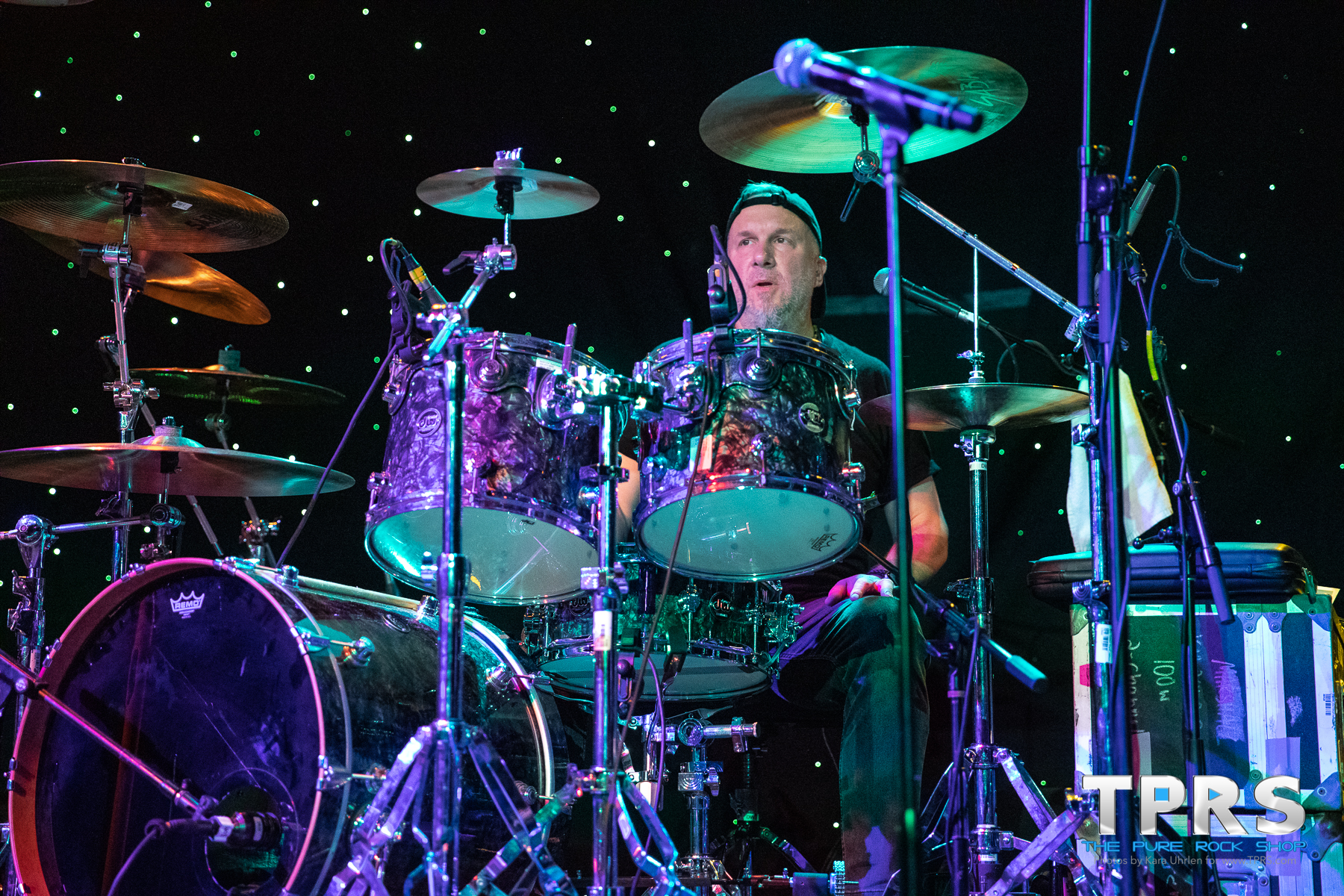 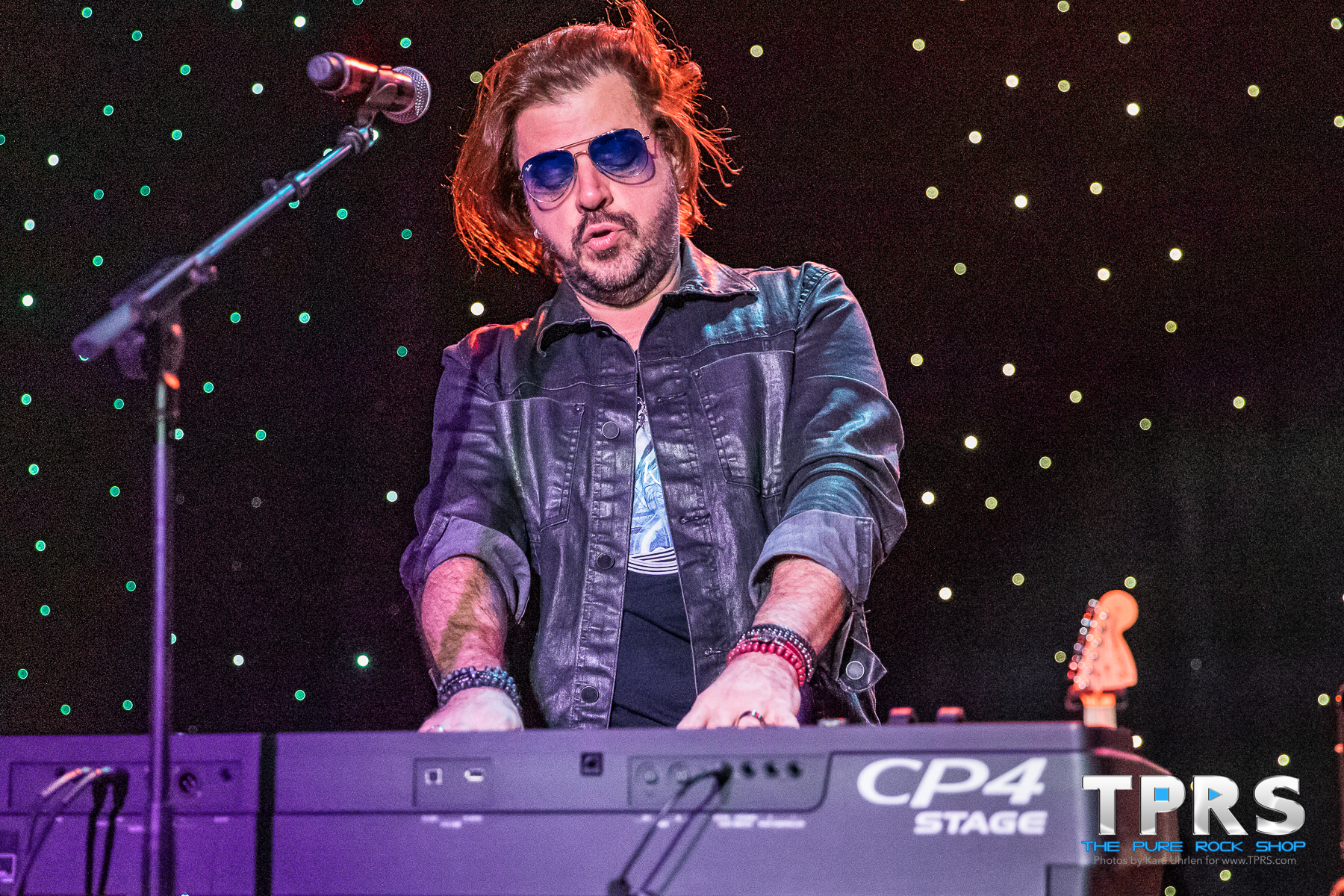 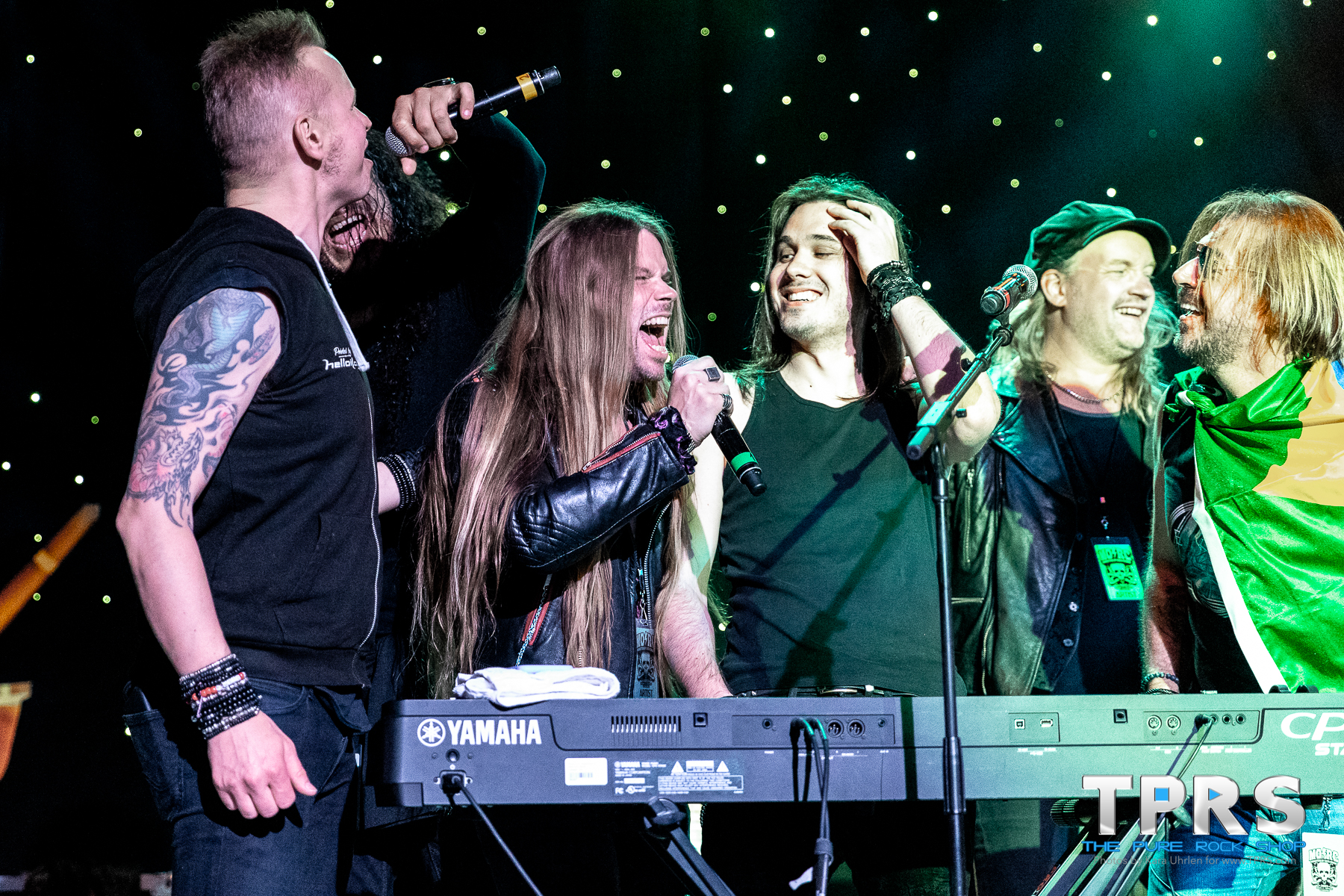 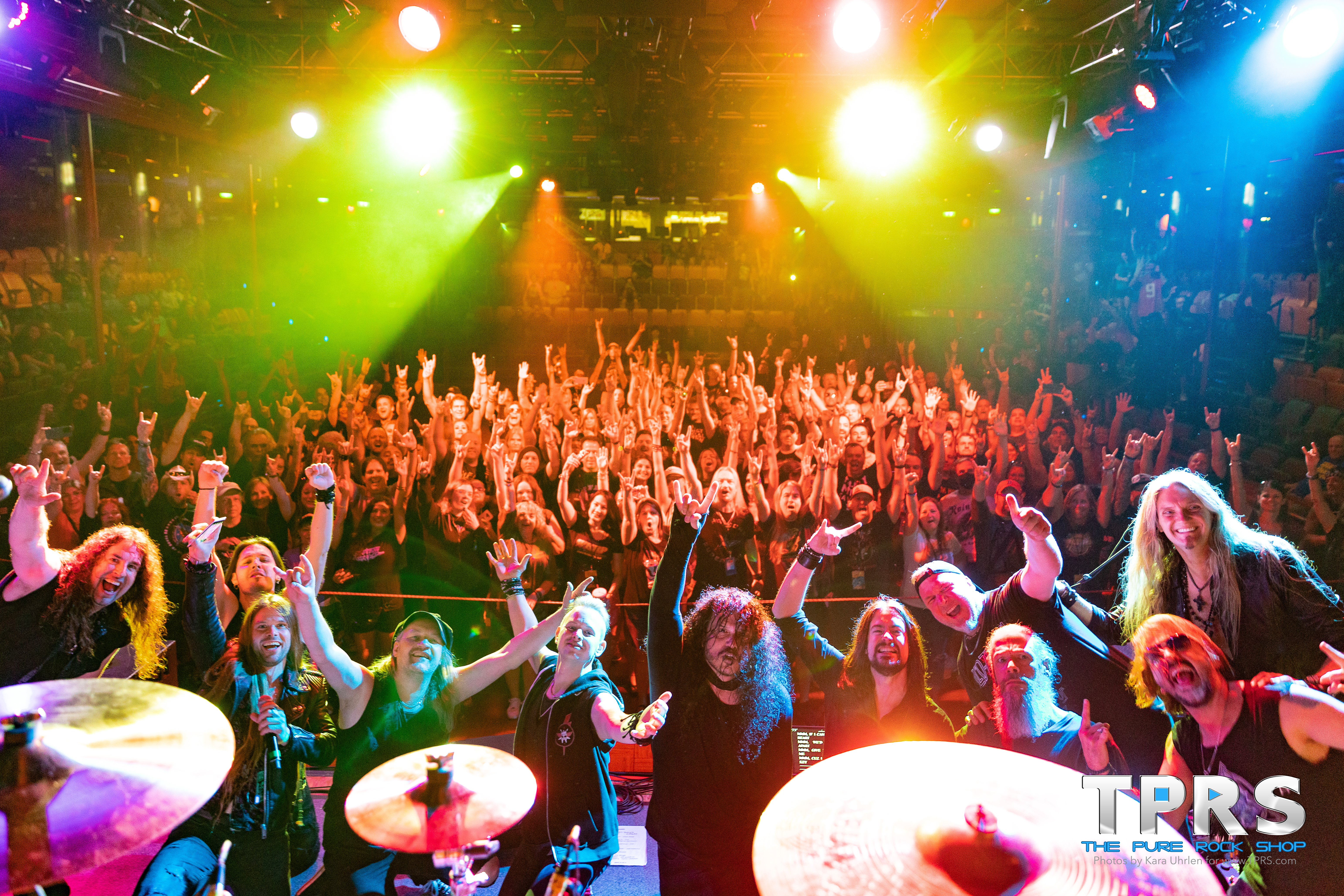 After SOTO I made plans to meet up with my friend Don Crash (H.E.A.T.) for a photo shoot hitting various locations around the boat.  I’m sure many people were wondering what we were up to especially when he hit the hot tub and solarium pool fully dressed.  You’ll just have to follow his Instagram to see the results.

As is tradition, I gathered with as many friends as I could for a farewell dinner and had high hopes to also catch John Corabi and then Black ‘N Blue during Super Bowl halftime, but instead I learned a valuable lesson about the dining room on the ship. Do not leave your table if you are looking to eat quickly! The dining room staff is not accustomed to our busy schedules on the ship.  They don’t understand that people are coming and going from the table because we are working too, trying to call home, coordinating with other friends, missing people we’d planned to meet, and well, just not your normal cruise crowd.

So, when we had swapped out several people at the table before we finally asked where are dinner was, we realized that they’d been waiting for everyone to sit down and it was actually getting cold on a tray nearby! So, I only saw Corabi passing by that night and the only photo I caught of Jamie St. James was in his football jersey long after they played.  But, I did have lots of fun in the dining room with all my friends.  And as I look around the table, I can tell you that I only met one of those amazing people somewhere other than “the boat.” How cool is that?! 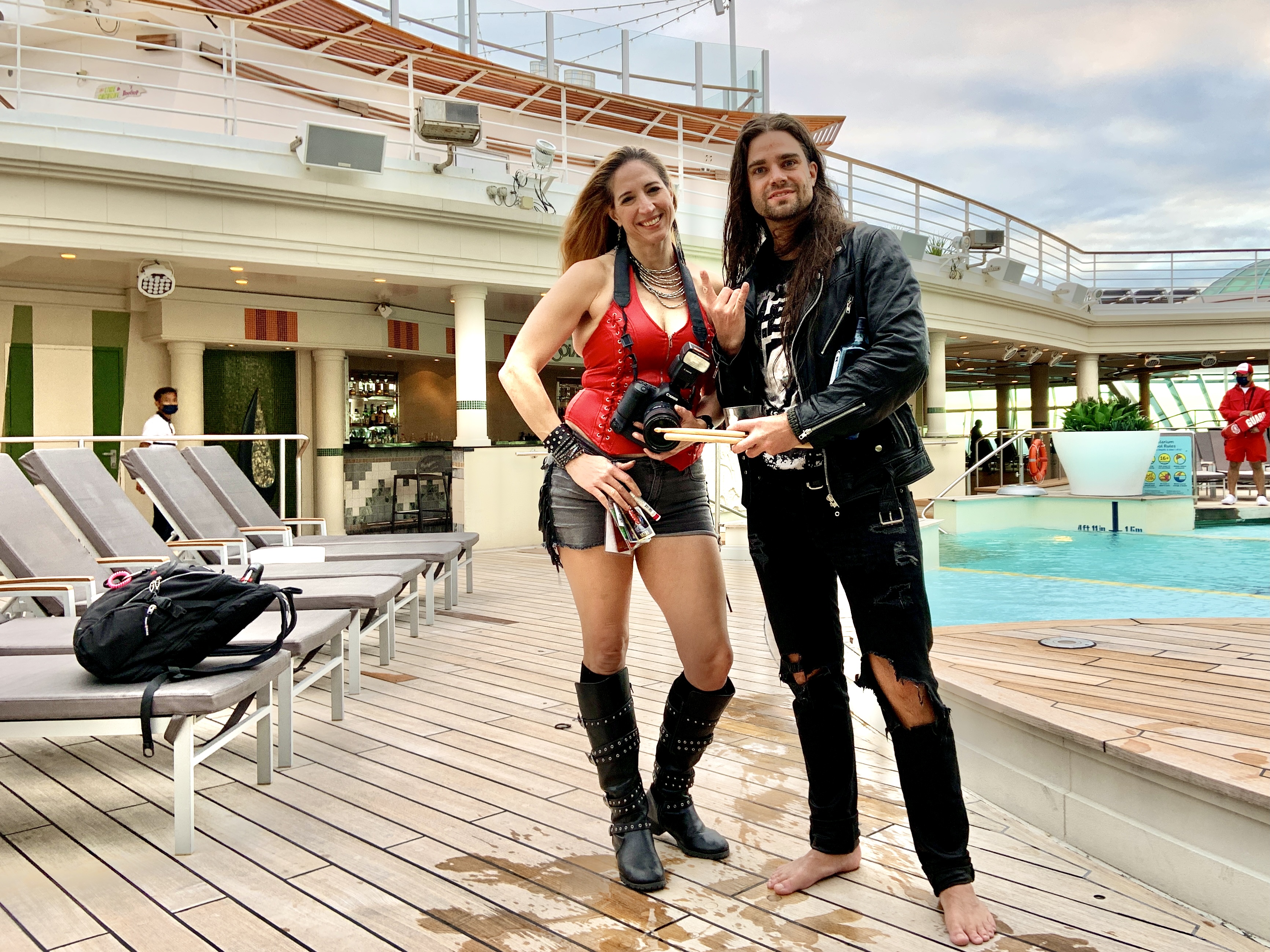 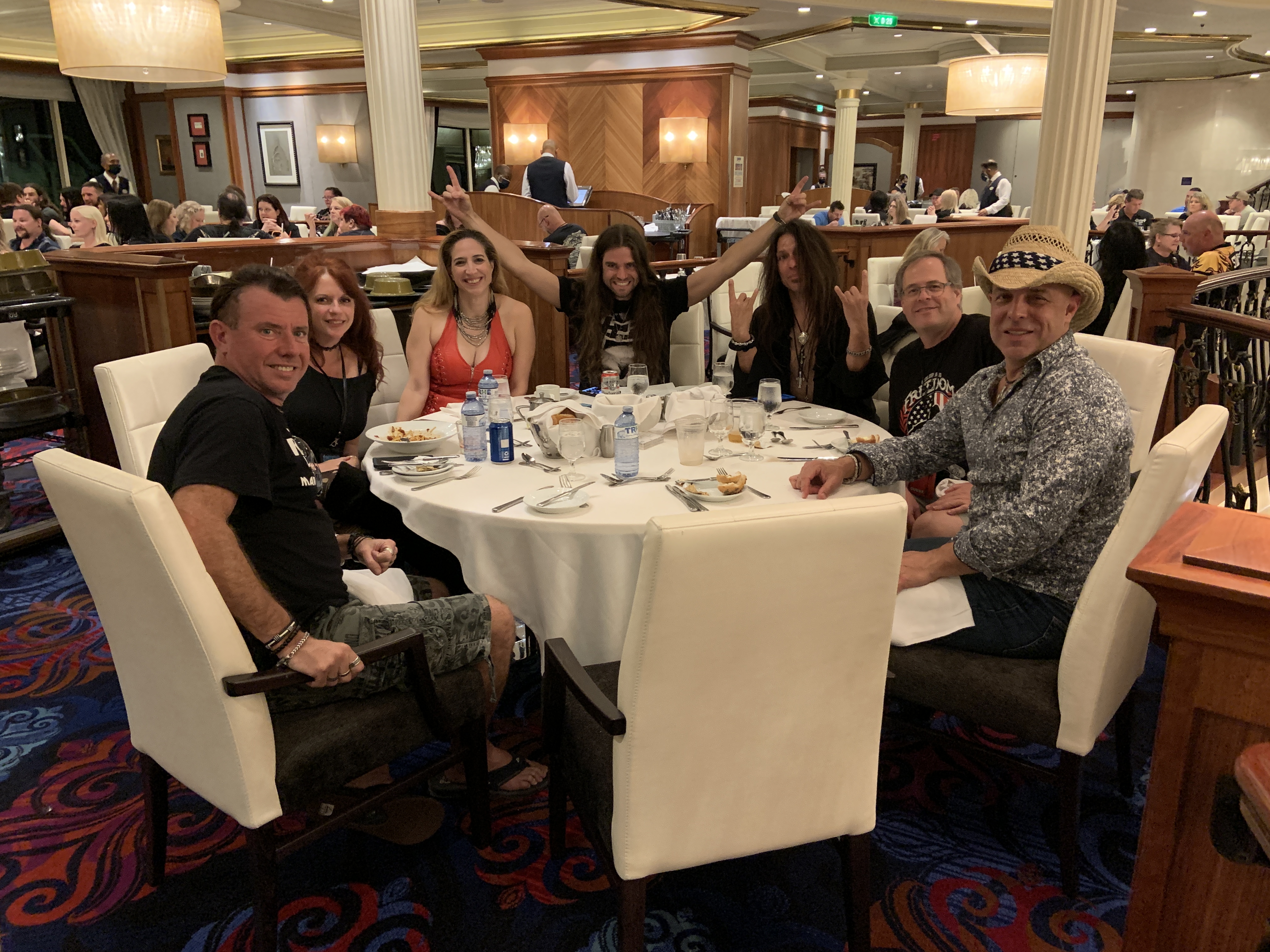 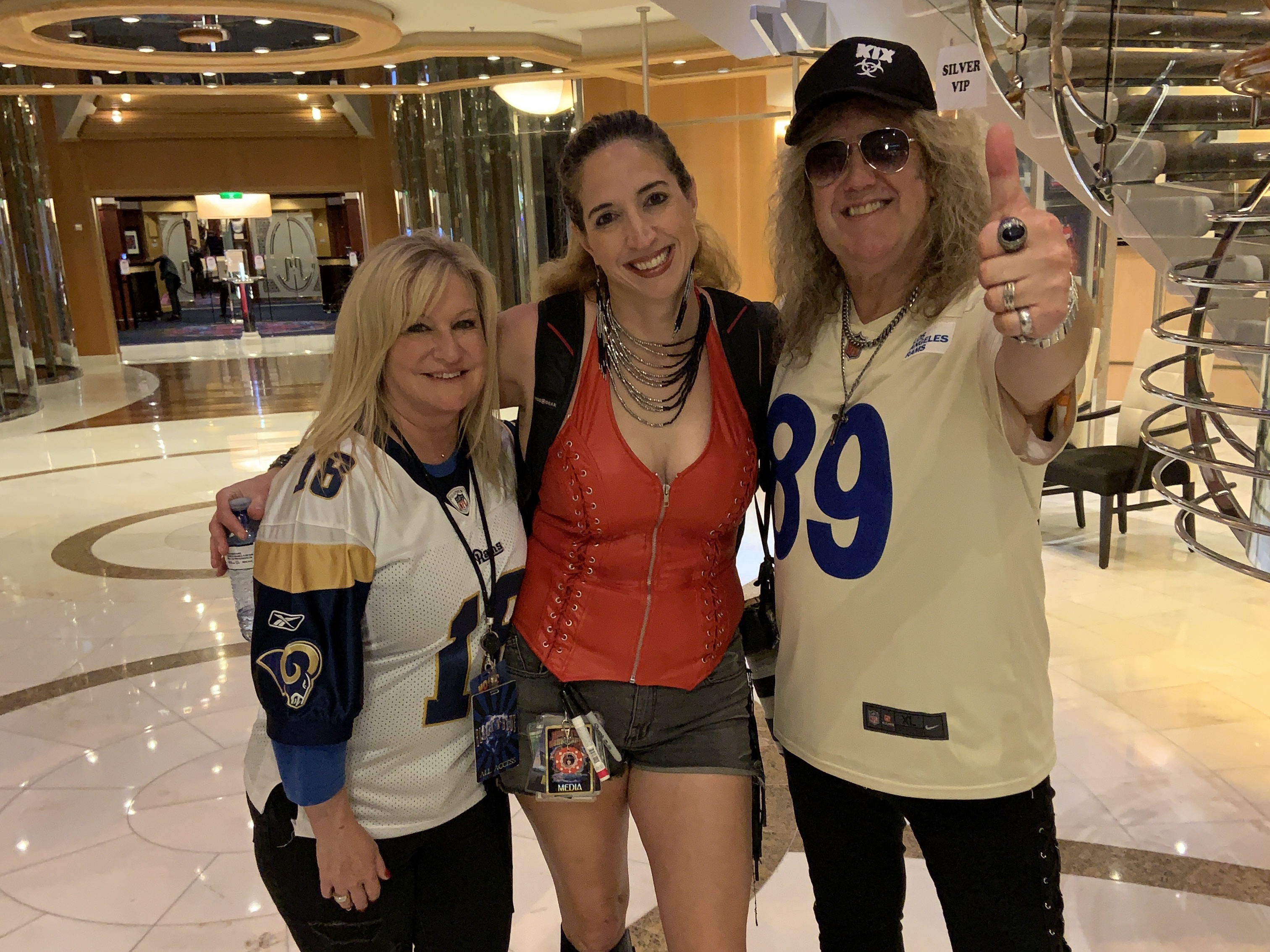 After packing up my room, editing that group shot from the SOTO show, and putting my luggage out for some much needed assistance, I headed to the Royal Theater to see Geoff Tate and his band, who joined the cruise after Queensryche dropped from the bill.

Tate has been performing both the Rage for Order and Empire albums together on the road in honor of the Empire anniversary.  I’ve been lucky enough to catch that show twice locally, just like the Operation:Mindcrime set.  On the cruise, his first show, which was two days prior, had covered Rage for Order, and this performance focused on Empire.  He performed the entire Empire album during this set, and then finished up with “Last Time in Paris” from the soundtrack for the film, Adventures of Ford Fairlane.  Tate now has Alex Hart joining Kieran Robertson on guitar, Jack Ross remains on bass, and Daniel Laverde is on drums. 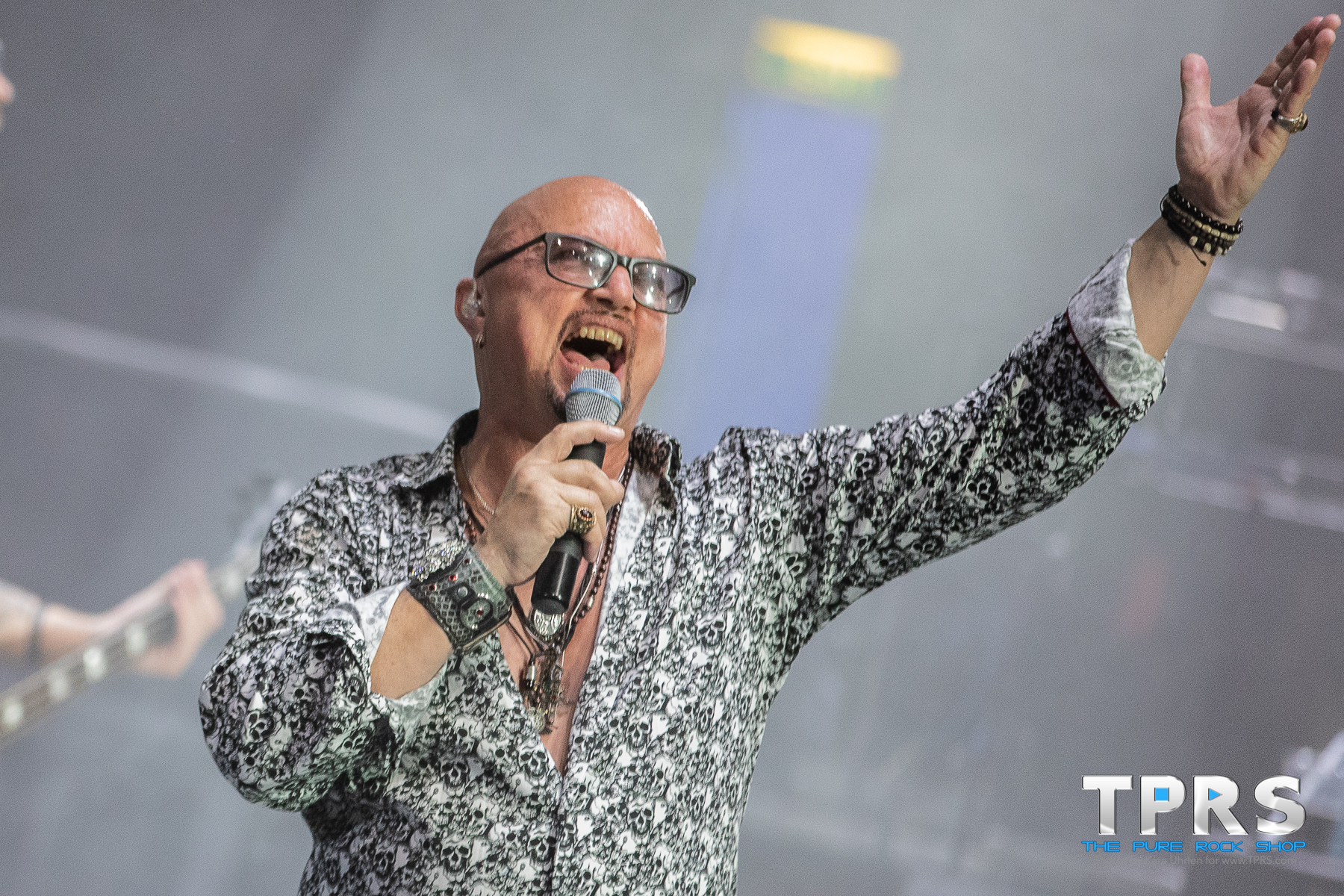 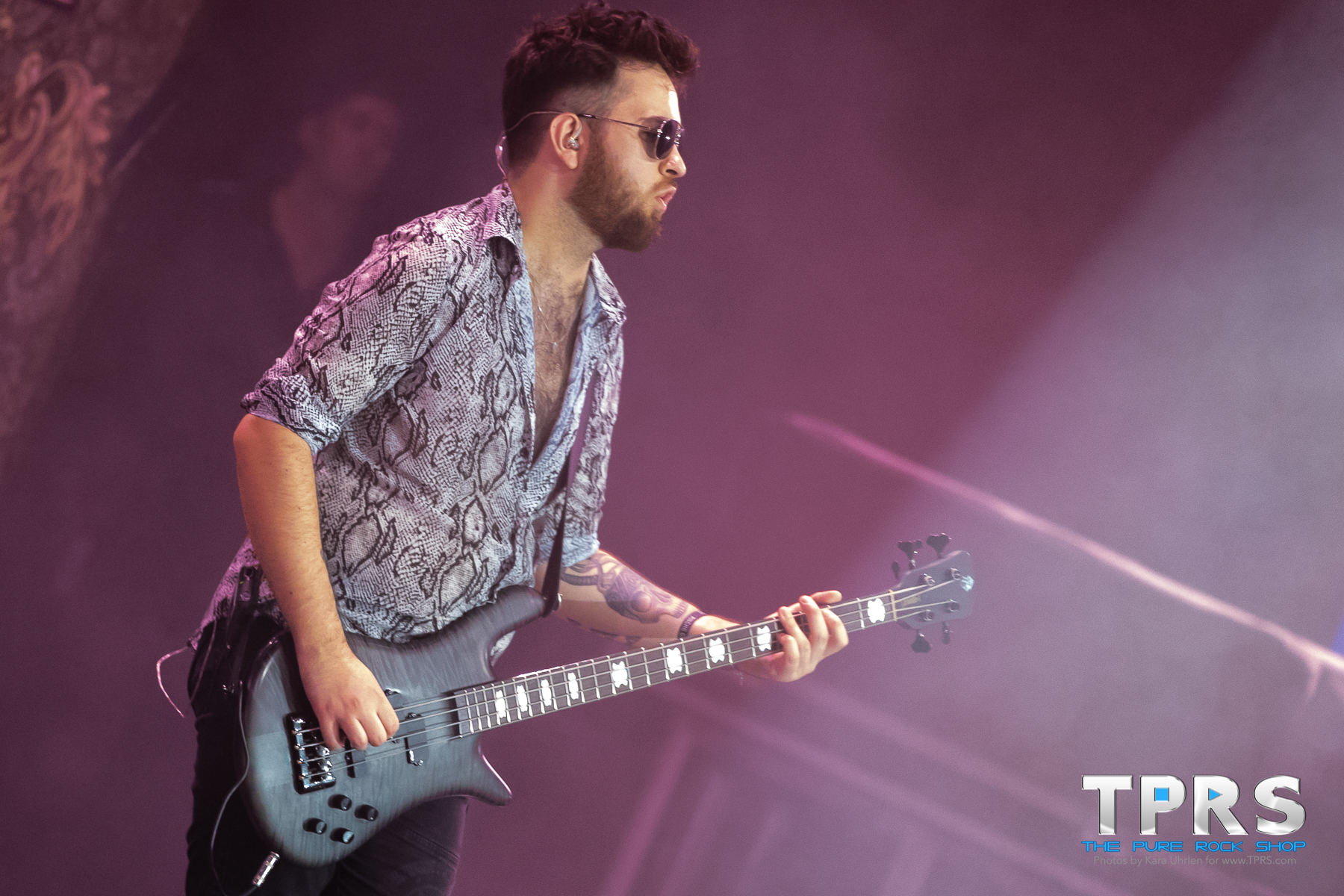 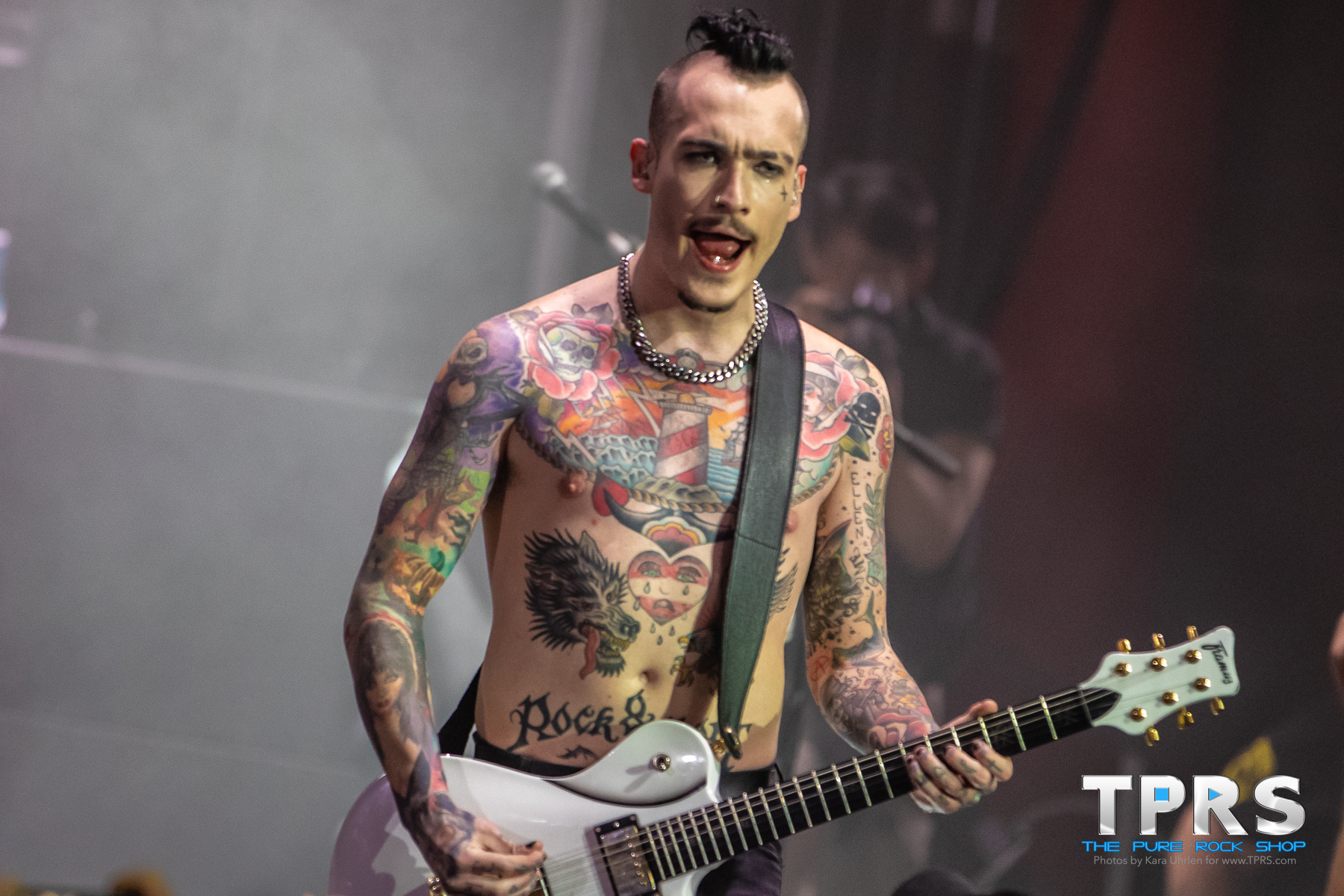 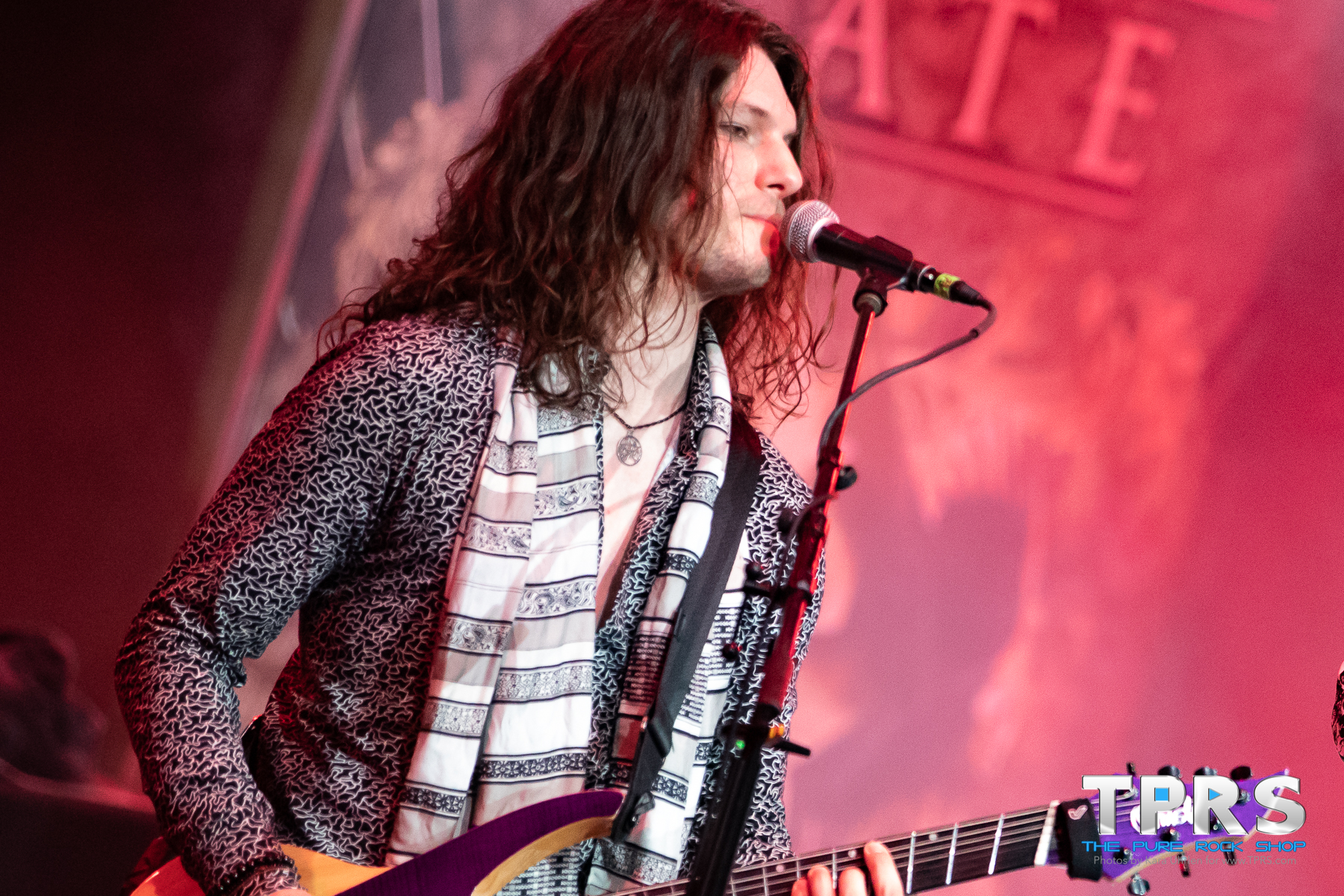 After Tate I enjoyed the ceremonial balloon drop on the promenade and then headed to the karaoke lounge early as the artist party was still lingering.  This allowed for the opportunity to catch a duet of Trans-Siberian Orchestra’s Dino Jelusick and Gabbie Rae singing “Rock ‘n Roll,” and a gritty performance of “Ace of Spades” by Mats Leven. Later, as I’d mentioned in my day 4 coverage our friend Frank Puppilo from Shot of Poison joined forces with Jonny P. from Bad Marriage singing “Dream Weaver,” but it was really just a ploy to wish his girl Melissa a happy birthday. It was hard to say good night, so we ended up wandering around the promenade after the bar closed and taking pictures with my girlfriends.  After all, who needs sleep! 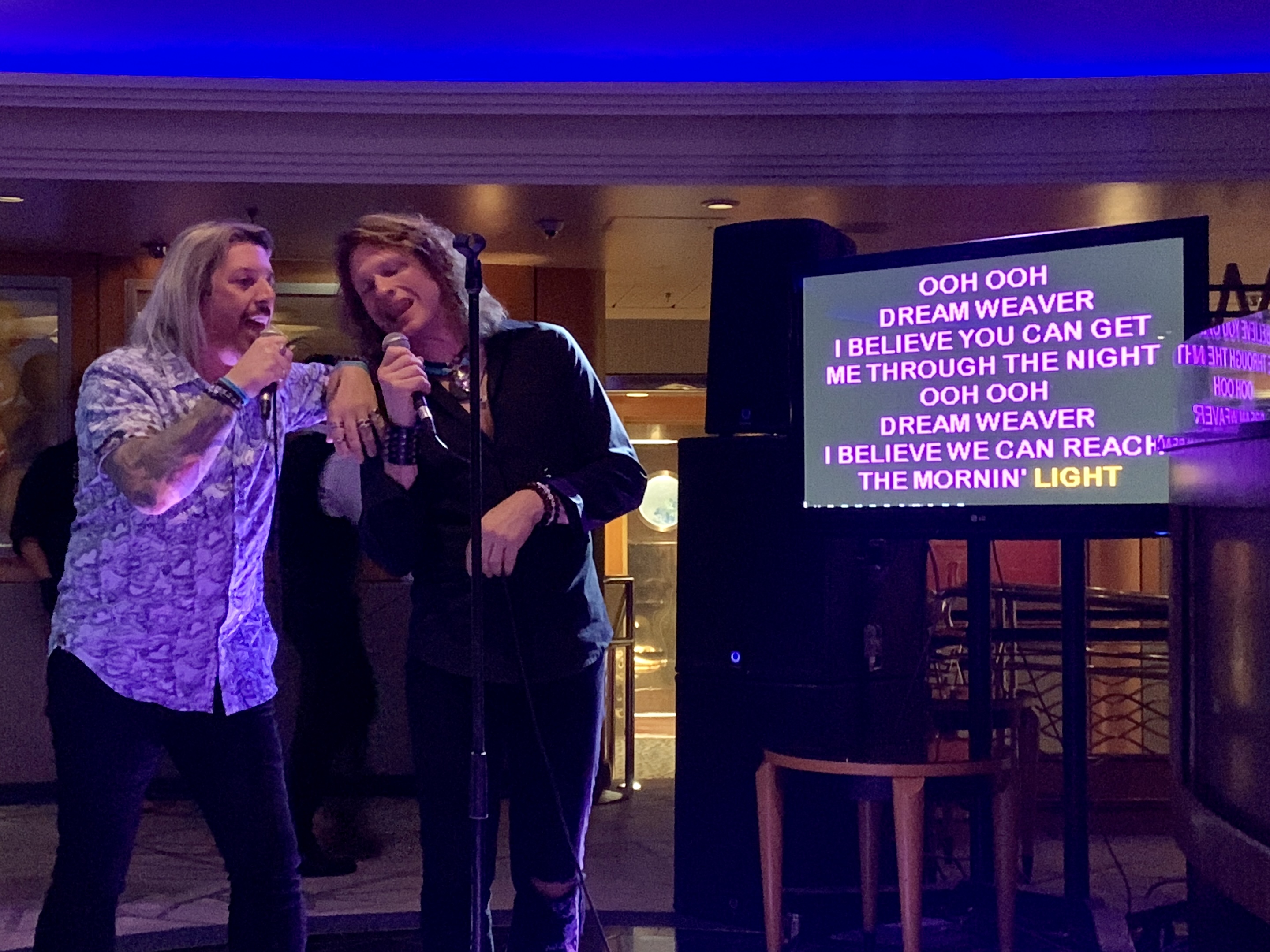 For more coverage from the cruise, check out the pre-party re-cap as well as day one, day 2 coverage,day 3 coverage, and day 4 coverage.  And, visit our archives for more interviews including chats with Joel Hoekstra, Jeff Scott Soto, and Erik Martensson from Eclipse.

Follow us @ThePureRockShop on Facebook and Instagram for more local show coverage like Buckcherry and Alice Cooper, Firewind and Dragonforce, Firehouse, and Slaughter, as well as festival coverage including more from the Monsters of Rock Cruise and upcoming M3 Music Festival in May in Baltimore and Masquerade in Philadelphia in July.