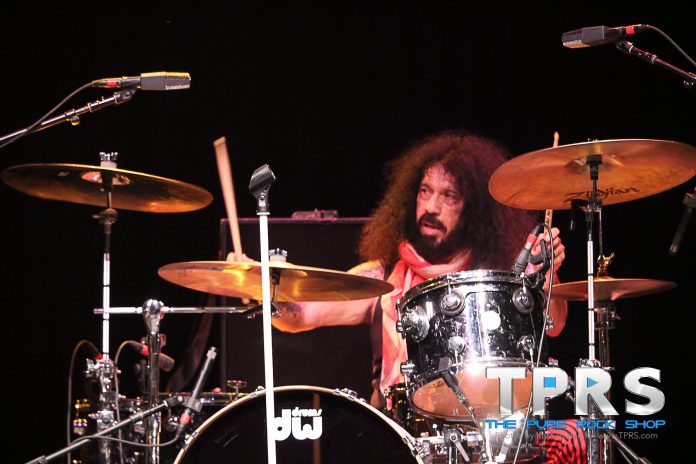 The Pure Rock Shop catches up with Quiet Riot  drummer Frankie Banali to discuss the band’s release of “One Night in Milan” featuring current frontman James Durbin, as well as the drive behind his desire to continue on with Quiet Riot after the loss of his friend and bandmate Kevin Dubrow.  Also, learn how Quiet Riot structures their set list to include newer material such as “Freak Flag” from their 2017 Road Rage release with so many arena rock anthems in demand like “Metal Health,” which local fans know well from it’s inclusion in the soundtrack at Pittsburgh Steelers games.  Check out the full interview from 91.7 FM WNJR below: 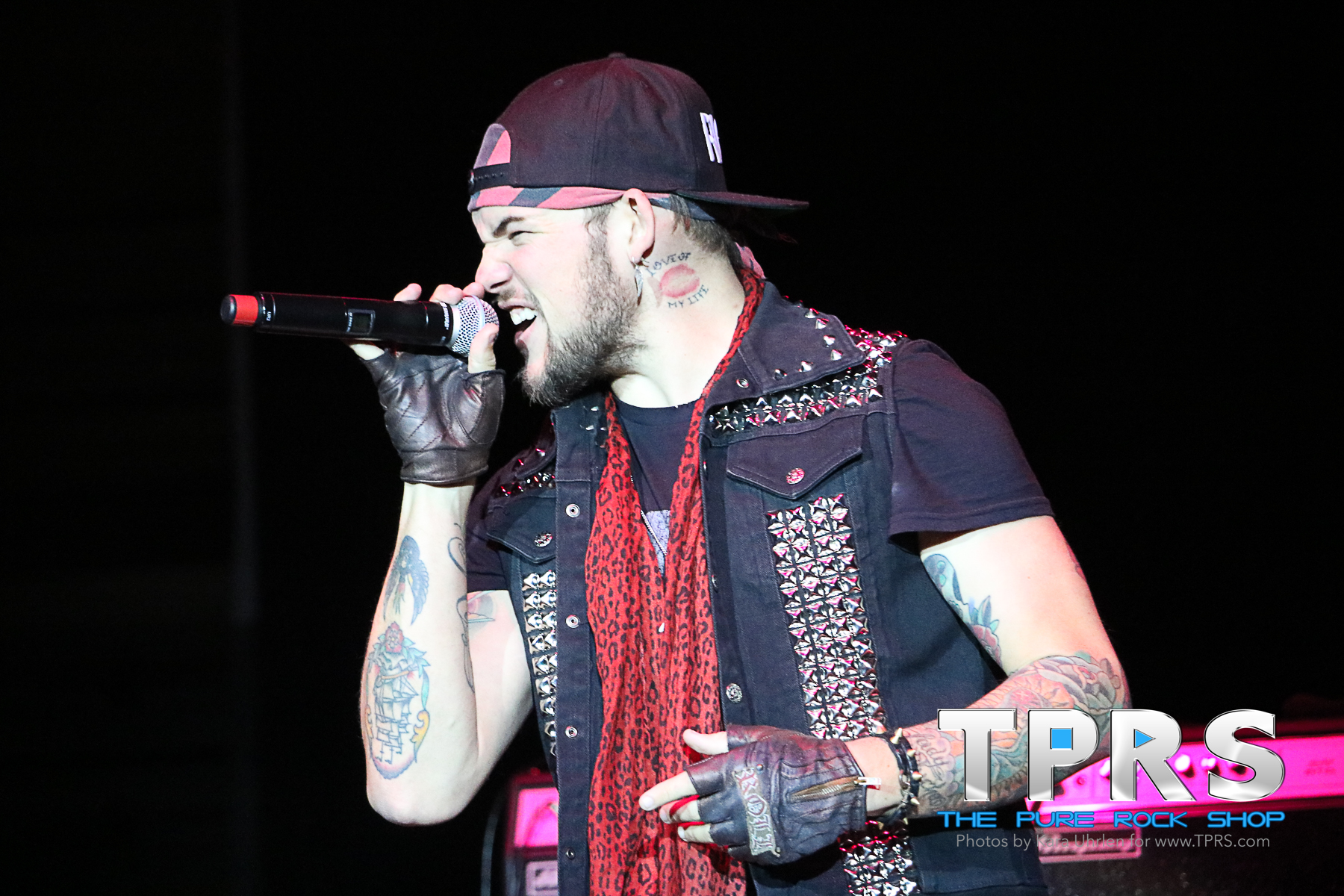 On whether the band feels any “pressure” to have their newer material measure up to their well-known hits:

Frankie: “Not really. The thing about QUIET RIOT is every single record we’ve done, people look at the obvious things that we did — ‘Cum On Feel The Noize’, and then we did another SLADE song, ‘Mama Weer All Crazee Now’, on the second record. Every single record we’ve done has been a progression, and we’ve done material that was similar to what had happened previously, but also different to what we had done before. I don’t feel that pressure at all. Any band should be blessed to have the anthems that we’ve had in our career, so I don’t think I’m worried about not having another one.”

On the set list the band performed during their recently-released live album/DVD, “One Night In Milan”:

Frankie: “Traditionally, QUIET RIOT, any time we’ve released a new record, we’ve always added one to two new songs into the set list. It’s rare that we add more than that, because as the years have gone by, we have so many songs that the fans expect us to play that it makes it difficult to decide which ones to cut out and which ones to leave in. The set that I put together for ‘One Night In Milan’, I wanted to make sure that we did as many of the songs that the die-hard fans that are longtime supporters wanted to hear, but I also wanted to bring us a step into the present by recording ‘Freak Flag’ and ‘Can’t Get Enough’, but [I] also went deep with a track like ‘Whatever It Takes’ from the 1995 ‘Down To The Bone’ record and [the] title track from the 1993 ‘Terrified’record. I wanted to give the fans a much broader stroke to the music of QUIET RIOTover the years.”

On deciding to release a live album:

Frankie: “My condition with agreeing to record a live album was that I was not going to let the label ask me to go into the studio and fix anything. What you hear there is exactly what we played that night. There’s no fixed guitar solos; there’s no fixed lead vocals; there’s no added background vocals with a bunch of people that didn’t sing [live]. Nothing is fixed — everything was as it was, and it’s as raw as a live performance should be… It is a very honest record of what QUIET RIOT sounded [like] on that particular night.”

Frankie: “I think the most important thing about having James come on board with QUIET RIOT is that the most difficult thing for us [was] trying to find a singer that had the vocal range that Kevin [DuBrow] did, because Kevin‘s vocal range was ridiculous. He could hit the highest of high notes and the lowest of low notes, but the other thing about Kevin is he was a real ham, and I mean that with love and respect. He really loved being on that stage. That was where he was having the most fun of his life. James has the vocal range and capability to do justice to the older QUIET RIOT material, but he’s also a great performer, so it gives us an advantage that we haven’t had since we lost Kevin in 2007. Plus, he’s a really nice guy. It’s a lot of fun and we all get along, and he’s considerably younger than the rest of us, so he has that more youthful innocence and point of view, which is refreshing. At the same time, we’re schooling him with over three decades of what it’s all about.”

Frankie: “I’ve been with the band since 1980, so I have spent most of my career — and most of my adult life — in this thing… It’s just such a huge and important part of my life that it is impossible for me to separate Frankie Banali from QUIET RIOT. The most difficult thing to do was to decide to continue after losing my best friend. I didn’t just lose a band[mate] — I lost a guy that I talked to every single day of my life, 20-30 times a day. But I felt that it was important, for me personally, to continue even without Kevin, irregardless of the amount of criticism that I received for doing so. I believe I made the right decision then, and I still believe it today. I don’t regret it at all. The only thing I regret is the loss of Kevin.”

On seeing younger fans sing along in concert:

Frankie: “There’s nothing more gratifying than that. I have the best seat in the house. I’m sitting on the drum riser, so I’m above eye level, and I’m looking at everybody in the audience. It’s great to see fans that are so young that they weren’t even born when most of these records were released. To see them out there, and they actually know the words to the songs, and they’re punching their fists in the air and they’re banging their heads… there’s no greater reward than that. It makes you feel like you’re not stuck in some time warp — that you’re actually part of the past, but also very much a part of the present.”

“One Night In Milan” — recorded at the 2018 edition of the Frontiers Rock Festival— was released on January 25 via Frontiers Music Srl. The 15-track release includes two songs from the group’s latest studio album (and first with Durbin), “Road Rage”, which was released in 2017.

Durbin, who became known as the “metal guy” on 2011’s season of “American Idol”after performing “Living After Midnight” and “Breaking The Law” with JUDAS PRIEST, hooked up with QUIET RIOT after the dismissal of Seann Nicols (a.k.a. Sheldon Tarsha; formerly of ADLER’S APPETITE). Nicols was with QUIET RIOT for just a few months, but long enough to record the vocals for an early version of “Road Rage”.

In addition to Banali and Durbin, QUIET RIOT‘s current lineup includes bassist Chuck Wright (who has been in and out of the group since 1982) and guitarist Alex Grossi.

Wondering what former Quiet Riot frontman Jizzy Pearl is up to, check out our interview regarding his solo album here.

Catch radio interviews and pure rock programming, including new music from Quiet Riot and more on 91.7 FM WNJR Washington / Pittsburgh and online at WNJR.org daily from 3pm EST – Midnight.  Follow us @ThePureRockShop for coverage from the local Quiet Riot show at Jergel’s on February 1st.