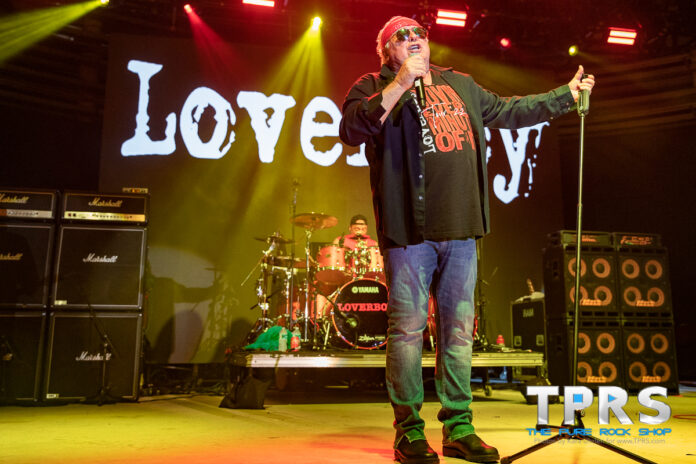 Those patrons who purchased VIP tickets were treated to an afternoon performance by Enuff Z’ Nuff featuring Beatles’ favorites from the band’s Hardrock Nite album, which was so popular at the festival that it sold out the previous evening where they kicked off Rokisland Festival’s preparty on Sunset Green Lawn in New Town along with Jetboy and Pretty Boy Floyd.

The band’s set focused on songs from The Beatles and solo hits from members of The Beatles like Paul McCartney’s “Jet.”  Favorites included their classic rendition of “Magical Mystery Tour,” which opened the set, as well as other favorites like “Helter Skelter,” which I first recall hearing covered by Motley Crue back in the 80s. As always, Chip shared stories with the crowd, which filled a small theater from the 1800s called the San Carlos Institute on the main drag of Old Town, Duval.

For more stories and information on the album, you can listen in to our full interview with Chip from when it was first released. 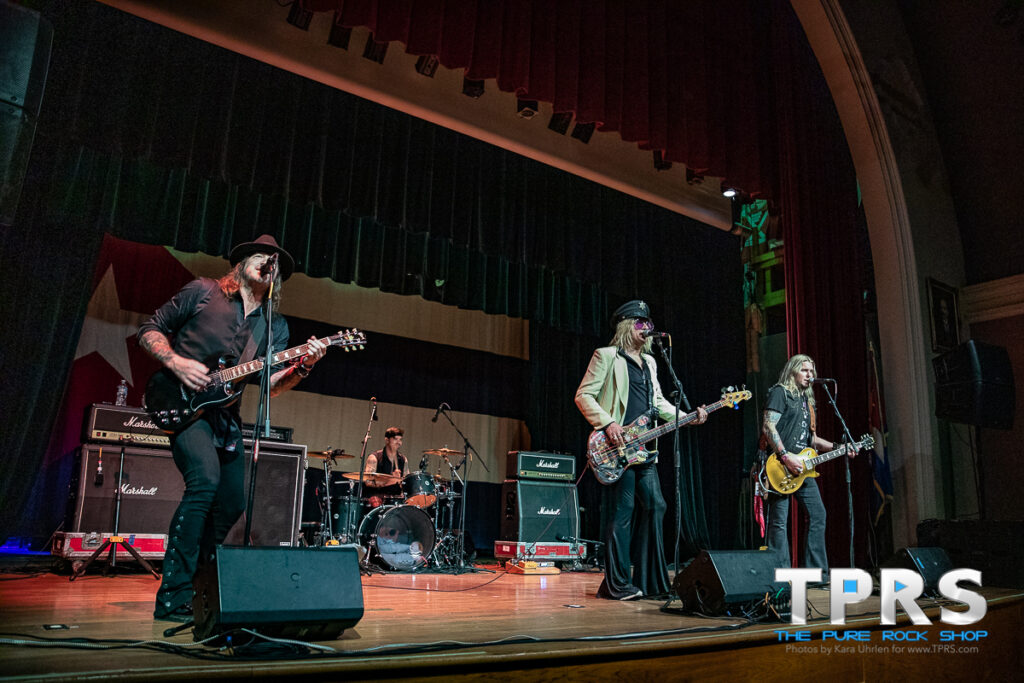 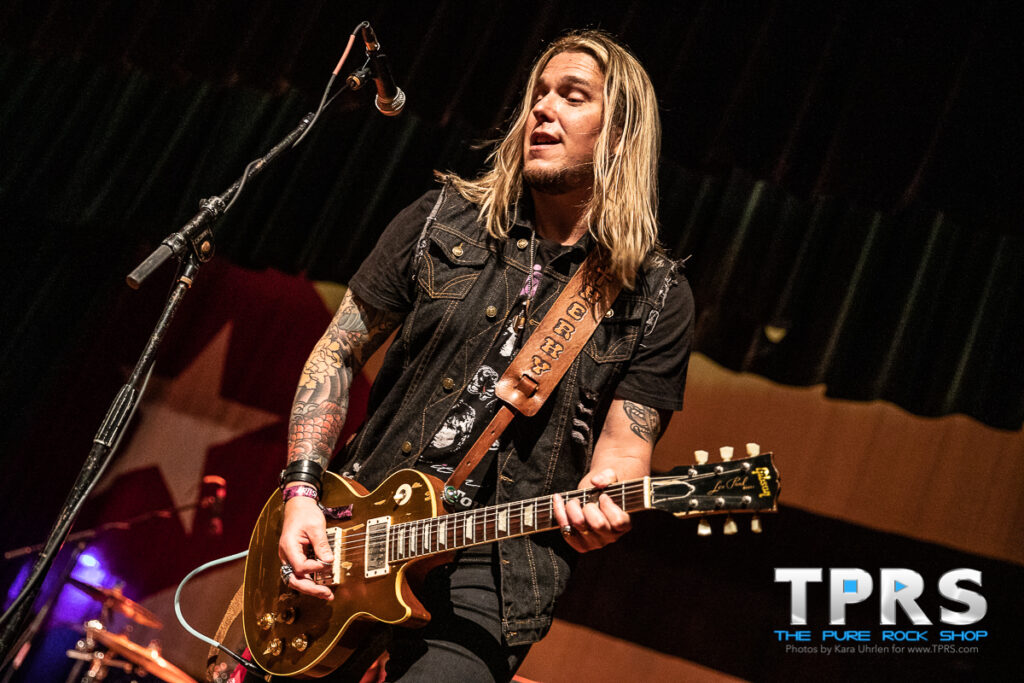 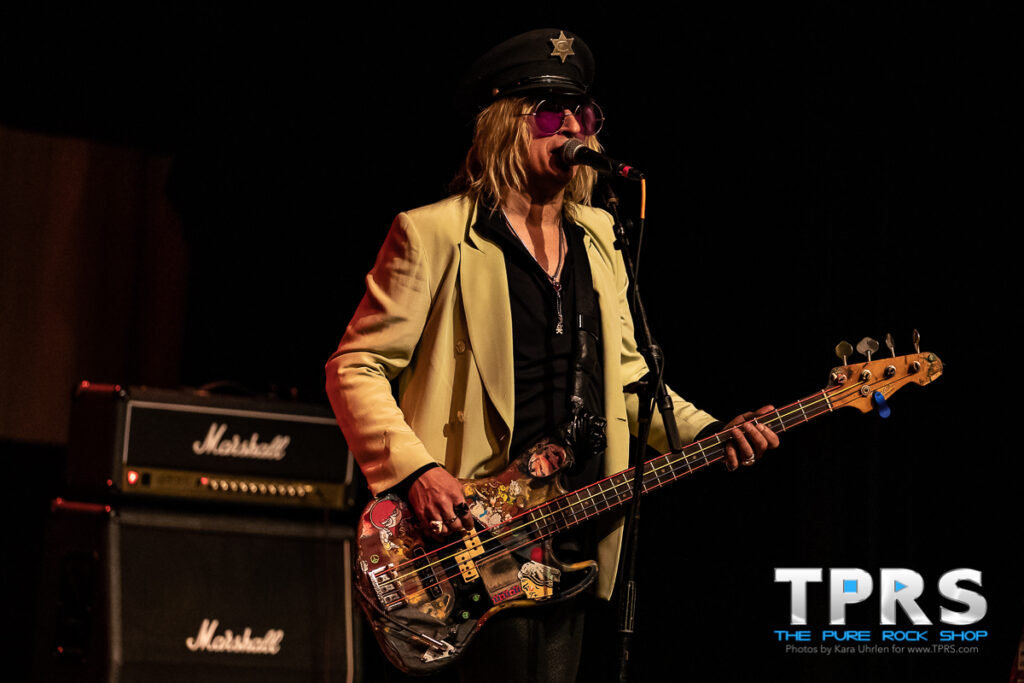 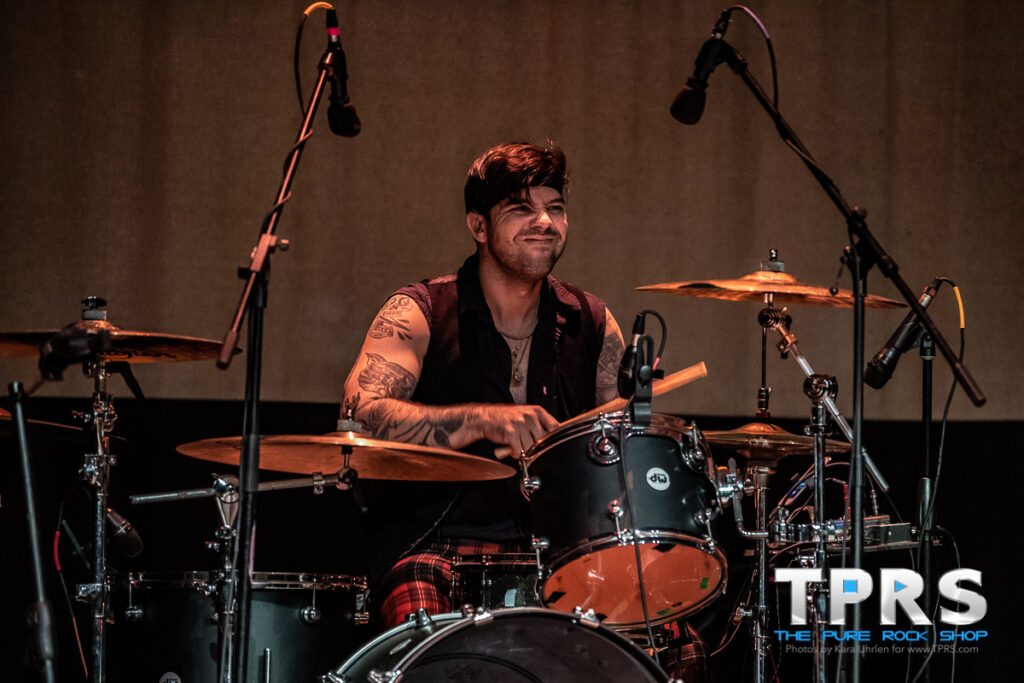 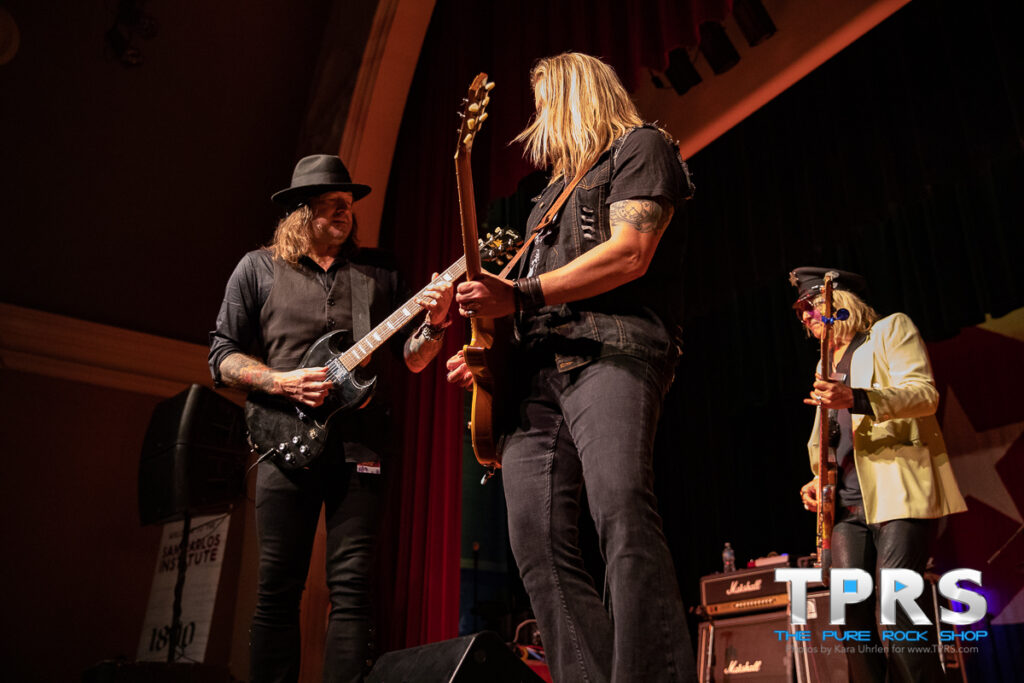 In the meantime, the party was also going strong at Smokin’ Tuna just down the street where That Arena Rock Show could be found doing a scaled-back version of their typical costumed stage show and delivering cover tunes from the era.

The band hails from Ohio and features T-Bone on vocals, Tracii Page on Lead guitar/vocals, Nikki Starr on Rhythm guitar/vocals, Brady Savage on Bass/vocals, and Ryan Rockett on drums. They tour regularly and have a local show coming up at Jergels on May 12th for anyone looking to check them out. 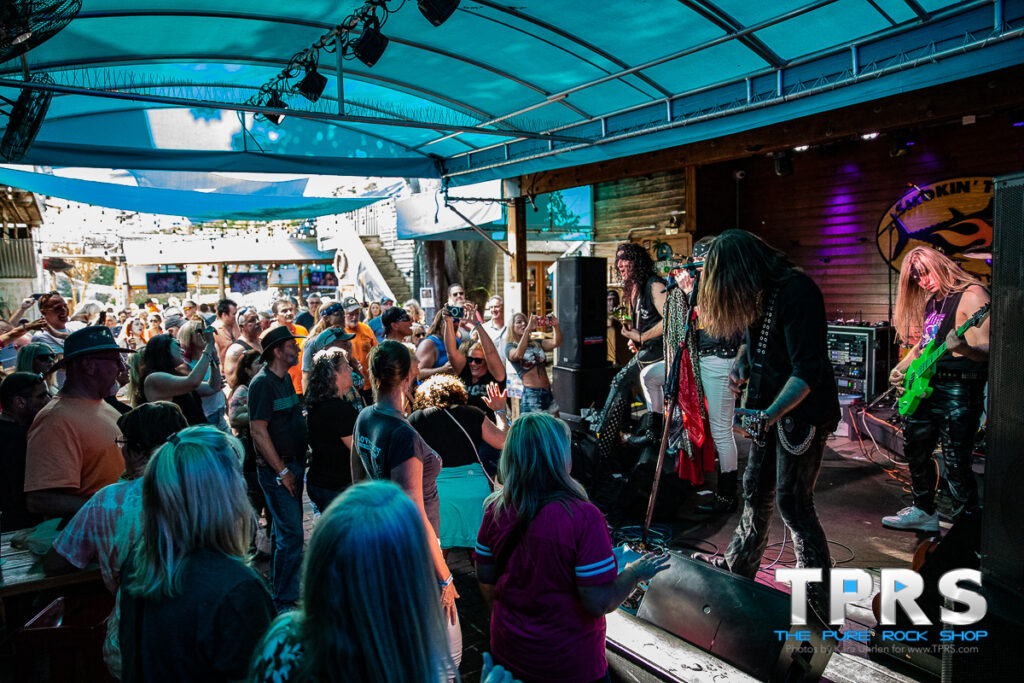 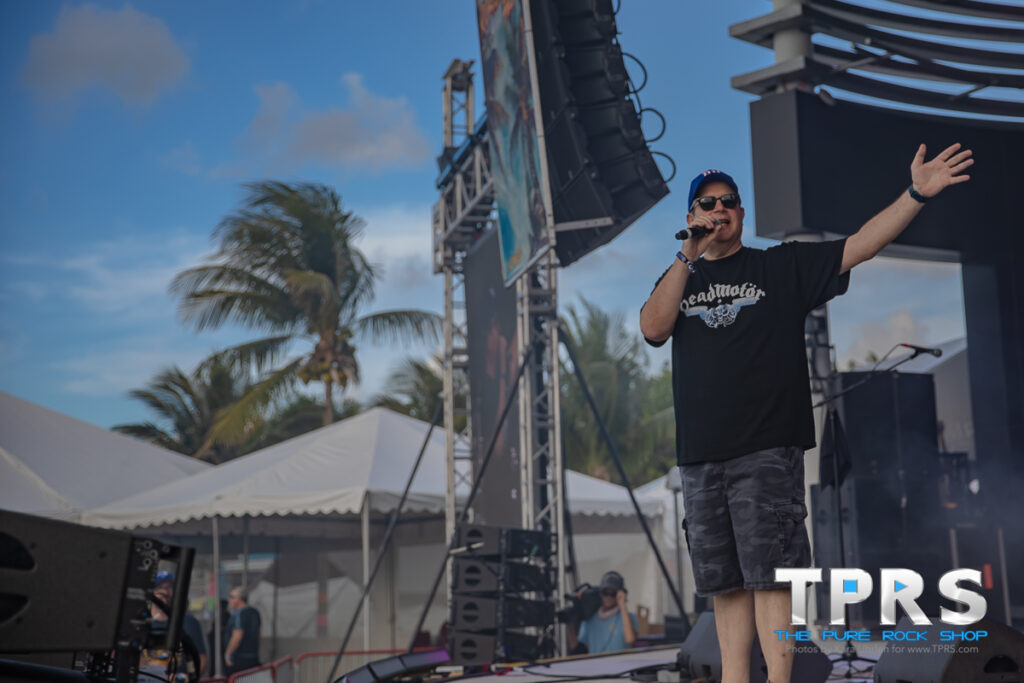 Following an introduction by festival host Eddie Trunk from Sirius XM, Helix opened up the show at Key West Amphitheater in the island’s Truman Waterfront Park the first official day of the festival, which was informally known as ‘Canada day’ given that Helix, Honeymoon Suite, and Loverboy all hail from Canada and that both Alistair James and Todd Kerns (Slash, Toque) from Steven Adler’s band are Canadians as well.

Helix’s current lineup includes founding member Brian Vollmer alongside drummer Greg “Fritz” Hinz, bassist Daryl Gray, and guitarists Chris Julke and Mark Chichken. Mark joins the band after they had initially performed post-pandemic with Killer Dwarfs guitarist Gerry Finn in replacement of Gary Borden. Gerry tells us that he and Mark had originally both performed together with Helix briefly in the 90s.

Brian Vollmer, the only remaining original member of the Canadian hard rock group Helix brought energy and color to the stage as did his bandmates who made it their priority to pose for the cameras and engage with the fans as they tore through favorites like their 1984 hit “Rock You” from the album Walkin’ the Razor’s Edge and “Gimme Gimme Good Love,” before winding down the set with a heartfelt dedication of their “Heavy Metal Love” to Eddie Trunk. 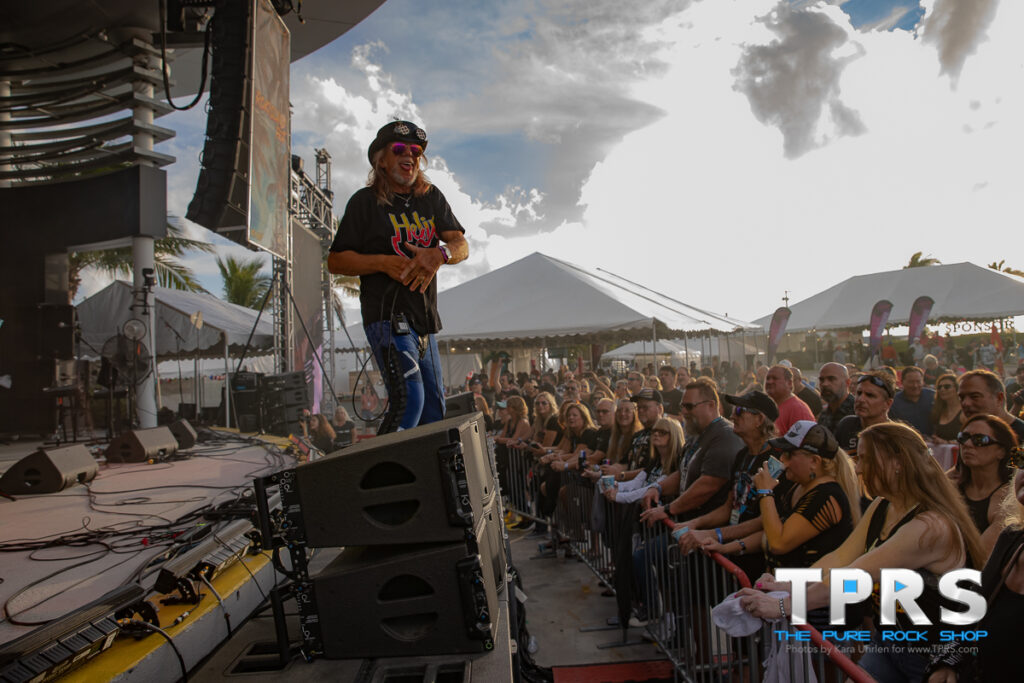 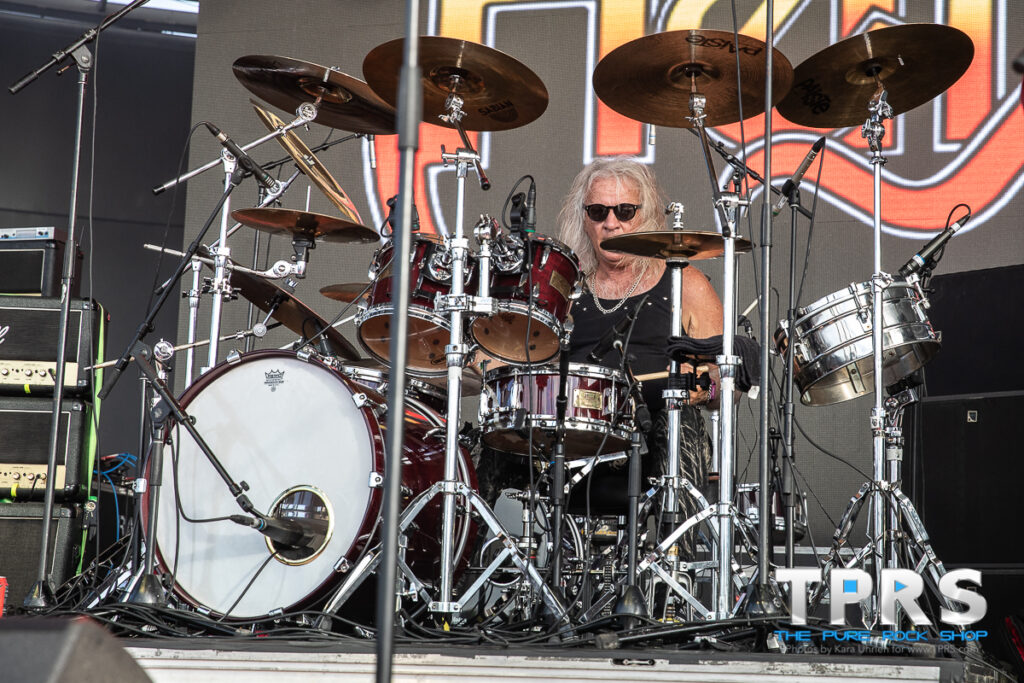 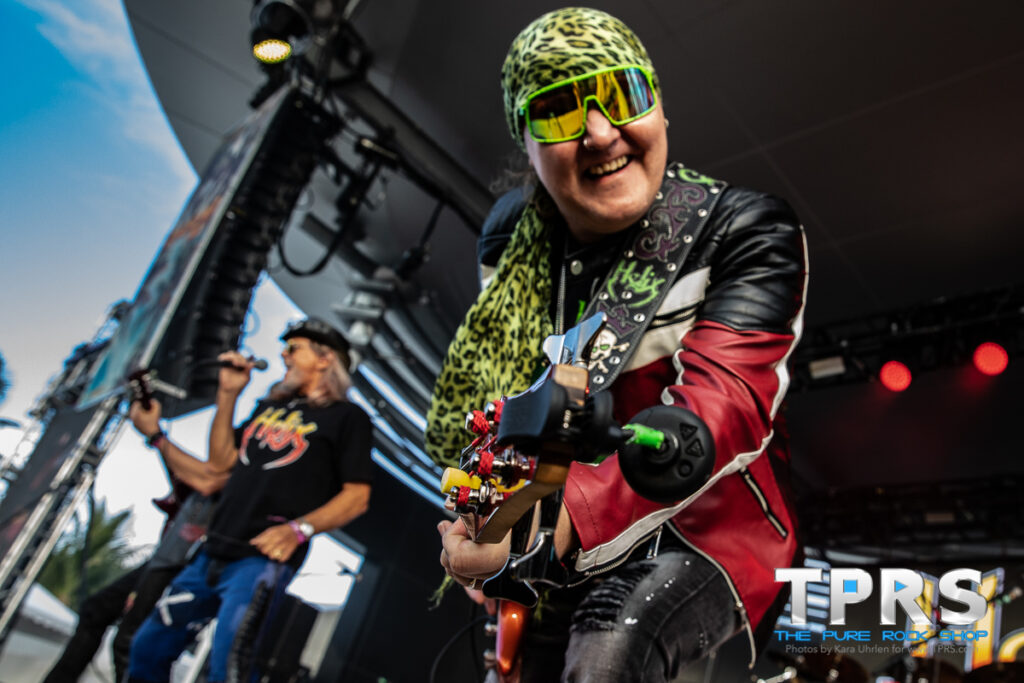 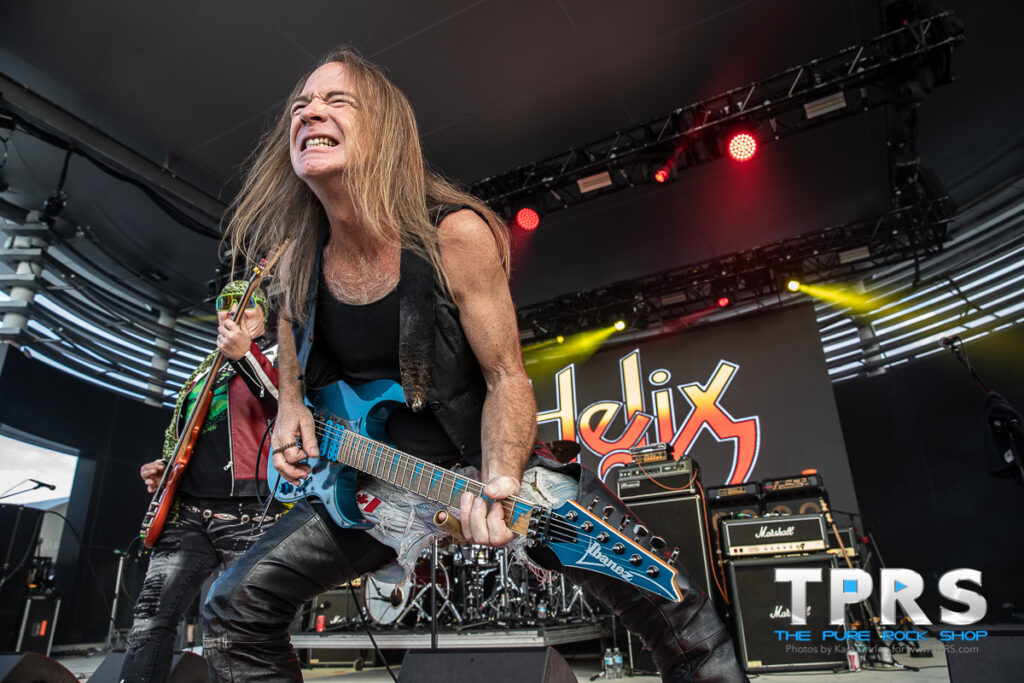 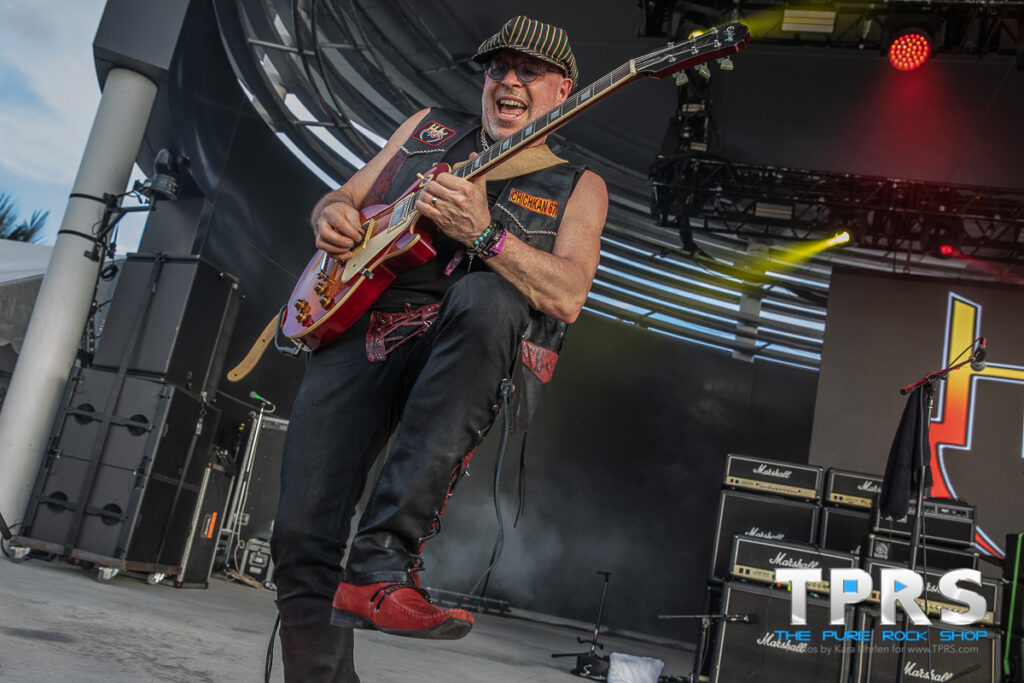 I’d been listening to Honeymoon Suite a lot prior to their performance on the Monsters of Rock Cruise, but wasn’t able to fit them into my schedule that year.  I just love their hits like “New Girl Now,” and that distinct guitar lick from the song “Burning in Love” on their 1984 self-titled album, which somehow made it onto my iPhone play list a few decades later.

Beyond that I wasn’t all that familiar with these multi-platinum recording artists given the year that they hit.  But it was pretty awesome to see the reunited classic line-up of Johnnie Dee on vocals, Derry Grehan on guitar, Gary Lalonde on bass, Peter Nunn on keyboards, and Dave Betts on drums four decades later in Key West of all places!

A big thanks to the band’s management and to Gary Lalonde for chatting with me about the band’s line-up, and for the direction of my friend Todd Kern’s, who I knew couldn’t steer me wrong with the scoop on these Canadian bands, given that his band Toque covered hits from all these great act’s this past summer at Monsters on the Mountain. 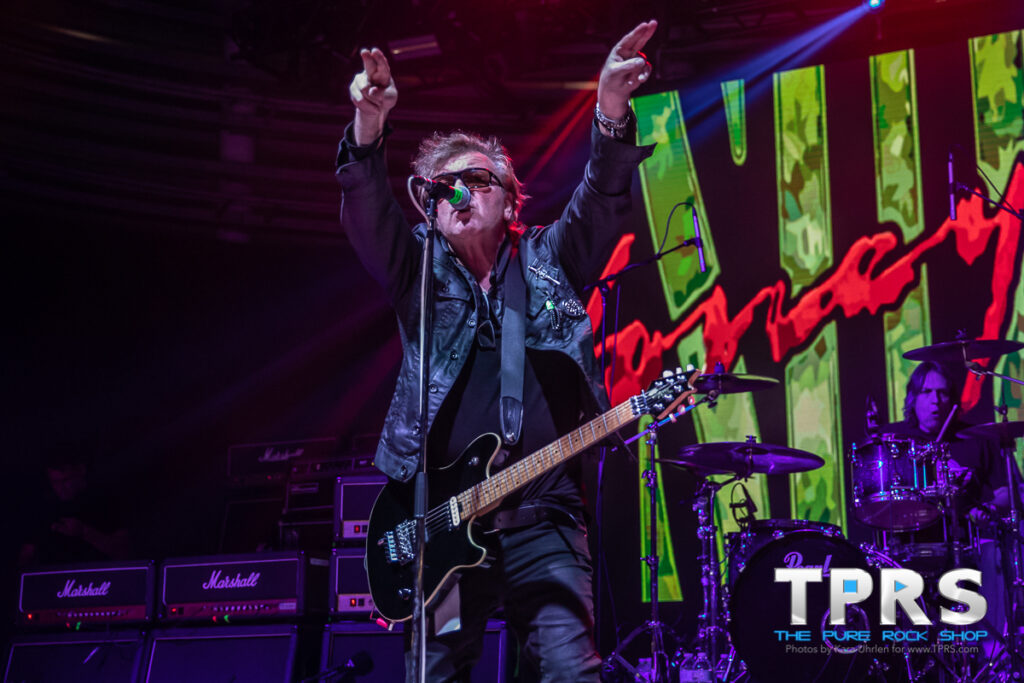 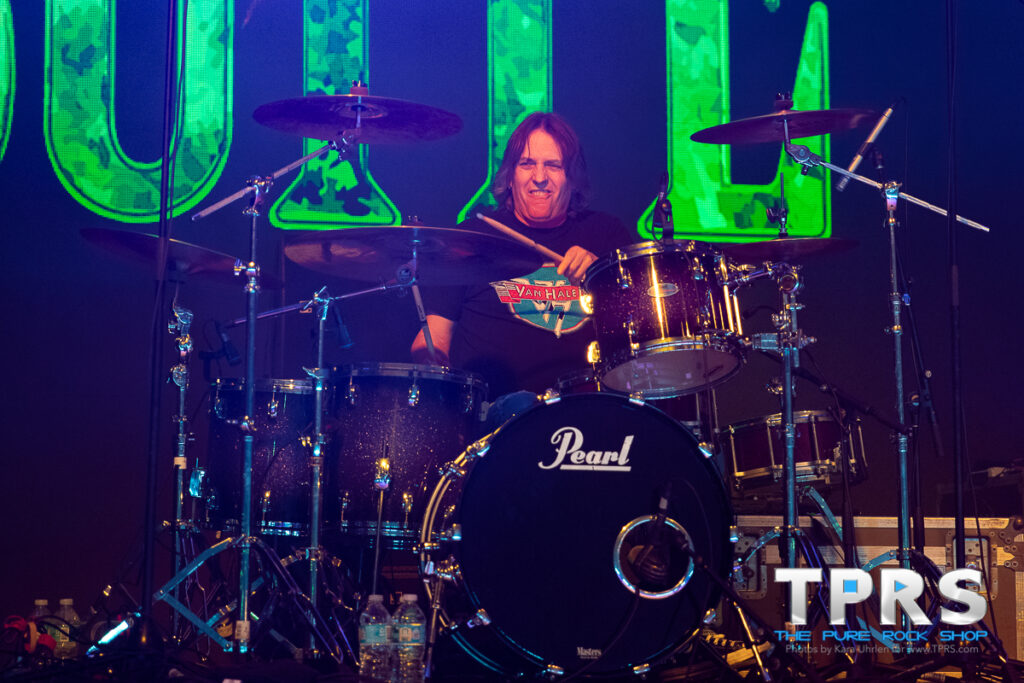 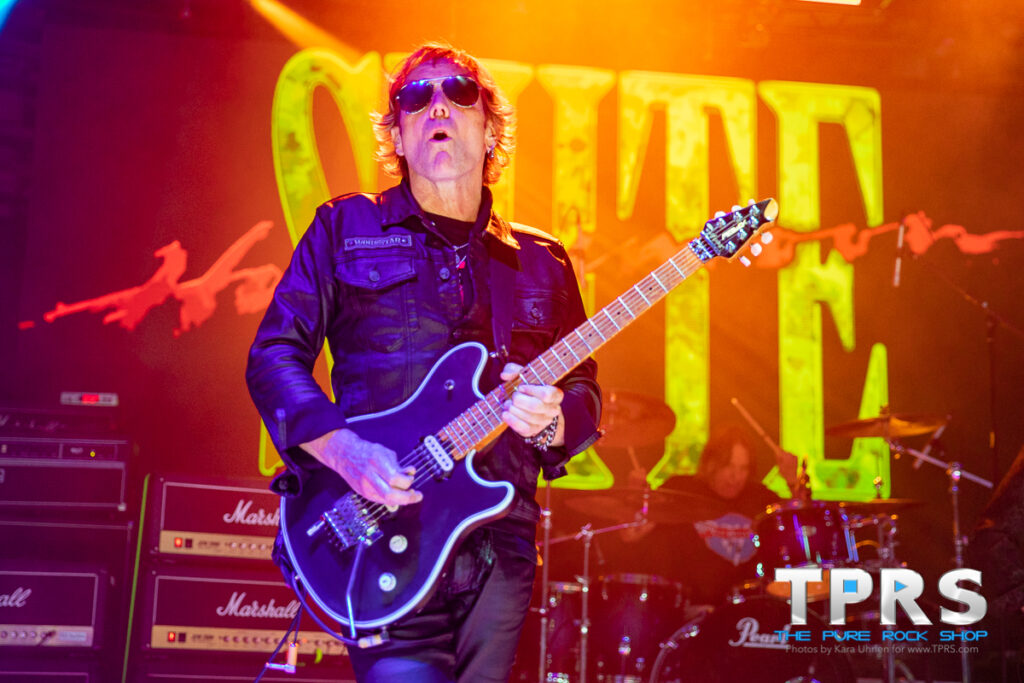 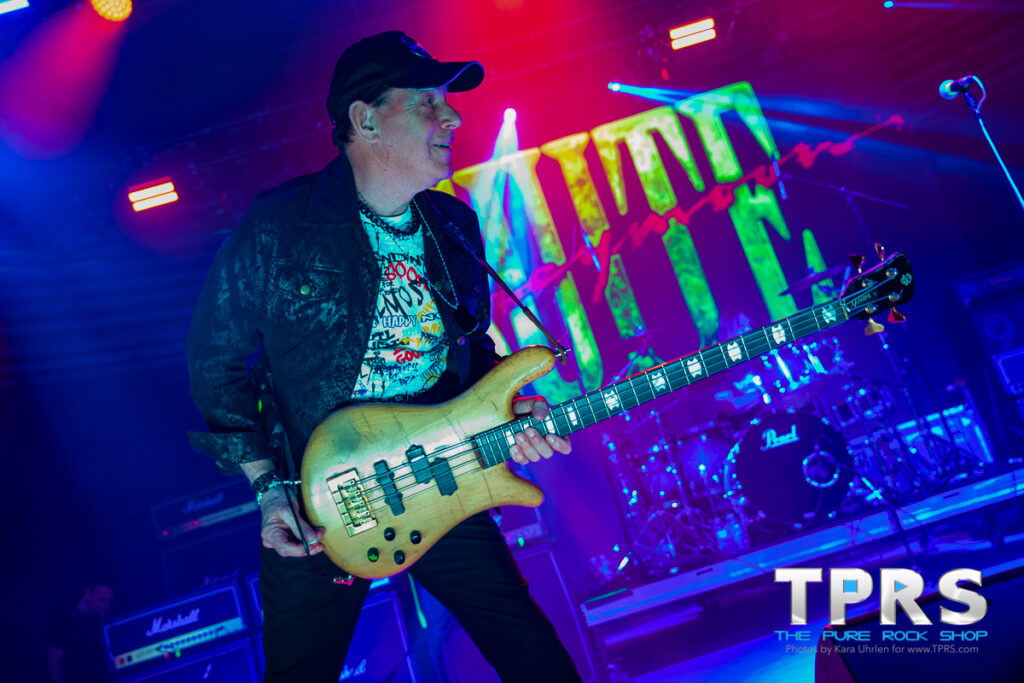 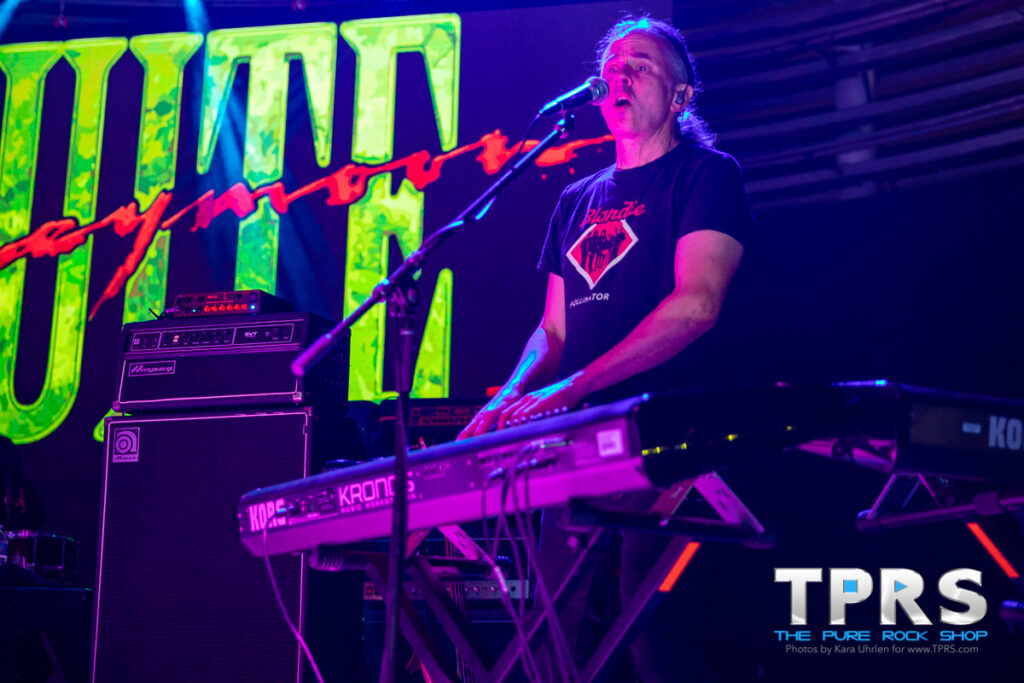 Steven Adler got the audience warmed with with Queen’s “We Will Rock You” echoing through the festival grounds as his manager creatively painted a picture of spilled beer and invited us to travel back to the era of Guns ‘n Roses Appetite for Destruction album.

The original drummer of Guns ‘n Roses was joined by guitarists Alistair James and Michael Thomas, frontman Ari Kamin, and Slash’s bassist Todd Kerns (who says he is still not actually in the band). However, they have been using him and bassist Cristian Sturba from Argentina in replacement for Tanya O’Callaghan, who joined Whitesnake last year.

I’ve seen this band many times, and they never disappoint.  One would never know that frontman Ari Kamin is not a native English speaker as his Argentinian accent rarely peeks through in his vocal delivery.  His energy reminds of a young Axl Rose, but only better.  And I must give props to this guy who was still going strong as Rick’s on Duval closed at 4 am with encore performances for his friends and fans that left the local karaoke crowd simply flabbergasted.

It was hard to believe that the band hadn’t played in months or that Steven Adler was fighting an illness that evening that left him forced to cancel a show later that week. From “Night Train” to “Welcome to the Jungle,” the energy was off the charts and we look forward to catching up with the band again at M3 Rock Festival. 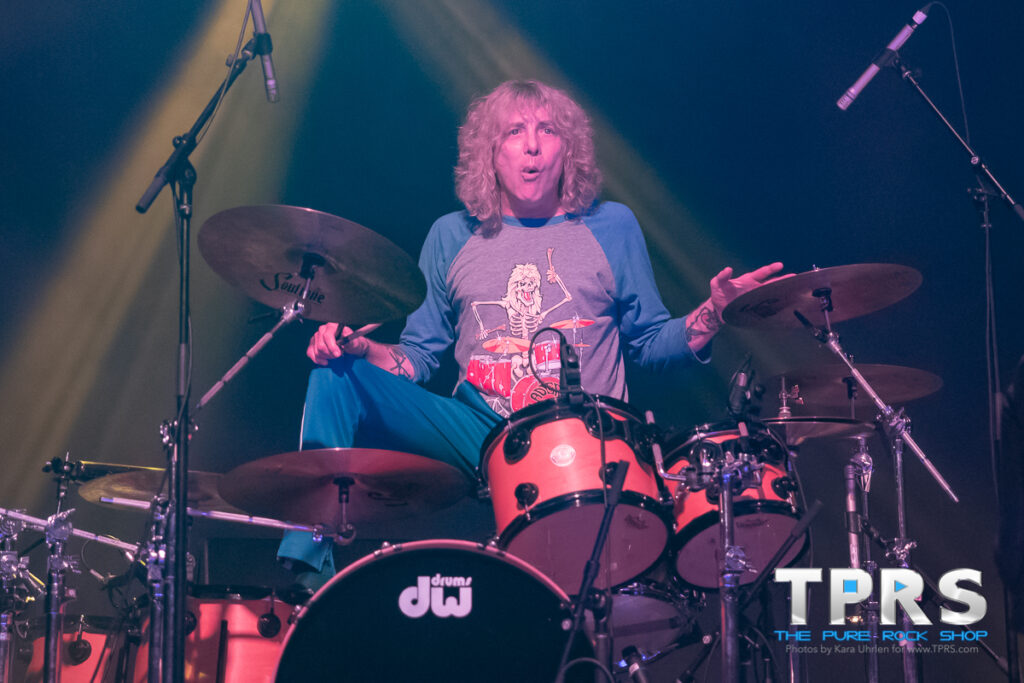 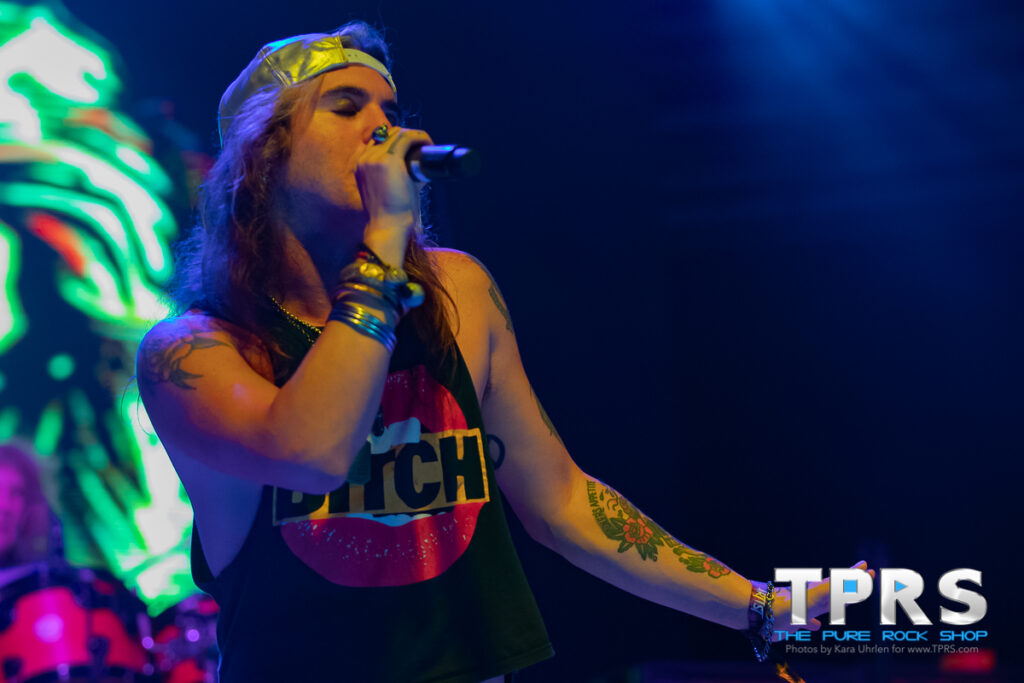 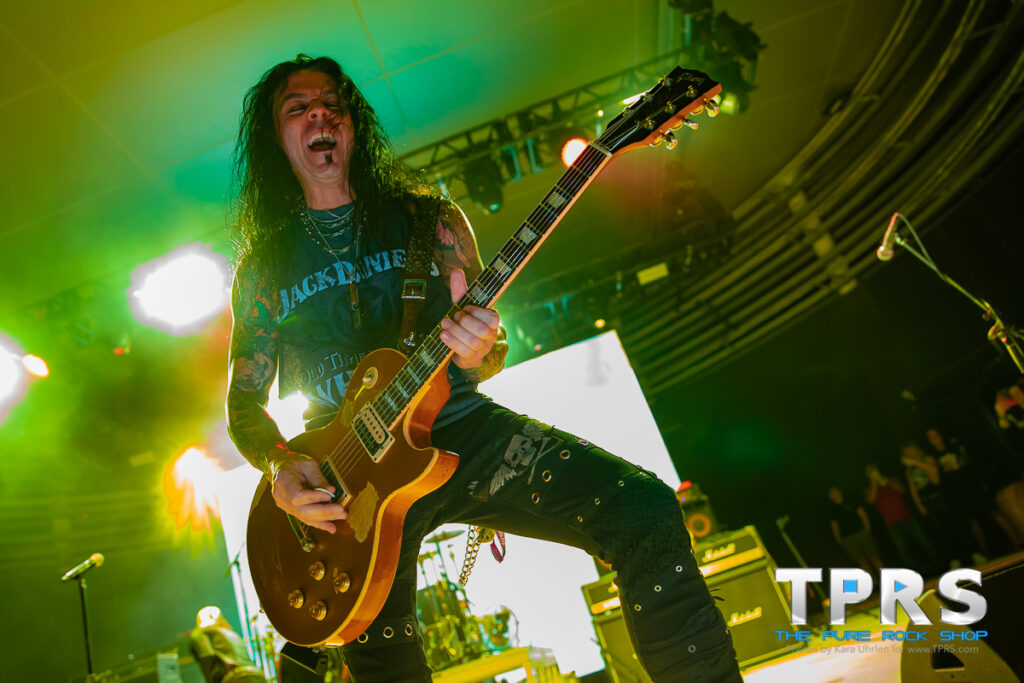 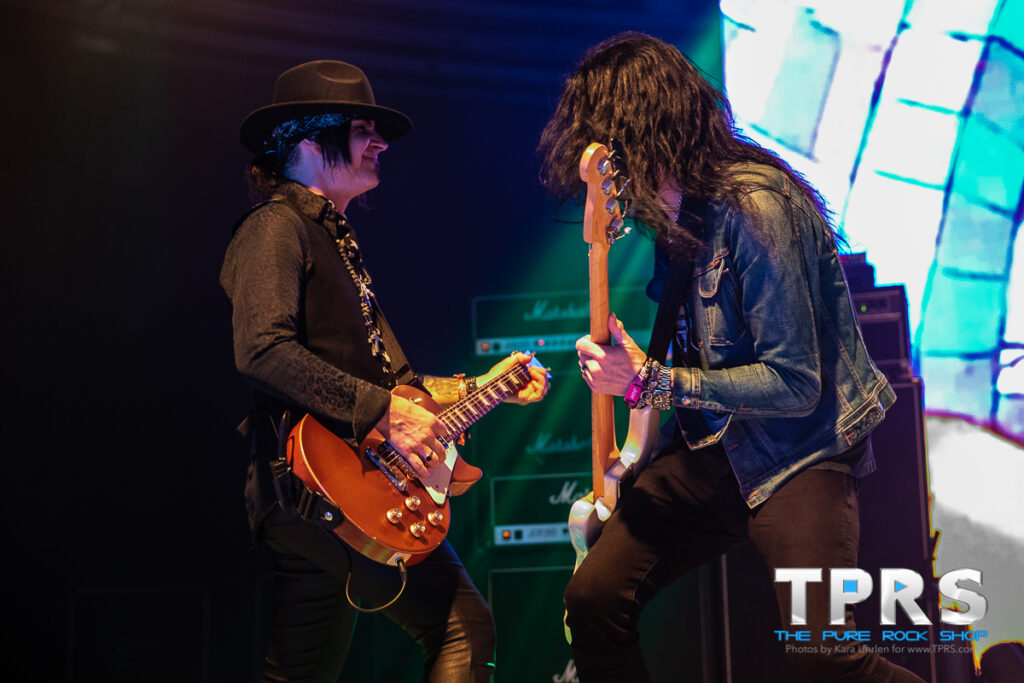 Loverboy headlined the festival on Wednesday night, and was one of the most anticipated acts as they were originally slated for the inaugural festival in 2022 and later replaced by Cheap Trick. But they made it up to fans with a 2023 performance.

The current line-up consists of original members Mike Reno on lead vocals, guitarist Paul Dean, drummer Matt Frenette, and keyboardist Doug Johnson.  They are joined by bassist Ken “Spider” Sinnaeve (Tom Cochrane, The Guess Who) who fills the void left by founding member Scott Smith who had died tragically in a boating accident in 2000.

Frontman Mike Reno’s shirt says it all, as fans were “Lovin’ Every Minute of it”! What a show, packed with favorites like “Working for the Weekend,” “Hot Girls in Love,” and of course “Turn Me Loose.”

Given that we call Pittsburgh home, you can typically find us cheering against Canada when the Penguins are on the ice, but on Rokisland, we were cheering for them to the point that my voice was hoarse the following morning…afterall, the festival had ended but the night had just begin… 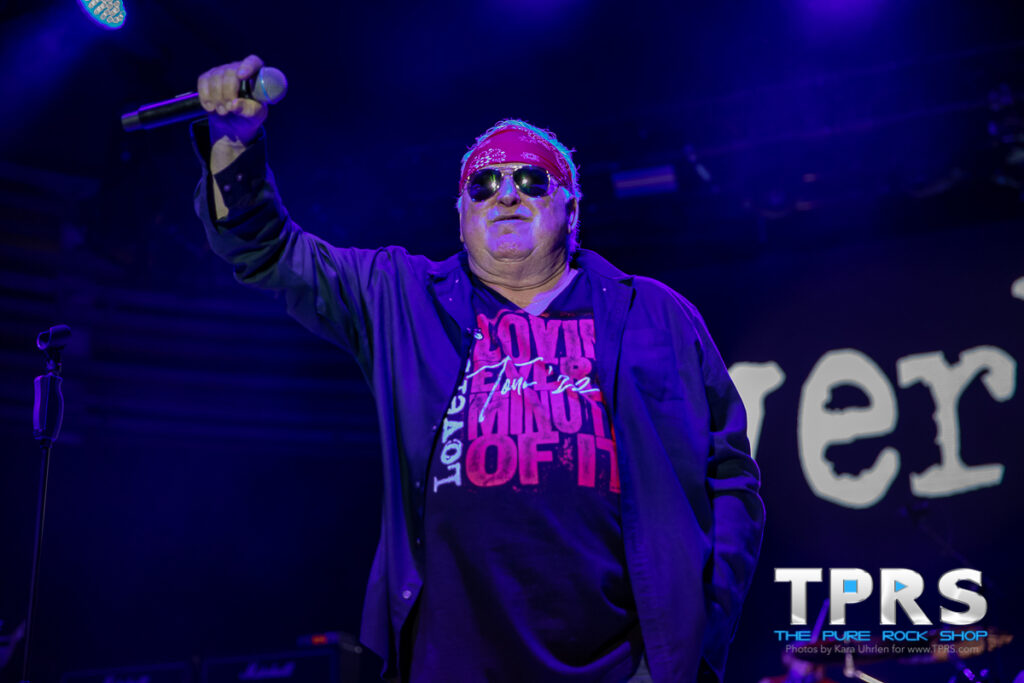 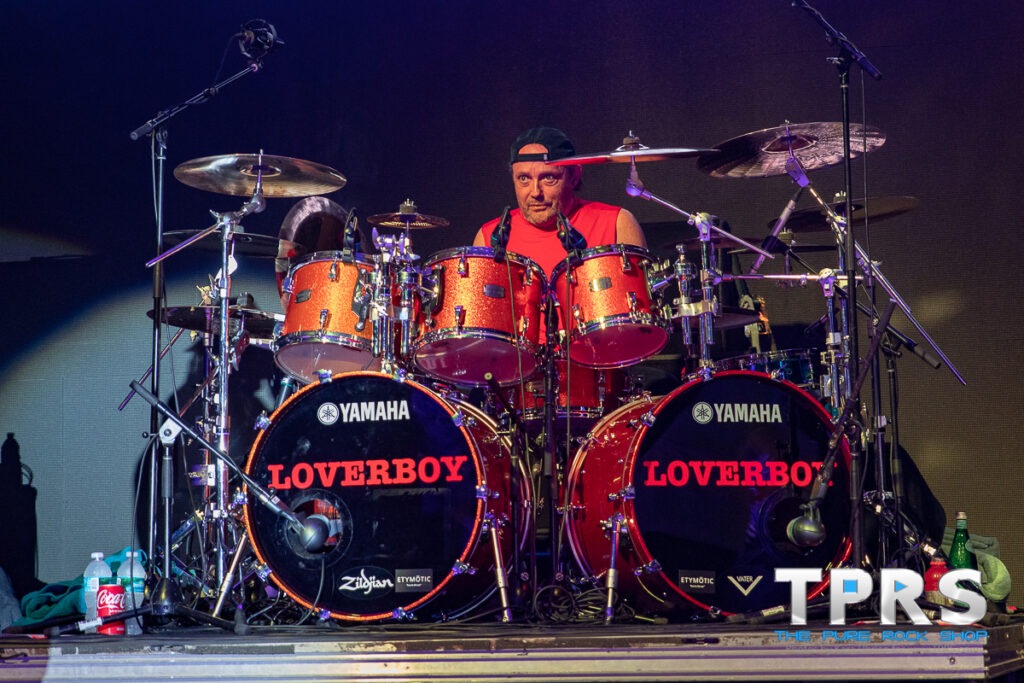 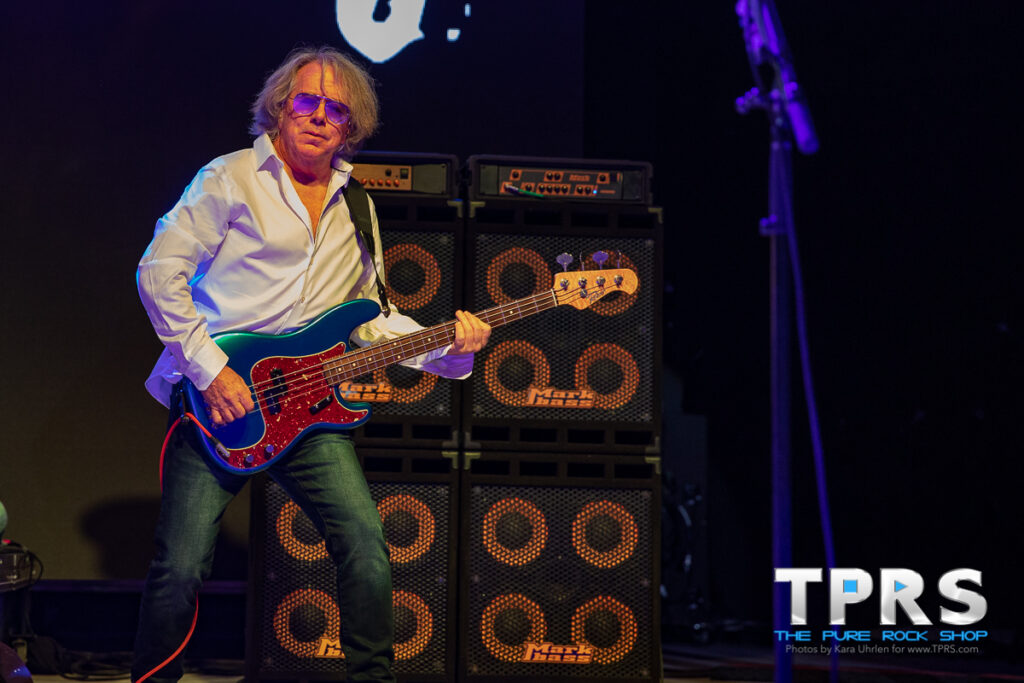 The evening continued with an afterparty at Smokin’ Tuna where the day began for many, and we were hosted by Marq Torien and his current Bulletboys line-up featuring Brad Lang (Burning Rain) on bass, Fred Aching (Powerflo, Kings of Thrash) on drums, and the man with the best hair in metal, Ira Black (Metal Church, Lizzy Borden) on guitar.

Performing from 11pm – 12:30 am, that left plenty of room for fun on Duval, where some venues are open until 4 or 5am.  So we gathered up some friends and started our own bar crawl which included stops at Sloppy Joe’s and Rick’s karaoke (as noted earlier), where vocalists Ari Kamin (Steven Adler), Frank Pupillo (Shot of Poison), Jimmie Romero (Jetboy), and Ronell Rimes (Rag Doll Band) took over the stage. 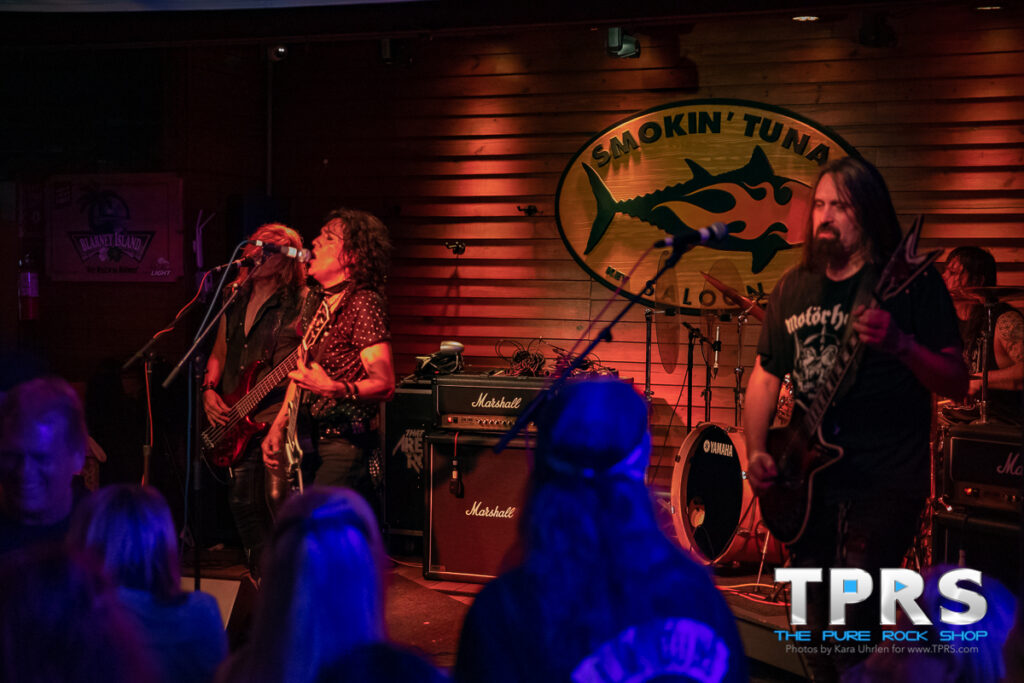 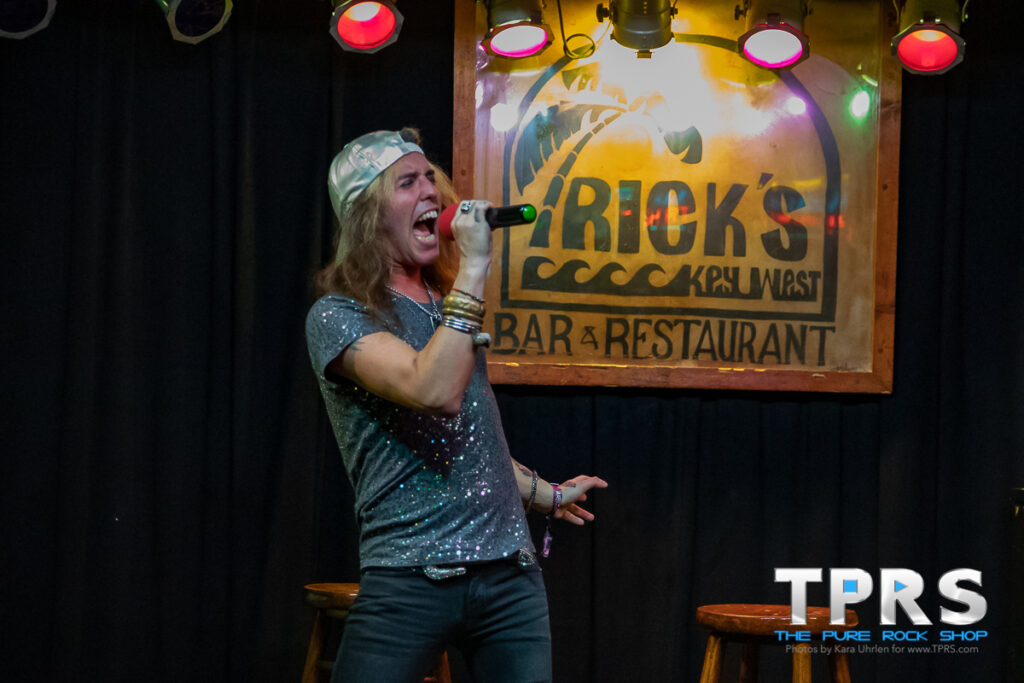 Check out our preparty coverage here and be sure to stop back soon for more event recaps from Thursday, Friday and Saturday performances at Rokisland Festival.

Follow us @ThePureRockShop for more local concerts including Kings of Thrash, Enuff Z’ Nuff, Queensryche, Ugly Kid Joe, Riki Rachtman, The Winery Dogs, and That Arena Rock Show, as well as festival coverage in 2023 including more from the Rokisland Festival in Key West, Monsters of Rock Cruise, M3 Rock Festival and more.