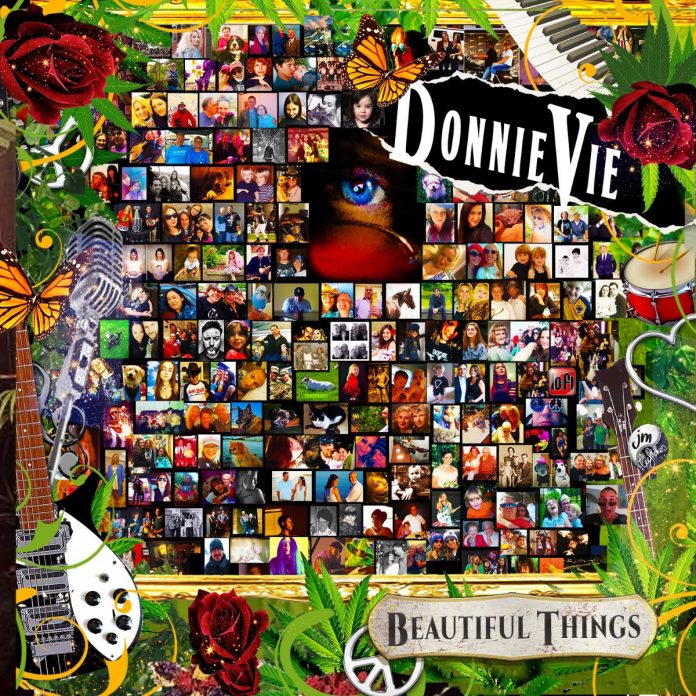 There are limited edition LP/CD bundles (while supplies last), which can be ordered online.

The latest single “Beautiful Things” is out now and this is what Donnie had to say about the song and new video here.

“When I wrote Beautiful Things I envisioned something within the lines of the old Willy Wonka land. Just a potpourri of wonderful delicious flavored treats in a colorful setting. I’ve always been pretty dark so many of my songs were dark. This time around, though I still prefer nighttime, emotionally I feel sunny, and it reflects in the new songs. This song is the first step through a journey with this record. It sets the mood and is lyrically based on silver linings in all things. Paul Gilbert guest stars with amazing guitar.”

Donnie has been one of rock’s biggest secrets, who has been crafting melodic power pop and rock songs for over 30 years. He and Enuff Z’Nuff were instant critics’ darlings, with a debut record that soared up the charts generating two long playing MTV hits, “New Thing” and “Fly High Michelle.” A “Top Pick” from Rolling Stone Magazine, and inciting numerous TV and radio performances with repeat invitations from David Letterman and Howard Stern, the group released their “self-titled” and follow up ‘Strength’ on Atco Records, before being picked up by Clive Davis and signed to his Arista label for ‘Animals with Human Intelligence.’

The Grammy-nominated artist has amassed over 25 albums’ worth of songs and decades of live shows to his name, both with and without his former band. Now a solo act, Vie continues his songwriting and performing under his own name. Rolling Stone Magazine described Donnie’s writing skills as “Beatle-esque pop songcraft and ripping hard rock”

“After five years, DONNIE is back with a fresh and enjoyable album, made of great melodies and a lot of class. Worth the wait!” Metal-Temple

Donnie will also be playing ‘Beautiful Things’ in its entirety along with all the Enuff Z’Nuff hits January 4th in his native Chicago area at FitzGerald’s Night Club.