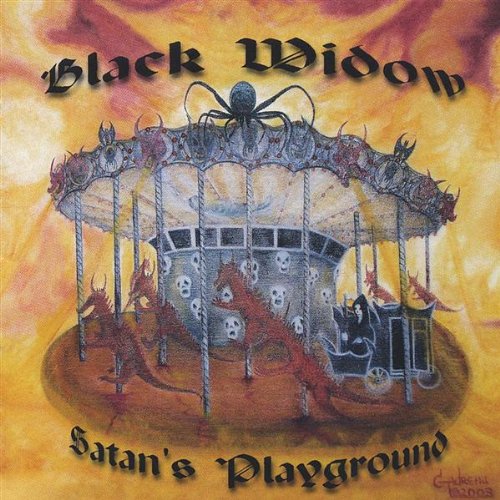 Based out of Maryland, Black Widow offers a traditional old school metal approach that is most appealing to these ears.  Lead singer Cat reminds me of three vocalists in particular Doro Pesch, Betsy Bitch and Mary Ann Scandiffio of Blacklace.

Cat has a cool, confident voice that never wavers or shows weakness, unlike many of her male counterparts.  Fans of bands such as Blacklace will absolutely love the approach Black Widow has taken throughout.  Epic tracks such as the title cut “Satan’s Playground” highlight Cat’s powerful vocals.  While she does not go into the upper ranges, her vocal confidence over the course of the disc works well with the music.

Musically, Black Widow is steeped in traditional metal featuring solid guitar riffs and precise solos provided by guitarist Johnny.  “The Unknown” reminds me of a band some of you may remember by the name of Avalanche.  The song features almost a military type delivery with its simplistic charge.  On “Night Chills” Johnny seems like his delivery is delving a bit into Ted Nugent territory on his more metal oriented releases.  Closing track “Heavy Metal Warrior” features over seven minutes of basic American metal that recalls a time when talent was king over studio tricks.  The production is rather stripped down throughout “Satan’s Playground” but this type of release does not need the Pro Tools treatment to over-sanitize the CD.  This honest approach provides for much more feel than many of the machine-aided Euro metal releases.