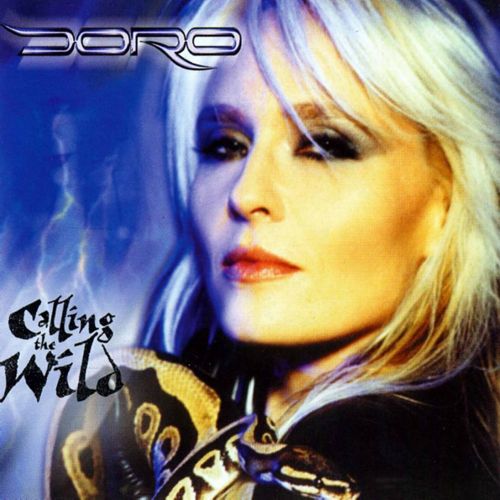 Doro Pesch’s (Warlock) first domestic release in about a decade features a talented lineup of heavy metal guests and the distinct vocals of Doro herself. The CD is full of strong compositions, powerful choruses but is not necessarily an album that immediately sticks in your head.

After about 4 plays, the “Calling The Wild…” begins to truly shine due to the diversity of songs on the release. ”I Give My Blood” finds Doro in a “True As Steel” era form highlighted by the lead guitar work of Al Pitrelli (Savatage, TSO, Megadeth). Another aggressive release early on the CD is “I Wanna Live” with Doro’s assertive screams of “Never Givin’ In” resonating throughout. Doro’s cover of Billy Idol’s “White Wedding” recalls the import release Machine II Machine release in style and sound.

”Kiss Me Like A Cobra” is the discs standout track with a seductive tone and an aura of dangerous desperation casting a spell over this mid-tempo composition. ”Love Me Forever” and “Alone Again” are powerful ballads featuring Lemmy from Motorhead sharing vocals with Doro. These song feature Eric Singer (Kiss, Alice Cooper) on drums and Bob Kulick (Balance, Skull, Darkthorne, Murderer’s Row) on guitars. The other 3 ballads on this release “Give Me A Reason” , “Scarred” and the beautiful “Constant Danger” definitely do not water down the release. Slash (Guns N Roses, Slash’s Snakepit) dawns the lead guitar top hat for “Now Or Never”, a rousing hard rocking track featuring Slash’s signature guitar sound. Finishing off the CD is the anthemetic “Burn It Up”, a short but relentless song.

Containing 14 tracks in all, “Calling The Wild…” is a powerfully diverse release that makes for a great return to the USA for Doro.