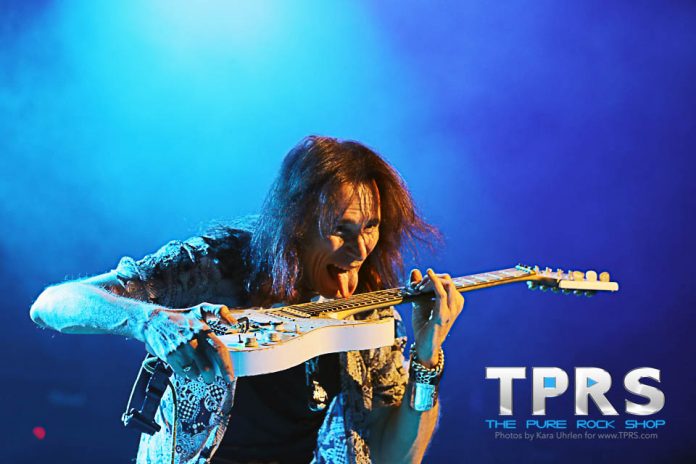 The Generation Axe tour came to The Palace Theater in Greensburg, PA on Monday, December 3rd, bringing together five of the most talent guitar players in the world of rock and metal on one stage.  The tour came to life through the vision of Steve Vai, who is clearly known for thinking outside the box. During our interview with Vai on 91.7 FM WNJR in Washington, PA, we learned that he had made a list of guitar players that he wanted to work with for this project and Tobin Abasi, Nuno Bettencourt, Zakk Wylde, and Yngwie Malmsteen topped his list.

It’s no surprise that they all came along for the ride that began with US and Asian tours back in 2016, but words simply can’t explain how amazing this ensemble is as it all comes together for several hours of guitar heaven…

The evening kicked off with a cover of “Hocus Pocus” by Focus, which was delivered by the full ensemble with backing band featuring Pete Griffin on bass, Nick Marinovich on keyboards, and JP Bouvet on drums who played on tirelessly through the individual sets of each guitarist. 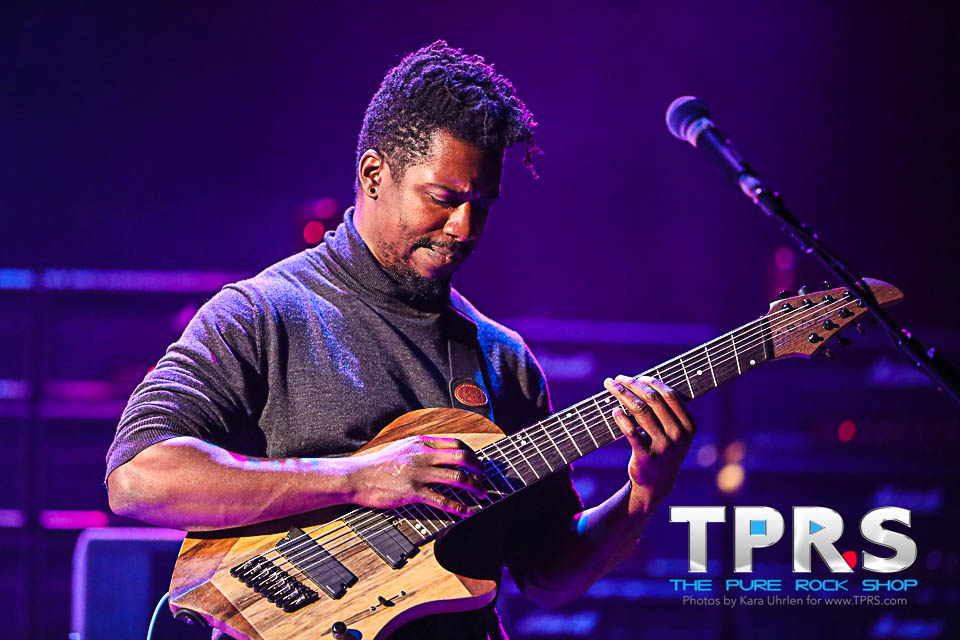 Tobin Abasi took the lead with a performance that was very accurately described by Steve Vai as “calculus” on guitar.  Abasi, who is best known for his progressive metal group Animals as Leaders, kept the crowd silent as they watched in amazement. He performed on his own 8-string guitar creations with what appeared to be minimal effort as he grinned from ear to ear.  Soon joined by Extreme’s Nuno Bettencourt, Abasi closed out his set with “Physical Education” from his band’s The Joy of Motion album before Bettencourt took the lead on vocals and guitar for “Get the Funk Out” from Extreme’s Pornograffitti album with bassist Pete Griffin joining him front and center for the fun. 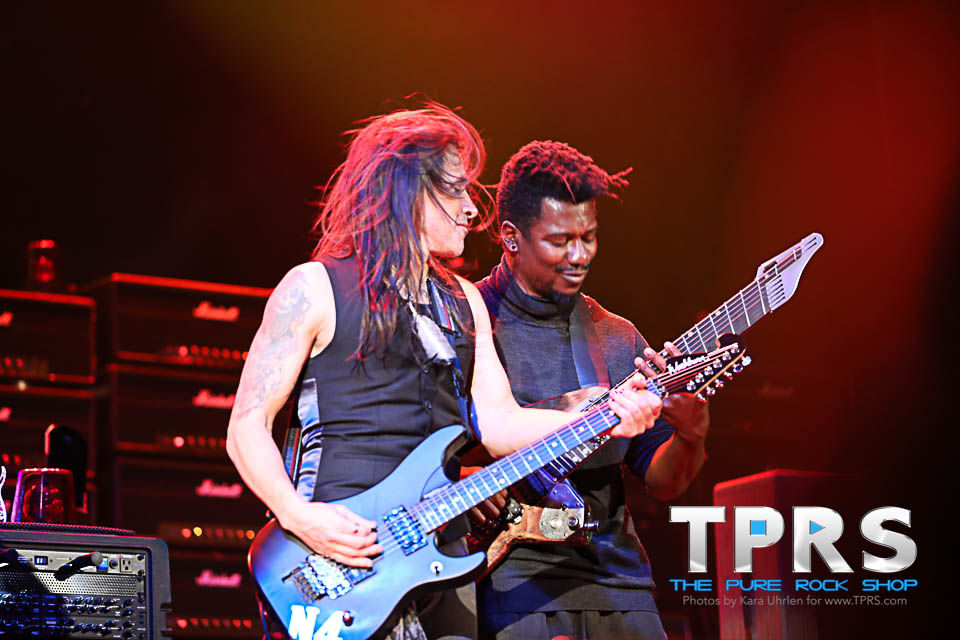 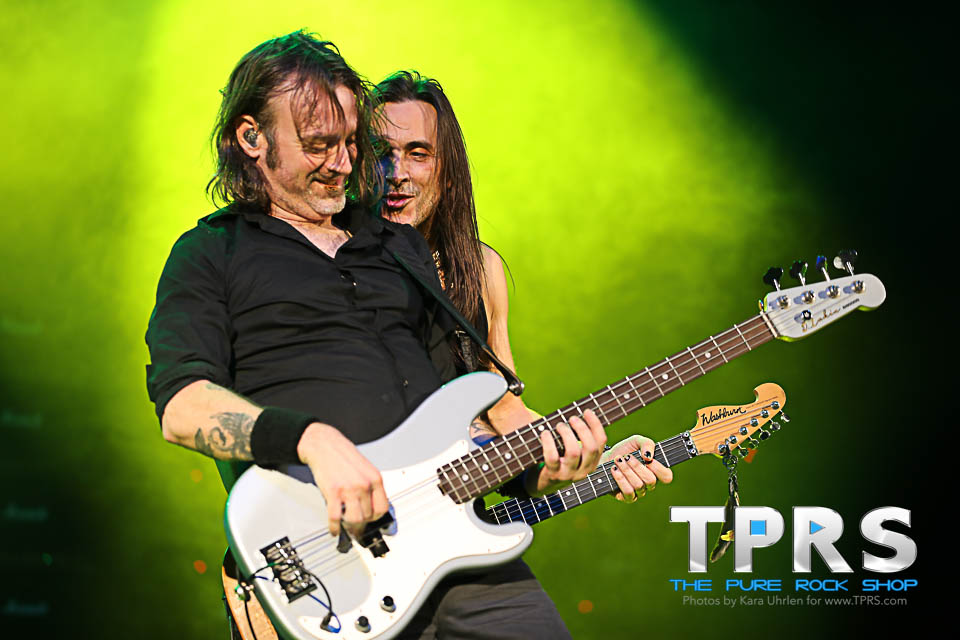 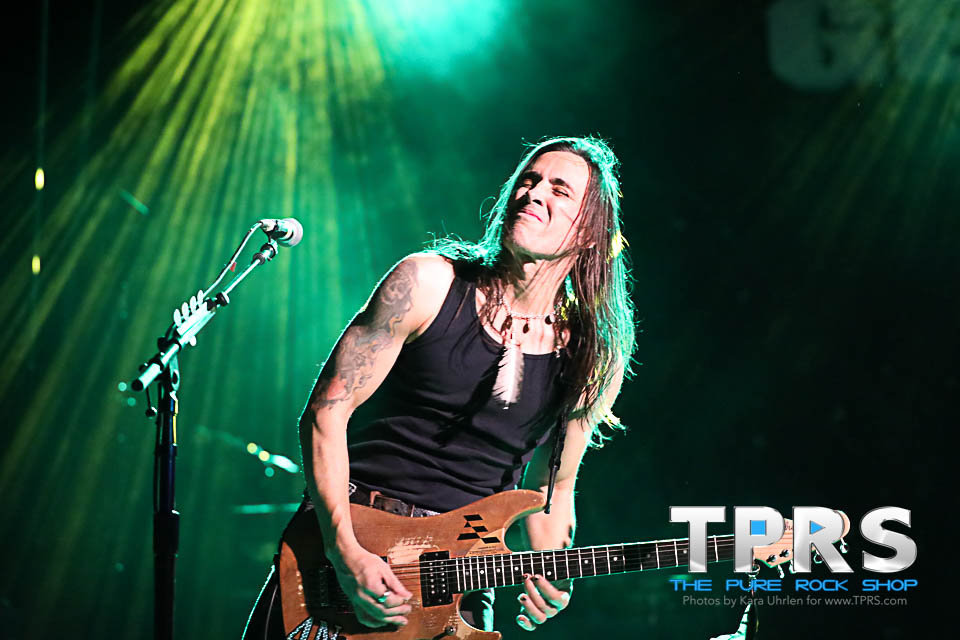 The highlight of Bettencourt’s set was the excellent medley. It was inspired by a young fan’s own collection of riffs and solos from Bettencourt’s career with Extreme that oh so appropriately began with his rendition of “Flight of the Wounded Bumblebee,” which fans will recall as the introduction to the song “He-Man Woman Hater.”  While better known for acoustic ballads than instrumental gymnastics, the mutli-talented Bettencourt was without a doubt the stand-out surprise of the evening.

Next, the bearded owner of those trademark “bullseye” guitars took the spotlight.  Badass Zakk Wylde of Ozzy Osbourne and Black Label Society, treated us to some up close and personal shredding, giving the entire venue a front-row seat as he spent equal time on stage and in the theater aisles and balcony, even bringing one of his youngest fans who he dubbed “Father Eli” to the stage to help out with vocals on the Black Sabbath classic “War Pigs” in celebration of Ozzy’s 70th birthday. 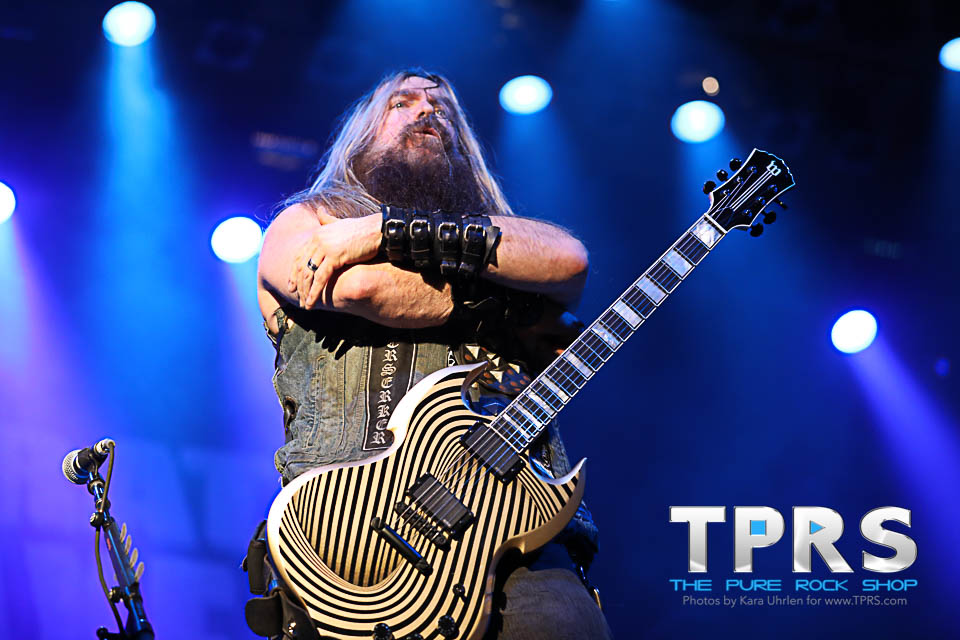 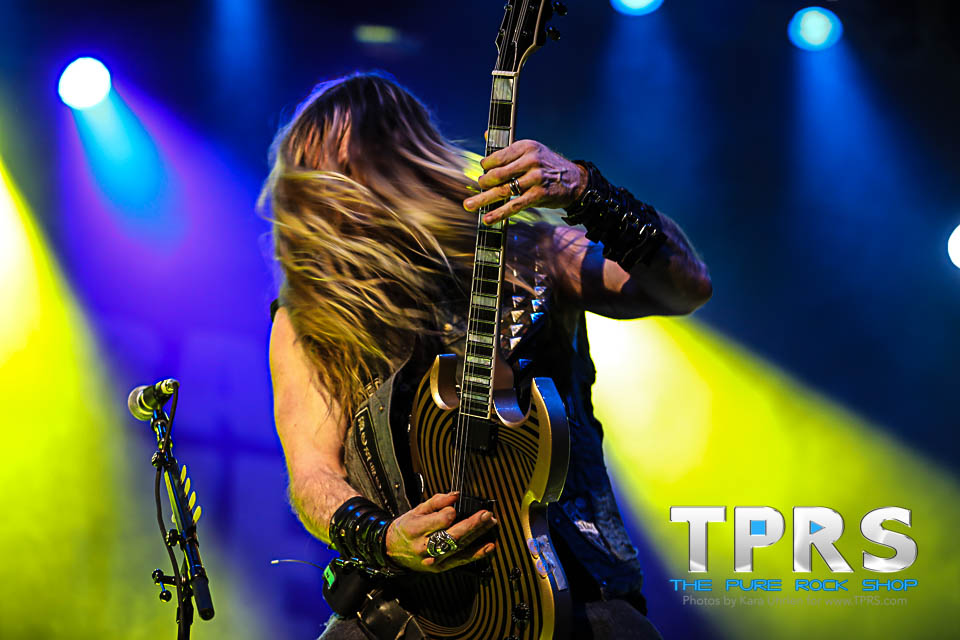 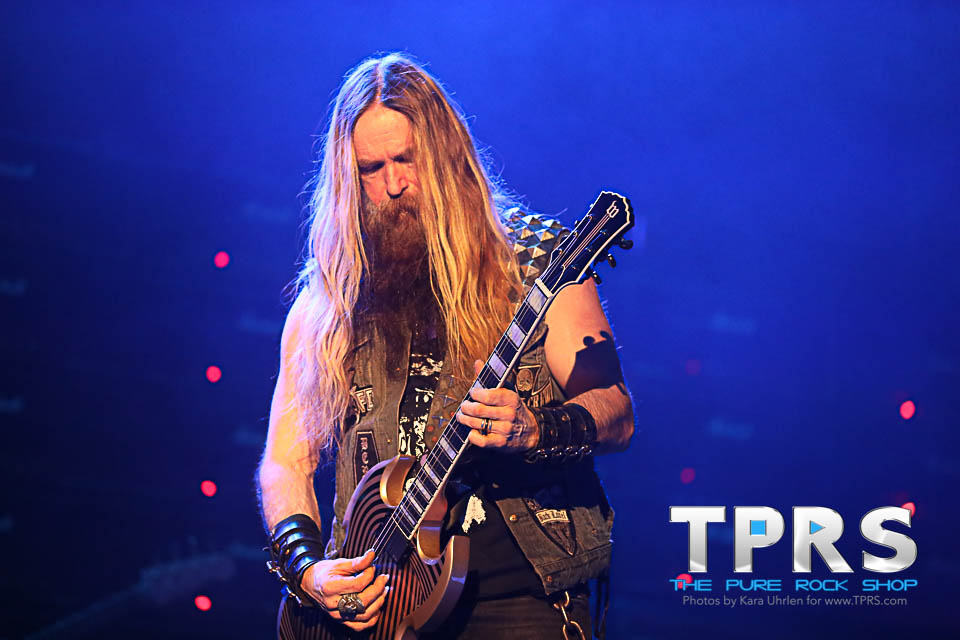 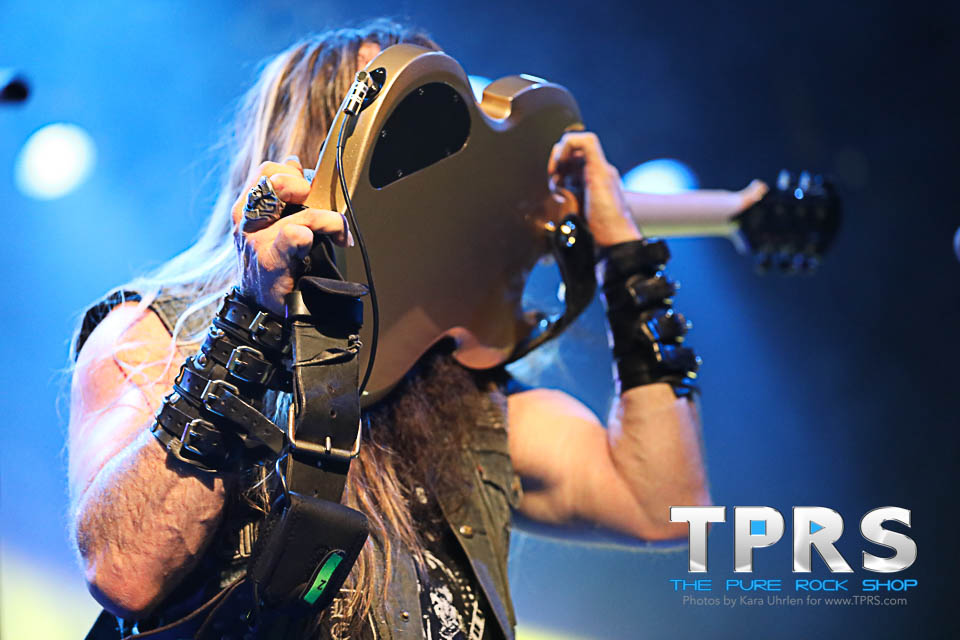 Highlights from Wylde’s set included a cover of Gary Moore’s “Still Got the Blues,” where Bettencourt and Wylde traded off riffs from the center of the room, and were later joined by Vai who made his debut from a box seat on the front balcony. 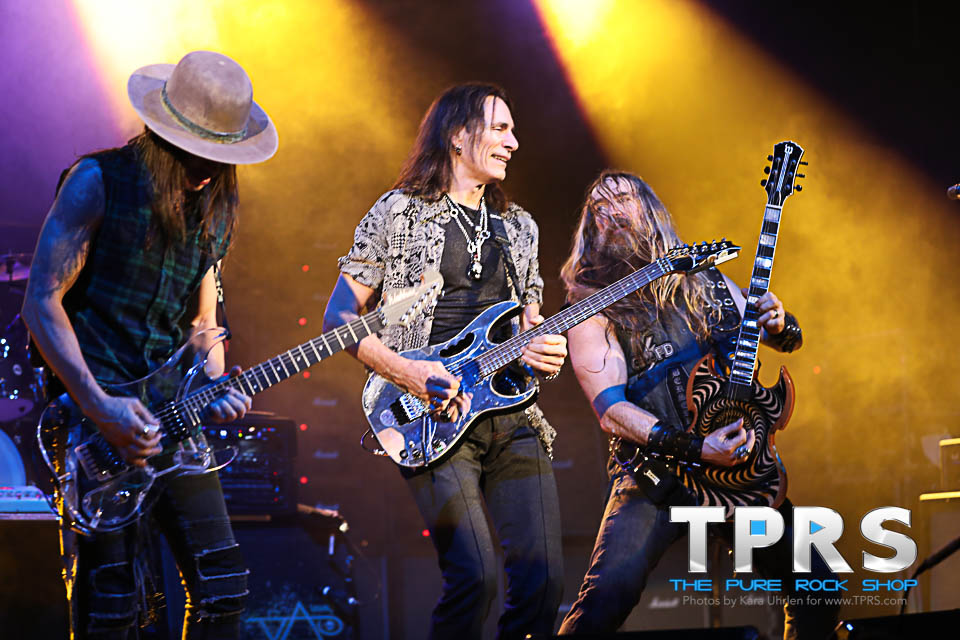 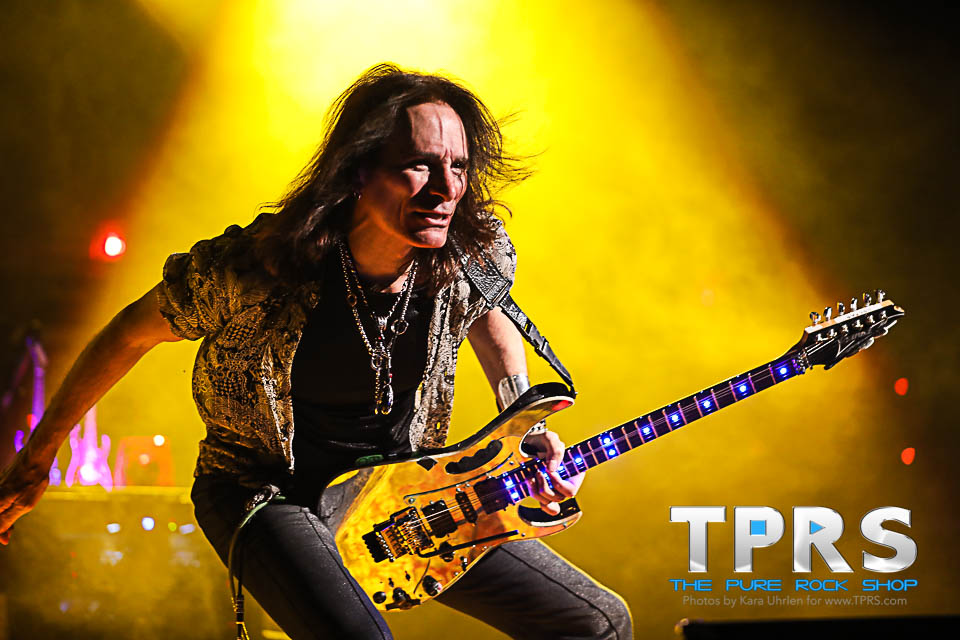 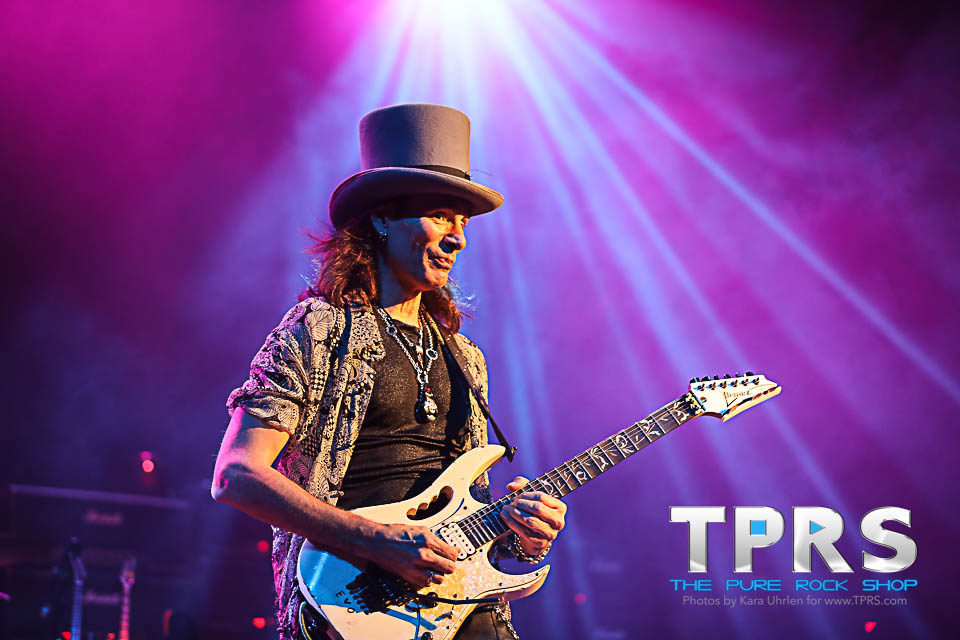 Vai discussed his rationale behind his own set selections during our interview, and strived to offer diversity by kicking things off with the upbeat “There’s a Fire in the House” from Fire Garden and closing with the touching weep of “For the Love of God” from his Passion & Warfare album.

As he poured out so much emotion, lots of whammy bar and a bit of tongue action, you’d think Vai would be a difficult act to follow, but when Yngwie Malmsteen entered the stage adorned in black leather and surrounded by a cloud of fog, he brought the entire audience to their feet.  His fingers flew up and down the fretboard with that signature neoclassical metal shredding on his custom Fender stratocaster performing more songs than the other talents due to his top billing and sheer speed.  In closing, Malmsteen was joined by Vai for a rendition of “Black Star” from his Rising Force album before the full ensemble took the stage again for a very special encore. 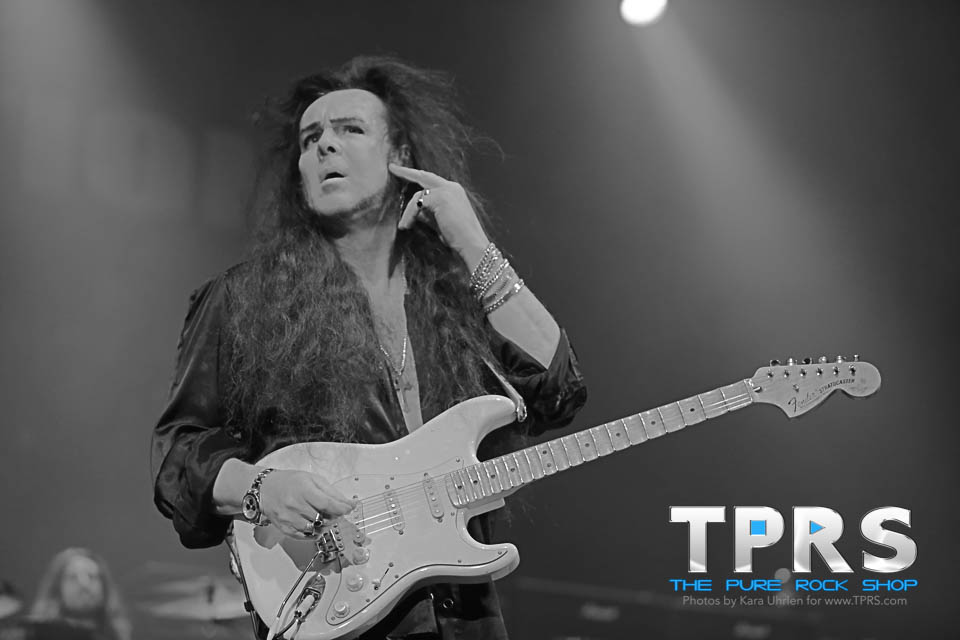 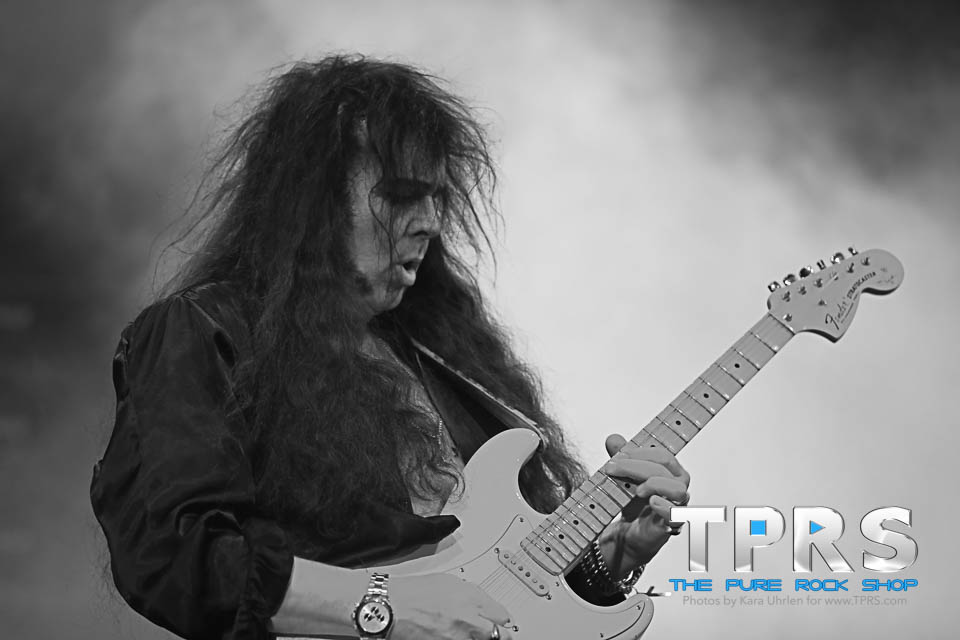 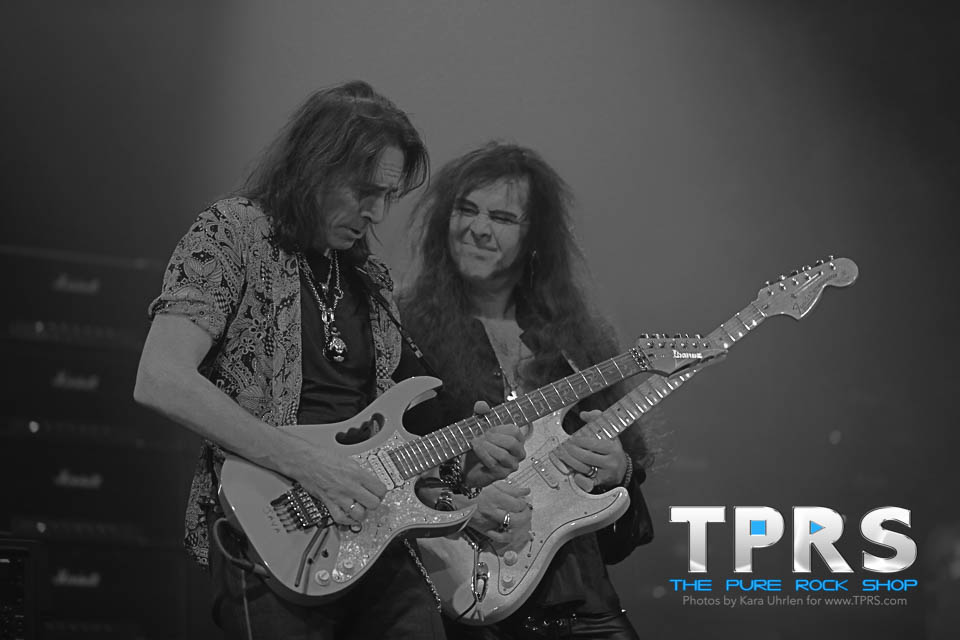 If you listen closely to our interview, you’ll catch the Generation Axe version of “Frankenstein” which was recorded on the band’s Asian tour, and is due to be released on the group’s Live in Asia album via a pledge campaign. Seeing the song performed live gave us a different perspective, as we watched Bettencourt and drummer JP Bouvet trade off rhythm duties.  And as if the Edgar Winter Group classic wasn’t “epic” enough, as promised, the band performed their newly arranged version of the Queen classic “Bohemian Rhapsody.” Lastly, they closed out the evening with a show-stopping version of Deep Purple’s “Burn” featuring Malmsteen on lead vocals. Like many that evening, at that very moment, I think I found my happy place! 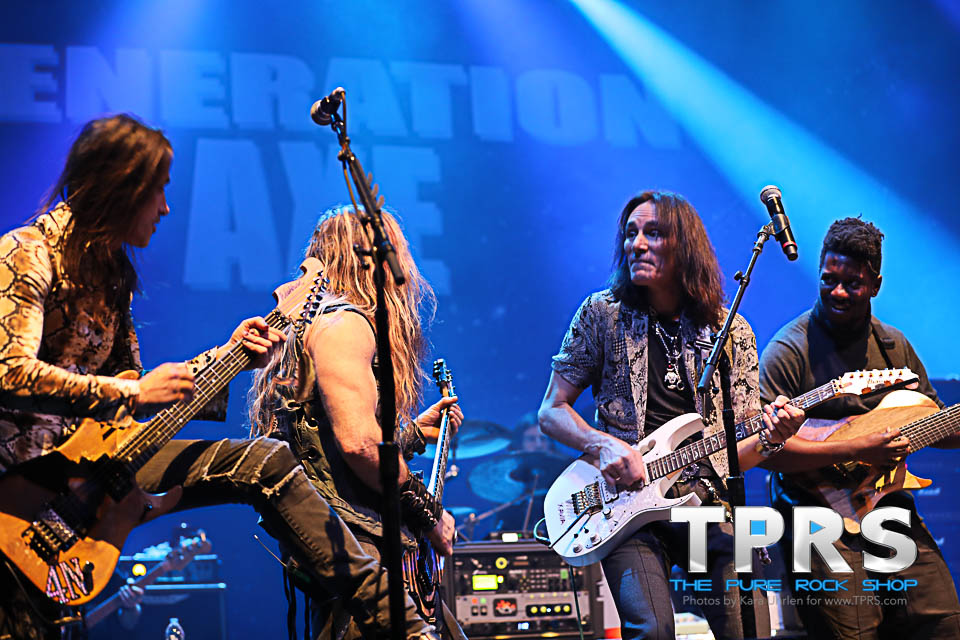 For more info on the Generation Axe tour, visit www.generationaxe.com, and be sure to check out the band’s pledge campaign.

Catch more radio interviews and pure rock programming on 91.7 FM WNJR Washington / Pittsburgh and online at WNJR.org daily from 3pm EST – Midnight.  And follow us @ThePureRockShop for the latest pure rock news and show coverage including more photos from the Generation Axe show.