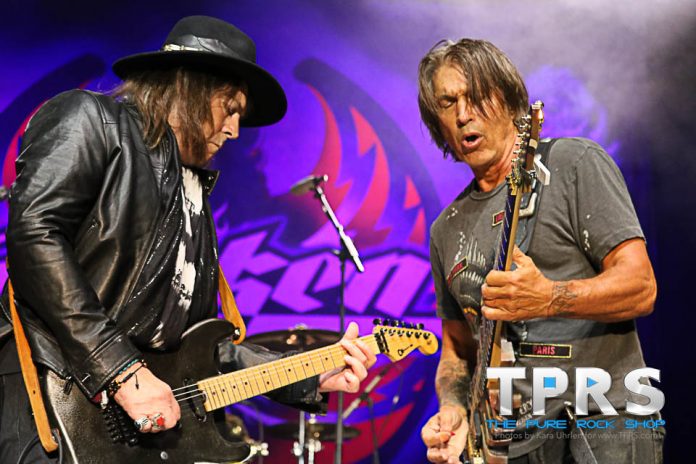 Grand Rocktember continued on Friday afternoon with local musician Chris Hawkey kicking off the day with a blend of original country rock, and an eclectic collection of rock, metal and grunge allowing the crowd to grow strong for the most popular band of the day KIX! 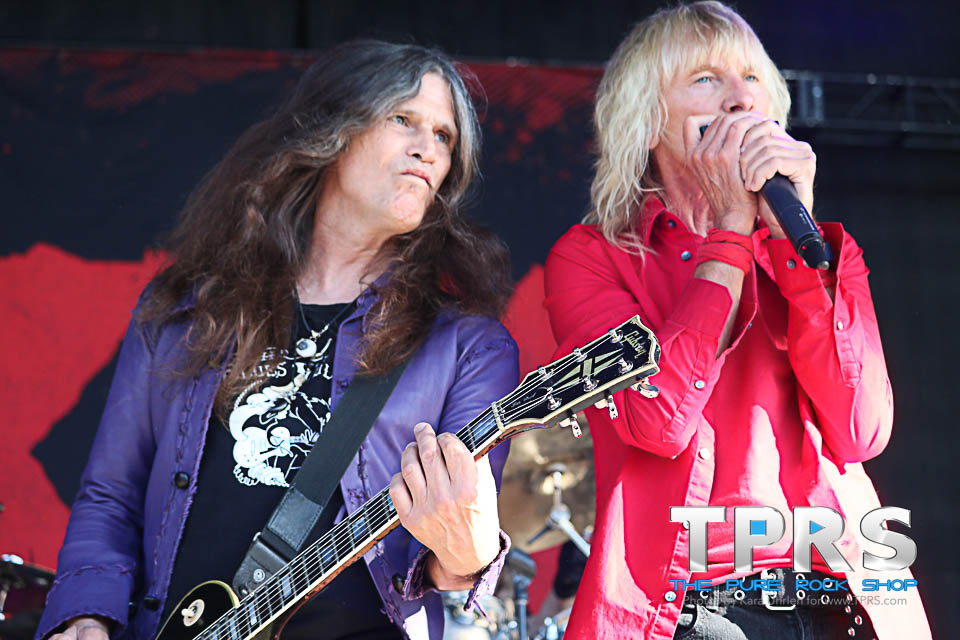 In celebration of the 30th anniversary of Blow My Fuse, the KIX band churned out the album in it’s entirety. Quite a unique treat for fans who have never heard songs like “Piece of the Pie” or “Dirty Boys” performed live. 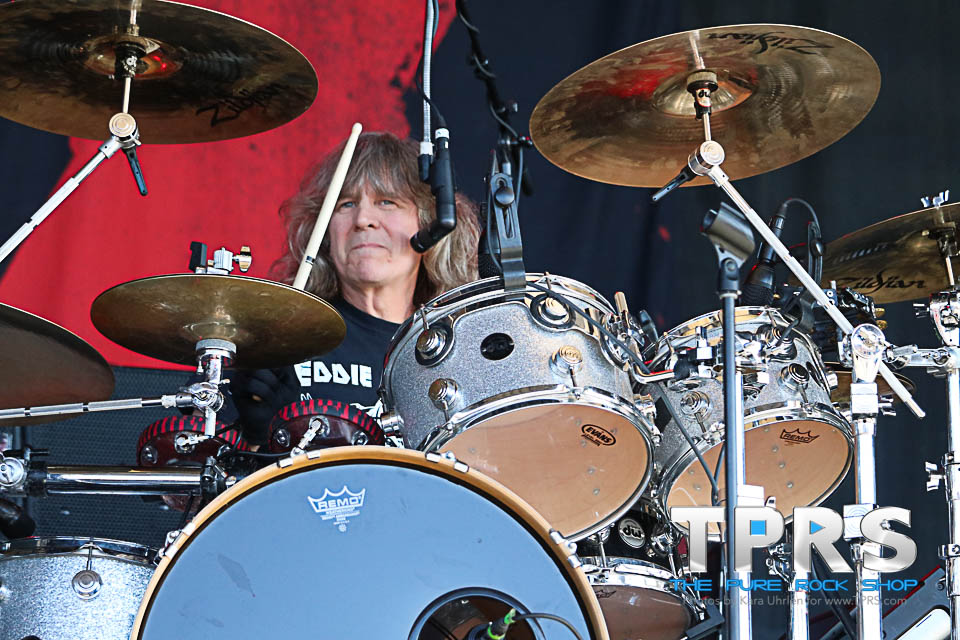 Fronted by the always entertaining Steve Whiteman, the band features guitarists Ronnie Younkins and Brian Forsythe on guitars, along with Mark Schenker on bass and Jimmy Chalfant on drums, and is alway the “must see” band at any festival for both the fans and the other musicians.  This show was no exception. 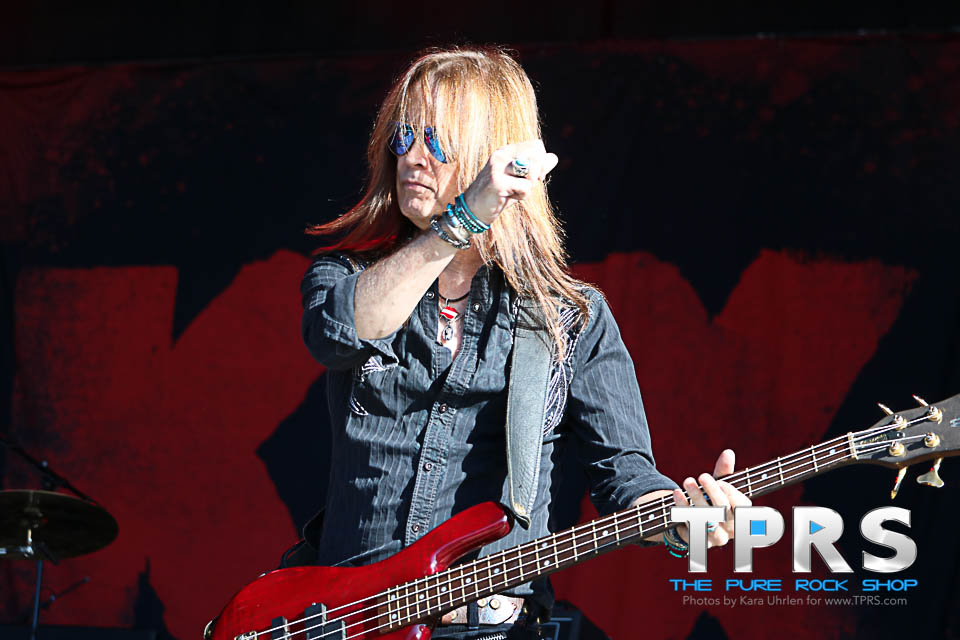 For more from KIX, check out our interview with guitarist Brian Forsythe from last winter’s tour.

The line-up continued strong with WINGER featuring Kip Winger on bass, vocals and keyboards with Paul Taylor missing from the mix, Reb Beach and John Roth on guitars, Rod Morgenstein on drums, and Howie Simon filling in on bass while Kip performed on keys for a couple favorites like “Miles Away.” 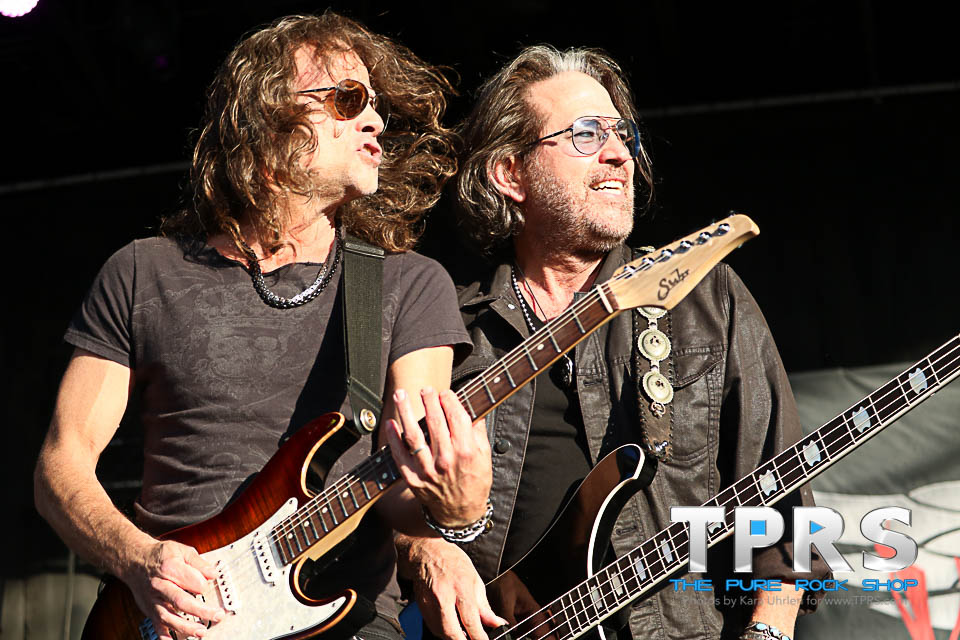 Kicking off the set with “Midnight Driver of a Love Machine,” Winger’s set’s had a few hiccups with technical issues at set list changes, that proved rather entertaining leaving Reb scrambling to change guitars as “Junkyard Dog” came in second and “Madalaine” moved to the end of their set. Notedly missing from the set was “Rainbow in the Rose” as us media folks were too far from the stage to get our requests heard…

The set did however allow for lots of soloing and fan favorite “Seventeen” which seems to have adopted a new chorus given the years that have passed, and I’m happy to say that she’s still charting in older than I am! 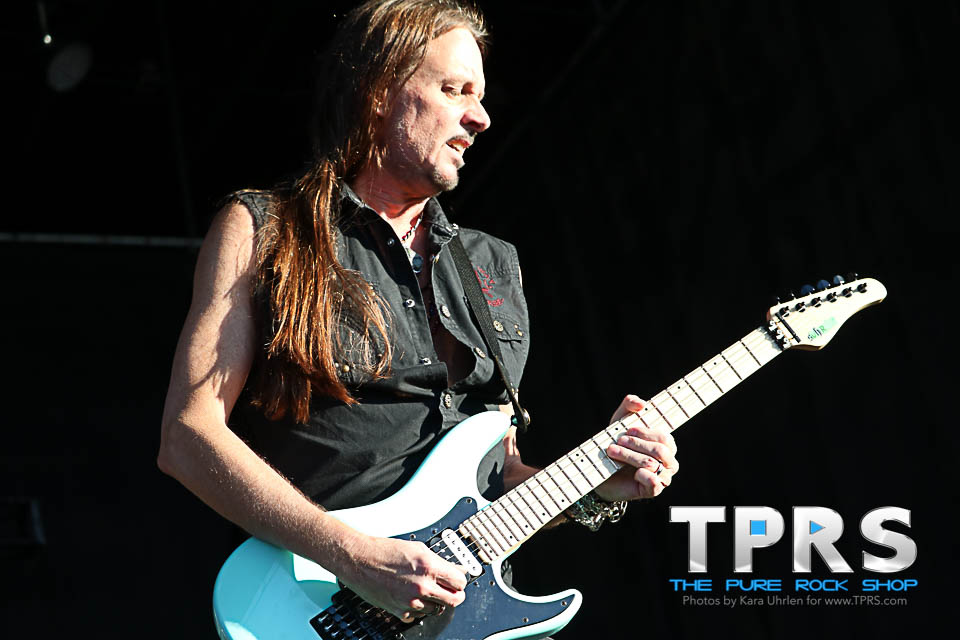 According to the Nashville Publicity Group, Stryper is happy to report that after a medical scare in August, guitarist Oz Fox will return to the road for most of the band’s scheduled tour dates this fall.  In his absence, the band has performed as a three-piece, but during this show, Howie Simon joined yet another band to fill in for his good friend Oz supporting Stryper on guitar and vocals. 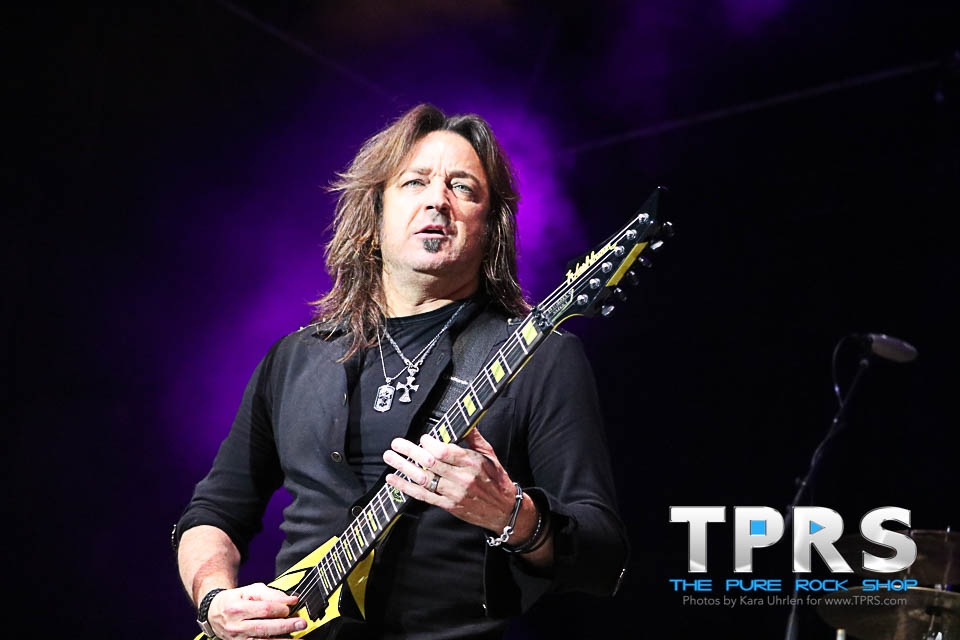 Brothers Michael Sweet (guitar and vocals) and Robert Sweet (drums) were also joined newest addition Perry Richardson on bass, who many will remember from his time with Firehouse. 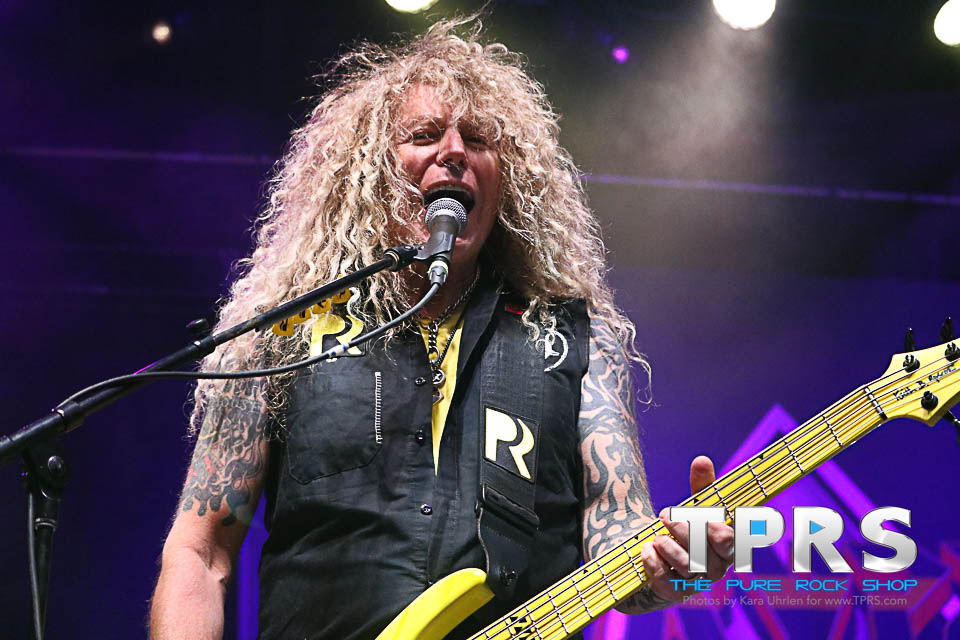 Without doubt the heaviest band of the evening, Stryper opened their set putting God first with “Yaweh” from their 2015 album Fallen. Then took fans back with favorites like “Sing Along Song” and “Honestly” from To Hell with the Devil as well as “Free” and “Soldiers on Command” later in the set.  They also focused heavily on their latest release including “The Valley,” “Sorry,” and the title cut “God Damn Evil.”

You can learn more about the band’s latest release God Damn Evil from our interview with frontman Michael Sweet. 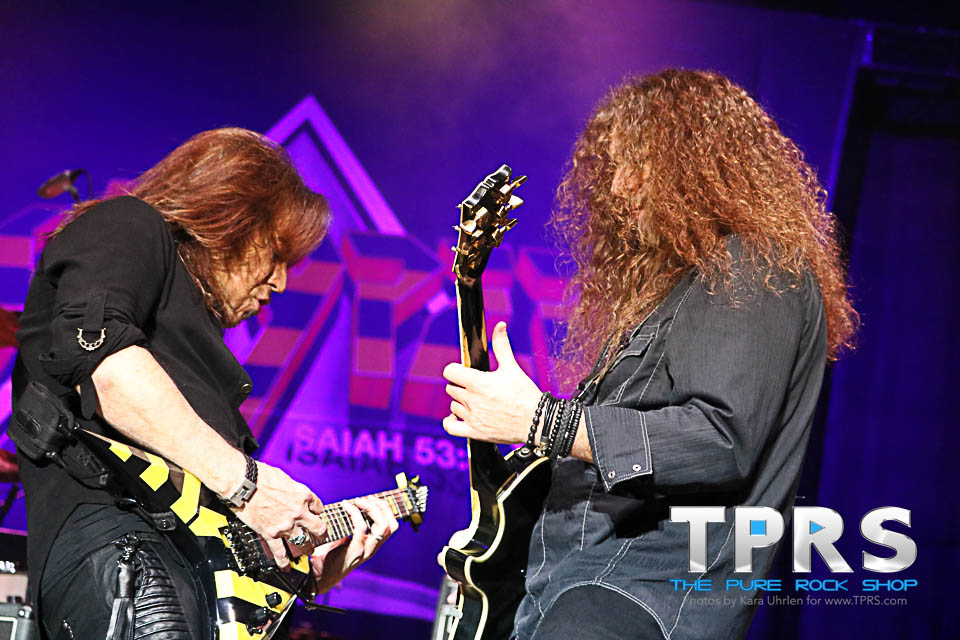 By the time the headliners came out, it was odd that a good bit of the crowd had dissipated, perhaps due to the lack of substantial food offerings at the amphitheater, or perhaps the tailgating in the parking lot was more fun.

Scrap Metal hit the stage first with a set of songs including Nelson, Slaughter, Lita Ford and Boston classics.  Missing from their supergroup ensemble were Eric Martin who performed the day prior and Stephen Pearcy who’s band Ratt was earlier removed from the line-up, allowing room for Scrap Metal and Dokken to perform this evening.

Mark Slaughter was a welcome surprise as he was not noted as performing on the Grand Rocktember schedule, but has been out performing with Scrap Metal and Slaughter this summer as noted in our recent interview with the Slaughter band frontman. He lead the charge opening the set with “Mad About You” and “Up All Night,” which admittedly was a bit odd to hear opening a show, and then later took the mic back for “Fly to the Angels.” 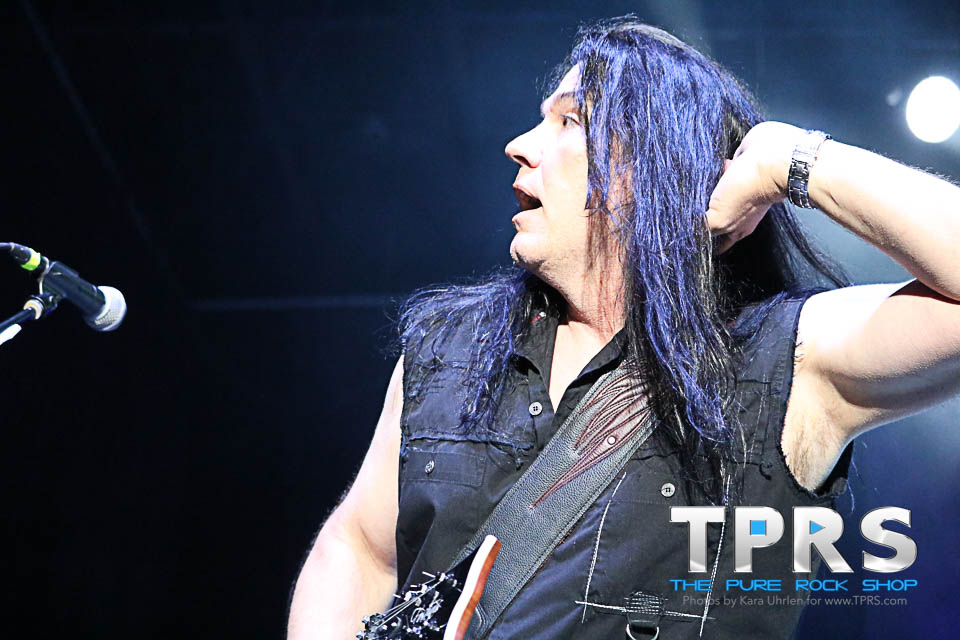 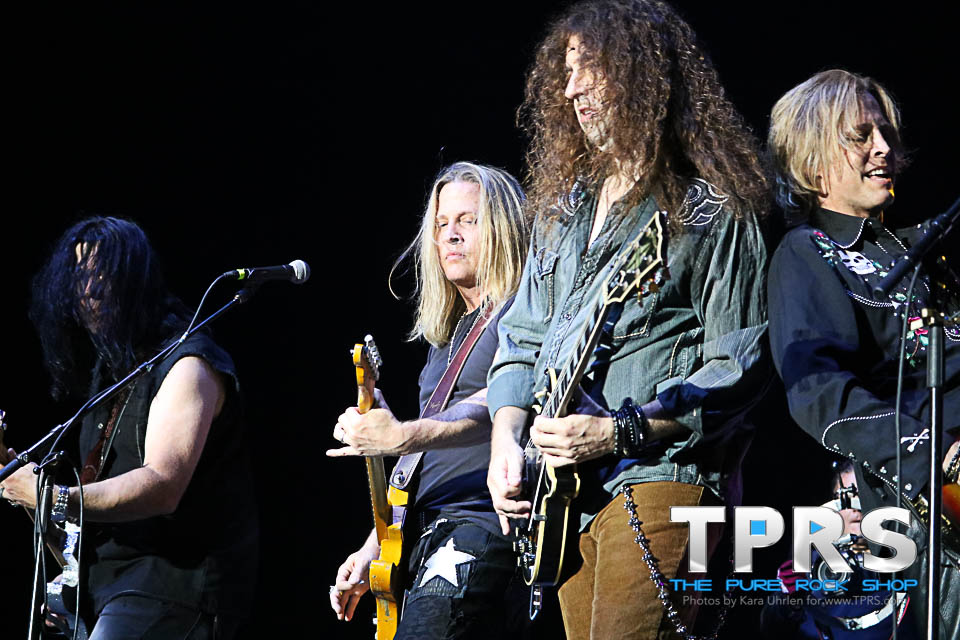 Backing up Mark Slaughter were the Nelson twins Matthew and Gunnar who naturally introduced Nelson band favorites “After the Rain” and “Love and Affection” accompanied by Howie Simon on guitar, before a rose joined the thorns as she appropriately put it… 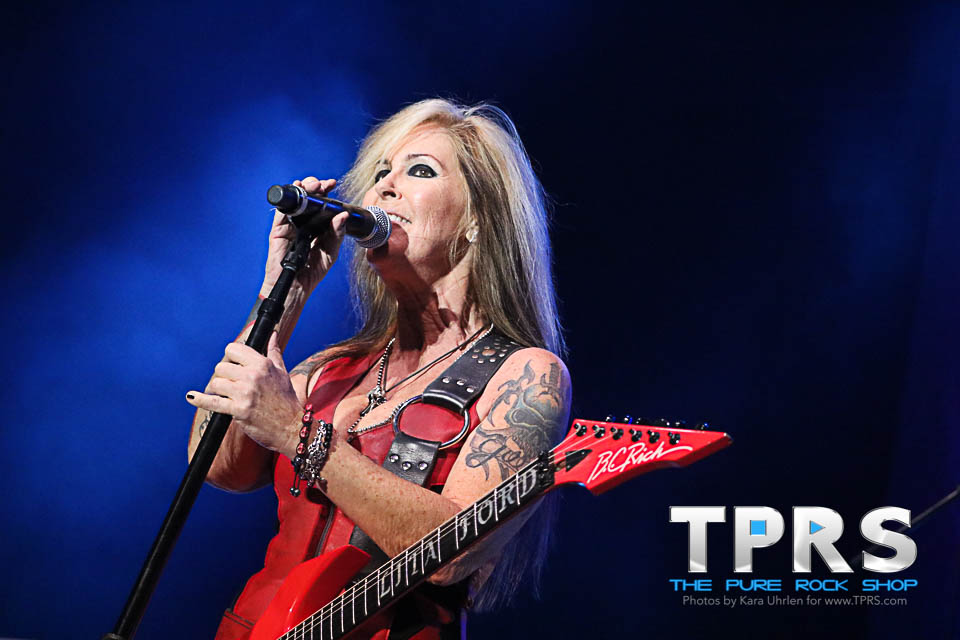 Miss Lita Ford kicking ass as usual with “Bitch is Back,” The Runaways‘ classic “Cherry Bomb,” and “Kiss Me Deadly,” which of course had us wondering why drummer Bob Rock wasn’t there to join his current and former band members.  Instead, as mentioned in yesterday’s coverage, drum duties were filled by Y&T’s Mike Vanderhule, who unfortunately didn’t perform the day prior due to recent cancellation of their tour. 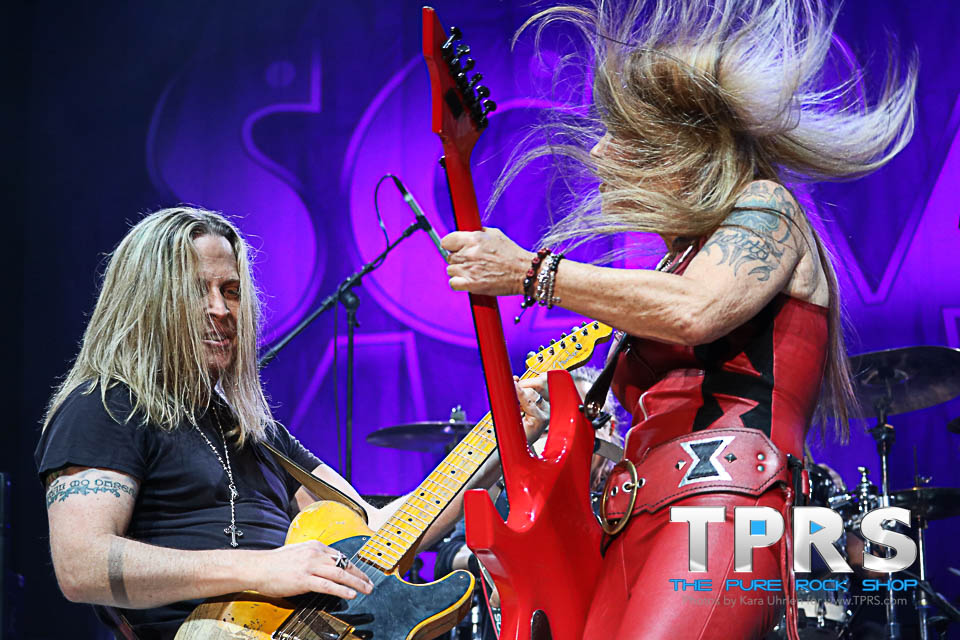 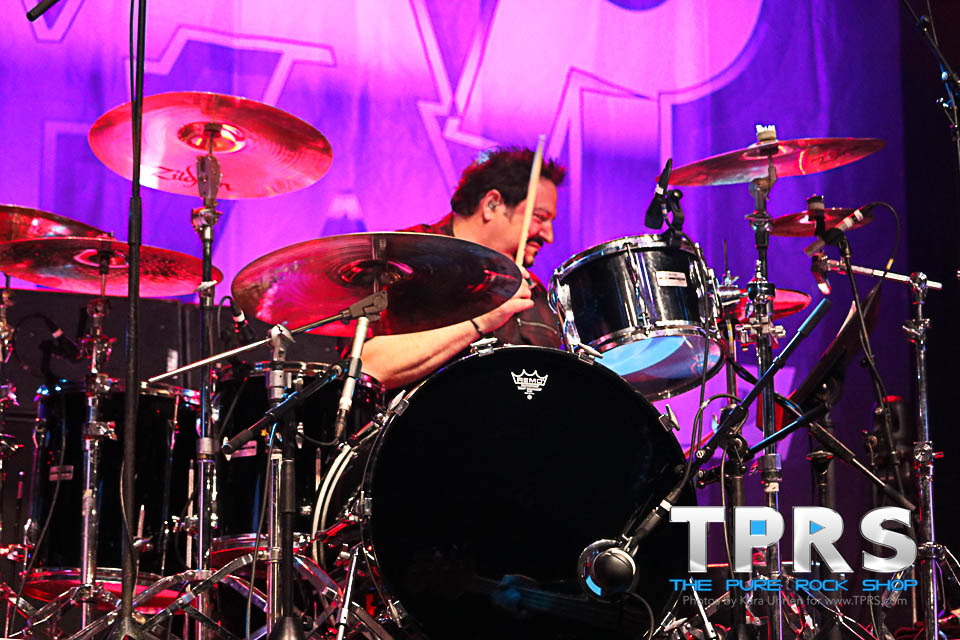 Also important to note that Gary Corbett was the man behind the keyboards during Scrap Metal, considering his history as a song writer and time with Cinderella, Lou Gramm, and Kiss, he certainly has earned legendary status in our minds along with Boston’s Barry Goudreau on guitar who’s classics “Piece of Mind” and “Foreplay/Taking My Time” were sung by Mark Holt. 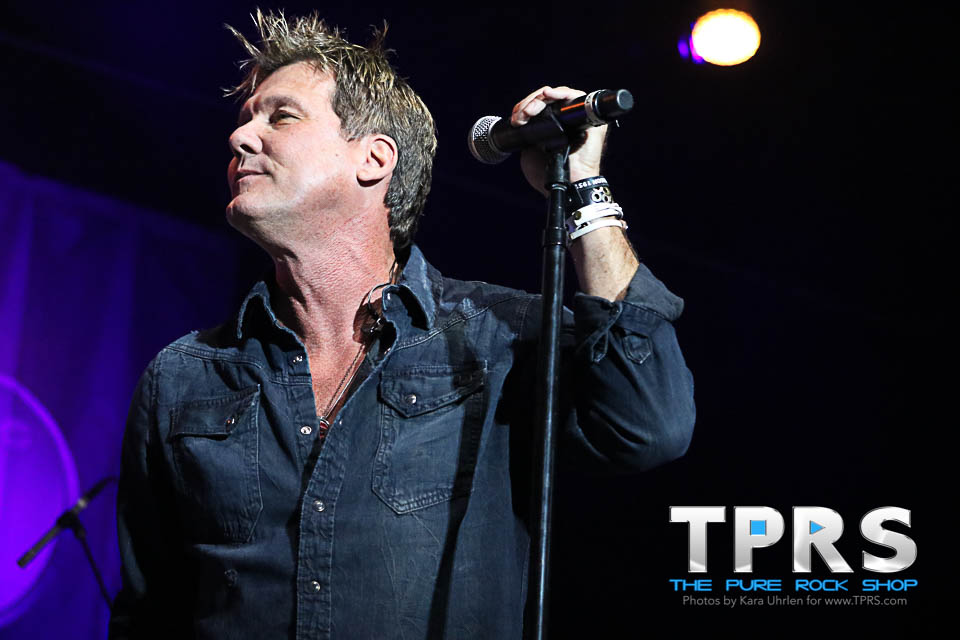 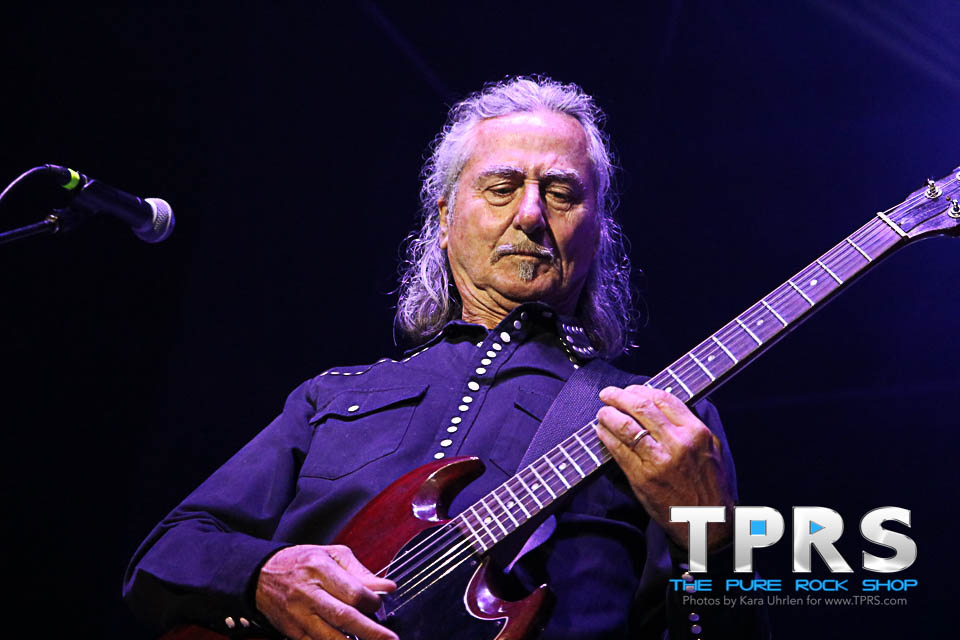 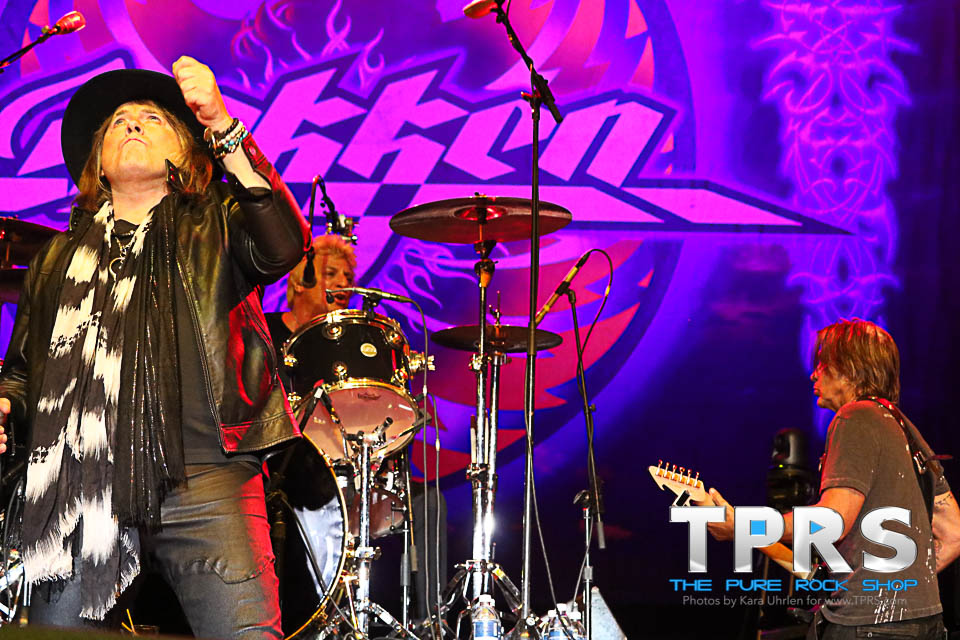 Notably missing from the reunion was on of the busiest guys in rock ‘n roll, bassist Jeff Pilson who we admitted checked in with during the band’s performance of “Just Got Lucky,” and talk with regularly about his current projects including Foreigner, The End (with Brown, Lynch and Warrant/Lynch Mob vocalist Robert Mason), and various production roles.

Also missing was “It’s Not Love,” which found it’s home in the Lynch Mob set the following day featuring Nathan Utz on vocal duties and “Maddest Hatter” from Erase the Slate, which would have been fun to see with Reb Beach in the house that evening. 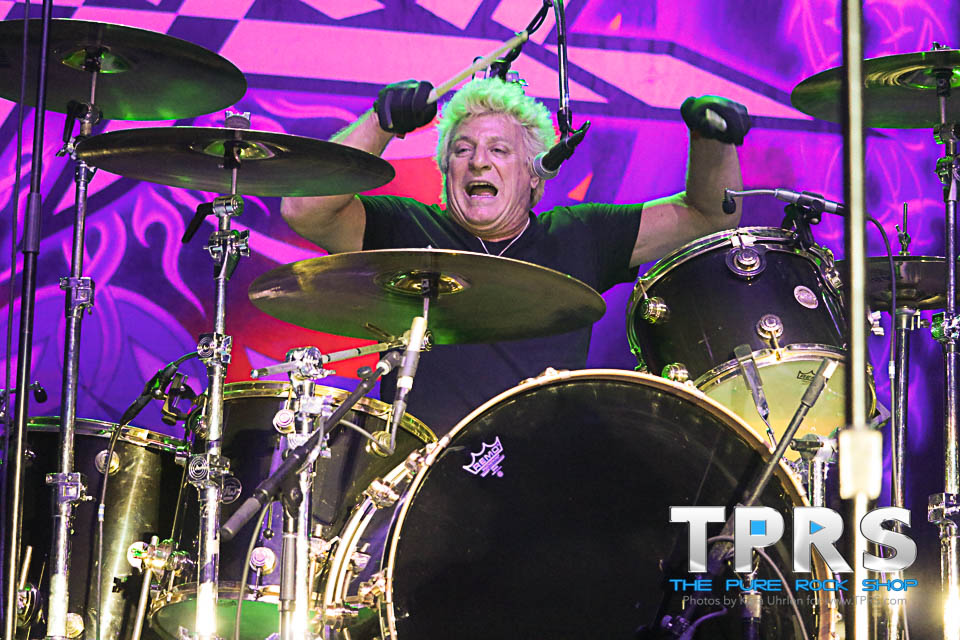 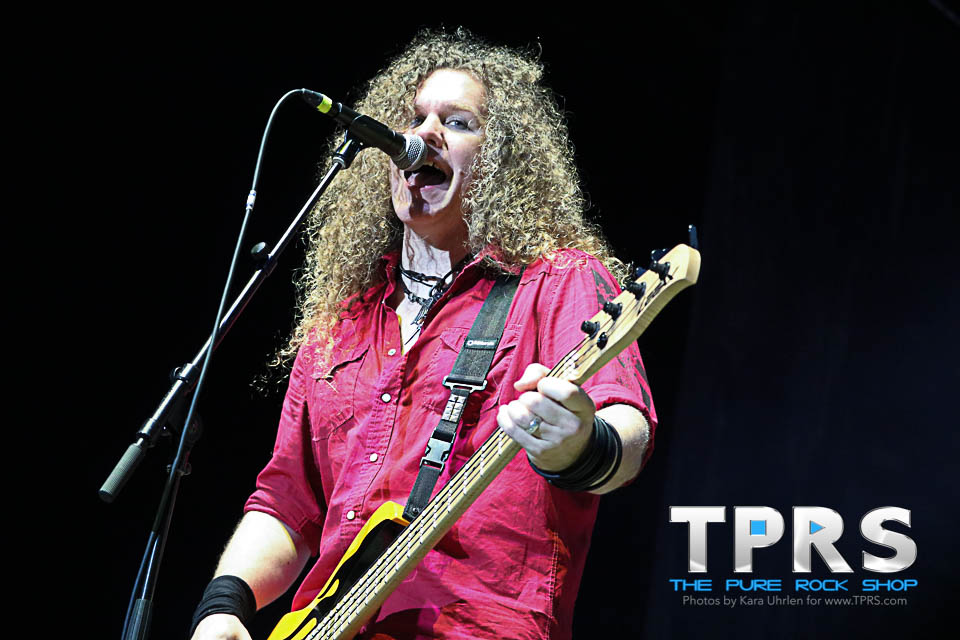 The set focused on older favorites like “Kiss of Death,” “Into the Fire” and “Dream Warriors” showcasing George on guitar and also included a unique version of “Alone Again.” While it didn’t gain the same attention as the reunion that brought us Return to the East Live in 2016, this was quite a special evening and certainly one of the highlights of the Grand Rocktember showcase of band’s this summer. 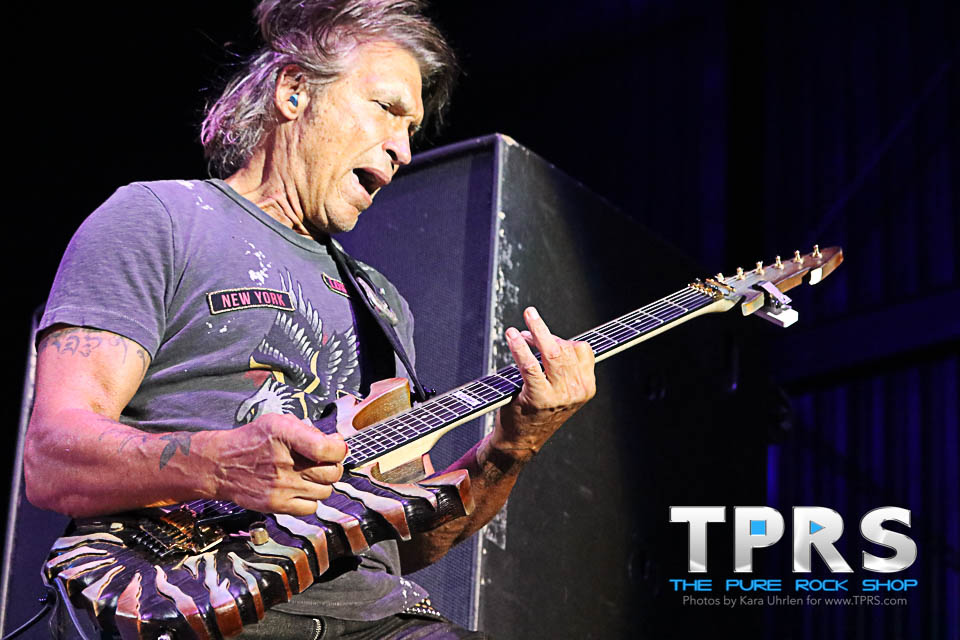 Check out our coverage from Thursday for more from VAIN, Eric Martin Band, Great White, and Skid Row. And, catch our coverage of the final day of the festival with Hericane Alice, Tuff, Autograph, Lynch Mob, Queensryche, and Tesla.