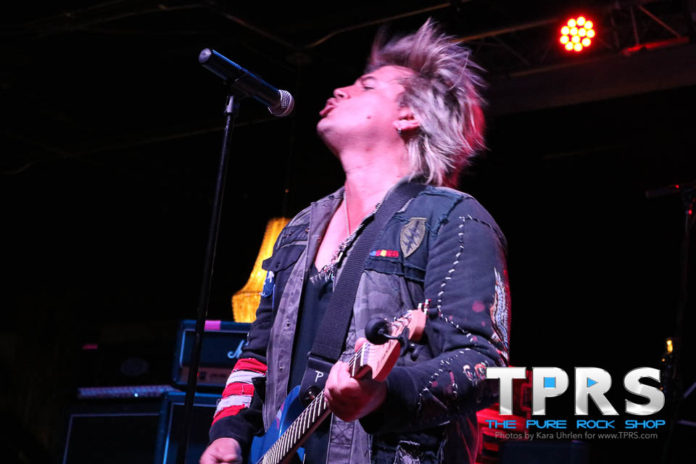 If you haven’t already, start at the beginning with an intro to the festival and Day 1 coverage, then check out Day 2, before moving on to this, the final day of the MelodicRock Festival, which began with performances by Chicago’s own Lynn Allen and Gary Brandon from the American hard rock band White Sister.

Later, Australian born The Radio Sun heated things up performing “Tell Me What You Want” to a crowd of energetic fans, who they soon treated to personally signed posters, while taking photographs and handing out guitar pics for well over an hour after finish their set.

Their performance included guest appearances from Paul Laine and Cassidy Paris and also featured new music like “Heaven on Earth” and “You’ve Got the Touch” from their latest album Unstoppable, which seems an appropriate title given that guitarist Steve Janevski tell us that The Radio Sun already has another release slated for August in addition to his other band Black Majesty planning a release in September.

Also noteworthy was a cover of Andy Taylor’s (Duran Duran) “I Might Lie” which can be found as a bonus track on their Heaven or Heartbreak album before closing the set out with “Can’t Get You Out of My Head” while frontman Jason Old sported a jersey from our local Steelers‘ Troy Polamalu jersey over his Winger shirt representing both our local music (homegrown Reb Beach) and sports (wait, aren’t we in Chicago this weekend? I think we need to get this guy to the ‘Burgh and order him a Primanti Brothers sandwich). 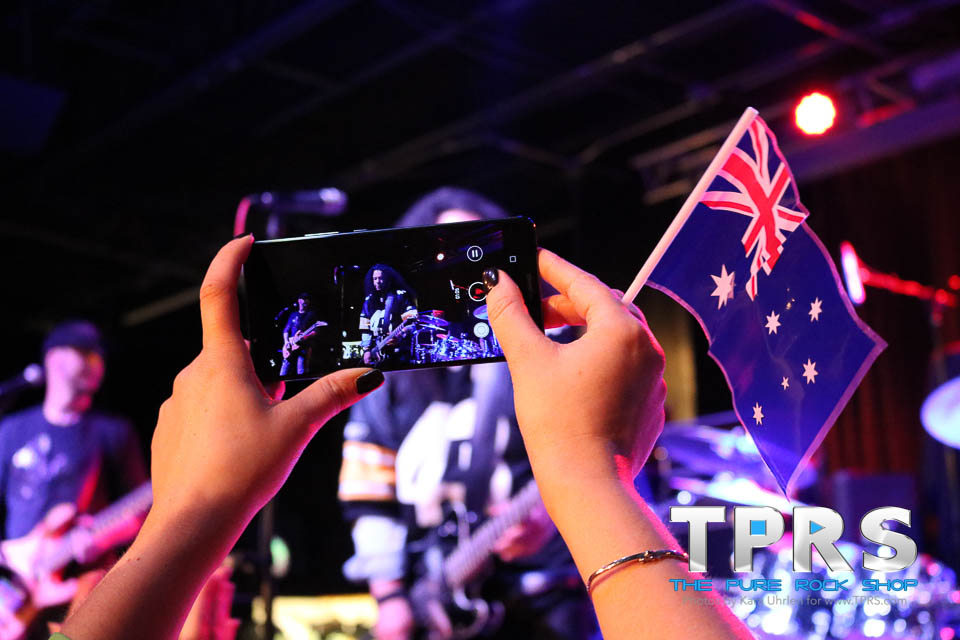 Up next, Maxx Explosion, a three-pice featuring Dokken bass player Chris McCarvill on lead vocals and bass, along with Jimi Bell on lead guitar, and BJ Zampa on drums also hailing from the House of Lords family.

Bred from New Haven, CT and apparently driving from there as well, the trio performed material from their two studio albums, Forever and Dirty Angels, and charmed the many ladies in the audience with a cover of Gary Wright’s “Dream Weaver,” which showcased Chris McCarvill’s vocals and reminded us just how lucky we are to have him supporting Dokken on the road these days.

Having never heard their material until this show, we immediately caught up with the band to get them added in the pure rock rotation at WNJR 91.7 FM where we feature more than 70 hours of rock and metal each week locally and online at WNJR.org.

“Great to be part of an awesome gathering of friends, personalities and bands. It’s just as much fun offstage as on. Cool to see such great bands, and swap all our triumphs and horror stories. It’s def worth the 14 hour drive!”

Appearing in support of their 2017 release, The Last Symphony, which is a 4-Disc set housed in two double jewel cases.  Attendees had a chance to pick up the discs, featuring  the albums Shotgun Symphony, On the Line of Fire and Sea of Desire all re-mastered from the original tapes, along with a collection of the band’s rarities over the years – b-sides, bonus tracks, song demos, live recordings and a newly recorded version of Carousel of Broken Dreams with the Shotgun Symphony’s original line up and producer from the debut CD.

Next was Boulevard, a Canadian AOR band that is making the festival circuit this year in support of their 2017 release Luminescence.

British rock veterans FM were moved up in the running order at the last minute, giving Paul Lane and his bandmates from The Radio Sun some more breathing room between sets given that Laine’s Defiants bandmates were removed from the bill early on.

FM is a five-piece with clean a clean guitar sound, sweet melodies and pop vocal harmonies first established in 1984, that is reminiscent of similar era bands like Night Ranger, Bad English, or even Bon Jovi, when you consider the strong emphasis on keyboards.  These melodic rock veterans kicked things off with the opening track “Black Magic” from their 11th studio album Atomic Generation newly released on Frontiers Music s.r.l., and later including my personal favorite “Killed by Love.”

This headlining performance at MelodicRock Festival was their first-ever appearance in the United States, and from what Jem Davis tells us, it likely won’t be their last.  In the meantime, fans can catch them in Sweden on June 1st.

“FM had an amazing time in Chicago, we were made to feel so welcome by everyone we met , loved every minute of our time there and the USA fans were incredible, can’t wait to get back there !!!!”

While not officially headlining, Paul Laine turned things up a rock with his rock star presence and high-energy delivery.  Joined by The Radio Sun as his backing band, Laine tore through favorites of Danger Danger‘s, taking us back with “Beat the Bullet” and “I Still Think About You,” from Screw it! along with Cockroach’s raunchy crowd favorite “Sick Little Twisted Mind.”

As a special treat Cassidy Paris joined the band, featuring her father Steve Janevski on guitar, to perform her “Talk About It” single, which was produced coincidentally by Paul Laine. Then, Laine finished things off with “Dorianna” from his own Stick it in Your Ear album before closing out the festival with an encore of Danger Danger‘s “Goin’ Goin’ Gone.”

“Performing with The Radio Sun and Paul Laine is always so much fun…performing with my daughter brought a tear to my eye…proud dad!”

Before the lights turned on and everyone bid the H.O.M.E. Bar a final farewell, attendees gathered to take a final photograph in front of the stage with Andrew McNeice in gratitude for making the festival possible.  While I will allow the quote from Wes below to speak to the atmosphere of this amazing event, I can’t say farewell without thanking Andrew for giving us the access to share these amazing memories with this very special melodic rock family, and can only hope that there will be another “reunion” very soon!

“Every MRF is a special event that is always like a family reunion. With this being the first event since MRF4 in 2014 there was very high expectations based on the previous events, but this one more than stands up to previous years. What always makes this event different than other music festivals is the inclusion of so many hard to see bands especially non-US bands in the scene that have never played here.

The opportunity to see bands like H.E.A.T., Crazy Lixx, FM, Treat, and Paul Laine is why so many of us melodic rock fans will come from so far away to attend MRF. Also, there’s always up and coming bands like Madman’s Lullaby, Station, FarCry, Dave Friday Band, Maxx Explosion, The Radio Sun, and many others plus the reunions like Fierce Heart and Shotgun Symphony.

While the music is important for any festival it’s the people that make it even more of event and through this festival I’ve made life long friends with many of them becoming like family over the years thanks to the Melodic Mafia Page.