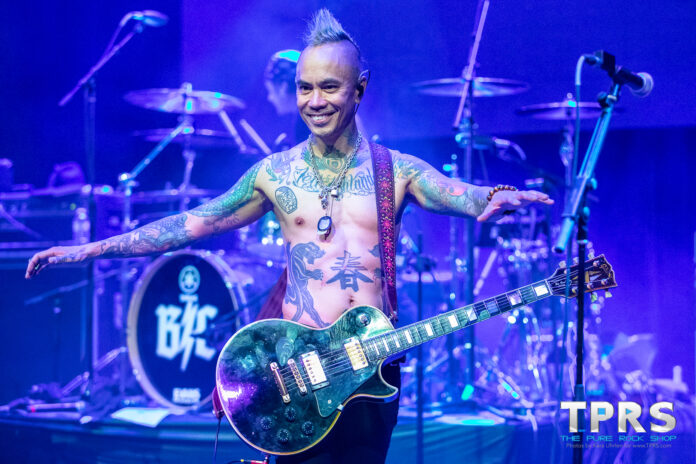 We set sail on February 9th out of the port of Miami on the long-anticipated Monsters of Rock Cruise.  With multiple attempts to get this boat a float, this launch was not only successful, it turned out to be perhaps the best line-up ever with Alice Cooper at the helm, an insane Swedish invasion, Vandenberg’s reboot, countless surprises, and some other blasts from the past.

The boat was the Freedom of the Seas and the ports were Cocoa Cay in the Bahamas and Cozumel, Mexico for those fortunate enough to catch some beach time.  The weather was refreshing for those of us exiting ice storms in the North, and the family was happier than ever for a rock ‘n reunion.

Sadly some friends were missing with anything from travel restrictions to vaccine requirements and illness keeping them away, but nobody was about to let that spoil the fun.   After all, the show must go on, and so it did.  With Enuff ‘Z Nuff kicking things off in their usual style and bringing out hits of their own along with newly recorded interpretations of Beatles’ favorites from their album Hardrock Nite.

Their first of two performances fronted by the charismatic Chip ‘Z Nuff on lead vocals and bass and fueled by the riffs of Tory Stoffregen and Tony Fennell, along with the always smiling Daniel B. Hill on drums. 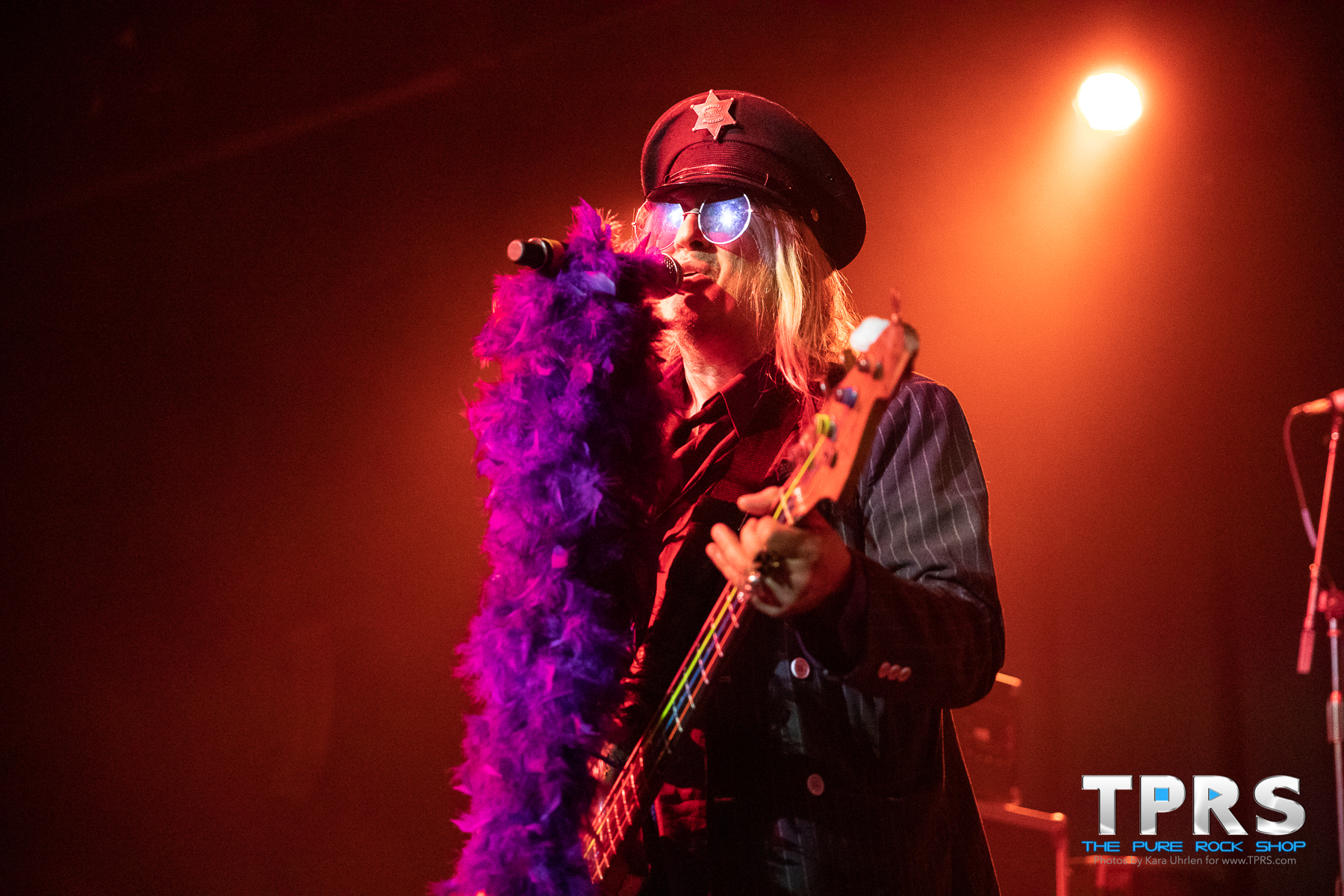 Rhino Bucket, who performed their first set the night before at the pre-party, jumped back in with an early set before the ship set-sail.  But, that didn’t mean they were finished with us, as frontman George Dolivo offered up a guest appearance during the Dangerous Toys set in the theater and joined some friends at a photo experience.  And naturally, guitarist Brian Forsythe could also be found with the infamous KIX band later in the day and again on Saturday. 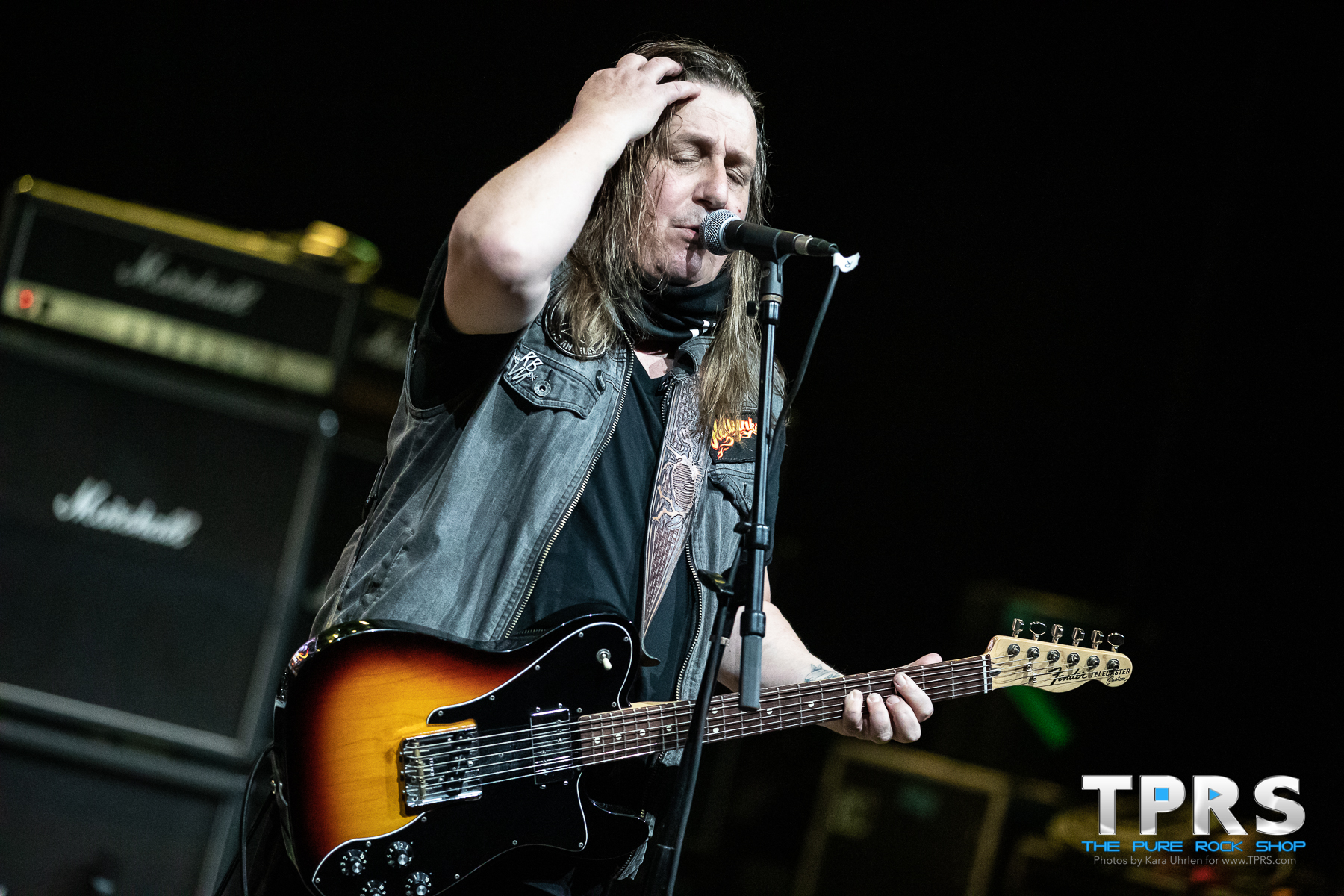 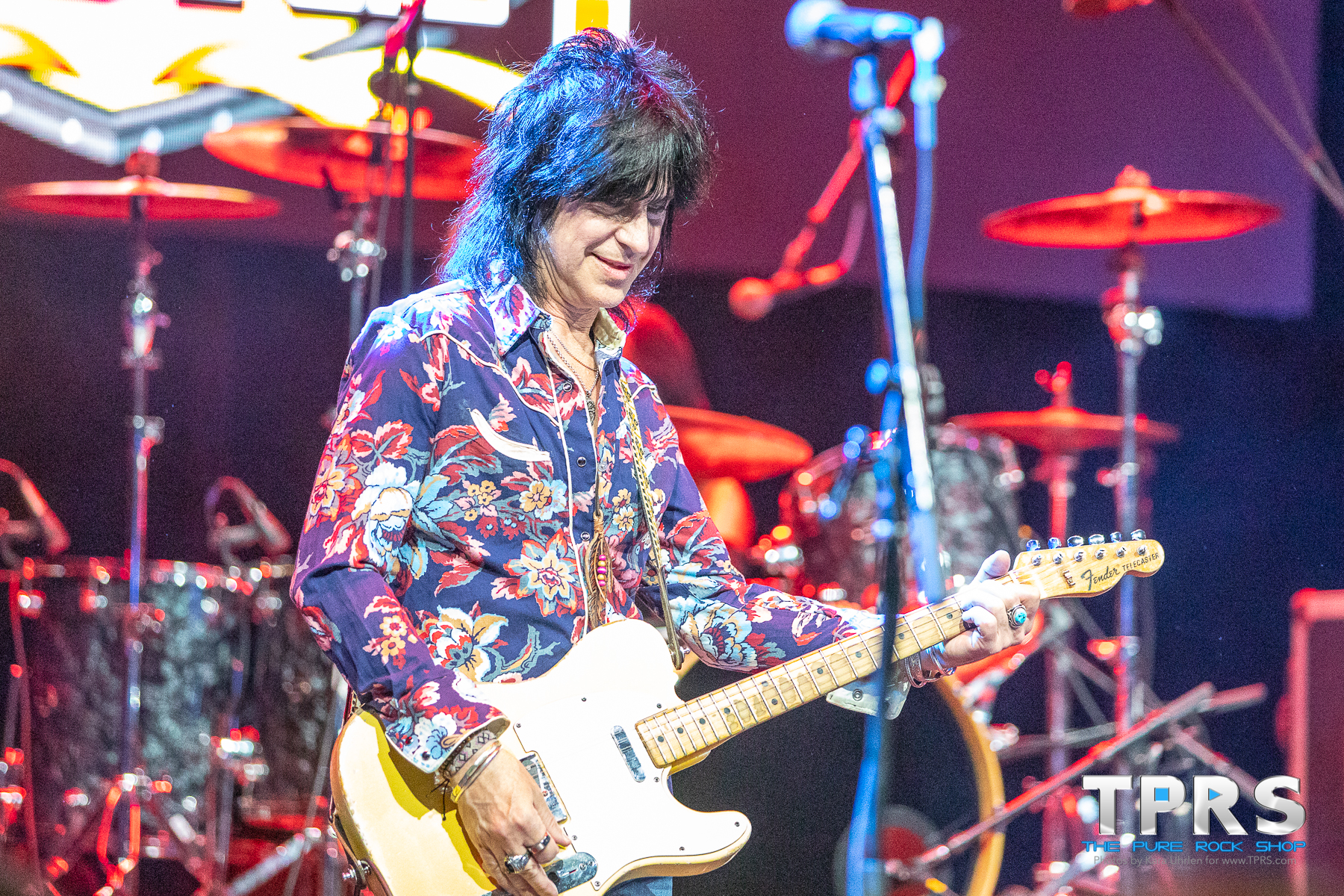 The sail-away band, was just one of several surprises on the first day.  Back for an encore after standing ovations on the 2020 sailing, Sweden’s H.E.A.T. brought bassist Jimmy Jay along for the ride this time, sporting a New Horizon t-shirt in honor of the new project of former frontman Erik Gronwall and current keyboardist Jona Tee.

Sadly Jona was unable to make the trip, and the band had to perform as a four piece for perhaps the first time ever.  While his energy and vocals were truly missed, tracks attempted to fill the void, and original frontman Kenny Leckremo had enough hair-flipping energy for everyone.

Kenny was created with much enthusiasm as he joined Jimmy, Don Crash (drums) and Dave Dalone (guitar) for this sail away kick-off and in Studio B.  He was also found accompanying Jeff Scott Soto along with several other members of the Swedish mafia on the final night.

For many of us from the states this was the first time catching Kenny with the band.  He did not disappoint as he belted out the songs he originally sang on like “Late Night Lady,” as well as mainstays of the band’s tenure with Erik Gronwall like “In and Out of Trouble” and “Emergency.”  Looking forward to the band’s next release on earMUSIC with Kenny back in the fold as well more festival shows in the year to come. 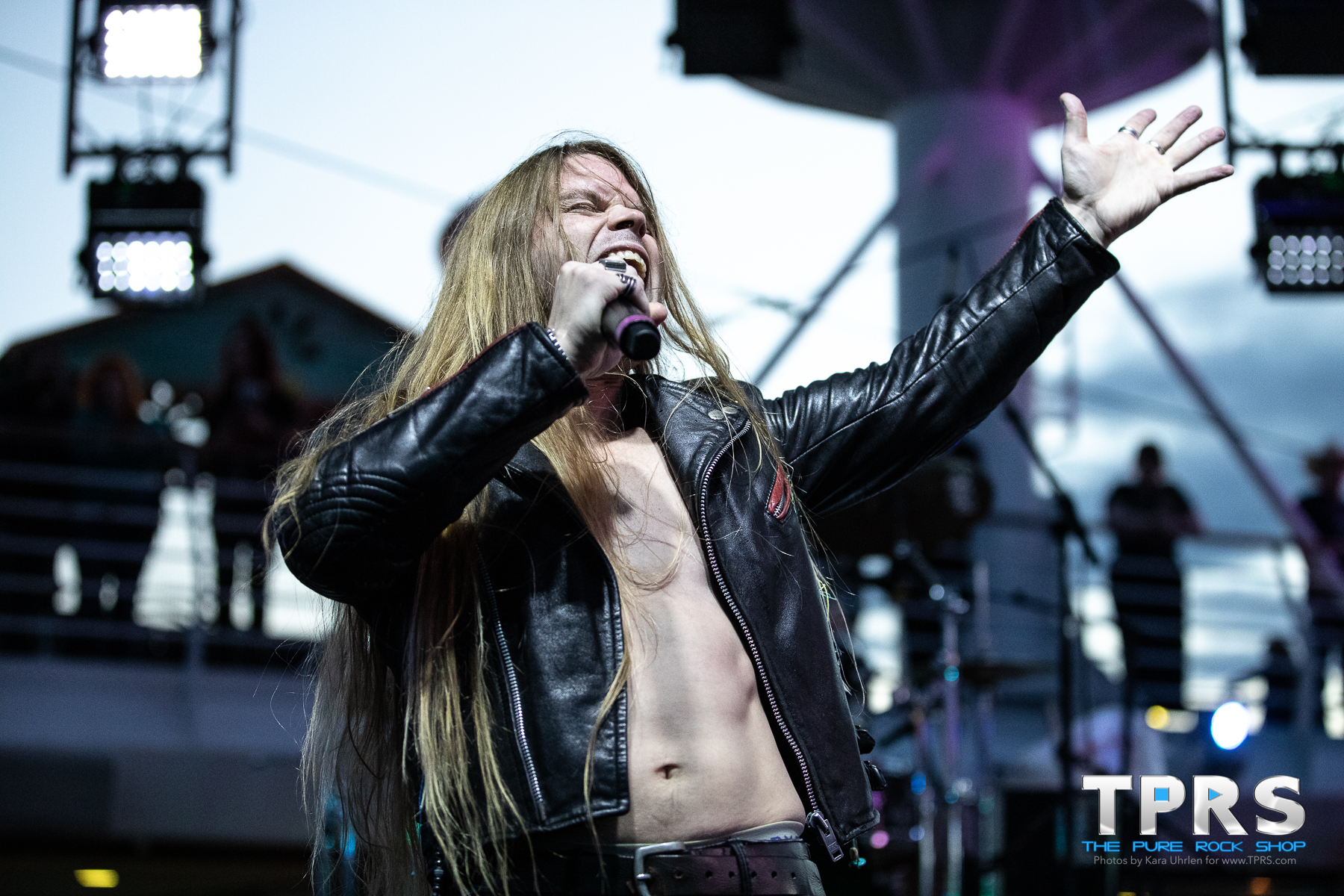 For those looking to slow down for a bit there are always fun distractions from full stage shows like comedy, jams, or the Dueling Pianos with Vixen’s Tyson Leslie and Will Doughty at the Schooner Bar, which we checked out on day one before kicking it with Buckcherry for the second time this week (having caught a bonus show pre-cruise in Orlando). 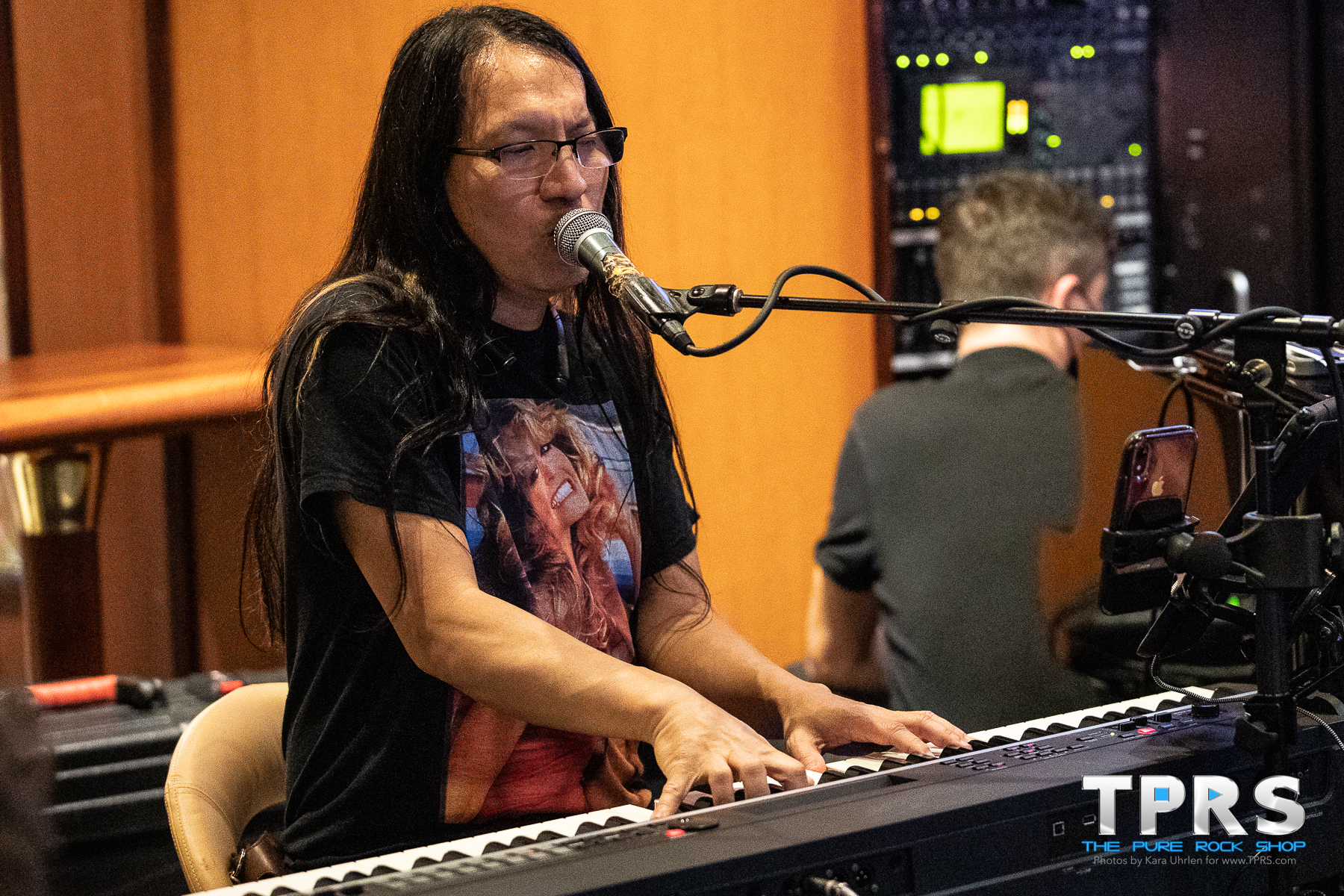 While it appeared that Stevie D. was making fun of catching on to using his “sea legs,” Buckcherry was dancing up a storm in the Royal Theater that first evening (and again on the pier at Coco Cay for that matter). In fact, I asked frontman Josh Todd for some dance moves after finally getting a chance to watch these guys somewhere other than a club-sized venue for once.  He offer up that I should watch James Brown, because apparently that’s who he studied to get so smooth. 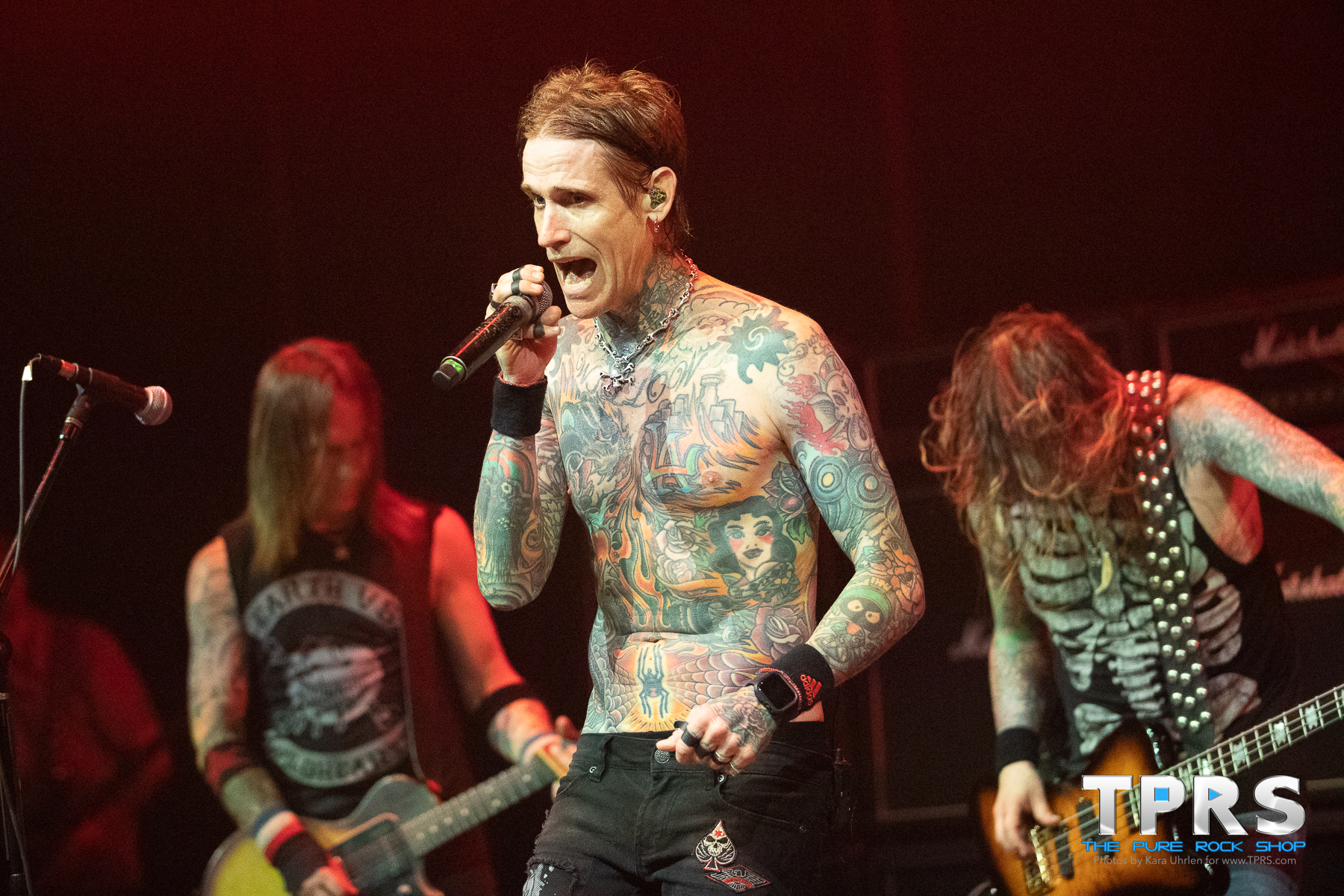 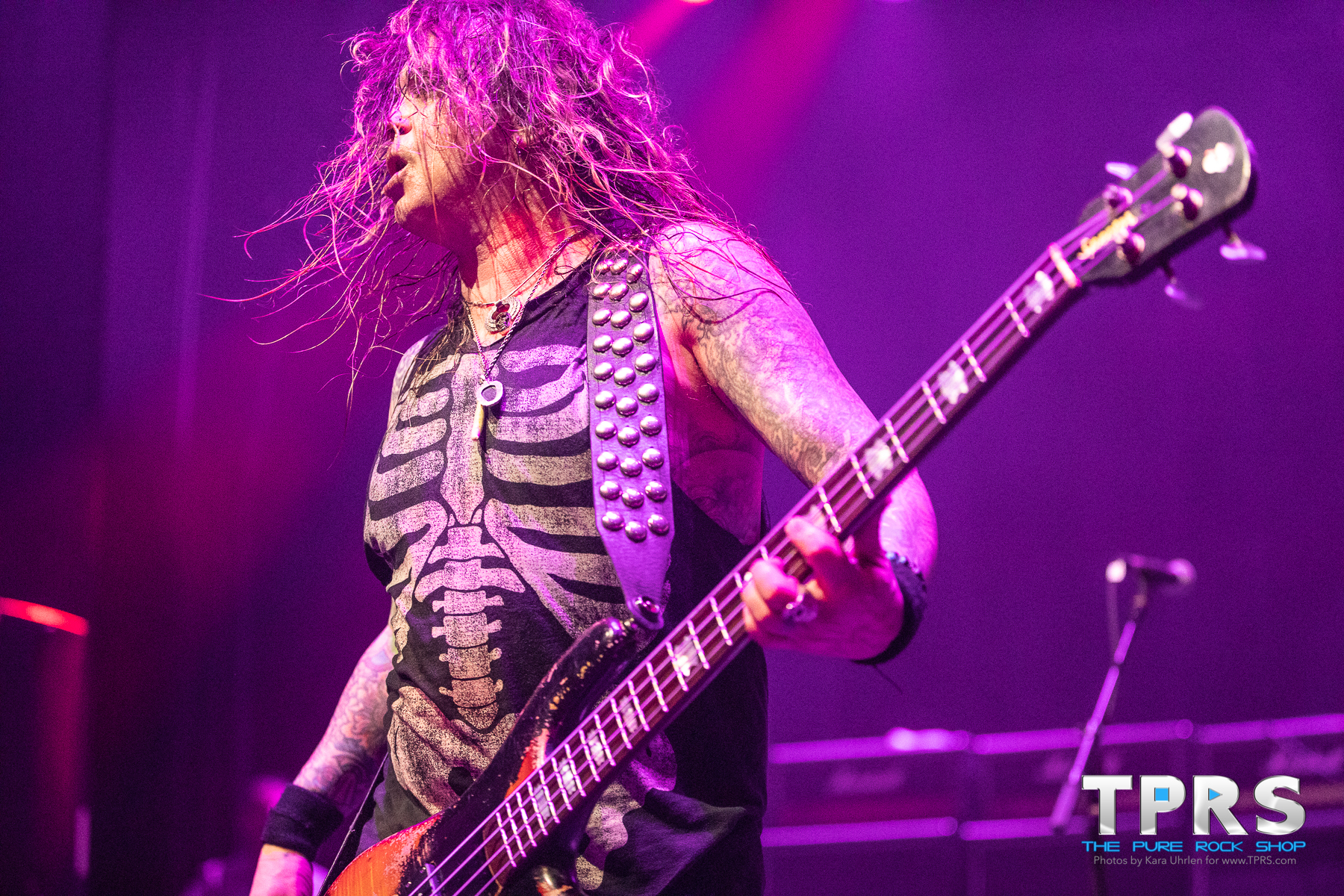 Buckcherry was new to the cruise and some questioned how they fit in. Well, for starters, they have Billy Rowe (Jetboy) on guitar these days who last joined MORC in 2019, and Francis Ruiz behind the drums, who some may remember from the trio he formed with Poison’s CC Deville, Samantha 7. Still not convinced, I’d encourage you to groove along the extended version of “Crazy Bitch” and let them pull on your heart string with “Sorry,” because I for one, can’t ever get enough of this band. Luckily, we can find them on the road with cruise headliner Alice Cooper next month. 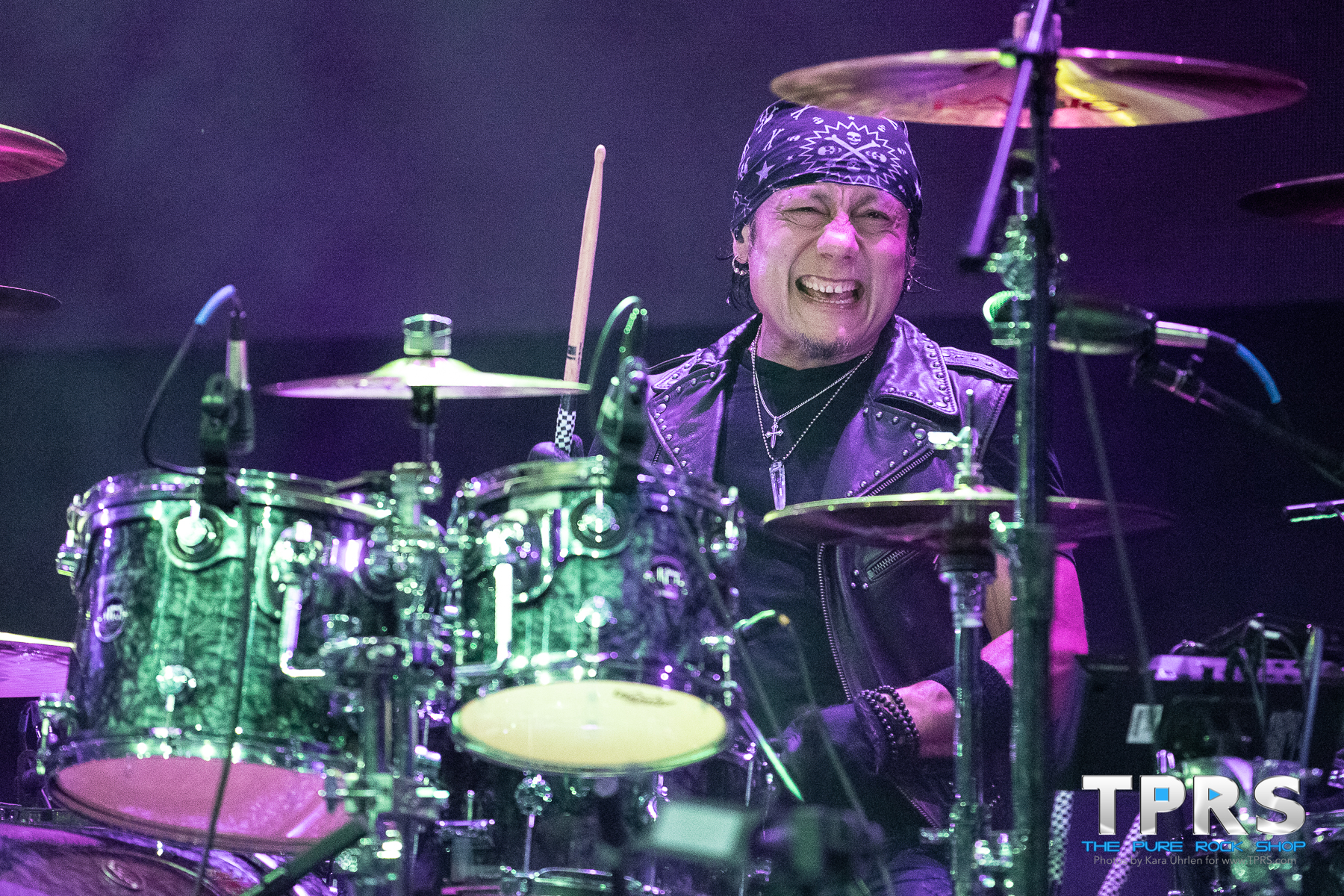 Speaking of Cooper, let’s stick our tongues out for his bass player Chuck Garric and his lovely daughter Calico Cooper and their band Beasto Blanco, who fought their way through customs to bring us lasers, pyro and more with their welcomed return to the MORC.

The first show in Studio B seemed a bit cramped as Chuck and Calico were joined by guitarist Brother Latham, bassist Jan LeGrow and drummer Sean Sellers. Not to worry, however, as they brought out the big guns (literally) for the pool stage show after Alice Cooper’s second performance. Perhaps giving Chuck a little time to catch his breath, and mom and dad just enough time to come watch their girl kick ass. 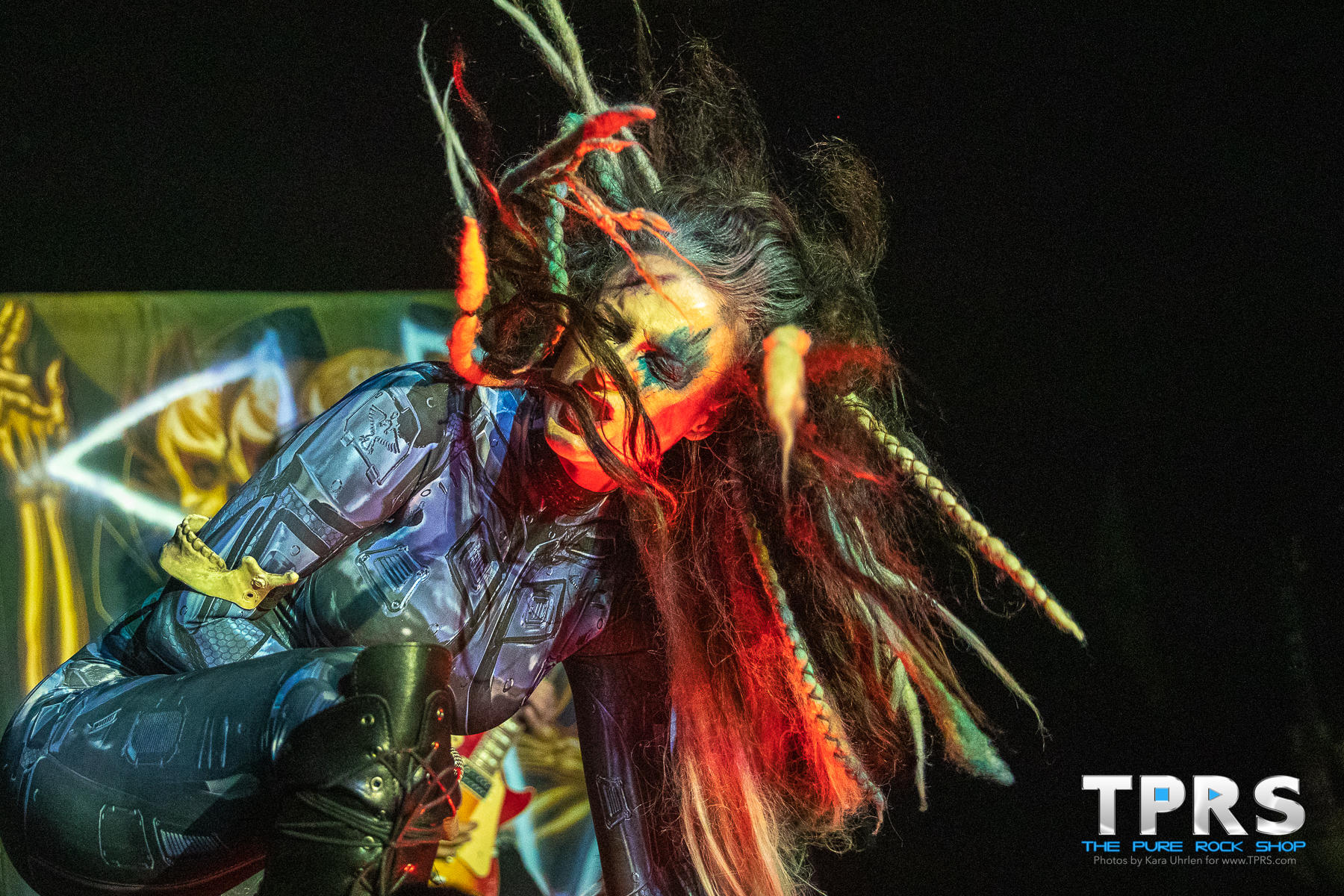 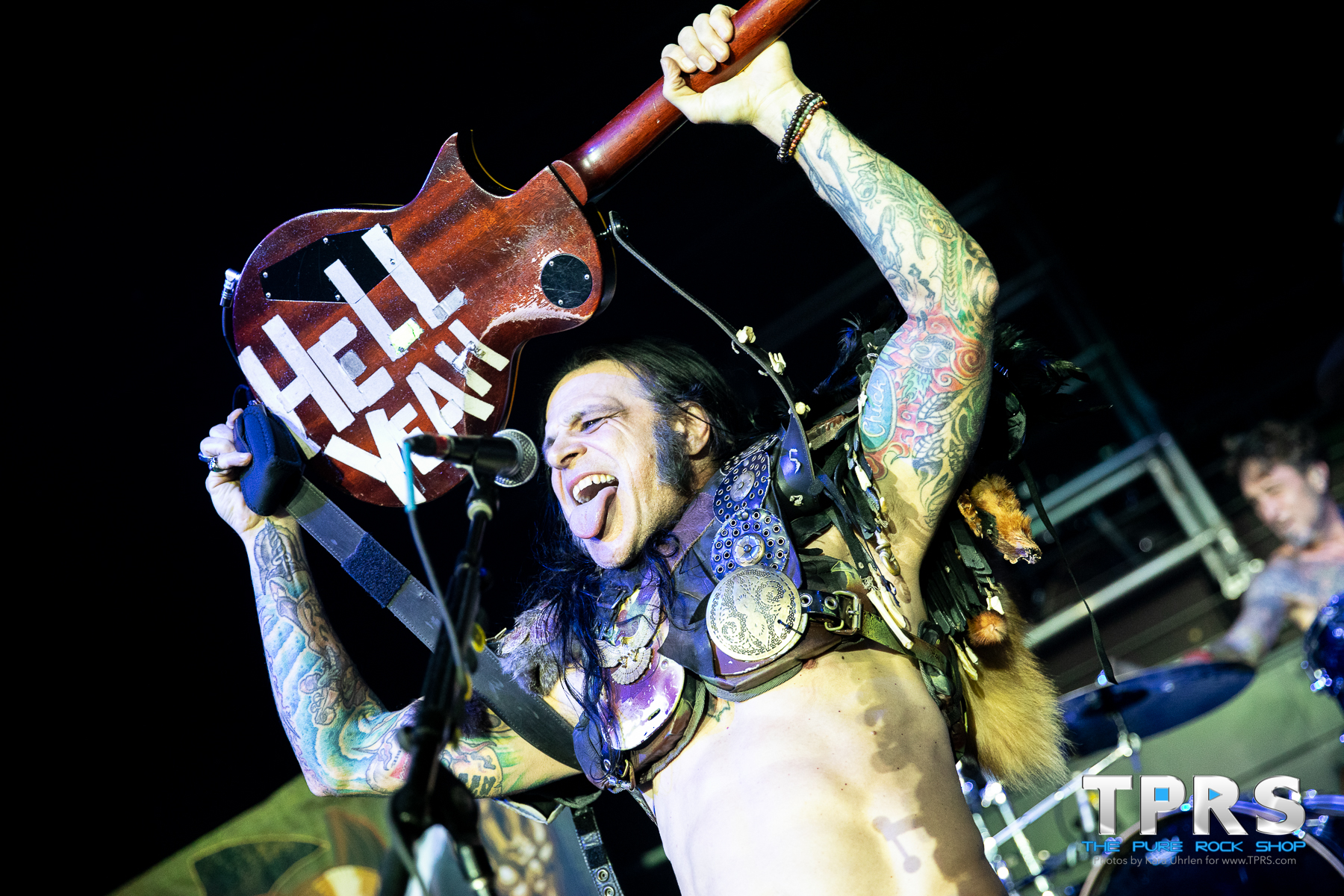 As day one continued, yet another surprise was waiting for us on the pool deck. Ted Poley, who was already scheduled to front supergroup Tokyo Motor Fist again this cruise, brought his own solo band with him for a set of Danger Danger favorites like “Bang Bang,” “Don’t Walk Away,” and “One in a Million.”

The Freedom was full steam ahead to the Bahamas so no fans were necessary for that wind-blown look, and there certainly wasn’t a Covid bubble in play here as Ted paid his regular visit to the crowd for hugs and selfies mid-set. 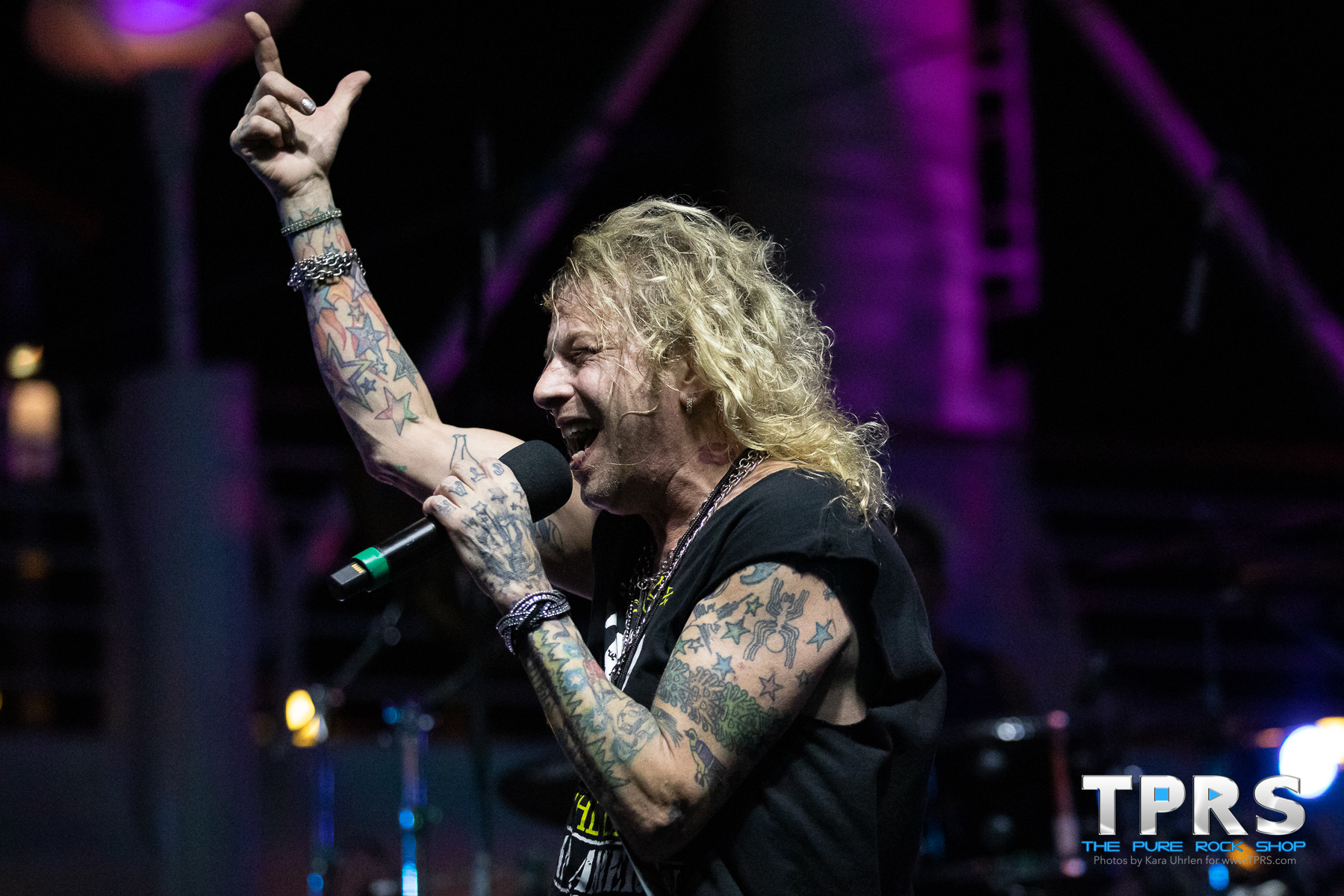 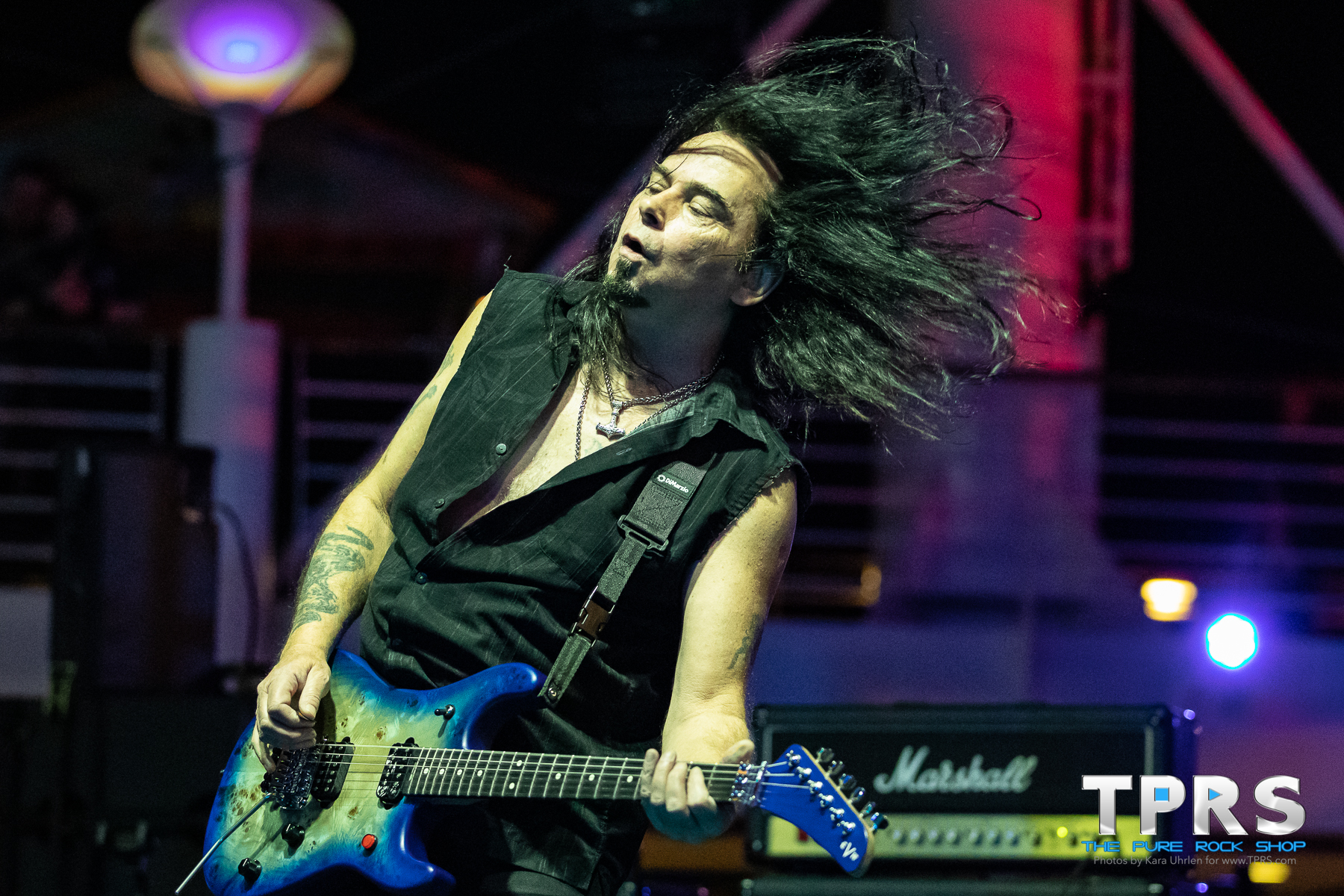 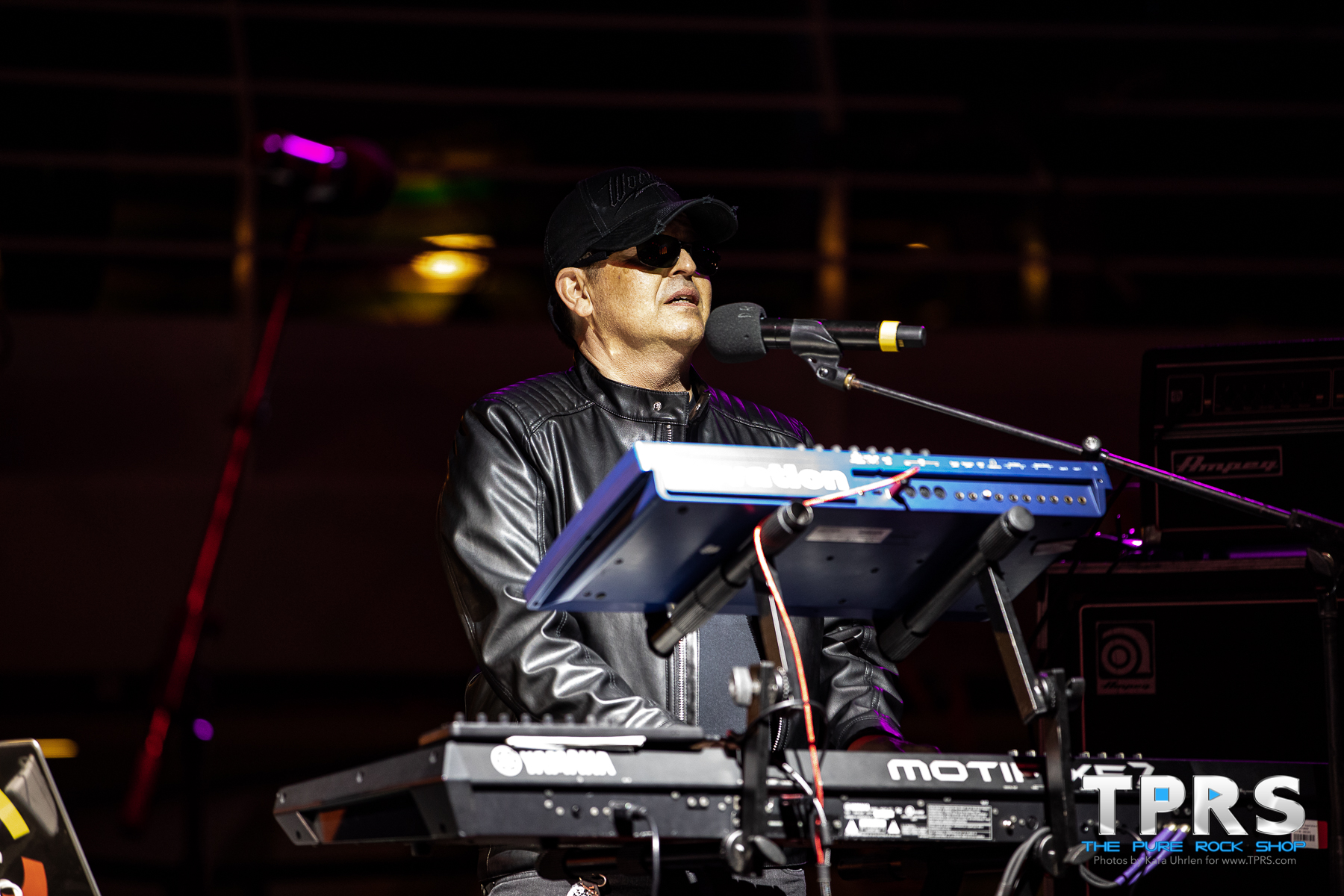 The band that really surprised most was a three-piece featuring Jacob Mofo, Vega Vega, and Danny Spasov from Spain called Stop Stop, who performed their first set in the dreaded star lounge.  Had it not been for their friends and former tour mates Tony Dickinson and Jeff Scott Soto filling me in, I may very well have missed the fun…

The lack of views in the crowded room didn’t stop these guys from engaging the audience.  In fact, they decided to bring the party into the crowd as they performed their anthem from the middle of the room.  It was great catching up with them on the pier and over pizza the next night with the SOTO band.  I heard that they also killed it in the theater and sold out all of their merchandise.  Definitely hope to catch up with these characters again soon. 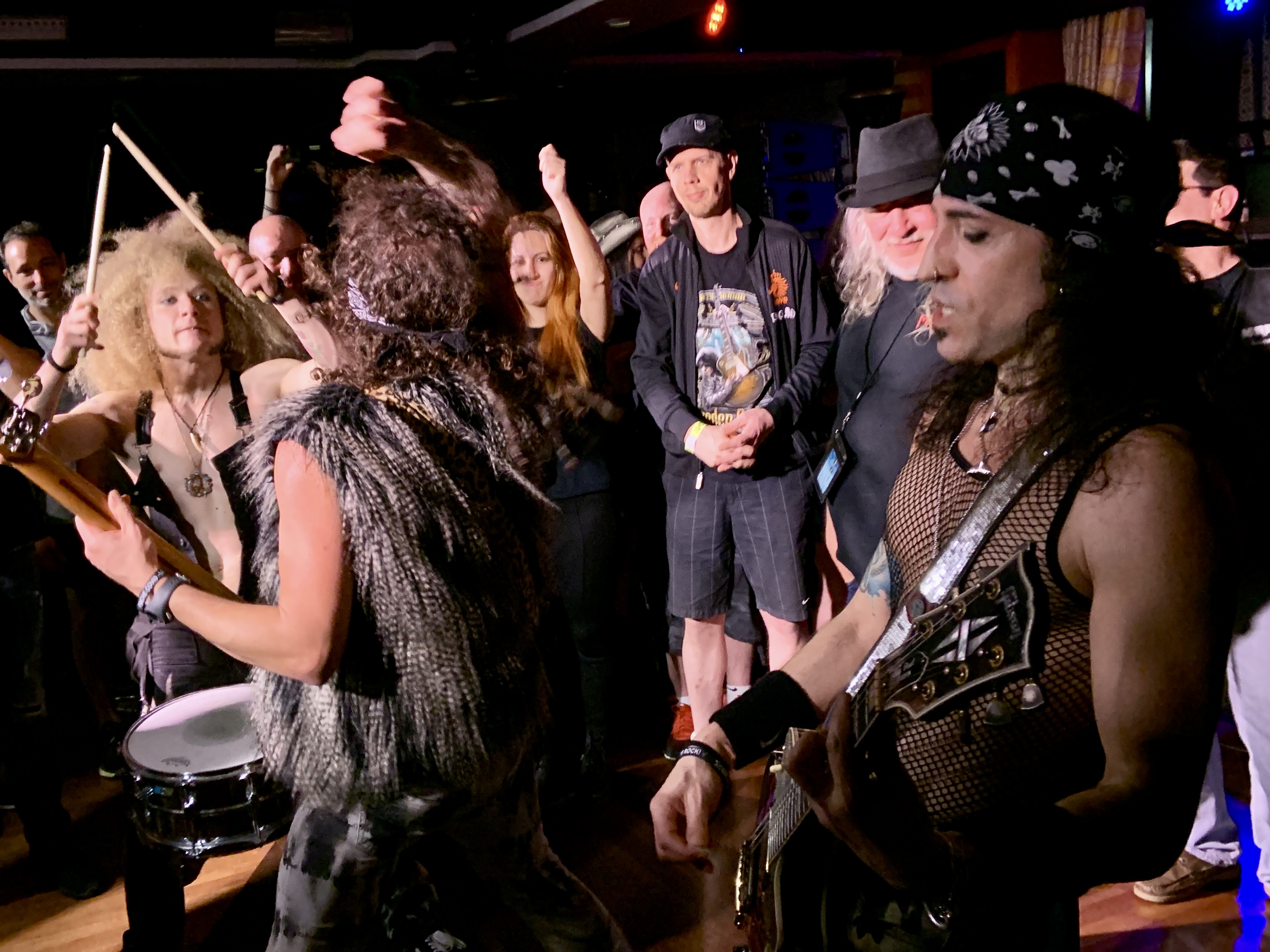 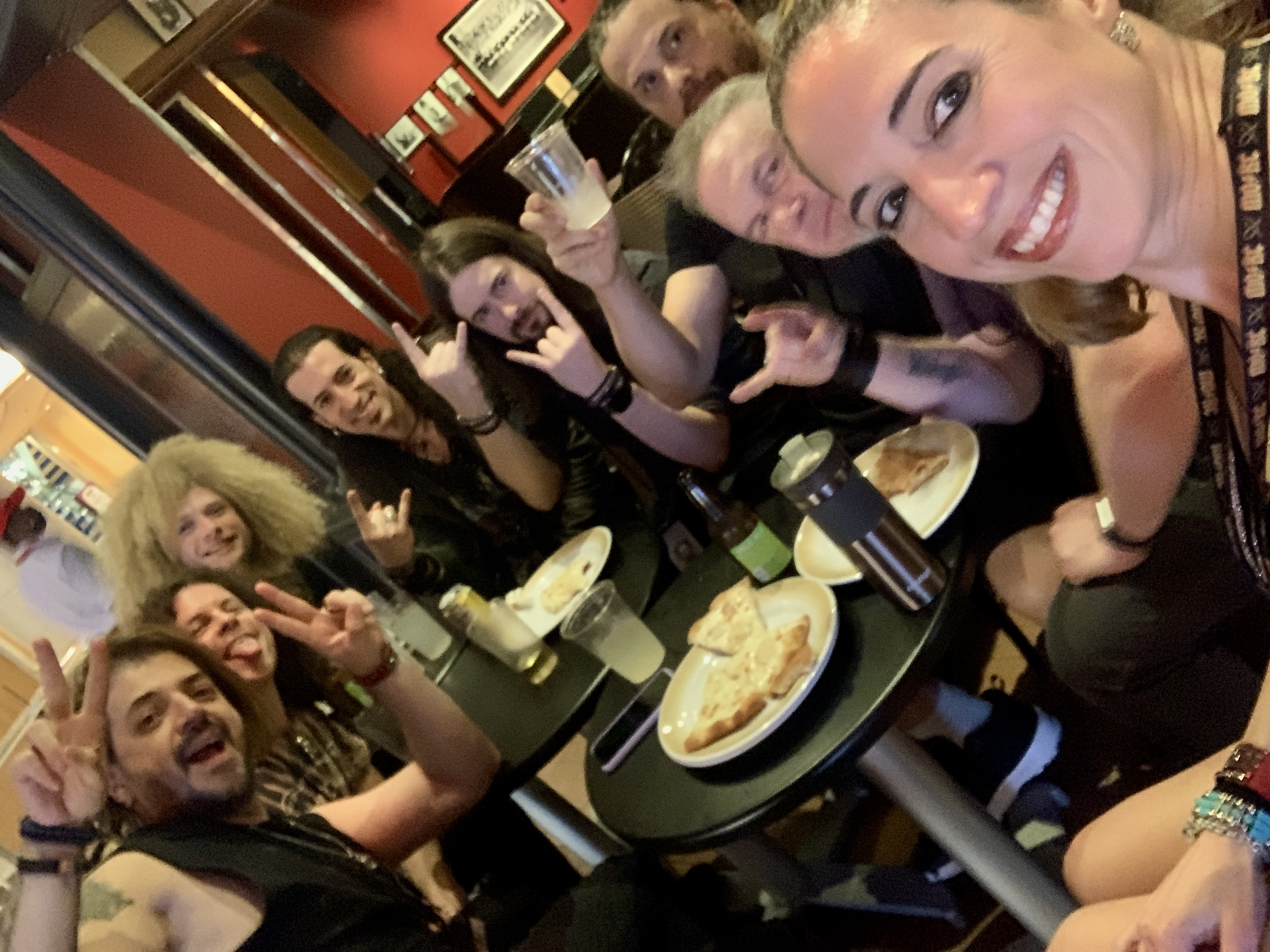 While Tesla didn’t perform on this cruise, they are already locked in for 2023 out of Port Canaveral next April, but there was perhaps a mini-reunion in play as bassist Brian Wheat was on board to showcase his artwork along with Def Leppard’s Rick Allen. 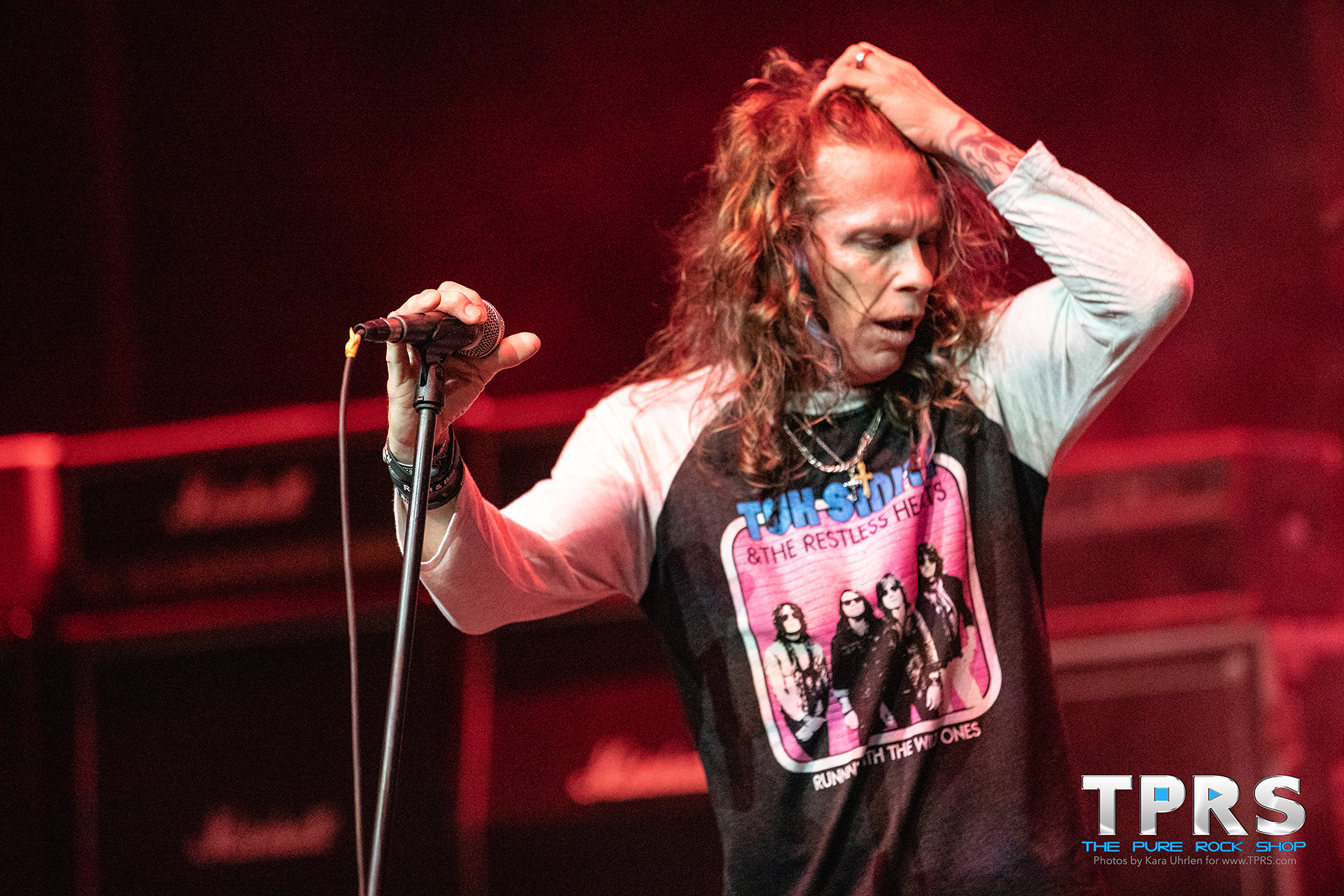 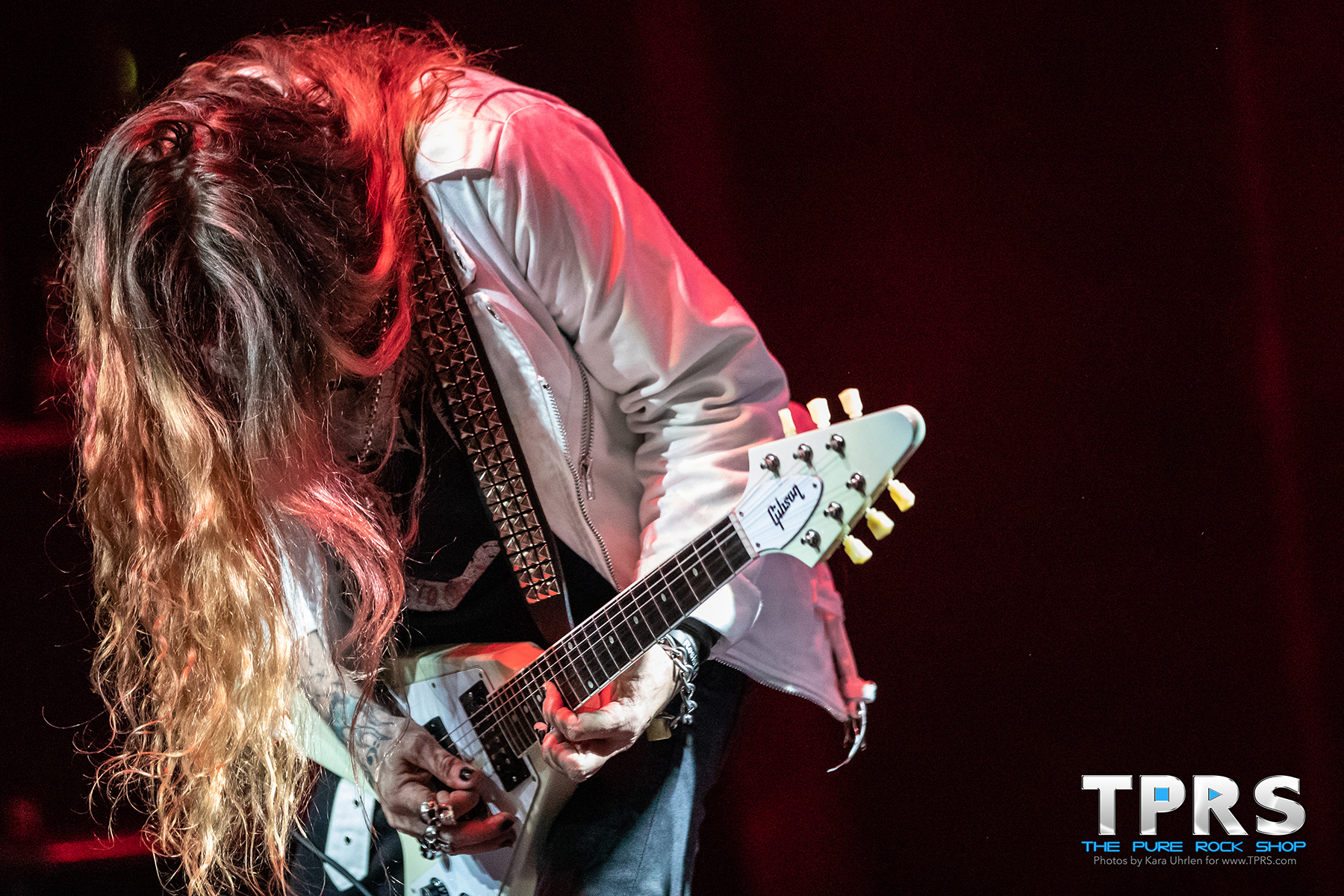 I know many would have called it a night, but I couldn’t skip a long-time Swedish favorite, Electric Boys before catching a late night snack and ultimately heading to bed…I arrived late as they hit the stage in unison with Resist & Bite. Luckily, the set was delayed a bit, as were most shows as the venues worked out first-day kinks. In fact, the queue for KIX earlier in the evening turned into quite the party on the stairs after an hour delay leaving some wondering where they should go next and others the opportunity to catch up with friends.

While their sets ended with the one everyone knows “All Lips N Hips,” the Electric Boys did not disappoint with favorites like “Psychedelic Eyes,” and of course “Mary in the Mystery World.”  We’ve seen these guys strip things down before on the boat and even jam with John Corabi, but catching two full sets was definitely a treat.  Founding members Conny Bloom (guitar and vocals) and Andy Christell  (bass and vocals) were joined by Jolle Atlagic on drums and Martin Thomander on guitar.

I was definitely taken back as they offered up the songs that I used to dance around my room to in high school, and elated to learn that one of my personal favorite’s “Groovus Maximus,” the title track from their 1992 release, would make it into their second set in Studio B.  Continuing to draw from influences like Hendrix and the Beatles, the band is now on their seventh album, Upside Down. 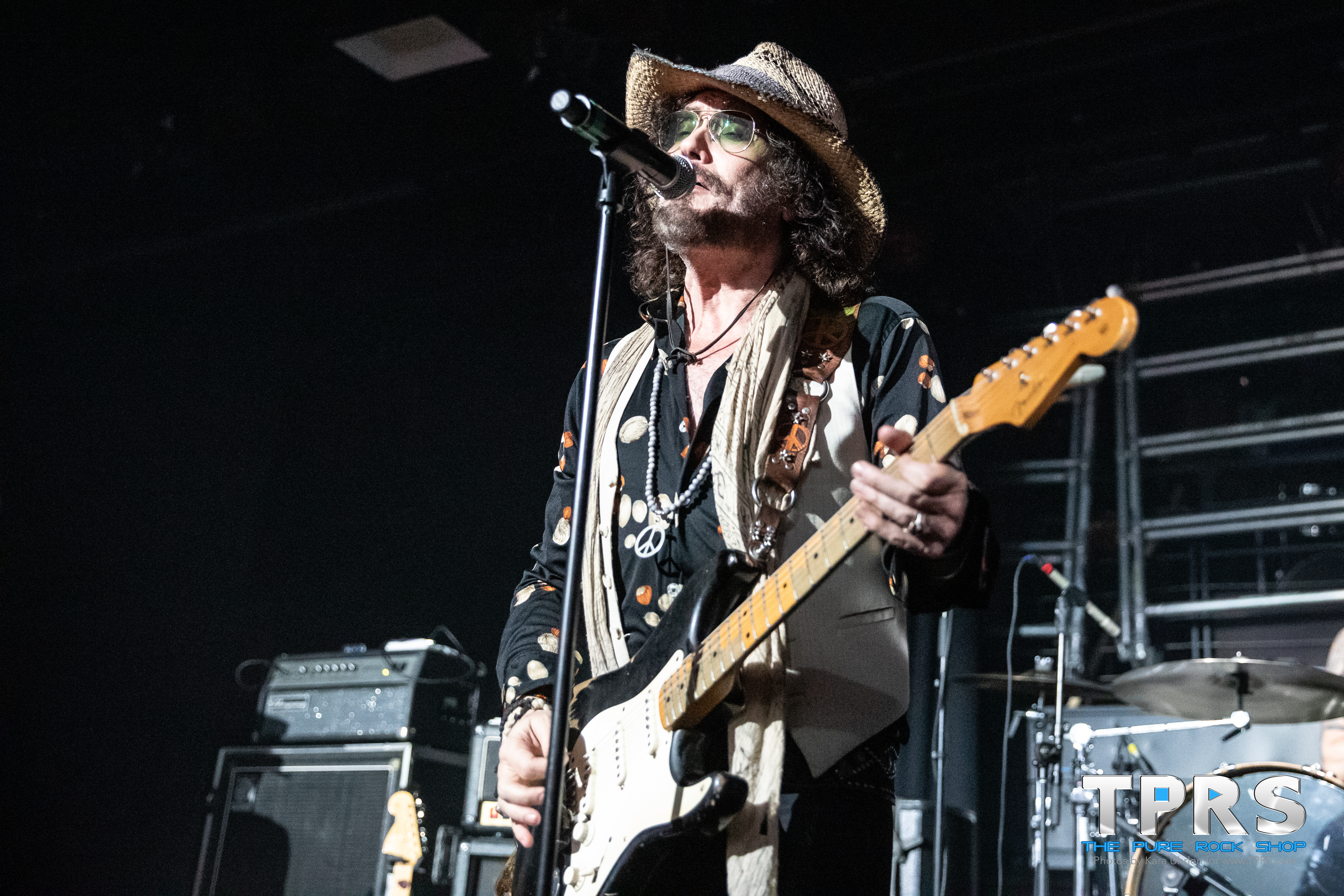 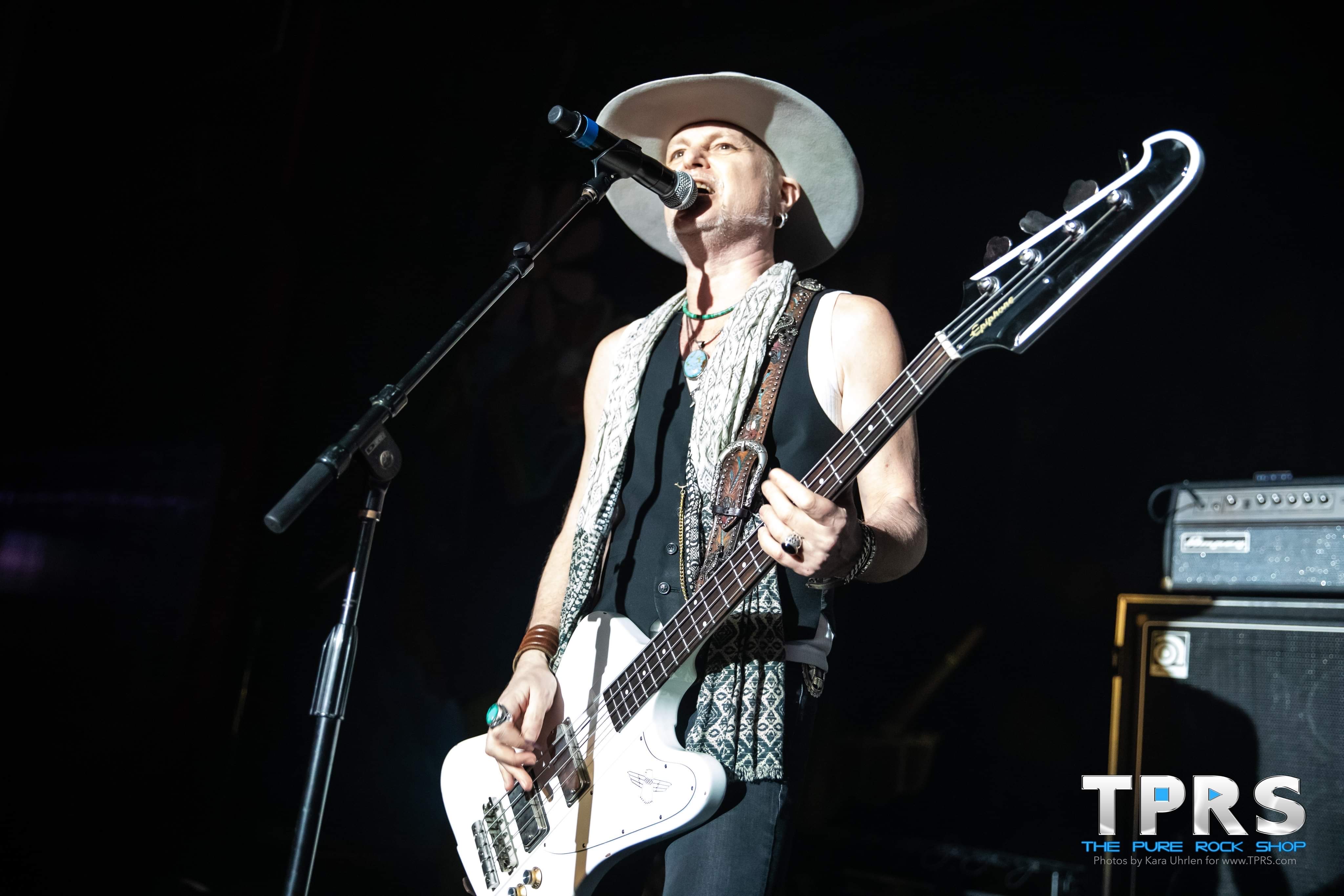 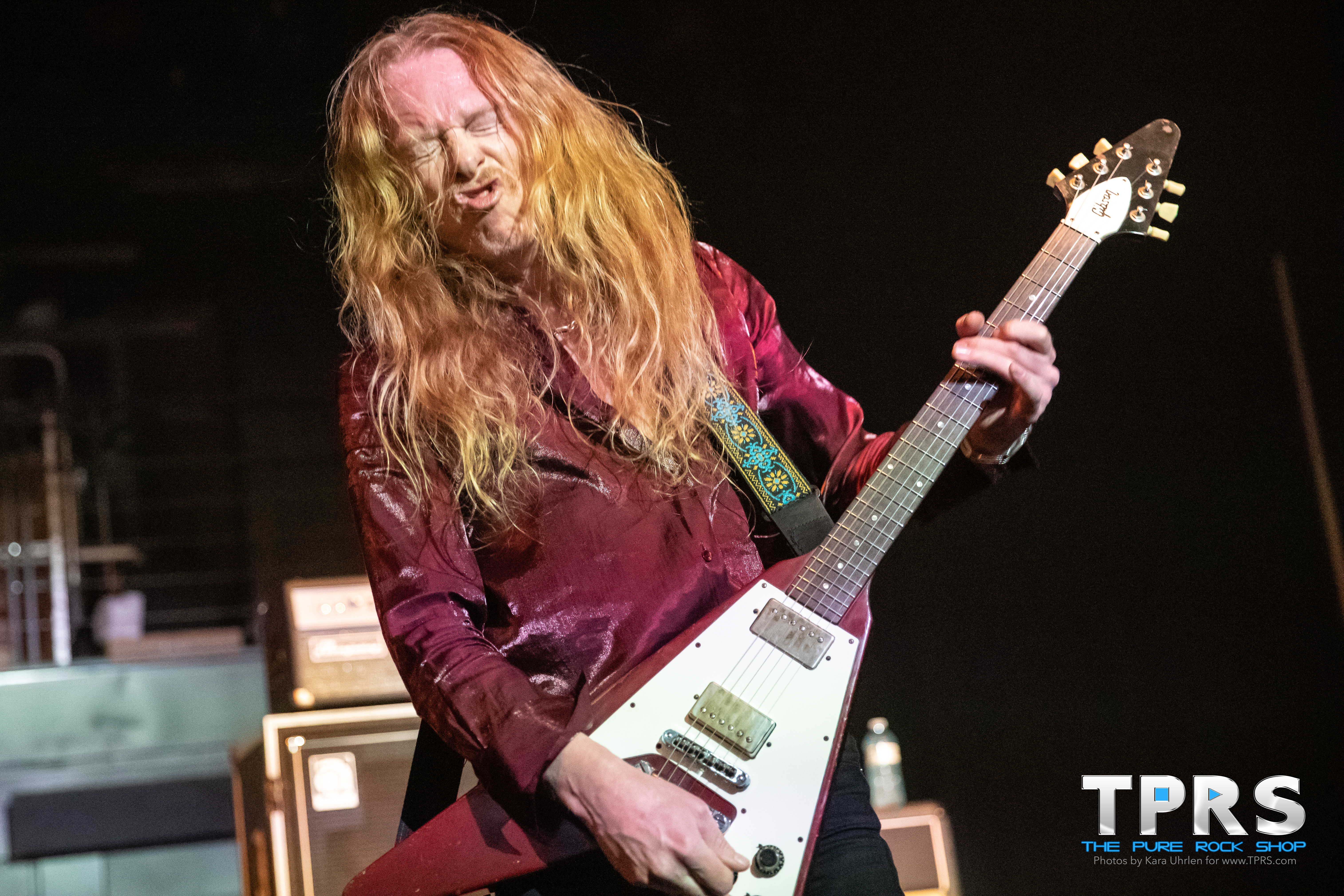 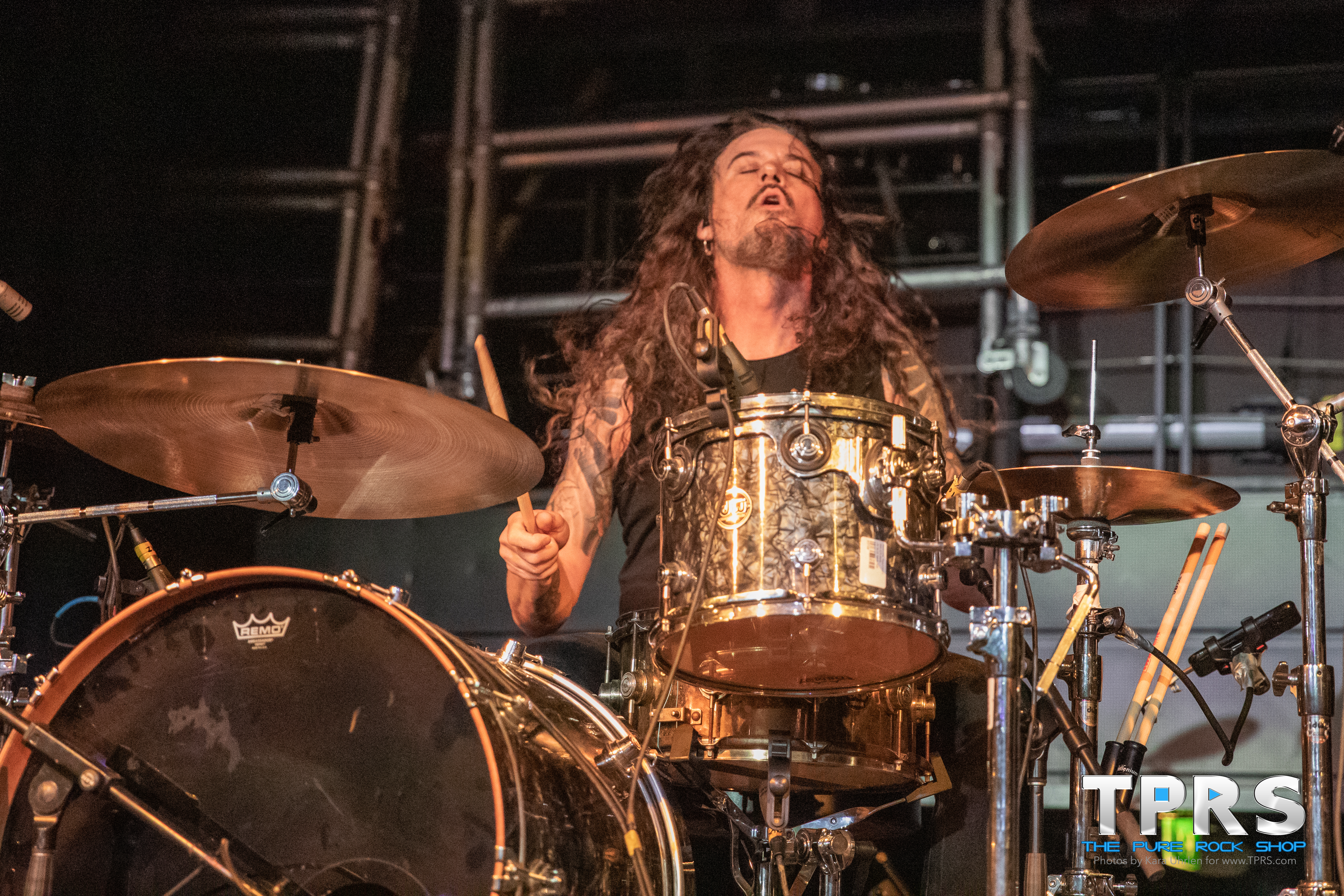 While overlap and multiple-stages are intended to keep us busy from dawn to dawn, it can be a challenge to catch everything as it unfolds especially if you plan to take advantage of the endless food options, visit with friends, or actually catch some shut-eye.  Luckily most bands will perform twice.  Misses for day one included Jeff Scott Soto & Jason Bieler, KIX, Killer Dwarfs and Richie Kotzen. But not to worry, I caught all of them at some point on the boat. Check out our recap of the pre-party from Magic City Casino, and coverage from the second day at Cocoa Cay.