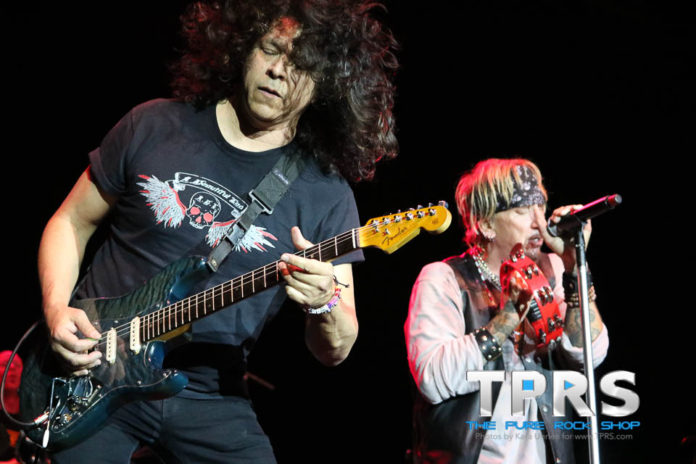 The Rock the Arena event in Toledo, Ohio at the Savage Arena, may be the University of Toledo’s way of encouraging alumni to visit the campus again, but for the hard rock fan, this is a dream come true with 10 hard rock groups under one roof costing as little as $39 a ticket.  In follow-up to the sold out success of last year’s event, Rock the Arena II kept it’s promise of hosting ten bands, even when Lou Gramm cancelled calling for last minute schedule changes. 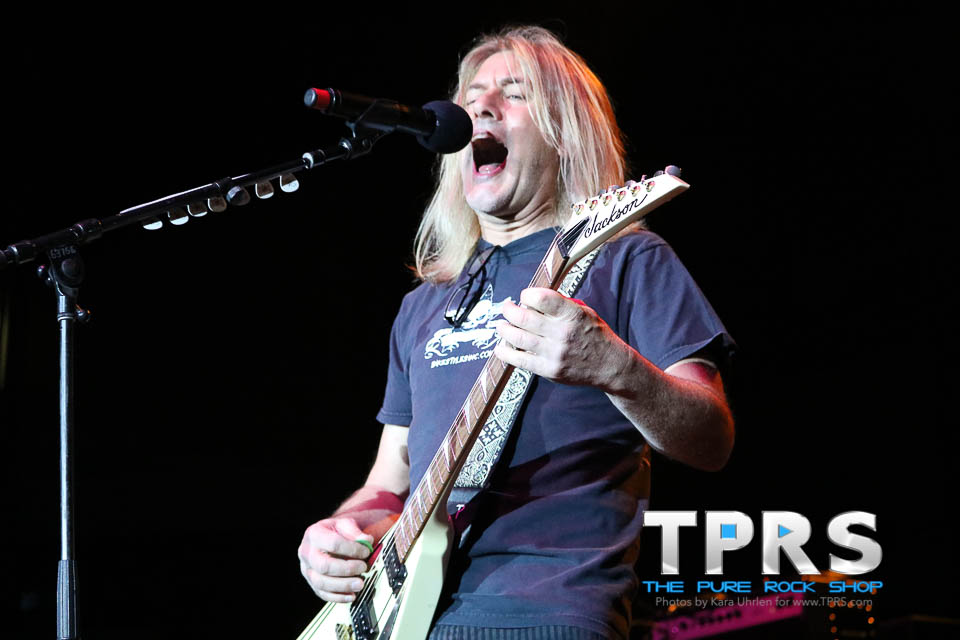 With Lou Gramm Band no longer on the bill, we were treated to an opening set with some fresh new music from Ohio natives Billy Morris / Sunset Strip who started the Rock The Arena ll off at U.T. Savage Arena with material from the band’s upcoming album.  Fans may recall Billy Morris from his time on guitar in WARRANT or more recently in Stevie Rachelle Tuff (who performed on the Monsters of Rock Cruise last October). 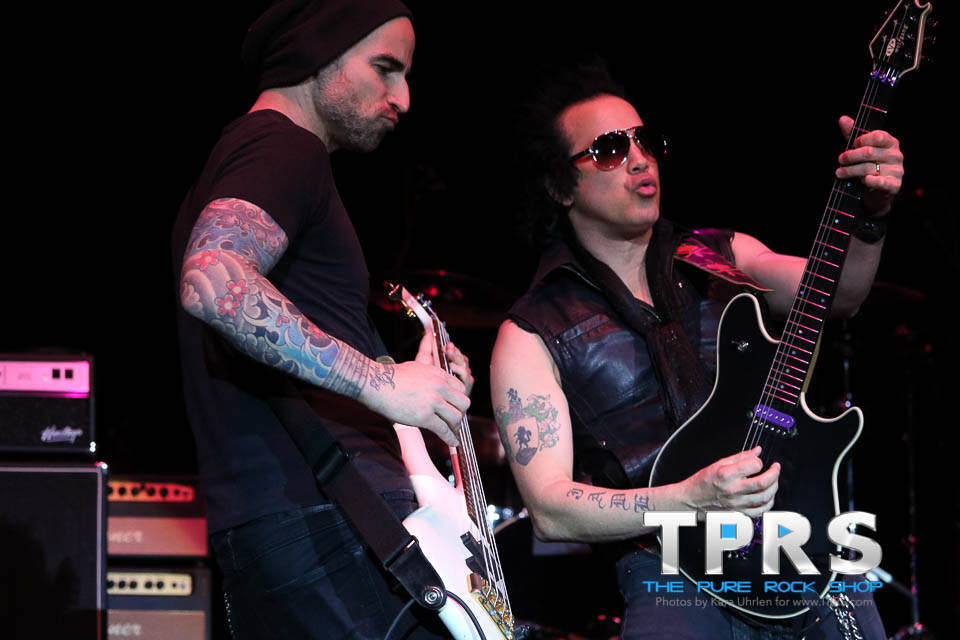 In follow-up to a show with Warrant With Special Guest Trixter the day before in Akron (which sadly we missed), TRIXTER helped start the day Rock The Arena ll with a short set that was packed with favorites from the 90’s like their big hit “Give it to me Good” and other fun cuts like “Rockin’ Horse” from their second album.
Missing from the quartet was vocalist Pete Loran, but guitarist Steve Brown took over on lead vocals with all the charisma you’d expect from a frontman. 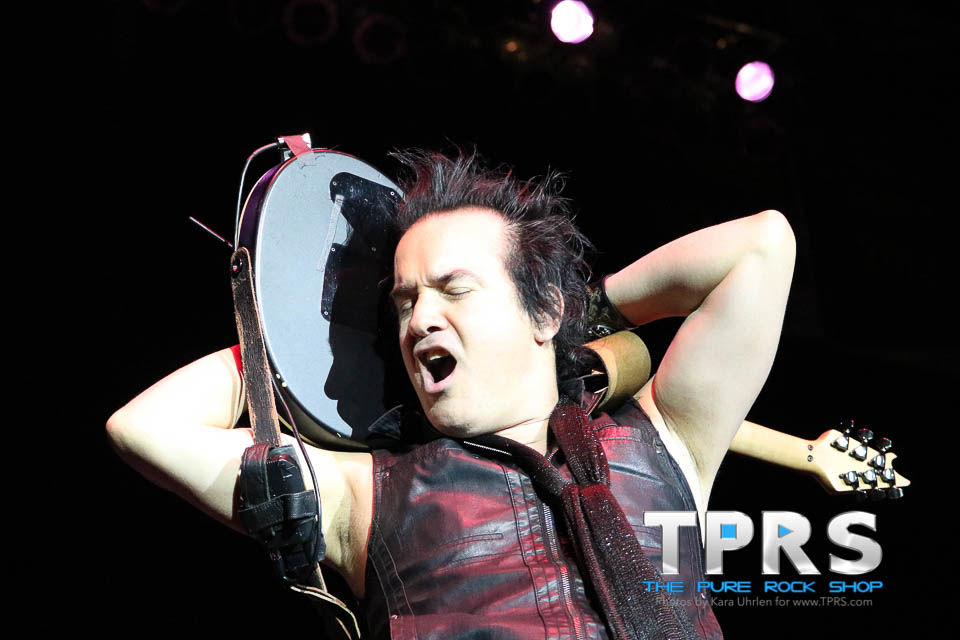 Brown got a little help from Billy Morris on guitar who seemed to be learning on the job, but giving Brown the much needed chance to break away from the mic long enough to show us some jumps and wake up the crowd. And, of course holding down the rhythm section as always were bassist Pj Farley and Mark Gus Scott on drums.  Those who were there before the lights went down event got to see Steve and Billy having some fun with playing Van Halen during a last minute sound check! 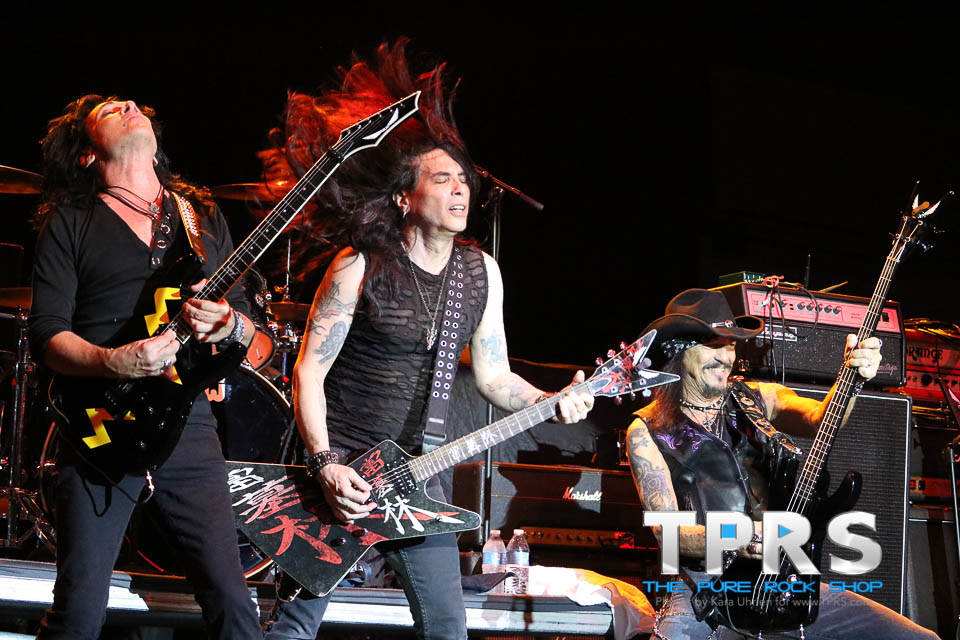 As the day went on, the sets got progressively longer with Autograph up next, featuring arena quality choreography and of course that arena ready hit from the 80’s “Turn Up the Radio” with Simon Daniels (Jailhouse, Flood) on lead vocals and guitar, Steve Lynch on guitar, Randy Rand on bass and Marc Wieland on drums. 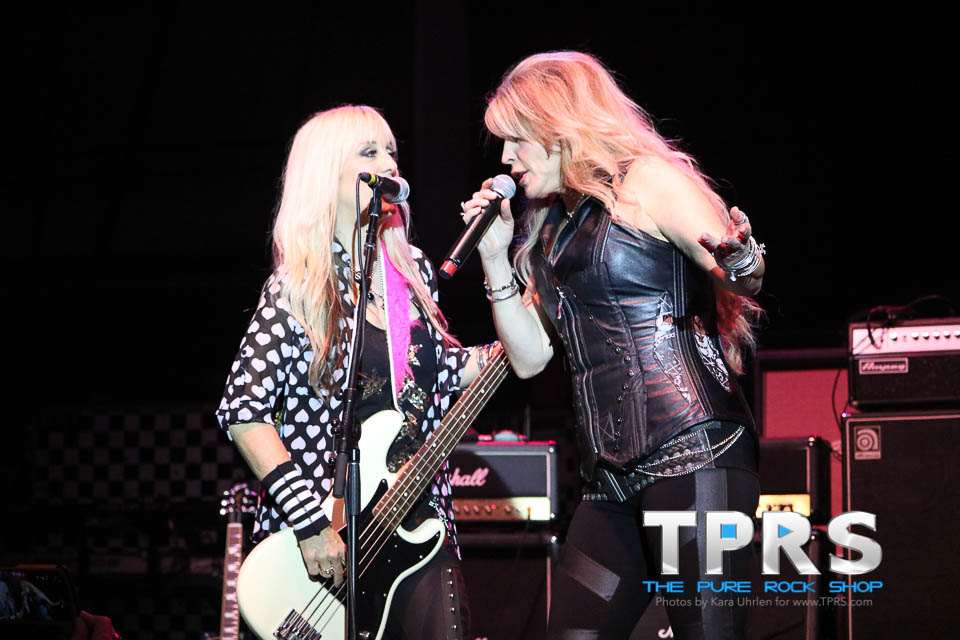 Then, the all female glam rock band Vixen who recently added their first male member keyboardist Tyson Leslie was up next with favorite’s like “Edge of a Broken Heart” featuring three original members Janet Gardner, Share Ross, Roxy Petrucci who were joined by new addition Brittany Denaro on her first show with Vixen.  Britt also performs with another kickass all-girl band Paradise Kitty – All Girl Guns N’ Roses Tribute Band based out of Los Angeles. 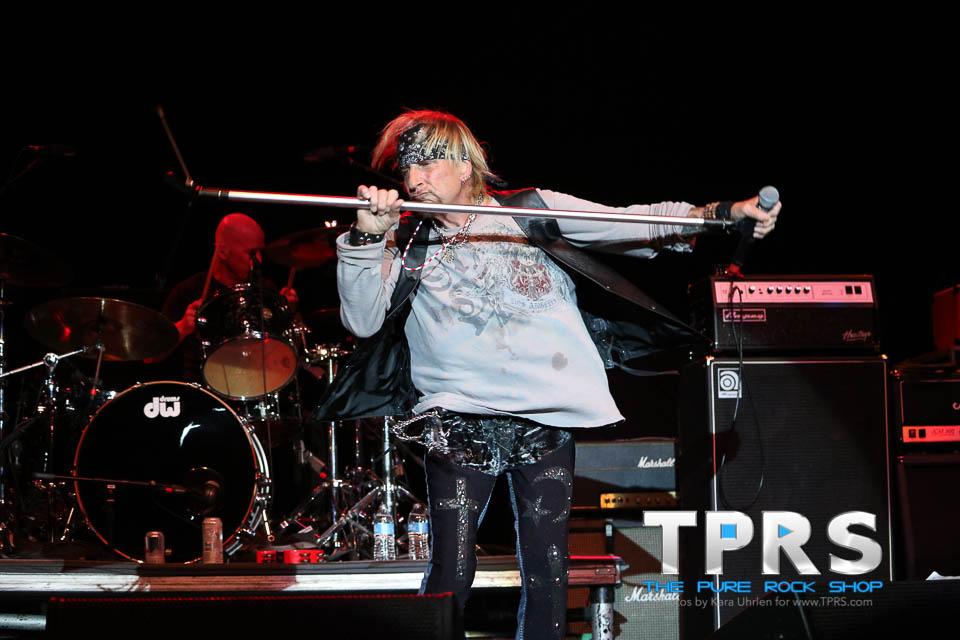 Longtime friend of The Pure Rock Shop, Jack Russell was up next.  Jack may have parted ways with his longtime partner in crime Mark Kendall Official but he is still rocking hard with his new songwriting partner guitarist Robby Lochner, Great White [Band] bassist Tony Cardenas-Montana (who is now playing guitar and keys), Dicki Fliszar on drums and Dan McNay on bass.
Jack told us how excited he is about working with Robby, and when asked if he was feeling a little Alice Cooper influence in addition to the expected Led Zeppelin vibe with the new album, he said it wasn’t intentional but he is a huge Alice fan and even used to go to school dressed in the full Alice make-up! 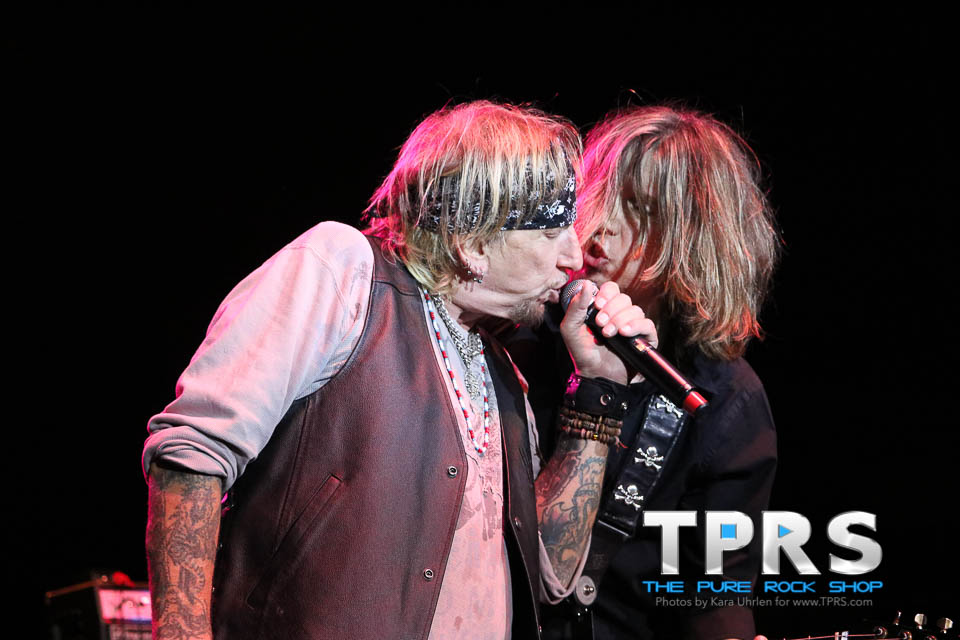 Jack Russell’s Great White brought out the old school favorites from “Mista Bone” to “Once Bitten, Twice Shy” and new track “My Addiction” from their album “He Saw it Comin'”. But, what really pleased fans was how the band hung around at the merchandise booth to greet anyone who wanted an autograph or photo. 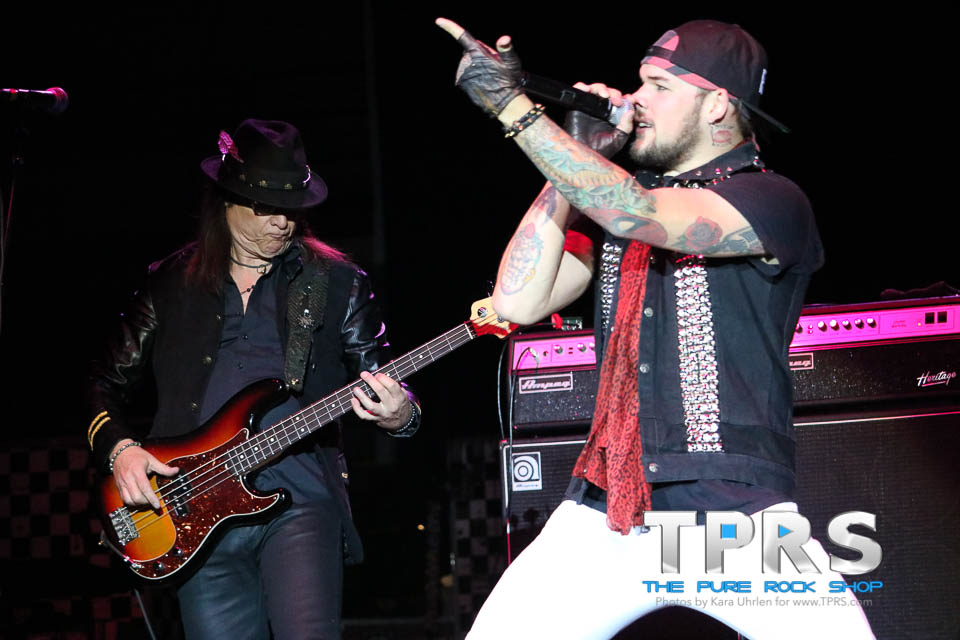 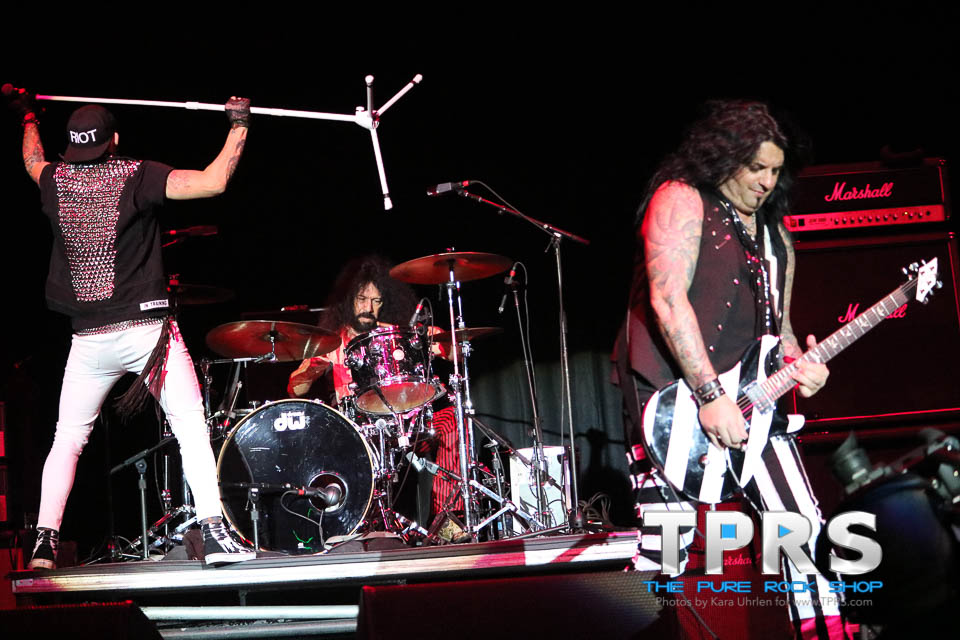 Durbin has obviously been watching the antics of Pearl and the late, great Kevin DuBrow (who was honored along with Randy Rhoads during “Thunderbird”). Durbin had the moves down and the vocal range to meet the challenge. Consequently, the band was met with a standing ovation and roar of the crowd as they finished with “Metal Health (Bang Your Head)” mid-day. 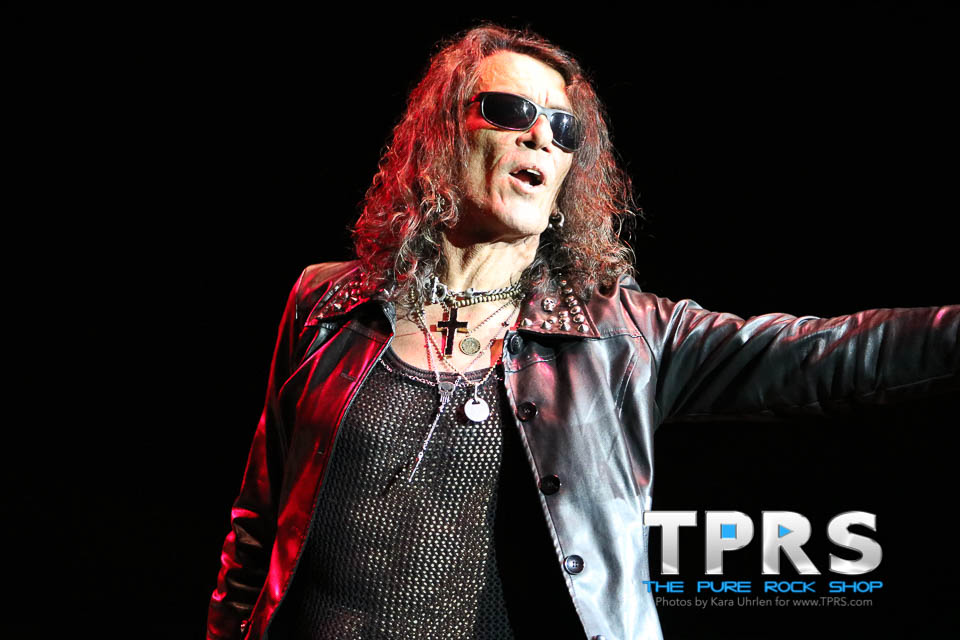 Another frontman working on his own these days is Stephen Pearcy who is out on tour in support of his solo release “Smash” on Frontiers Records which delivers more of the gritty rock we’ve come to expect from the original singer from RATT. Hot on the heels of solo performances in Kent and Cincinnati, he performed mid-day in Toledo. 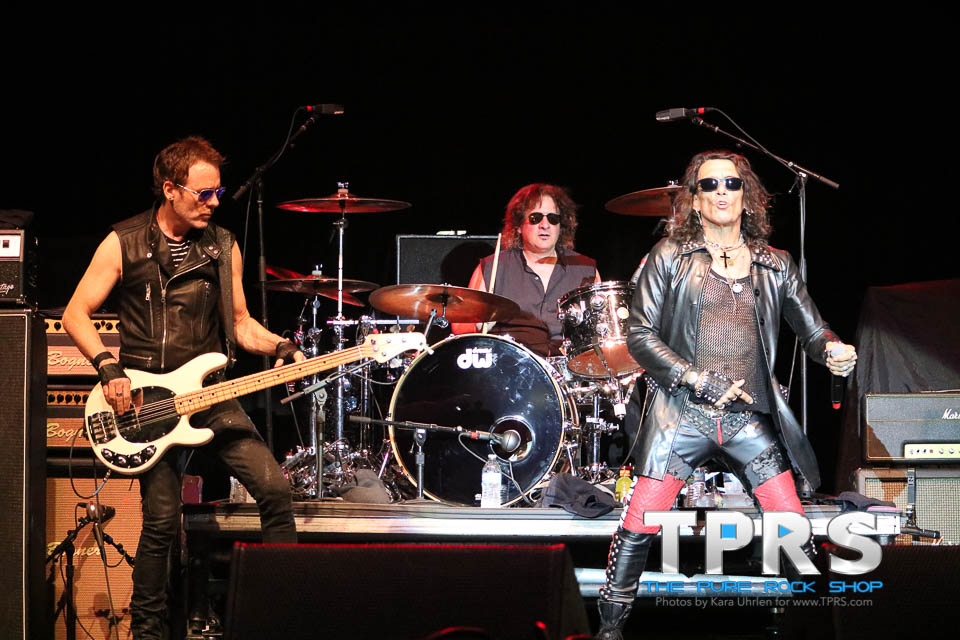 Clad in leather from head to toe, Pearcy stuck mostly to our RATT band favorites like “Way Cool Jr.” and “Round and Round” during his performance at Rock The Arena ll with appreciation from the growing crowd.
Joining Pearcy were Gregory D’Angelo who of course was also the drummer for the classic line up of White Lion and in Zakk Wylde’s Pride & Glory trio along with James Lomenzo (before Brian Tichy took over on drums), Erik Ferentinos on guitars and Matt Thorne handling bass duties. 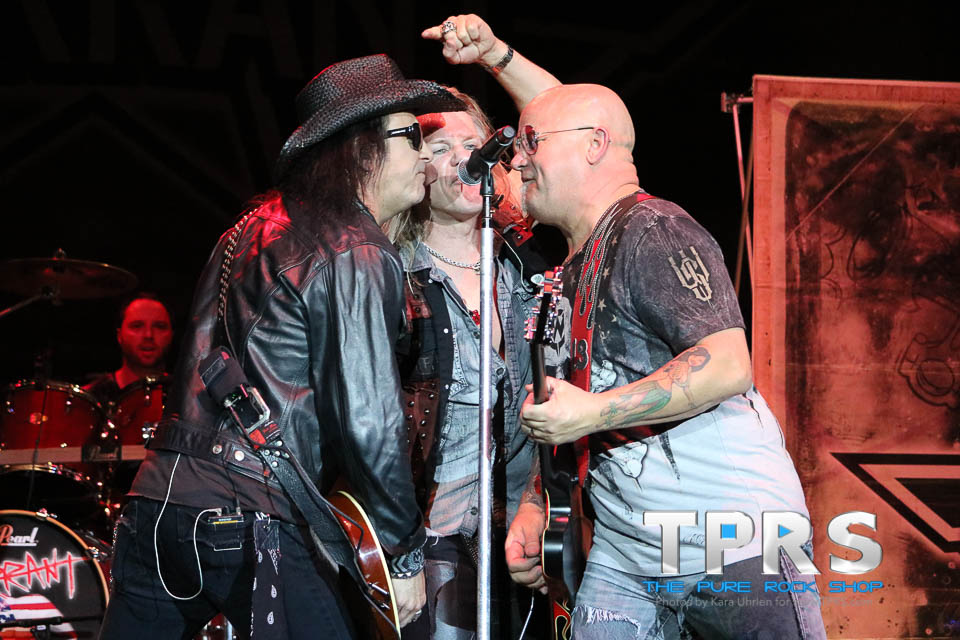 And, on the road gearing up for their new release Louder – Harder – Faster, WARRANT followed up their show in Akron with a performance at the Rock The Arena ll event.

The Down Boys Jerry L Dixon, Joey Allen and Erik Turner were joined by Robert Mason on vocals.  However, we were very surprised to notice Steven Sweet missing from the drum kit, but were hearing his vocals.  Sure enough, Steven was hiding in the shadows off to the side stage providing background vocals for the band only jumping out once to bang on the kit.  So what’s the story?  We asked Steven and we’ll let him take it from here:
“I’m so glad you noticed me!  I had shoulder/bicep surgery mid December and am off the drums for about another month. Fortunately I’ve been able to hit a few shows to sing from the sidelines until I return to drumming AND singing. Chris Beall is a good friend from Erik Turner’s neck of the woods (Temecula, CA) who does a great job of filling my ENORMOUS shoes. Chris is actually the percussionist-drummer who plays in Erik’s and my “sometimes” side, acoustic project “Sunset Stripped” in which I sing lead vocals.”
Bringing out about a dozen of our favorites, the set consisted mostly of earlier material like “DRFSR”, “Heaven” and “Uncle Tom’s Cabin.” As expected, these guys still down the house before finishing things off with a slice of “Cherry Pie”. 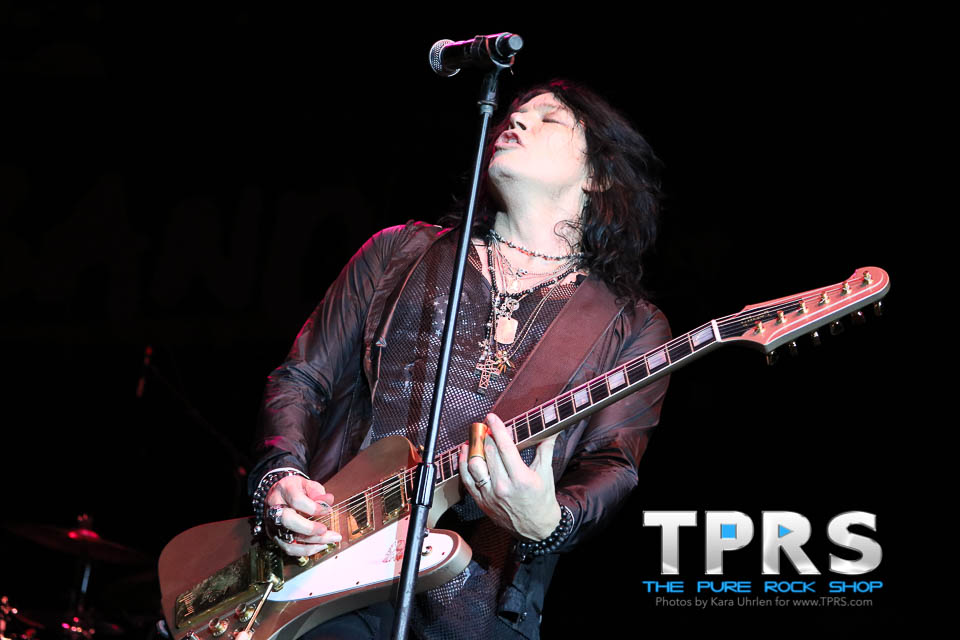 Despite obviously fighting a cold, Tom Keifer sung his heart out belting out of favorite Cinderella songs like “Shake Me”, “Shelter Me” and “Nobody’s Fool,” and performed the title track from his solo album “The Way Life Goes.” And, his set was even lengthened to fill the void of a missing Lou Gramm.
Keifer was joined by the usual suspects Savannah Keifer and Kendra Chantelle Campbell on backing vocals, Billy Mercer on bass, and Tony Higbee on guitar. Missing from the fold were Paul Taylor (must be some Winger band shows happening?) and Paul Simmons who was replaced by Jarred Pope on drums. 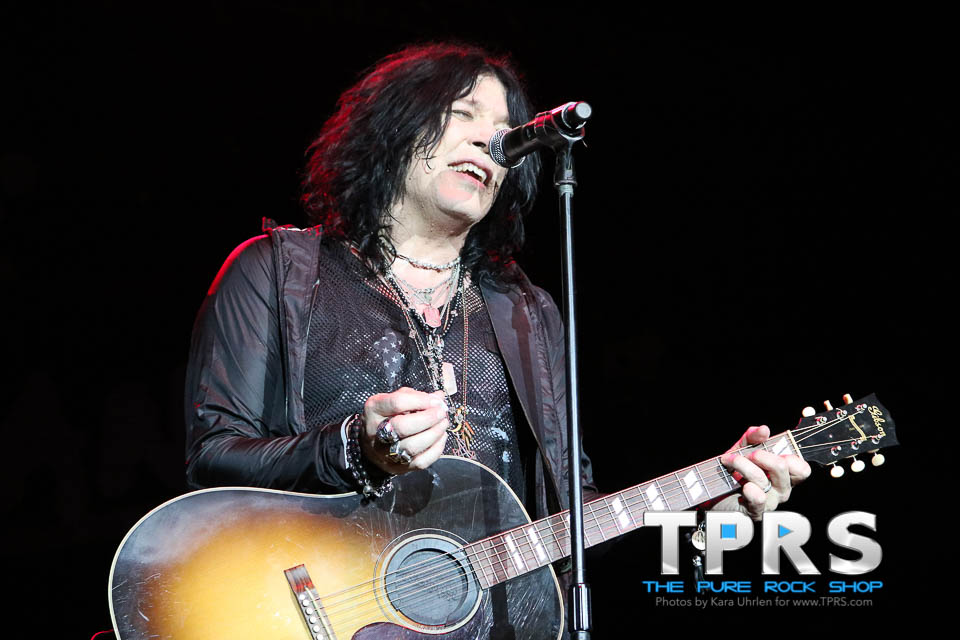 “Don’t Know What you Got (Till it’s Gone)” was an especially touching duet with Savannah as Keifer threw her a sweet kiss as they finished, and before calling it a night and likely passing out from exhaustion backstage, Tom finished out the set with a “little help” from The Beatles and an awesome “Space Oddity” tribute to David Bowie before putting smiles on our faces with “Gypsy Road”.
We called it a day after the Tom Keifer (Official) band’s set with a four hour drive ahead of us and two tired children, but from what we hear, headliner’s Cheap Trick sounded awesome, and we apparently missed the really cool Keifer family moment when Tom, Savannah and their son got to sing “Surrender” with Cheap Trick. I can guarantee was more YouTube worthy than city of Pittsburgh’s tone def Mayor Peduto’s attempt at the classic last summer in Burgettstown, PA.