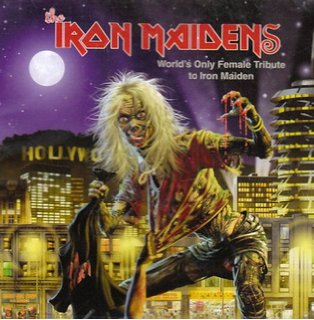 Finally, a tribute CD that is smokin’ end to end and essentially captures the aura of the band being heralded, in this case the mighty Iron Maiden.   Featuring members of Phantom Blue, the Iron Maidens sound dead on to ‘Arry and company throughout most of the disc and rarely take a misstep.

The highlights of the disc include a stellar version of “Run To The Hills”, an emotional “Children Of The Damned” and a “Killers” version of “Hallowed Be Thy Name”.  The Paul Dianno era songs really jump out on this disc making for an album that can be spun multiple times for pure guilty pleasure.  Vocalist Aja Kim breathes new life into Bruce Dickinson era songs like “The Trooper”,”Aces High” and “Wasted Years”.  “The Number Of The Beast” compares favorably with the version Kimberly Goss and Sinergy recorded several years ago.

Admittedly, I had a heavy metal crush on drummer Linda MacDonald when the debut Phantom Blue LP came out and couldn’t get up the nerve to talk to her at Foundations one year (must have been something about a  woman riding an escalator without shoes on that threw me for a loop!).  Nonetheless, The Iron Maidens succeed on the tribute front by having the guts to release an entire album of Iron Maiden classics and doing an excellent job.

The Number Of The Beast

Children Of The Damned

Phantom Of The Opera

Run To The Hills

Hallowed Be Thy Name